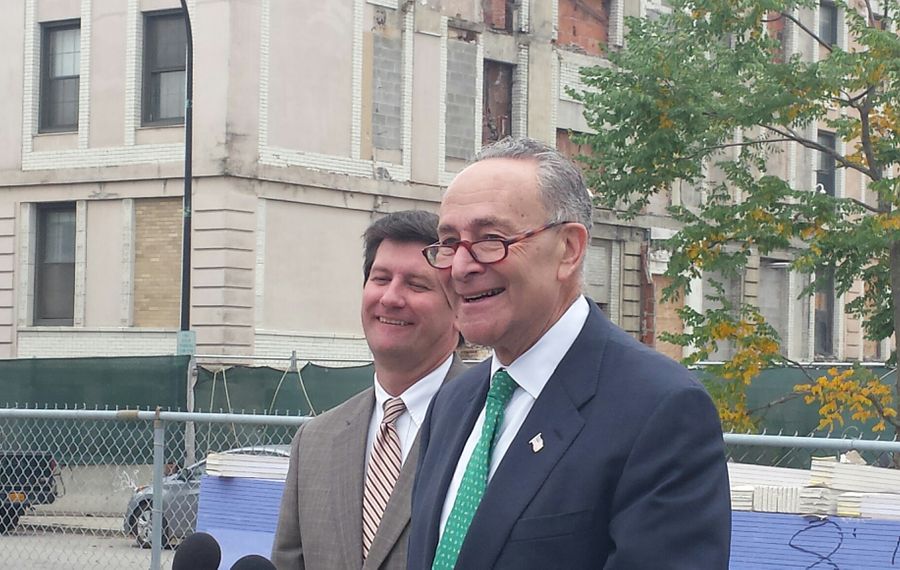 “On behalf of the ECIDA, we thank Senator Chuck Schumer and Erie County Executive Mark Poloncarz for straightening out what has been a decades-long frustration for the ECIDA," ECIDA President and CEO Steve Weathers said. "We look forward to putting this money to work now as it was originally intended-- for economic development-- and helping more Erie County businesses grow.”

Among the specific investments are:

Additionally, projects like the redevelopment of the former Millard Fillmore Gates Circle Hospital property - an ambitious multi-year effort by developer TM Montante and partners to create more than 500 units of housing, plus retail, commercial and community space - can benefit from the increased money flowing to the Revolving Loan Fund. The Gates Circle project is one of the few that already received ECIDA revolving loan support even during the tug-of-war between the federal agencies, with a $2 million loan to help with Montante's demolition of the aging hospital buildings.

"Many years of frustration, unrealized dreams and wasted opportunity can finally be put behind us now that the green light has been given to access funding that will spearhead tremendous economic development throughout Erie County," Poloncarz said. "We will see the birth of projects that will instantly create jobs and also establish long-term careers in a number of different business sectors."

The compromise brokered by Schumer, with support from Erie County Executive Mark Poloncarz, ended a dispute between the U.S. Department of Housing and Urban Development and the U.S. Commerce Department's Economic Development Administration over whose rules should apply to the money that Erie County had placed in the Revolving Loan Fund. The differing and conflicting requirements, which county officials say date back more than 25 years, limited the usefulness and effectiveness of the loan fund and hindered ECIDA from even making loans since 2005.

Erie County established the Revolving Loan Fund in 1979 to make loans to businesses in support of economic development. The fund includes both federal and local dollars, consisting originally of $7 million in EDA funds and $4 million from the city of Buffalo and the county that they originally got from HUD through the Community Development Block Grant program. The city, county and ECIDA also contributed an additional $2.3 million to bolster the fund further. And the fund's total value has since increased, as borrowers paid back the earlier loans with interest.

Originally, federal rules allowed the HUD funds to be used as the local match for the EDA funds. But HUD changed its interpretation, according to Schumer, claiming that the money that the city and county invested is subject to HUD rules, which differed from the Commerce Department's rules and barred their use as matching funds.

Schumer stepped in to negotiate in July 2014, eventually hosting a meeting early this year in his Washington office with the administrator of the EDA and the deputy secretary of HUD. He argued that "bureaucratic red tape and regulatory disputes" should not harm local economic and community development efforts, and then encouraged them to work with Erie County to craft a plan that would free up the money, according to a news release.  He also asked the EDA to allow Erie County to take out the extra local funds that were contributed, to be used for specific projects, while the federal agencies worked out their differences.

“After a decade-long bureaucratic tug-of-war, I’m thrilled to announce that we have succeeded in bringing HUD and the EDA to the table so we could develop a plan to unfreeze these critical funds. Unlocking nearly $17 million in federal funds means we can finally energize potential job-creating development projects in Erie County once again,” Schumer said. “This agreement to a path forward is a real breakthrough and has the ability to transform Erie County – and I will not stop pushing until Erie County residents and businesses can see this money put to work in their community.”