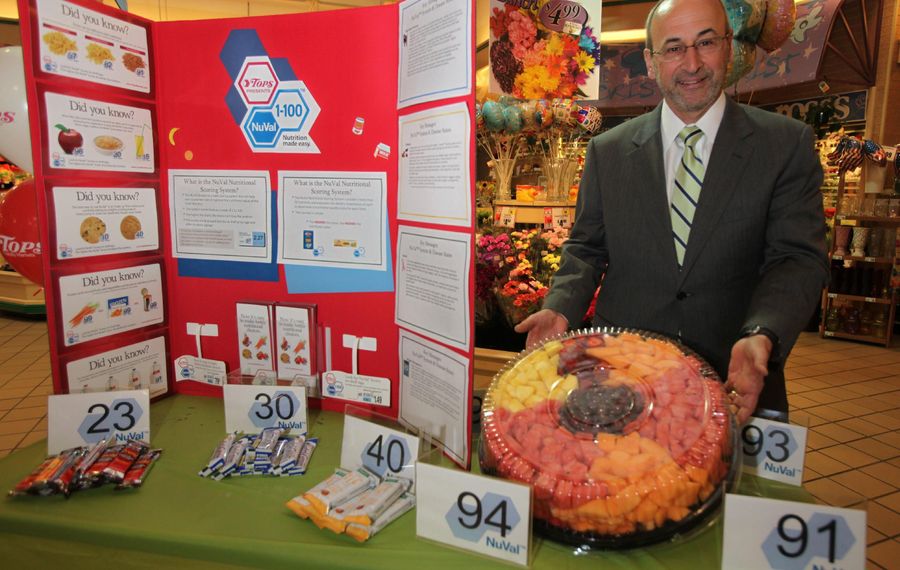 Tops Markets is getting rid of a controversial nutrition ratings system it has used to help customers make food purchasing decisions. The system rates brownie mix and ice cream as healthier than some canned fruits and vegetables.

The NuVal Nutrional Scoring System debuted at Tops in 2011. The system scores foods on a scale from 1 to 100--the more nutritious the food, the higher the number. Each item's score appears on the shelf next to the food's price tag in an attempt to make it easier for shoppers to make healthier choices.

The NuVal score is based on an algorithm developed by a team of scientists from schools such as Yale and Harvard. The process behind the scoring has never been disclosed but the company has said it calculates a food's good elements--such as protein, calcium and vitamins--against its bad elements--such as sugar, sodium and cholesterol. NuVal has said it does not share details about how it comes up with its scores because that information is proprietary. The system is used in more than 1,000 stores in 23 states.

Two other grocery chains have dropped NuVal recently, including California-based Raley's and Massachusetts-based  Big Y, which told the Yale Daily News the system was "out of date."

It comes a full four years after consumer group the National Consumers League filed a formal complaint with the Food and Drug Administration about it, saying it was "fatally flawed" and should be discarded. It blasted NuVal for not being transparent with its algorithm, neither with consumers nor the scientific community.

"NuVal’s so-called nutritional ratings are a travesty that confuse, rather than enlighten, consumers," said Sally Greenberg, executive director of the National Consumers League.

Leonard H. Epstein, a distinguished professor and chief of behavioral medicine at the University at Buffalo medical school, served on NuVal's scientific advisory board. He said he didn't always agree with the creators'  decisions, the system's creators didn't always take the board's advice and that, if he had been one of the system's makers, he "would have done things very differently."

Consumers may find NuVal helpful if their diet is based on general USDA guidelines, Epstein said, but not if they prefer other diets, such as ones high in protein and low in carbohydrates, for example. And anomalies are to be expected.

"If you don’t believe in the criteria that NuVal uses, then the algorithm would not work to guide you to healthier eating," he said.

In order to be useful, algorithms have to change to reflect changing science, he said.  A shift in emphasis from fat to added sugar in the diet is one example.

Tops said its decision to drop the NuVal system wasn't based on criticism or controversy surrounding NuVal but on customer feedback. As part of an annual evaluation to make sure its programs are relevant, it found there was no increase in customer participation with the program, so the company made the "hard decision" to bring the program to an end.

"Our decision was not based on any issues or changes with the NuVal nutrition scoring concept or the program itself," said Kathleen A Romanowski, a Tops spokeswoman.

Tops said it will phase the program out by the end of the year, when it will be replaced by a new nutrition initiative. The grocer declined to share details about the new initiative.