Carl and William Paladino's Ellicott Development Co. is proposing a trio of reuse projects in and around downtown Buffalo, planning a mixture of commercial and residential space in each as it works to bring the vacant buildings back to life.

The three historic renovation projects, each of which will come before the city Planning Board for consideration, would create a total of 18 new apartments and several floors of new office space on both the east and west edges of the city's central business district. Ellicott is working with the State Historic Preservation Office on all three projects, which would qualify them for lucrative state and federal historic tax credits to finance the combined $18.8 million price tag.

First, the developer is proposing to convert a vacant six-story building at 270 Michigan St. into a mixed-use facility, with new commercial space on the first three floors and six market-rate apartments on the upper three floors. The long and narrow building, with yellow architectural diamond features along its roof line, is part of a larger 177,000-square-foot multi-building brick complex that sits on 2.5 acres at the southwest corner of Carroll Street and Michigan, just south of Seneca Street. Besides the taller building, the complex also includes a three-story structure along Michigan but closer to Seneca.

The first building in the complex dates back to about 1900, when it was constructed for Buffalo Envelope Co. Currently, the complex offers warehouse and first-floor storefront space. The smaller building is the longtime headquarters and Buffalo office of Region 9 of the state Department of Environmental Conservation, but there is significant vacant space in the taller building. It's also been under DEC monitoring for potential contamination, according to documents filed with the Planning Board.

The $5.03 million project, designed by AP Architects, calls for restoring the building's exterior, including masonry repairs and replacement of all windows with new historically accurate units. Crews will also put a new storefront entrance on the building's south side.

“We are excited about bringing this vacant building back to life and believe that the adaptive reuse of the building will add to the vibrancy and rebirth of the Seneca Street corridor,” said Tom Fox, Ellicott's director of development, in his letter to the Planning Board. The project needs both zoning variances and Planning Board approval. 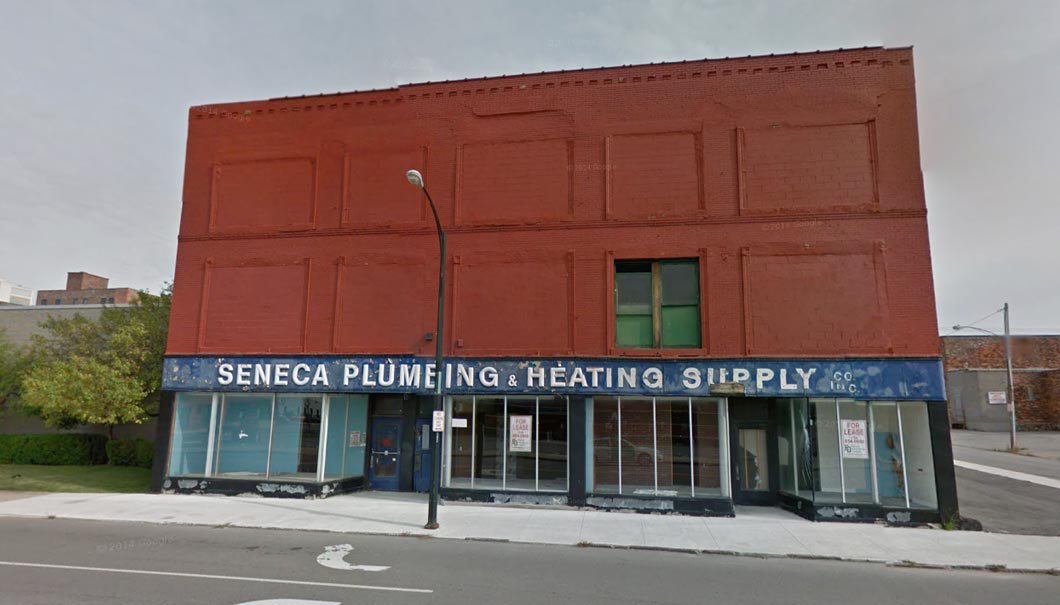 Just around the corner, Ellicott's second pending project envisions the renovation of the former Seneca Plumbing & Heating Supply Co. building at 192 Seneca St. The vacant three-story building, constructed in 1900, sits on the north side of Seneca at Butler Place. Seneca Plumbing had been there for over 75 years but moved out and Ellicott acquired it in 2011, for $449,600.

Plans for the $4.4 million project call for commercial space on the first and second floors, with four market-rate apartments on the third floor. Workers would repair the masonry, reopen blocked-in original windows on the north and south sides of the 15,750-square-foot building, and create new windows on the east and west walls. Ellicott also plans to resurface and restripe the existing rear parking lot at 204 Seneca St. on the east side of Butler, to create 45 parking spaces.

The 0.158-acre project again needs both Planning Board approval and zoning variances.

Finally, on the other side of downtown, Ellicott wants to renovate a vacant three-story building at 1050 Niagara St. into a blend of medical office space on the first and second floors, with eight apartments on the west end of the basement and subbasement levels, where a change in the grade of the land exposes those levels above ground.

The 52,623-square-foot commercial and industrial building sits on 1.09 acres on the west side of Niagara, sandwiched between that street and the Niagara Thruway next to the river. It dates to 1930, according to city records, but the property has been used for commercial and industrial purposes since at least 1889 by various companies, including the Niagara Lithograph Co. and the Miken Companies, two commercial printers. Ellicott bought it from Ciminelli Real Estate Corp. in 2008.

The two properties and a third adjacent parcel make up a combined 2.7-acre area that is under an ongoing state-supervised brownfield cleanup.

Plans by AP Architects, with assistance from Carmina Wood Morris PC, call for restoration of the red brick building's exterior, including masonry repairs and restoring window openings that had been filled in with masonry, by installing new historically-accurate units. Workers would also construct two small additions on the building's north side to serve as entryways for tenants, while the existing parking lot at 1088 Niagara would be expanded to add 45 parking spaces - including two for handicapped.

The $9.4 million project requires both Planning Board approval and zoning variances.