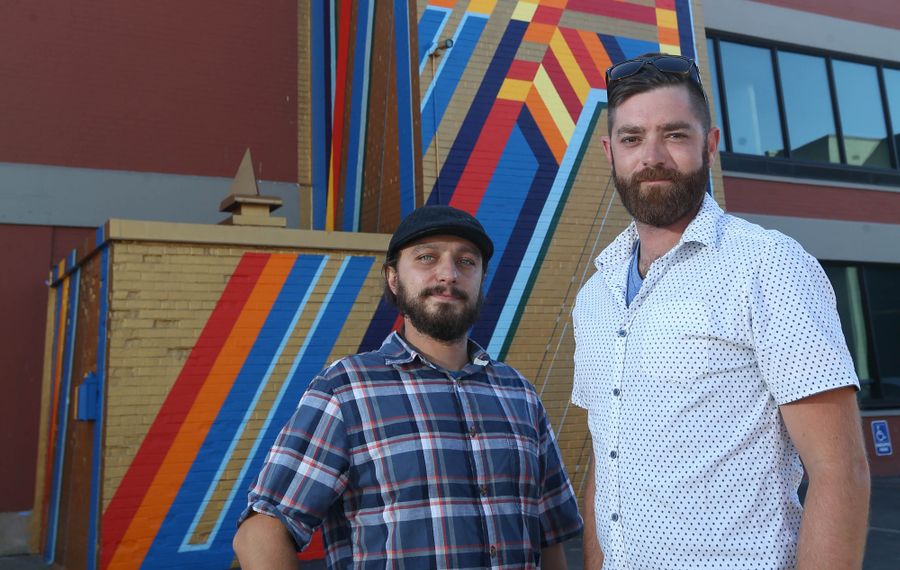 On a quiet stretch of Halbert Street in the Fillmore-Leroy neighborhood, a tower of gold-painted bricks rises above a former warehouse in the shadow of a former factory.

The former warehouse is now a renovated office building.

The former factory is now a bustling center for art and business.

And the formerly anonymous tower of crumbling bricks, recently drenched in almost 10 gallons of Nova Color gold paint and overlayed with a razor-sharp network of shapes and lines by Buffalo artists Nicholas Conrad Miller and Christopher Kameck, is now the canvas for Buffalo's most arresting new mural. 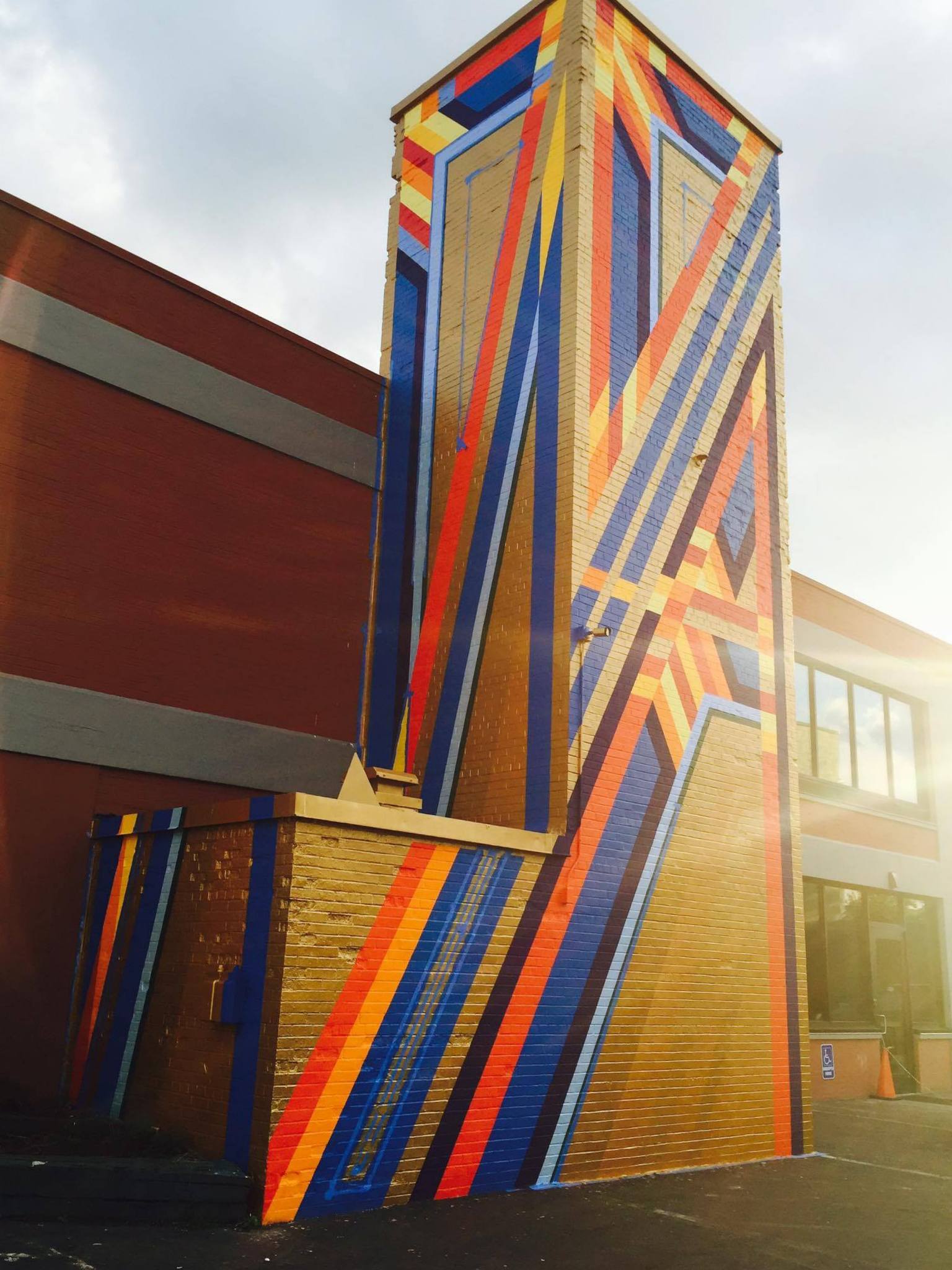 Team Razor Wire's "Tower of Power" is coated in reflective gold paint that glows in the early-morning and late-afternoon sun. Photo courtesy of Nicholas Conrad Miller.

Along with Daniel Galas' nearby mural on the side of Koch Metal Spinning, it's also the latest symbol of the function public art is serving in once-dilapidated neighborhoods: As a signal that life -- both human and economic -- is returning after decades of decline.

In the early-morning or late-afternoon sun, Miller and Kameck's "Tower of Power" becomes a glowing beacon visible from blocks away. It commands the attention of pedestrians making their way to the new headquarters of the Buffalo Federation of Neighborhood Centers. And it signals the arrival of a new, homegrown style of public art, courtesy of Team Razor Wire, the easily hash-taggable name Miller and Kameck have chosen for their collaboration. 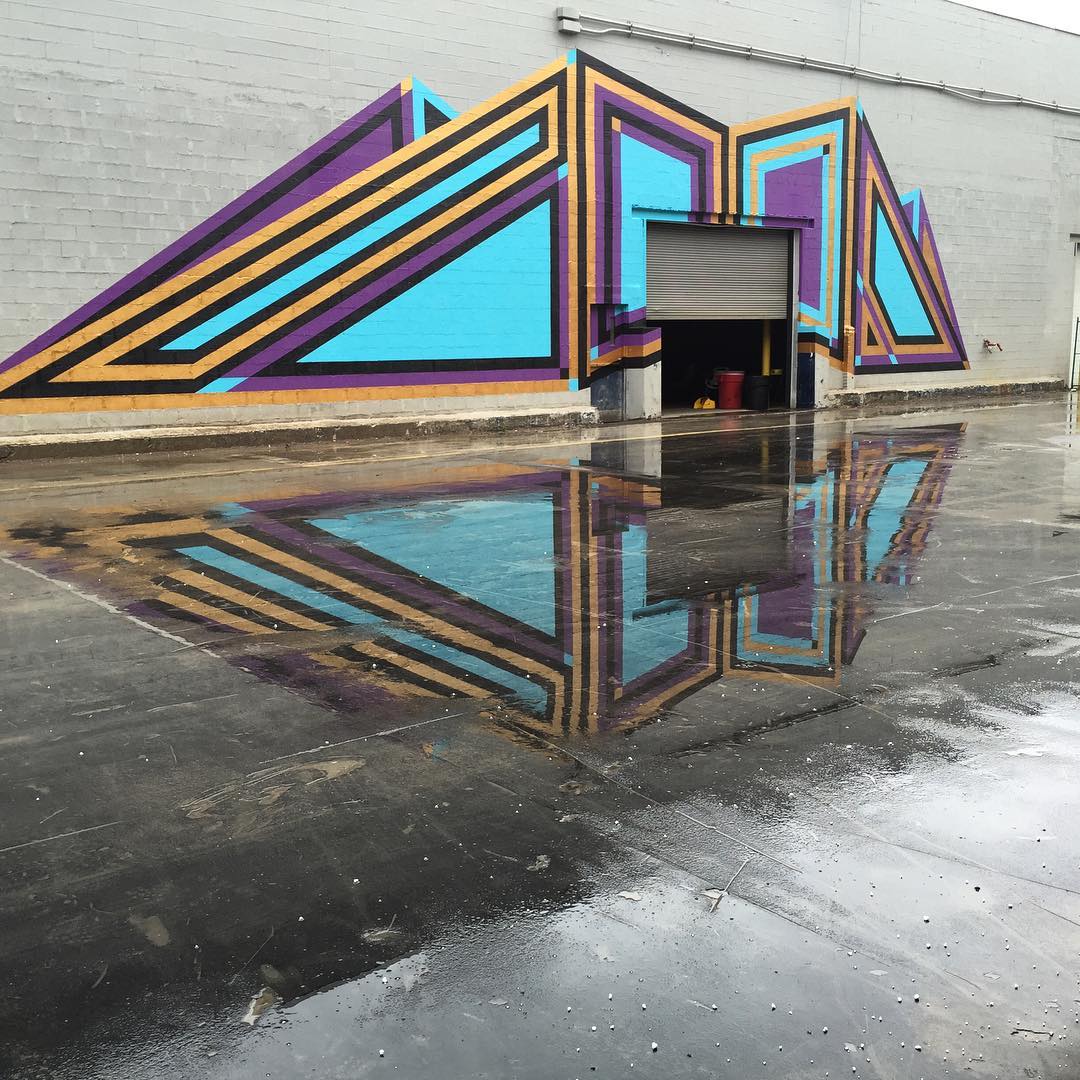 "Advantageous Geometry #1," on the side of OSC Manufacturing and Equipment Services on Buffalo's East Side, was the first project of Team Razor Wire. It was created for the 2016 Echo Art Fair.

Miller, a recent Buffalo transplant, met Buffalo native and street artist Kameck last year while while working on a more traditional mural project in the Old First Ward. Since adopting their name, based on the razor wire they had to work around to complete that first project last fall, they've had a busy summer.

The first official project in Team Razor Wire's "Advantageous Geometry" series was a simple but jarring number on the loading dock of OSC Manufacturing and Equipment Services on East Delavan Avenue timed to coincide with the 2016 Echo Art Fair. Next was a piece for the side of Black Iron Bistro in Blasdell, which features the outline of an anvil containing a network of triangles in a color palette of black, gold and red.

After those two early successes, Kameck and Miller launched a community initiative with the help of the University Heights Neighborhood Association that resulted in the transformation of a brick building at the corner of Stockbridge and Bailey avenues into a vivid abstraction of the stock market.

That project, funded by a small grant from the New York State Council on the Arts that was administered by Arts Services Initiative, involved dozens of community residents who participated in several craft days and helped with the painting process.

"It was a great opportunity to get to know the neighborhood more," said Miller, who moved to Buffalo in 2015 after working as a muralist in Austin, San Francisco and Philadelphia. "It progressed into this great conversation about what art is and what it would mean to have just one color as opposed to multiple colors on a wall."

Because of that process, Miller said, the end result had buy-in from the entire community. The same goes for a mural on the side of the WASH Project on Massachussetts Avenue (not part of the growing Team Razor Wire repertoire) that he completed last summer.

The duo also created what they called a "mobile wall mural" for the monthly Allentown First Fridays gallery walk event in September, for which they invited participants to help them paint the mural. 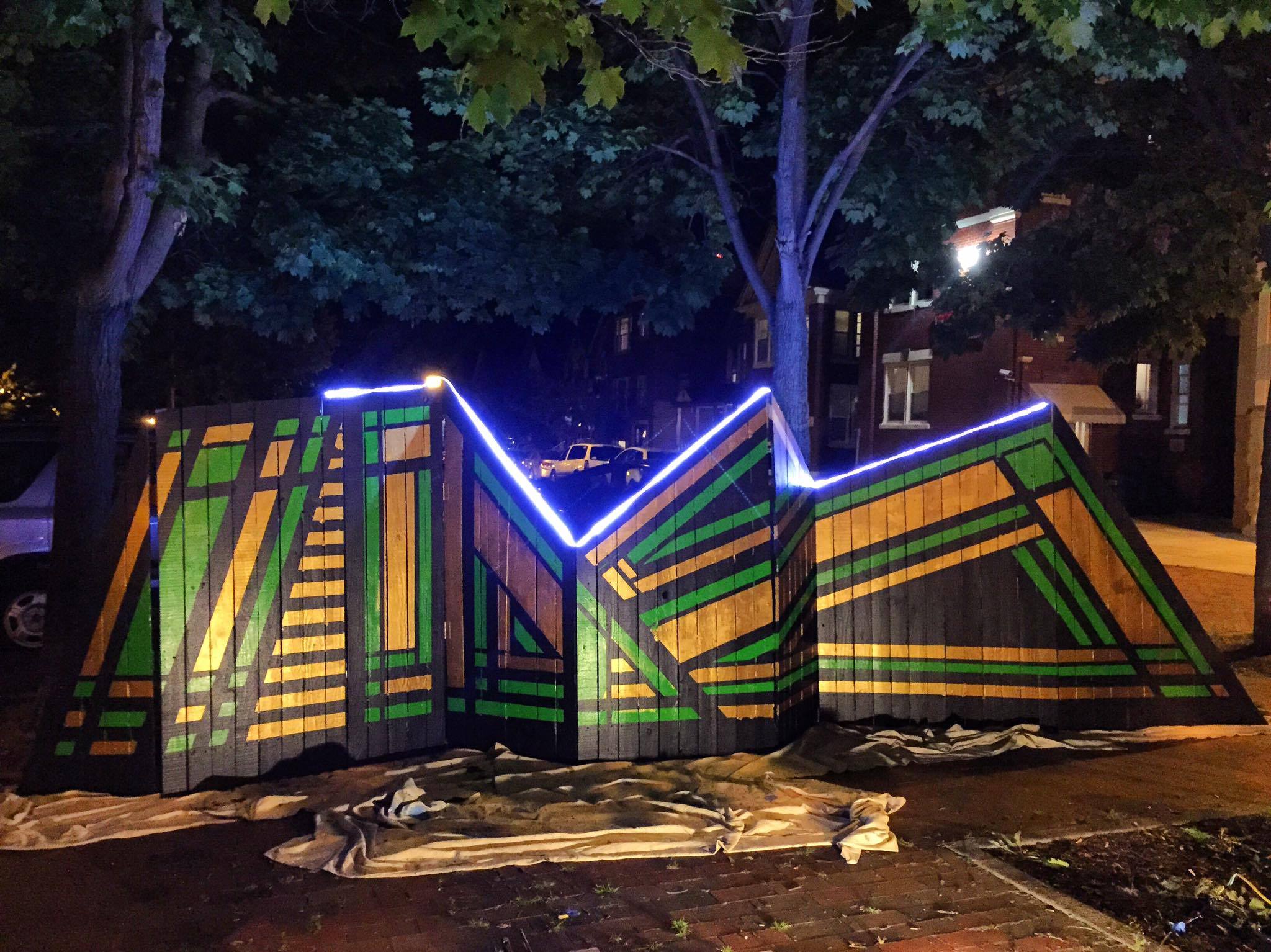 The abstract, geometric style of Team Razor Wire stands in stark contrast to most other local murals, which tend to feature figurative images or literal landscapes. Their sharp angles, bold colors and graphic style were seemingly engineered for the Instagram era.

The team's approach, Miller said, evolved from his own mural style, which has grown much more abstract and hard-edged since he moved to Buffalo.

"These play on the idea of color bouncing your eye throughout the composition," Miller said, adding that he and Kameck also focuses on "line quality and line direction, which forces your eye to never really rest on one space, but constantly be searching through the image."

That is certainly the case with "Tower of Power" and the Bailey Avenue project "Stocks Are Rising," both of which feature lines that you can easily imagine extending infinitely into space -- much like a Robert Mangold painting.

More than refining their aesthetic approach, what motivates Miller and Kameck more than anything else is the ability mural-making affords to work with communities previously devoid of public art to produce projects that are relevant to neighborhood residents.

That was the case for the "Tower of Power" project, sponsored in part by Buffalo Arts Studio and developer Matt Wolfe. As part of the project, Wolfe, Miller and Kameck met with staff from the Buffalo Federation of Neighborhood Centers and other occupants of the building to which the tower is attached.

"The idea was just to ask them what their organizations stand for, what they do, who they are, who the people are who come here every day," Miller said. "Who’s going to be the audience for this particular design? That helped feed into this uplifting, this very strong, powerful, bold symbol."

The community's reaction, so far, has been strong. Clients making their way into the building on a recent Friday afternoon smiled when the looked up at the tower. A neighborhood resident who had watched the project unfold slowed his car to a crawl and yelled out to the artists that they'd done a great job.

"And that’s kind of the great thing about doing public art," Kameck said. "It influences a lot of people who don’t normally make it to galleries, and they go home and have conversations about how that made them feel. That’s a great feeling."

The same goes for young neighborhood residents in Buffalo's less fortunate neighborhoods, where pops of freshly painted color and points of pride can be few and far between.