In training, the 6'3 Senegalese forward has gotten grief for his reluctance to shoot with his left foot. During the second half of Buffalo State's 2-1 win over Plattsburgh on Friday at Coyer Field, Sarr quieted his critics.

A clever short pass from left winger Tristan Myers allowed the long-striding Sarr to careen toward goal, and the SUNYAC's leading goal scorer made no mistake placing the eventual game-winner inside the right post.

"I've been working on my left foot shot - I've been getting made fun of at practice for [struggling with it]," Sarr said after the match. "When I got the ball I didn't think about it, I just hit it on the goal." 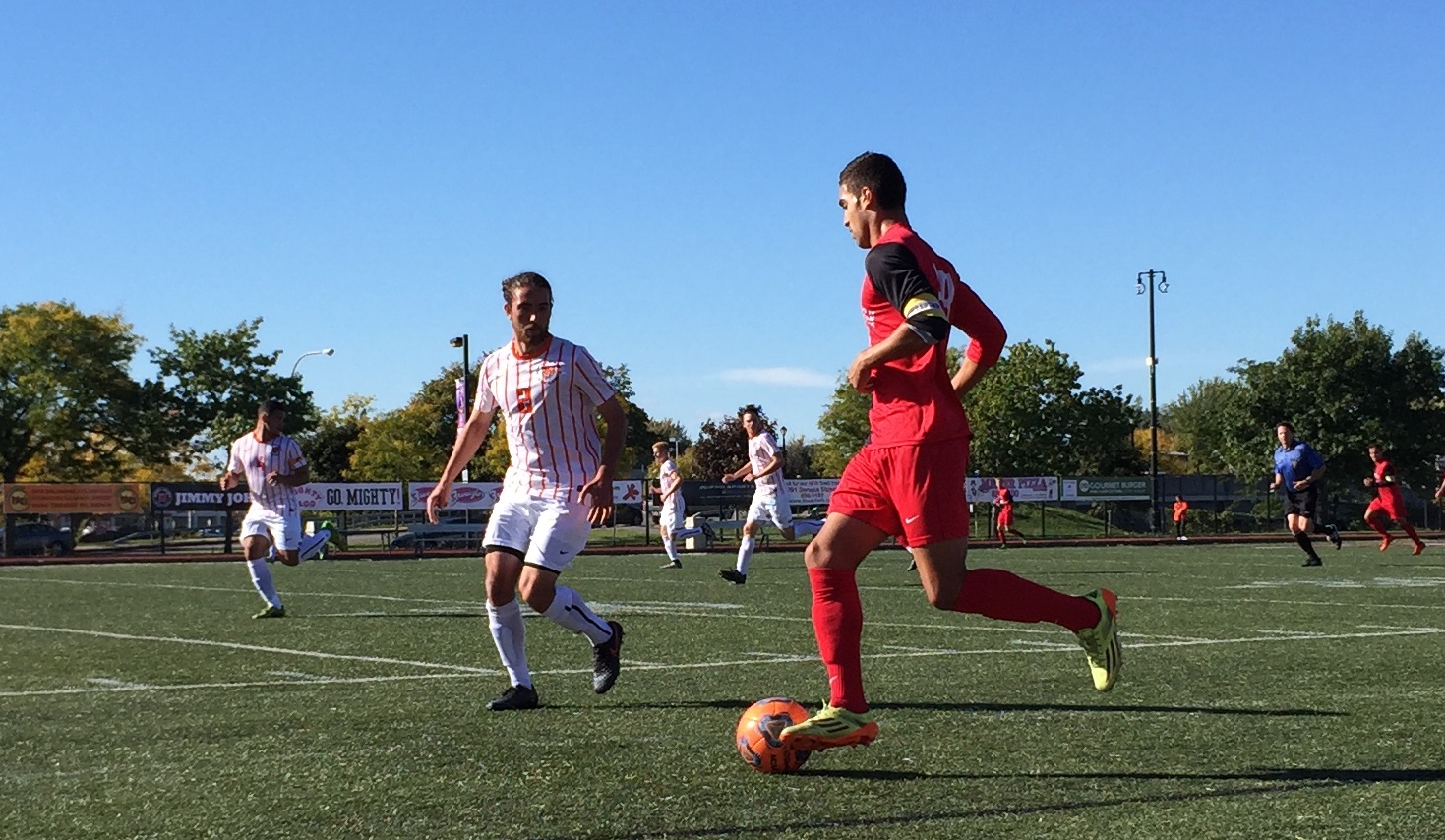 The tally was the sophomore's 11th goal in 11 starts for Buffalo State this year, giving Sarr a comfortable edge over the SUNYAC's second leading scorer, Cortland's Nick Tata, who has seven goals.

Bengals center back Drew Braun opened the scoring in the 34th minute, leaping over Plattsburgh defenders to win Sammy Wasson's curving corner kick before powering the ball into the back of the net.

A shaky sequence between Braun and Buffalo State goalkeeper Will Banahene gifted Plattsburgh's Alexis Archilla the equalizer four minutes after halftime, but Sarr's 61st-minute deposit propelled Mark Howlett's side back in front for good.

BAD BLOOD: No, Buffalo State vs. Plattsburgh doesn't quite meet the intensity level of the Battle of Lake Erie, but it's coming close. Chasing the game late, the Cardinals became increasingly frustrated with Sarr, who they believed fell too easily upon contact, trying to draw fouls to stall the game.

Tempers flared further when Tristan Myers slid in cynically at midfield after Sarr was dispossessed, prompting meltdowns from the Cardinals' Ian Spear and Nick Economou, as well as a fracas involving both teams in the middle of the park. Four yellow cards were doled out, two to each side, and words were exchanged long after the final whistle.

PROTECTING THE LEAD: Buffalo State didn't have to dodge too many scary moments over the last half hour, as Banahene was called upon for only two stops over that span. Holding midfielders Barak Benyehuda and August Finn, dropping back to fill in for an injured Sammy Wasson, did well to break up attacks with their physicality and activity, while center back Danny Clavin turned in a strong outing.

"Nobody is going to come here and get a 'W' that easy," said Sarr about how the Bengals held on. "We're going to go at them hard and play harder than them."

WHAT IT MEANS: Buffalo State improves to 4-2 in conference play, slotting them alone in third place behind Cortland and Oneonta. The three points Friday were a boon to the Bengals' playoff chances, too.

"It's massive," commented Howlett on the significance of the win. "In history, 12 points is playoff-good, and we've still got three games to play. We've never been in this spot before - this is a barrier we've been fighting to get over.

"Last weekend at Cortland, we play extremely well and our own mistake leads to a goal, but this week we've actually matured - yeah, we sat back the last 10, but we sat back for a reason and we defended with intent, and this is a massive barrier for us broken down." 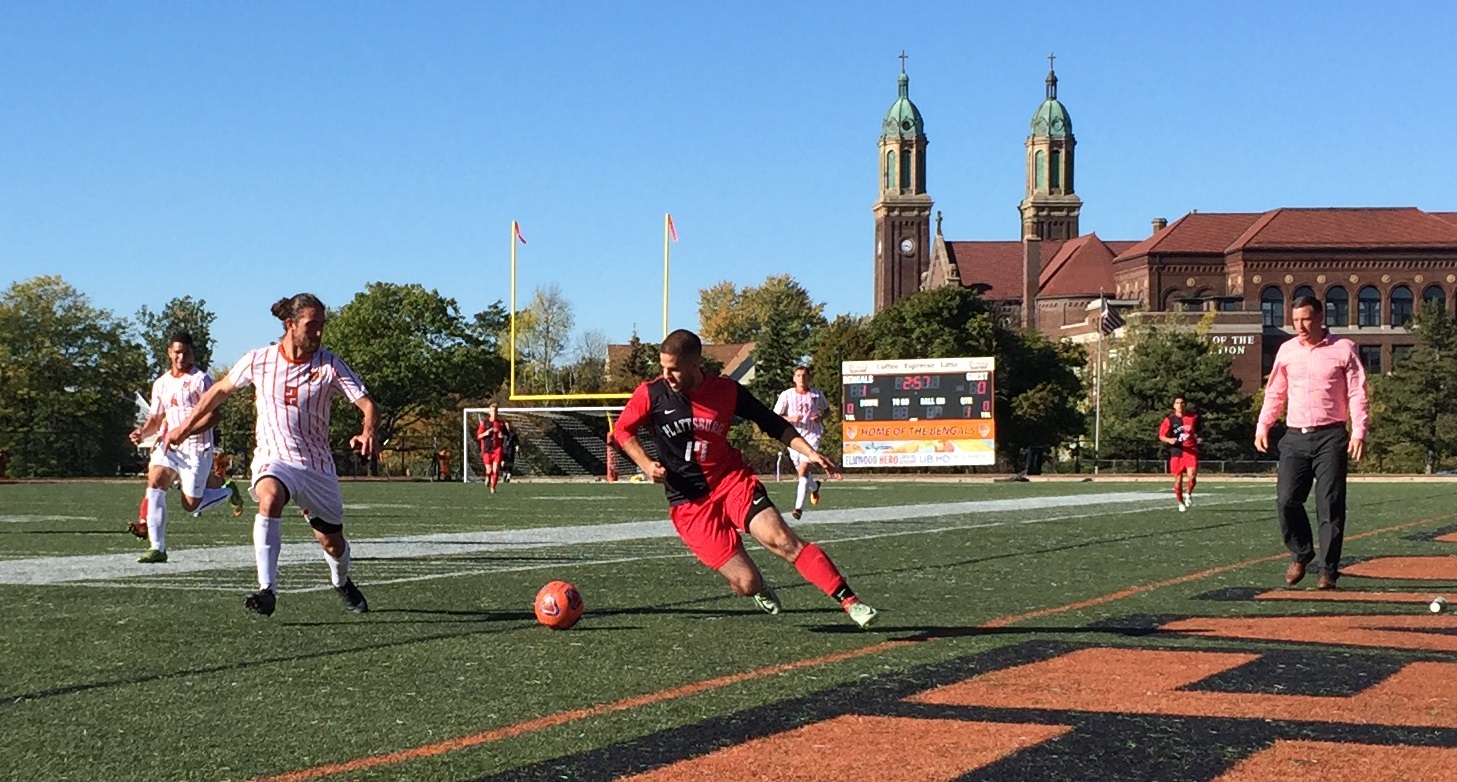 Buffalo State hosts Potsdam, which just knocked off Fredonia, 2-1, for a 1 p.m. kickoff Oct. 15, before hitting the road to face Oneonta and New Paltz next weekend.

"I'm so proud of what we've done and where we've come from - it's big to us, it's a big win for us," Sarr added. "We're going to keep our heads up and go into tomorrow - tomorrow's game is all that matters right now."

If the Bengals finish in the top two of the SUNYAC, they'll receive a bye into the semifinals, held at home Nov. 2; if they finish third or fourth, they'll host a playoff game at Coyer Field on Oct. 29.

"It's the theme of our season," Howlett said, sighing. "Pavone in our first game, Vic Powell halfway through, and Junior Geegba halfway through as well - we've got three guys out for the season, and Drew Johnson's hand is now broken, so we'll see about that, and Sammy [Wasson]'s knee is really bothering him.

"But, like I said at the start, people step up, people are ready for their time and they've been training with these guys day in and day out, and they can prove they can play at this level."

Buffalo State's Sammy Wasson is attended to on the trainer's table in the second half. (Ben Tsujimoto/Buffalo News)

MORE PRAISE FOR SARR: "For me, [Sarr] is one of the best players in the conference hands down, as a sophomore. He's proved that today. He's a handful - up top we had one against four, and they couldn't handle him. That's what he brings. I think he gets fouled more than calls get called for him, and he fights through that. That's a conference player of the year goal right there." - Mark Howlett, Bengals head coach

Email Ben Tsujimoto, who's giving his iPhone battery a yellow card, at btsujimoto@buffnews.com