The Grange Community Kitchen owners Brad and Caryn Rowell could have made things easier on themselves by buying their ingredients from one or two large food distributors after they opened their restaurant in June. Instead, they took a road less traveled, and far more familiar, choosing mostly to work with farmers near their new dining hub on at 22 Main St. in the Village of Hamburg.

The couple, both Hamburg natives, started planning the Grange during the summer of 2015, when their daughter Louise was born. “We decided to have two babies at once,” said Brad, 36, a graduate of the French Culinary Institute in New York City who has worked at top restaurants in Manhattan, Denver and Boulder, Colo., as well as Daniel’s, Park Country Club and Elm Street Bakery closer to home.

Q. What is your restaurant philosophy?

We want people to be comfortable. Our goal is to serve fresh food that is healthy and tasty and prepared properly, with tons of local ingredients. We more so gather it and figure out what we can do with it rather than say, “This is what we want to do, let’s go find it.” That’s how the menus are created. That was the concept. We figured that if we wanted it, our friends would want it.

Q. What are some of the popular vegetables people can find on your menu right now? 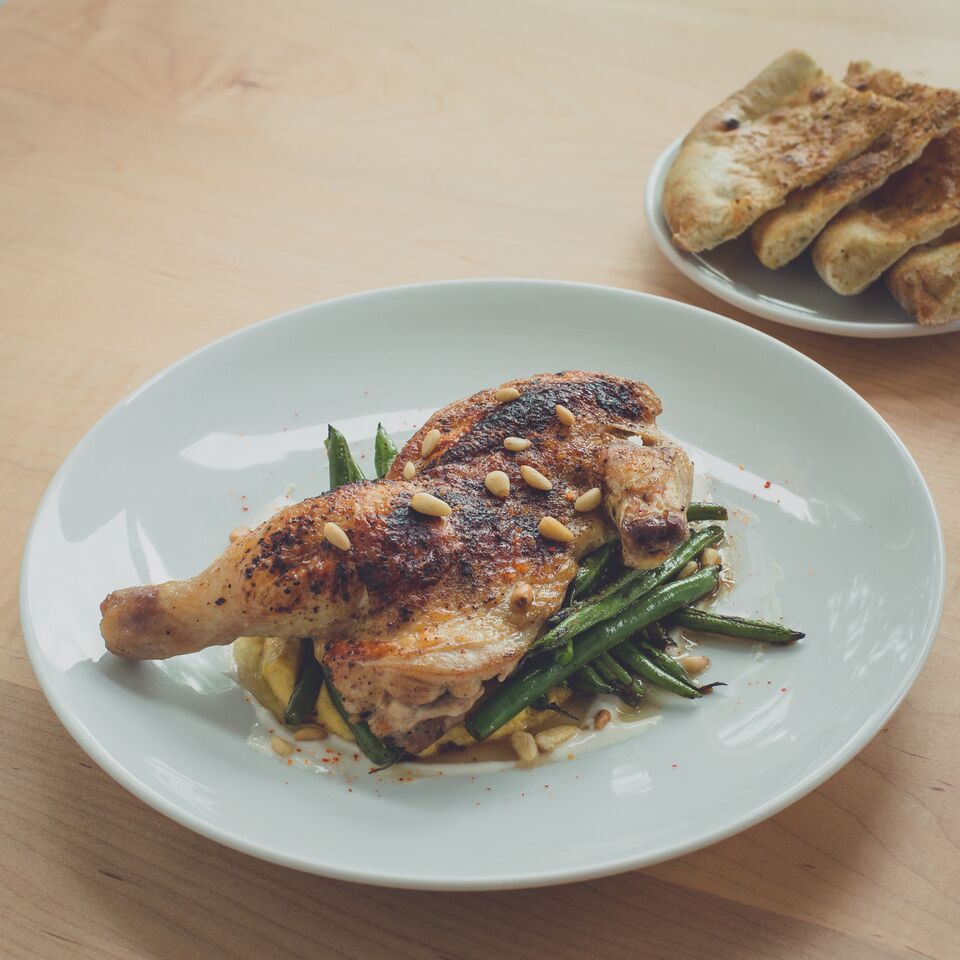 The Grange buys its vegetables locally, as wel as its poultry.

We have cauliflower coming in season. There’s about seven varieties of squash available. We have celery root coming in. Tons of root vegetables. A lot of the stuff that’s starting to come in now is available into the spring, which is really nice. A lot of these things are storage vegetables that you can use for many months. Tomatillos are still going well. We’re getting these inca berries, which are called ground cherries as well. They’re coming from Arden Farm in East Aurora. They come in a husk, like a tomatillo would. They look like a small cherry tomato but have a fruity, almost candy-ish flavor to them. We do a dessert with them and put them in a salad as well. They’ll be around for a little bit longer. Then you’ll be seeing parsnips, sunchokes – or Jerusalem artichokes. We’ll be using lots of squashes, turnips, rutabaga, radishes, green tomatoes. We have about four dishes that use green tomatoes. Those tomatoes are not going to ripen once it starts getting cool, so we’ll pickle them and use them on our burger. We slice them thin and pickle them like a bread and butter pickle.

Q. Where to you get the ground meat for the burger? 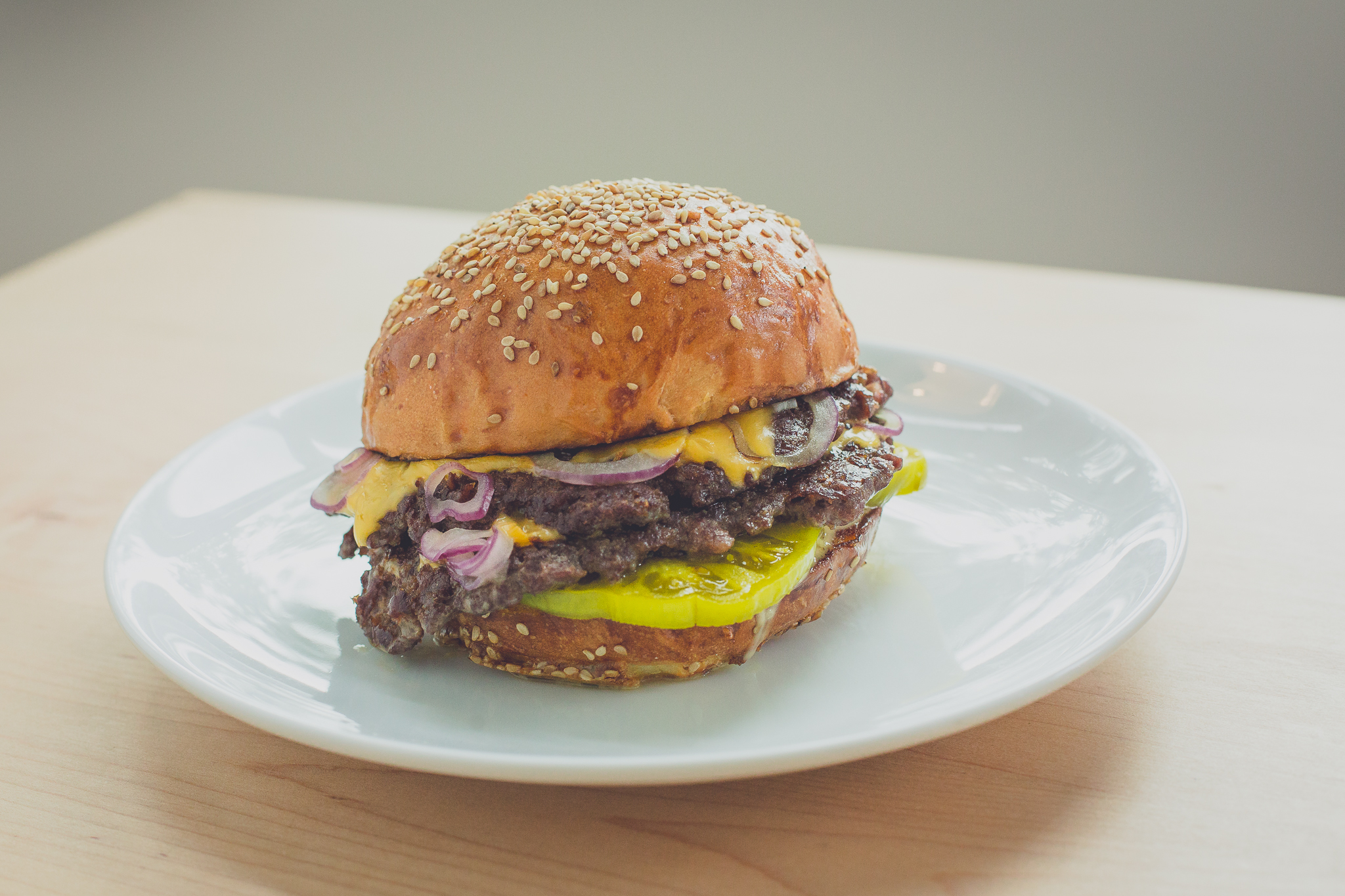 Plato Dale in Arcade has been our main provider, but they can’t keep up with all the demand so we get some from Preischel Farms in Eden and from Erba Verde Farms in Marilla; we get our chicken from Erba Verde, too. These guys are doing it right, free-range, grass-fed.

Quality is the first reason. You can’t get better stuff, most of the time. ... A big part is the economic impact for the area, keeping our money local and supporting people who are following their dreams and support their families, just like we do. It’s also friendlier to the environment.

Q. Can you talk about how your supply chain works?

One of the reasons many restaurants don’t do what we do is that it’s a ton more work. You could take one big box from a food distributor, get all your food from them by going online and typing in an order. It takes five minutes. For us, it’s a lot more work. Stuff can go out of season halfway through the week but we’ll see what’s available. We’ll say, “Hey, we can get this eggplant, let’s run this Babaganoush dish. That’s a whipped eggplant spread that we use with a Lebanese bread, kind of like a pita, and you dip it and eat it. There’s also pickled and fresh vegetables on it. We do that kind of with everything. We have chido mushrooms from Weiss Farms about five miles up the road in East Eden.  We grab those and put them on the menu. The sauce we make with them also has heirloom tomatoes and bell peppers that we roast and then puree. Those also come from Weiss.

Crispy potatoes, we go through on average at least 200 pounds of potatoes a week. We source about 90-plus percent from Thorpe’s Organic Family Farm outside East Aurora. We want small potatoes for it and we’re in contact almost every other day. One of our cooks lives out in East Aurora, so he goes up to where they are in South Wales and picks them up.

We do pizzas. Right now, summer squashes are still in. Same with bell peppers and spicy peppers, so we do a sausage pizza and roasted tomato pizza. We’re going through a ton of tomatoes every week. I get them from Root Down out in Clarence. They deliver on Tuesday. Thursday, we assess and lots of times need more tomatoes. We get those from Weiss. A farm called Plato Dale in Arcade delivers to us on Thursday. They’re a big farm and sell to a lot of the newer, more well-known restaurants in the area. They text me on Monday and I text them back what I want and they deliver on Thursday. We sometimes have to run up to Weiss because they’re up the road. We might get stuff from Ray Miller’s. They get some stuff from Eden Valley Growers. It’s non-stop with the coordination.

On Saturday, we place big orders thinking it’s going to get us through the week. It never does.

Our large plates, we’re dealing a halibut dish using corn puree. We’re using local corn; we’re close to Eden. We’re using local tomatoes, as well. Roasted peppers on the pork chop, summer beans on the chicken. We look at what’s available and how we can compare these things the best possible in a nice, fresh way.

Q. How would you describe this restaurant?

A casual seasonal café, a place where people pop in all day. People stop in on their way to work and grab a coffee or pastry or breakfast sandwich. We get a lot of groups of ladies in the morning having coffee and catching up. Lunch, there’s a lot of people coming through. We definitely have seen a change in demographics since school started. There’s a few more retirees, a lot of local business people coming in for lunch. We called it The Grange Community Kitchen because we wanted it to be kind of like a community center. We live about three blocks from here, so being residents of the village we wanted something like this in the village. We wanted people to come through.