Can’t sleep? Upset over something? Cheer up by remembering this:

The lights are on at Paula’s Donuts.

Someone at this 20-year-old doughnut emporium is working through the night, handcrafting something that can make your morning a lot sweeter.

All shifts work at Paula’s, to get ready for that 5 a.m. opening time. On Sunday mornings, lines can stretch out the door.

“These doughnuts absolutely rank with some of the best I’ve ever had,” rhapsodized Food TV’s Alton Brown. “More specifically, their sour cream old-fashioned absolutely hits the mark. They’ve nailed it.”

Some restaurants have a maitre d'. Paula’s, now with locations in the Town of Tonwanda, Clarence and West Seneca, has a better greeter: the irresistible aroma of sugar and fat.

On a Monday morning, the Sheridan Drive location in Tonawanda was hopping. Peeking into the kitchen, two of us from The News saw activity everywhere. Industrial trays held rows of such venerable local favorites as the Bavarian cream and the peanut stick. Workers with huge rolling pins wrestled with thick slabs of dough. Deep fryers bubbled. In the middle of the crowded room, a heavy-duty, made-in-USA Hobart mixer was flinging about a giant ball of dough. 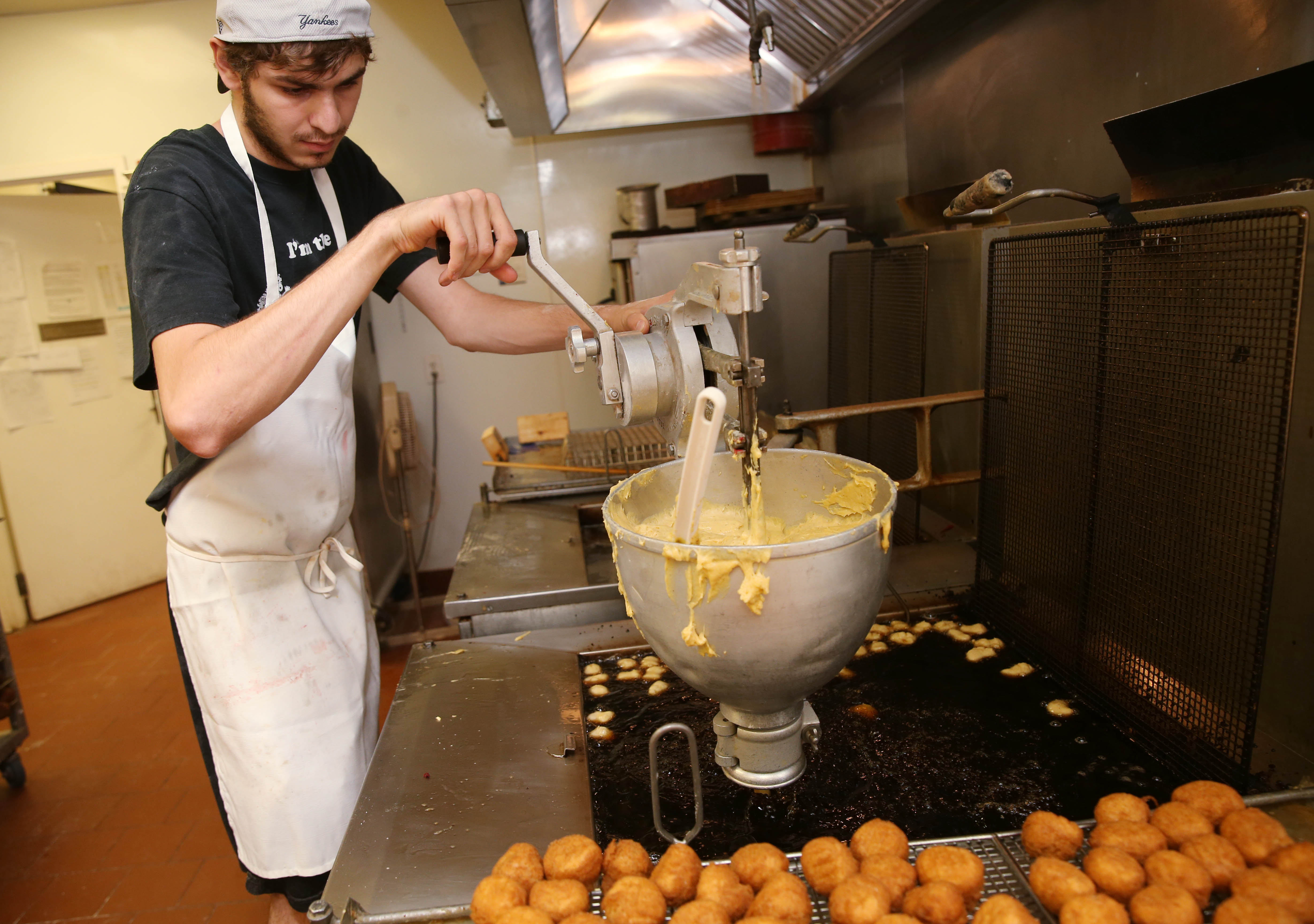 David Calleri uses the hopper to drop four doughnut holes into the oil at a time. (Sharon Cantillon/Buffalo News)

What happened, we asked timidly, if the Hobart broke down?

Like Kate Middleton marrying into the House of Windsor, Bryan Hoppel married into Paula’s Donuts. He married Paula’s daughter. Now, he speaks doughnut fluently – and after a few minutes, so did we. Shell doughnuts are doughnuts that will be filled with something. Ring doughnuts are dipped in a variety of glazes.

And with what a process. A metal tub holds a 6-inch deep pool of white glaze. Freshly fried doughnuts are dunked in it and a worker with plastic gloves tosses and turns them until finally, they’re coated just right. They drip-dry on a rack until they can be handled without making a mess. Then, within minutes, they’re shipped out to the display case.

Paula’s hand-cuts 95 percent of its doughnuts, Hoppel said. The remaining small percentage are doughnut holes cut by the hopper. The hopper – more doughnut lingo for you – is a kind of funnel that swings out over the deep fryer, piping doughnut holes into the oil. Then a flat metal net sweeps out and submerges them.

Wonder washed over us: So this is where it all happens. Angel creme filling, made according to a secret recipe, filled a huge tub. The tub needs refilling six times a day, because the chocolate-frosted angel creme is one of Paula’s signature doughnuts.

A sheet on the wall, headlined “Sprinkles 2016,” gave the colors for every week. (This week was all about orange, gold and chocolate.) An ancient boom box, caked with flour, churned out oldies. 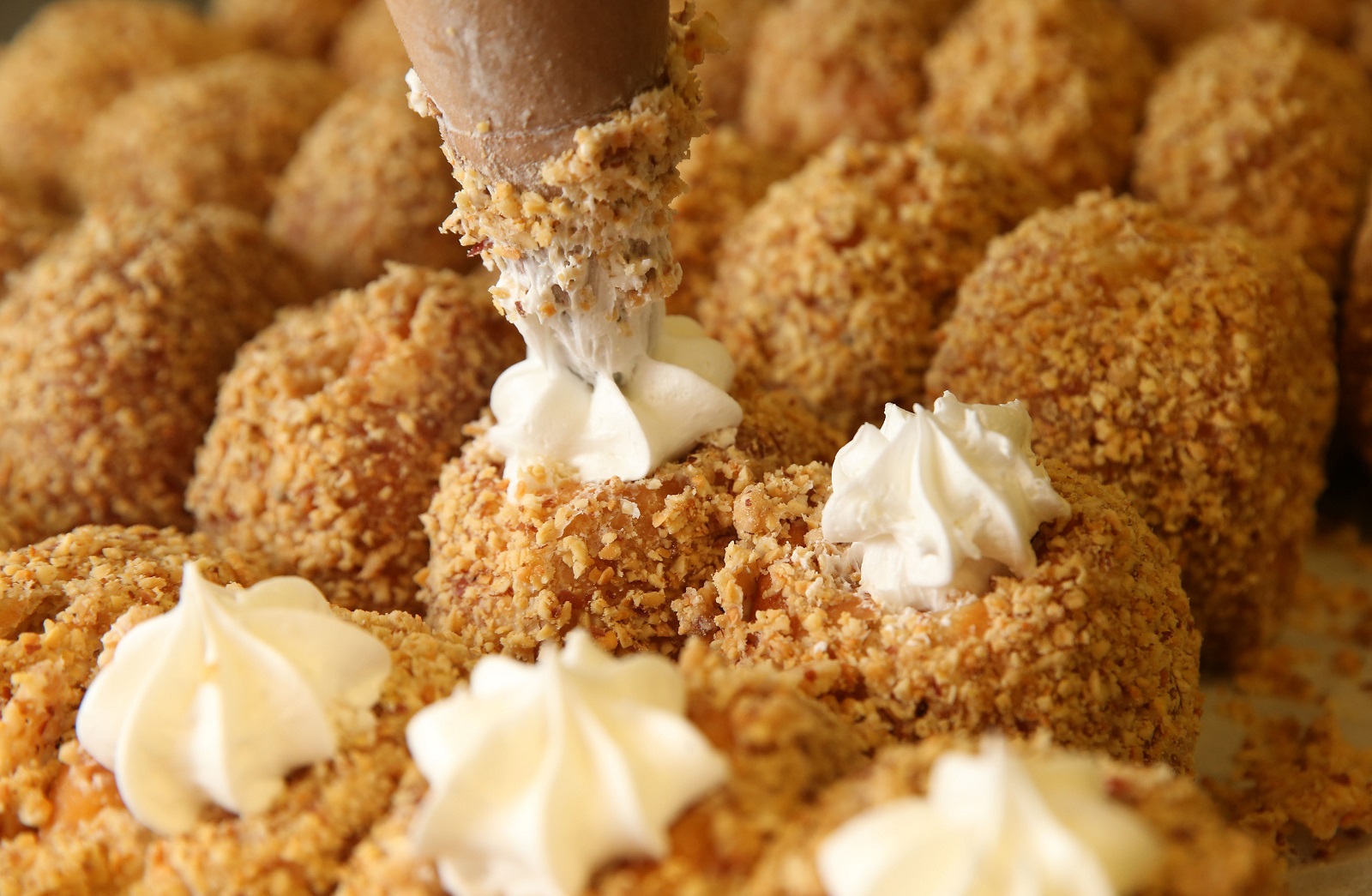 Out in the dining room, it felt cool and tranquil.

“People say ‘Oh, your doughnuts are so big.’ I say, ‘Haven’t you heard of sharing?” said owner Paula Huber.

Clearly, she knows what Western New Yorkers like. And yet the path that led her here was as twisted as a cruller.

“My dad was an executive. He traveled. I lived in three states and went to three high schools,” she said. She trained as a dancer. Returning from a stint in Toronto, she wanted to earn her own money instead of living off scholarships so she began working as a waitress. Subsequently she met her husband, who was in the food business. 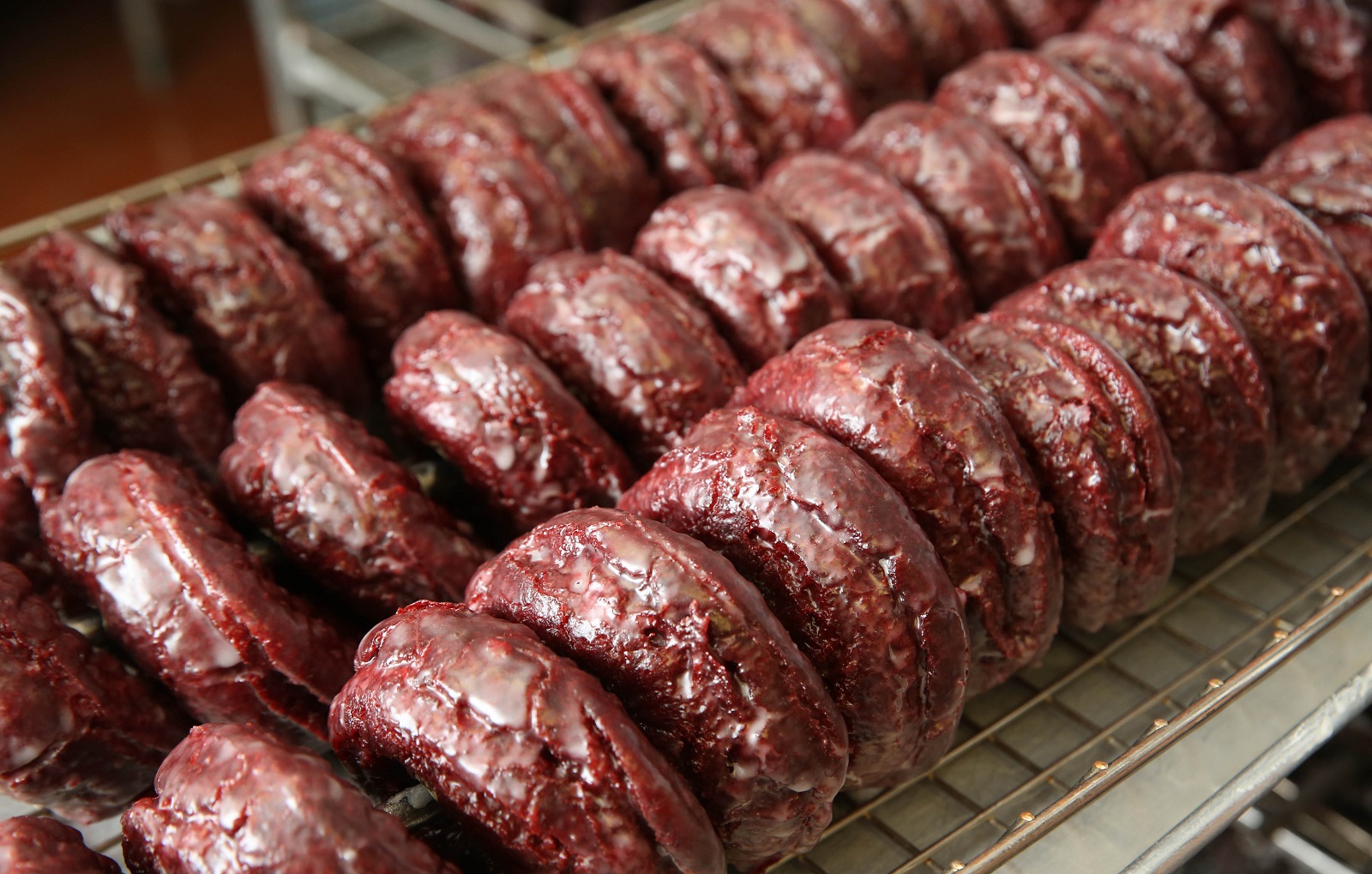 Paula’s started as a shop in a plaza on Kenmore and Englewood avenues. The Paula’s family grew to three locations, while Paula’s actual family also grew; she and her husband have two daughters, both with master’s degrees, and both working alongside her in the doughnut biz.

“Nobody’s killed anybody. I can’t believe it,” she laughed.

Which brings us to another pick-me-upper for when you can’t sleep: With enough sugar and fat, surely there would be no wars. The magic combination has always worked, and always will.