The unsung hero of Rex Ryan’s suddenly resurgent defense so far has to be Lorenzo Alexander, who’s having a career year at age 33 while filling a Shaq Lawson-sized hole at outside linebacker.

Alexander is the oldest player on the team. When the Bills signed him to the veteran minimum in April, he wasn’t even the first player they listed on the press release. He was thought to be a core special teamer who could give the starters a breather on defense.

Instead, Alexander has become the NFL’s leader in sacks, piling up seven in his first five games. He entered the year with nine in his entire career.

Alexander’s also the first Buffalo Bill to sack a quarterback in each of his first five games with the club since sacks became an official stat in 1982. He ranks third on the team in tackles despite playing only two-thirds of the defensive snaps. He’s also forced two fumbles, and he has been near the top of the team’s special teams leaderboard in the locker room all season long.

“Lorenzo is a starter,” Ryan said Monday when asked what will happen when Shaq Lawson comes off the physically unable to perform list in Week Seven. “I guess the big question right now would be, is he going to start in the Pro Bowl? Because that is how he’s playing.”

“People don’t know he’s playing every special teams, he goes out there in all these defensive packages, and he’s getting like a sack a game and a forced fumble a game,” Preston Brown said earlier this year, laughing at the journeyman’s ridiculous numbers. “I told him, he’s going to get 12, 15 sacks this year and then get a big contract at like 38 years old or however old he is.”

Of course Brown had to tease Alexander about his age. Simply put, Alexander shouldn’t be doing the things he’s doing on the field.

It’s not just that Alexander wasn’t a high draft pick or a flashy free-agent signing. It’s that he was undrafted more than a decade ago … as a 300-pound defensive tackle.

Alexander has done whatever was necessary to get on the field in a career that included stops in Carolina, Baltimore, Washington, Arizona and Oakland. That has meant mastering the intricacies of special teams. That’s meant lining up anywhere coaches needed a body – fullback, tight end, guard, whatever. That’s also meant shedding the necessary pounds to change his primary position from defensive tackle to defensive end, then to outside linebacker, and then to inside linebacker.

Alexander said the most he ever weighed was 315 when he was on Carolina’s practice squad after college. Over the next several years, he dropped more than 70 pounds to keep his NFL dream alive – so much weight that when he returned home one offseason, his aunt had to ask his mother who he was.

To shed the necessary pounds, Alexander overhauled his diet and did exercise routines varying from cycling to MMA-style training. He also gave up alcohol, cold turkey.

“Sometimes my wife would get upset because I wouldn’t have a drink with her,” Alexander said. “Or I’d say, ‘I can’t eat that, we have to make a whole different meal for me’ – chicken or broiled fish when the kids are eating junk food or McDonald’s or whatever it may have been. I had to have a whole separate diet for myself.” 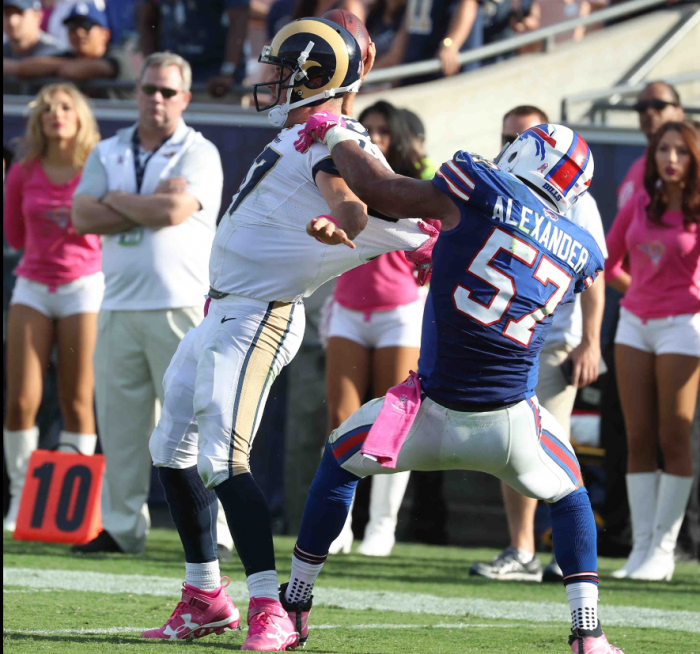 From the outside, Alexander’s hard work seemed to correlate directly to his success, slowly but surely. In 2010, Washington’s Mike Shanahan called Alexander “the best special-teams player that I’ve been around.” He made the Pro Bowl after the 2012 season. That set Alexander up with a nice raise in Arizona. After that, he got to play in his hometown of Oakland, and now he’s lighting it up in Buffalo.

But the truth is not as straightforward. There was much more at play in Alexander’s transformation than cardio and salads. He believes his story isn’t complete without mentioning his faith.

As Alexander went from role to role trying to get on the field, earning the nickname “One Man Gang” from his teammates, he still woke up with an empty feeling each morning. Other players seemed like they had something more working in their lives.

About the time Alexander was having those thoughts, in 2007, Washington’s Pro Bowl safety Sean Taylor was killed during a home invasion, highlighting an especially tough time in Alexander’s life. He credits teammates James Thrash, Antwaan Randel El and Renaldo Wynn with helping him grow in his faith during that time, which he now says is just as responsible for his career turnaround as any workout regimen or coaching technique.

“Growing up, you see guys who say they are Christian, but then you see them out in the club or whatever they’re doing on the side. Those guys really lived it,” Alexander said. “And Christ was the answer for me and has really helped me become a better father, better husband, and ultimately a better player. I don’t have to get angry or mad to play a game. I’m playing to honor my God. I don’t have to have anything happen or force myself to get pumped up for that.”

Alexander carried that motivation with him all the way to Honolulu, where he played in the 2013 Pro Bowl as the NFC’s special teams selection. He carried it with him to Arizona, where a Lisfranc injury prevented him from living up to his contract and made him ponder retirement. And it went with him to Oakland, the hometown to which he didn’t want to return.

Alexander waited as long as possible before signing with the Raiders. He wanted to play for a Super Bowl contender – and he grew up a 49ers fans. But shortly after returning home, Alexander says he saw the reason he was put in Oakland: His cousin – one of his closest boyhood friends who eventually forbade Alexander from running the streets like he did – was about to finish a prison sentence.

“It was such a blessing to be able to be there for my cousin as he was there for me when we were kids,” Alexander wrote on his blog in August. “I immediately understood why God moved me from Arizona back to Oakland. I finally understood that football is only my platform and not my purpose.”

So asked recently if he sees a reason why he was brought to Buffalo, Alexander said he’s still looking. But after Shaq Lawson, Manny Lawson and even IK Enemkpali all cleared way in front of him, he said so far it’s been about his revival as a defender.

“I understand I need to be moldable and fluid as far as what I can do for this team in order for us to win,” Alexander said. “And I’m all for it. Because I want to go to the playoffs – and win a Super Bowl.”