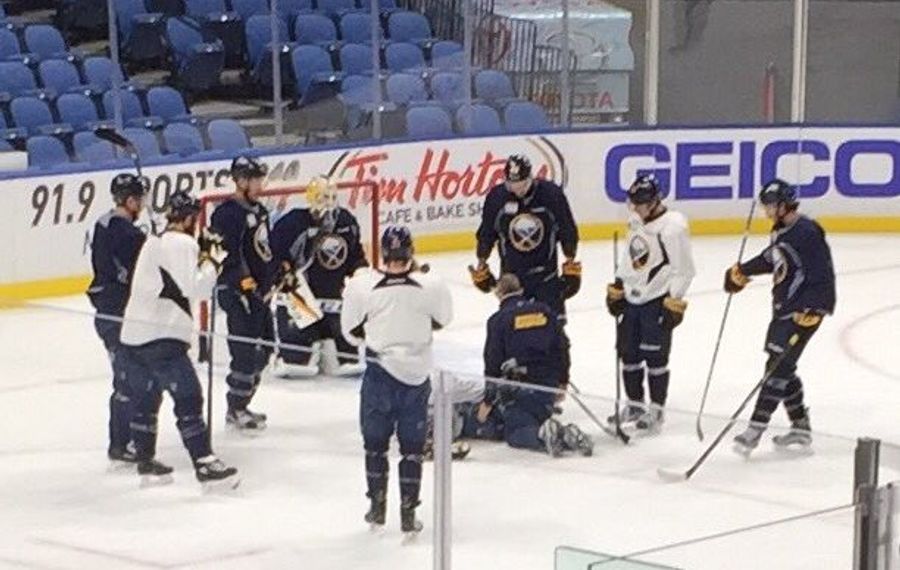 A loud scream by an injured Jack Eichel brought a stunning pause to the Sabres' practice Wednesday.

During a power-play, Eichel suffered an apparent injury to his left leg while skating in front of the net. He got tripped up by teammate Zemgus Girgensons and yelled in pain as he crumpled to the ice. As Buffalo teammates immediately waved for an athletic trainer, Eichel writhed in obvious agony. He gripped his leg with a wince on his face.

VIDEO: Jack Eichel goes down at #Sabres practice, has to be helped off the ice. Looks like left ankle. pic.twitter.com/ntUj3asIGE

"I was just trying to get the puck, and we got tangled," Girgensons said in KeyBank Center. "He just fell awkward. It's always tough to see someone go down, especially a guy like Eichs."

Teammates eventually lifted up Eichel, who was unable to put weight on his left leg. The whole group encircled Eichel and glided with him to the doorway to the Sabres' bench, and he disappeared down the hallway.

This is seconds after Eichel hit the ice. He screamed and then fell. It's obvious how much pain he's in. Extent still unkown #Sabres @WKBW pic.twitter.com/KPOYzQMRAy

Silence filled the arena, which had previously been crackling with shots and passes hitting sticks. Buffalo slowly restarted the workout, which was the final practice before Thursday's season opener.

Eichel is taken off the ice. We heard the yell as he went down. It's the left leg/ankle. #Sabres pic.twitter.com/l70gI7Q9un