FREDONIA – A local gunsmith in the 1820s noticed youngsters burning natural gas that was bubbling up on Canadaway Creek, and he became intrigued. How could he capture that natural gas?
As the locals tell the story, William A. Hart used his wife’s washtub to trap the gas over the creek, drilling a hole in the tub, placing a gun barrel in the hole and lighting the gas.

That’s what led Hart to dig the first gas well in the United States – and start the company that was the precursor to today’s billion-dollar energy corporation, National Fuel.

Once Hart dug the well, he supplied gas to a grist mill and four other buildings, including the tavern across Main Street where the Fredonia Fire Department now stands.

It’s well-known in this Chautauqua County village that the natural gas industry started here – gas lights are on the village seal. But the story behind the man who dug the well and distributed the gas is somewhat obscure outside the community.

Now a group of Hart champions, including former Mayor Stephen Keefe and the couple that owns the original well site, is building a memorial to him a few feet from the bank of the creek where he dug the well. They also are hoping to have the site listed on the National Registry of Historic Places.

“Here we have the beginning of the story,” said Mark Twichell, one of the owners of the site. “He was the first person in recorded history to intentionally drill a hole in the ground to search for a petroleum resource and extract it.” 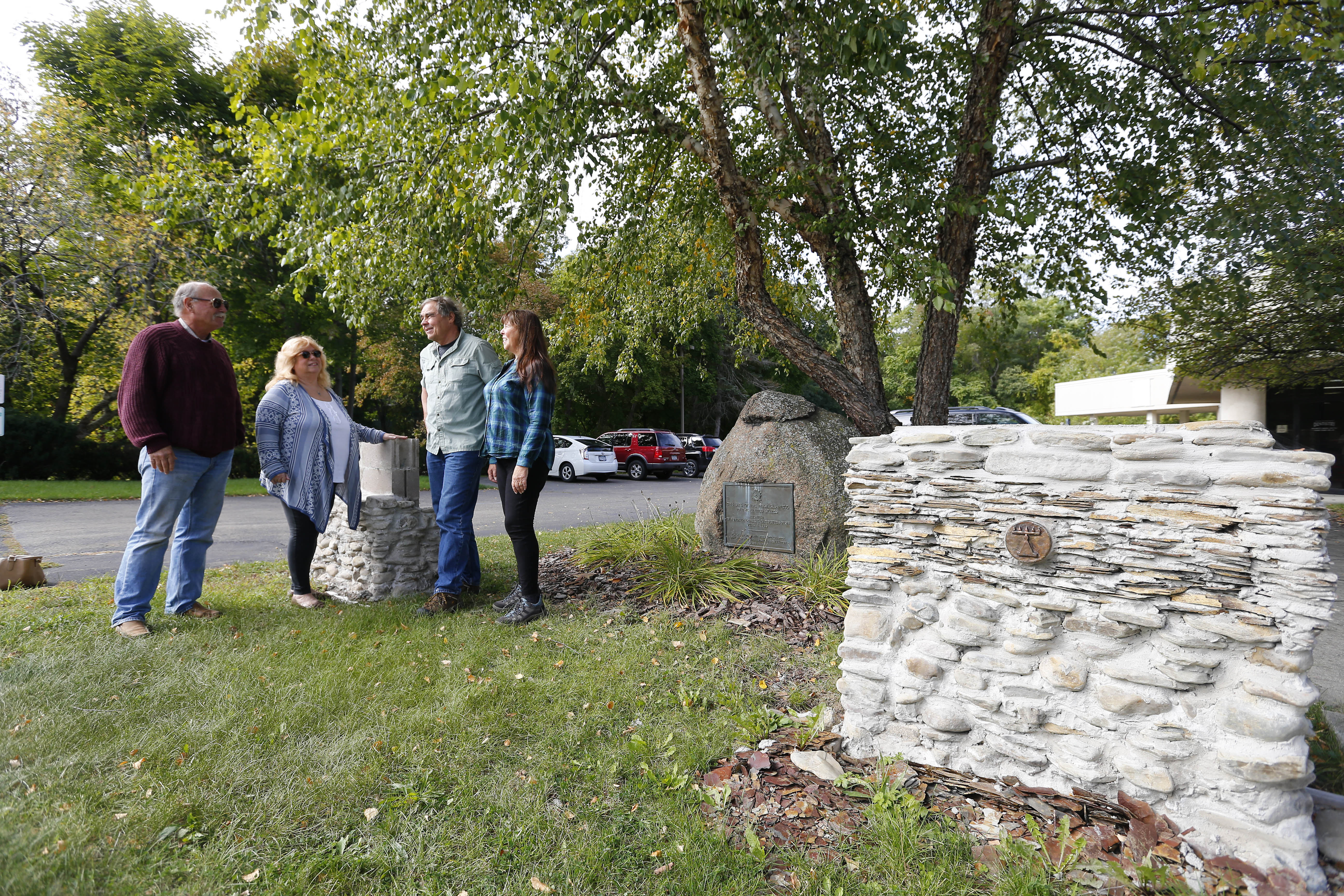 A retired dentist, Twichell is struck by Hart’s ingenuity and perseverance.

“He had no guarantee when he drilled that hole he would find gas,” he said. “He’s observant, he’s using the knowledge available to him at the time. I think he’s an inspiration to anyone, at any time.”

Twichell and his wife, Michelle, a former village trustee, own the property next to the creek where the well was dug. The parcel on West Main Street (Route 20) includes the building where he saw his dental patients for 18 years, and once was owned by Iroquois Gas, a predecessor to National Fuel.

There is a boulder with a plaque near the creek, placed by the Daughters of the American Revolution in 1925, to mark the spot of the first gas well and Gen. Lafayette’s unrelated visit to the village, both occurring in 1825, according to the plaque. And although Hart was a pioneer, and his 27-foot-deep well marked the beginning of the natural gas industry as we know it today, researchers, including the Twichells, have been unable to come up with a likeness of Hart to put on the cast bronze memorial.

The memorial will consist of two four-foot high posts constructed of stones and rocks from the creek. On top of one will be a gas light, the other will have the biographical plaque, and, if they’re lucky, a drawing of Hart.

“The trail seems to lead to blind alleys,” Twichell said of the search for photos.

No one knows what Hart looked like, he said. There may not have been photographs of him, but they believe it’s possible there may have been a portrait or a daguerreotype.

Hart, who patented a percussion lock pistol, operated his gunsmith shop on West Main Street in Fredonia, and the house he lived in on Hart Street still stands, with a working gas well on the property, Twichell said. He moved to Buffalo in 1838 and set up a hardware shop on Pearl Street, serving the nearby Erie Canal harbor.

“The city directory has him listed on Johnson Place,” Twichell said.

His story is worth preserving and retelling, the Hart Committee believes.

“He was able to use available technology and apply that to what he had observed in an unprecedented way,” Twichell said. 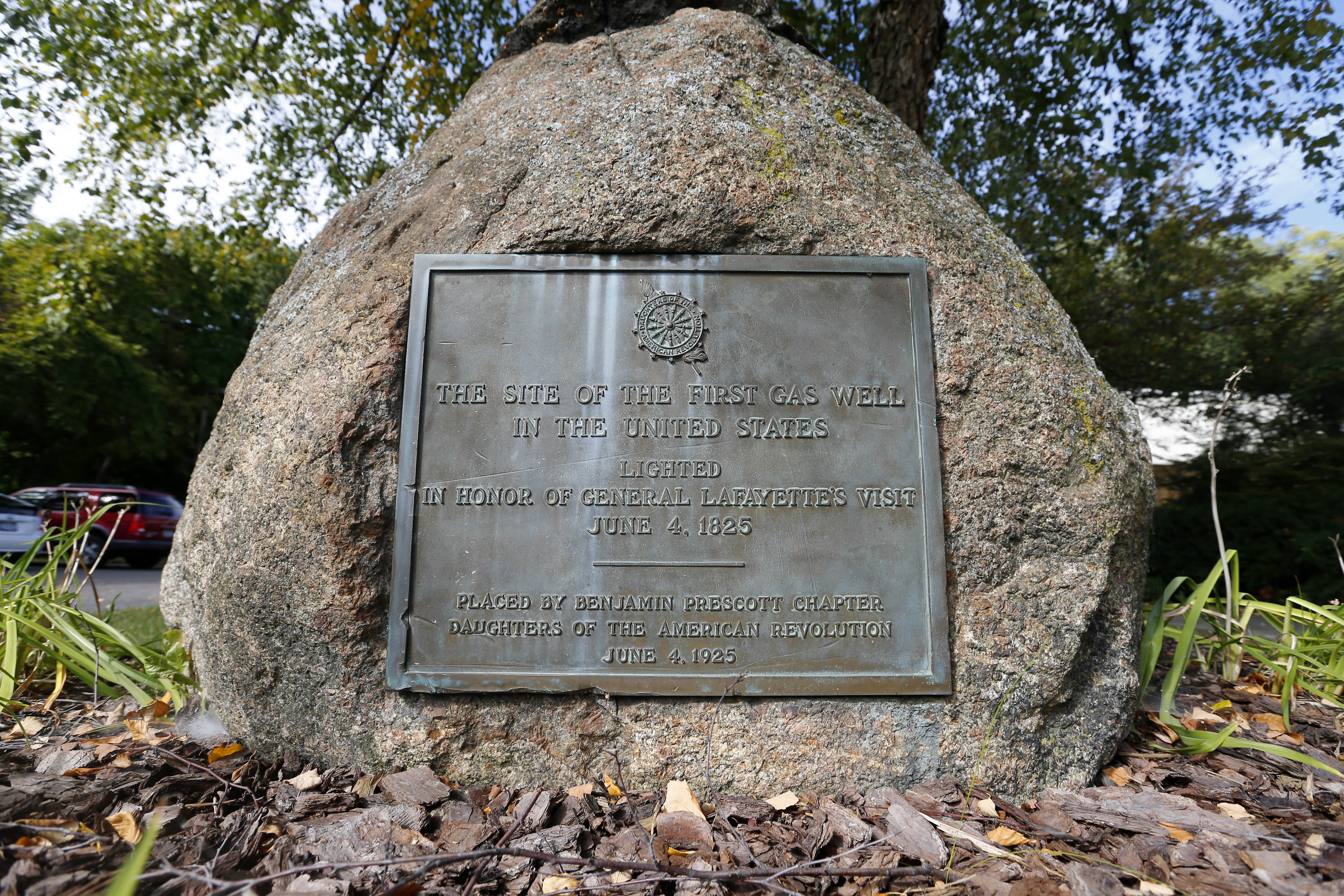 While that section of Fredonia is listed on the National Register as a historic district, that’s not enough for the Hart supporters.

The Twichells applied to the state Department of Parks, Recreation and Historic Preservation for a separate designation for the gas well site, the first step to being named to the national registry. They learned last month the request had been turned down, because of insufficient physical evidence of Hart’s activities there. But they are not giving up, and have contacted state Sen. Cathy Young for help.

One of the mysteries about the gas well is when it was dug. The memorial will proclaim 1825 as the date, based on reports in the Fredonia Censor from Aug. 31, 1825, where the writer points with pride to the natural gas lights in the village.

A biographical sketch by historian and SUNY Fredonia professor emeritus Douglas Shepard describes an account of a student who roomed with the Hart family that Hart first experimented with natural gas in July 1825.

But an account by National Fuel and before that, by Iroquois Gas, lists the date as 1821.

Whenever he drilled it, he used his hands.

Hart was a metal worker and a gunsmith, who was capable of designing and forging his own drilling bit, according to Twichell.

“There were no rotary drills,” he said.

He said Hart likely attached the drill bit to the end of a sapling which had a rope tied to it. The weight of the bit would be driven into the ground by hand and the sapling would help on the rebound.

The well produced gas until 1858, according to accounts.

“To me, it represents the ingenuity of one person being observant to the environment and having acquired some technological skills,” Twichell said.