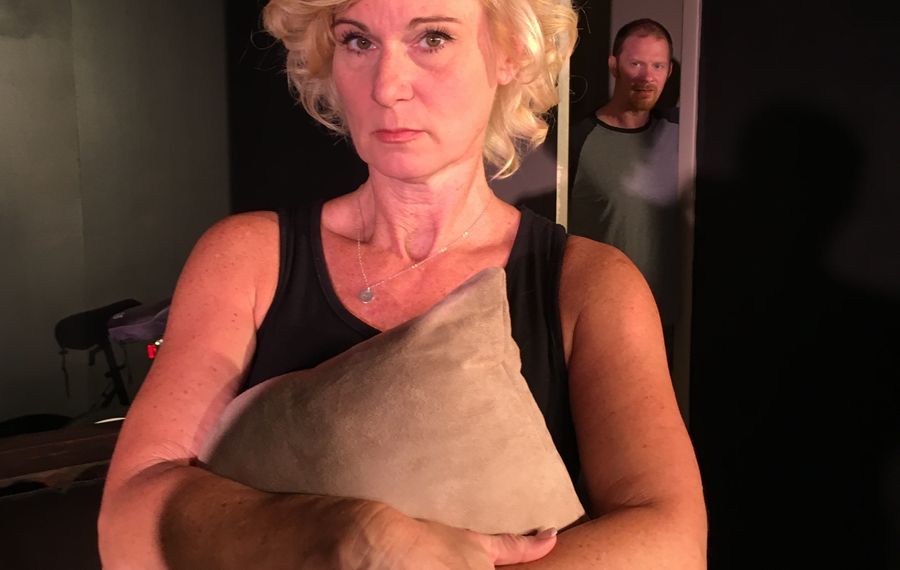 “Human beings go to the theater,” once said poet and playwright Bertolt Brecht, “in order to be swept away, captivated, impressed, uplifted, horrified, moved, kept in suspense, released, diverted and set free.” A more complete list would be hard to  find.

The list is apropos to a taut and tense production of William Mastrosimone’s 1982 drama, “Extremities,” starring Lisa Ludwig, Patrick Moltane, Lisa Hinca and Kelly Cammarata at Desiderio’s Dinner Theatre. I read long ago that Brecht supposedly also said that “theater is not dessert.” That’s true for “Extremities:” it’s the main course.

Director Jay Desiderio said he felt “compelled” to bring this serious tale of attempted rape and the resultant trauma of the intended victim and her roommates to his stage. Located inside Bobby J’s eatery in Cheektowaga, it's a space where plays by Neil Simon and Larry Shue, among others, regularly supply giggles after dinner, no-think fluff, a feel-good night at the theater guaranteed. Not this time. “Extremities” is not everybody’s cup of tea.

In his pre-show welcome, Desiderio admits to his audiences that “You may not like this play, but I promise you that you will remember what you see for a long time.” Just minutes later, a jolting, often savage evening begins. Its flaws aside, the play is potent.

I won’t give the plot away but here are some things you should know. Marjorie, home alone in her nightgown, is surprised by a male stranger. He knows her name and some other personal details and she is soon accosted, overcome on the couch, nearly smothered, threatened with injury or worse, sexual assault underway. Very violent, scarily real, the attacker making vile demands. Watchers squirm, look away revulsed or in gasp.

Then, surprise, the first of many over the night: Marjorie, with some quick thinking, gets the upper hand. The stage goes dark. When the lights come on again, the attacker is bloody, bound and chained inside a fireplace, prodded and poked and threatened with burial, dead or alive, in a backyard garden. Apparently, you don’t mess with Marjorie.

Marjorie’s roommates - ditzy Terry, sensible Patricia - return home and are aghast at the scene they find. Call the police, they say. Marjorie, without any physical wounds from the encounter, ponders the investigation, certainly a trial, the “technicalities,” and says “Judges and juries only believe women in court when they’re dead on arrival.”

You should find out for yourself what happens. It’s not pretty, not always credible and the dissension among the friends about what to do with the caged creep occasionally seems contrived. But, except for petty asides and a finish that clouds the victimization theme, it’s a fast-paced, edge-of-your-seat, white knuckled, vigilante justice story. It's led by the extraordinary Ludwig, as ferocious, crazed Marjorie, and the absolutely terrifying Moltane, as Raul, the trash-talking stalker and rapist. Career roles? I think so. The two are electrifying, she a determined avenger, he obscene and cunning. Sensational.

Desiderio’s direction is sure and detailed and he gets superb results from actresses Kelly Cammarata and the fine Lisa Hinca in roles not completely fleshed out by the playwright. And Desiderio is right. Enjoy “Extremities?” Not a chance. But you will talk about it for days and you’ll be changed somehow. Bertolt Brecht would be very happy.

Desiderio’s dinner half of the theater package is excellent, multiple entrees to choose from: Italian accented haddock, chicken Marsala, a ribeye, for example. Desiderio’s has been in the dinner-theater business for decades, in suburbia, once a Theater District staple, so they know what works. Good food. Varied stage fare. Unbeatable.