The walk from Niagara Falls to Buffalo for four Buffalo Boy Scouts last month started off quiet and cool at dawn.

Nearly 10 hours later, they had confronted the uneasiness of heights and come across an unfriendly property owner, as well as other strangers interested in their trek to bring awareness to diabetes, prostate cancer and veterans.

And they had completed an important step on the way to becoming Eagle Scouts.

The four, Ramon Winfrey, 17, Emmanuel Trueheart, 15, Jeffrey McMillan, 14, and Dekari Jackson, 13, are planning to become a rarity – part of only 6 percent of Scouts who go on to reach the highest achievement, Eagle Scout. By this time next year, the three older boys should reach that goal.

“If you don’t show the boys some positivity, the streets are going to get them,” said Leona Harper, committee chairwoman of Troop 139 out of St. Martin de Porres Catholic Church.

The boys were accompanied on the Sept. 24 walk by Paul McDougald, who made the trek from Niagara Falls to Buffalo for the second time this year in what he calls the “Walk for a Cause” to bring attention to diabetes, prostate cancer and care for veterans. They carried a banner with the names of people affected by the three concerns. 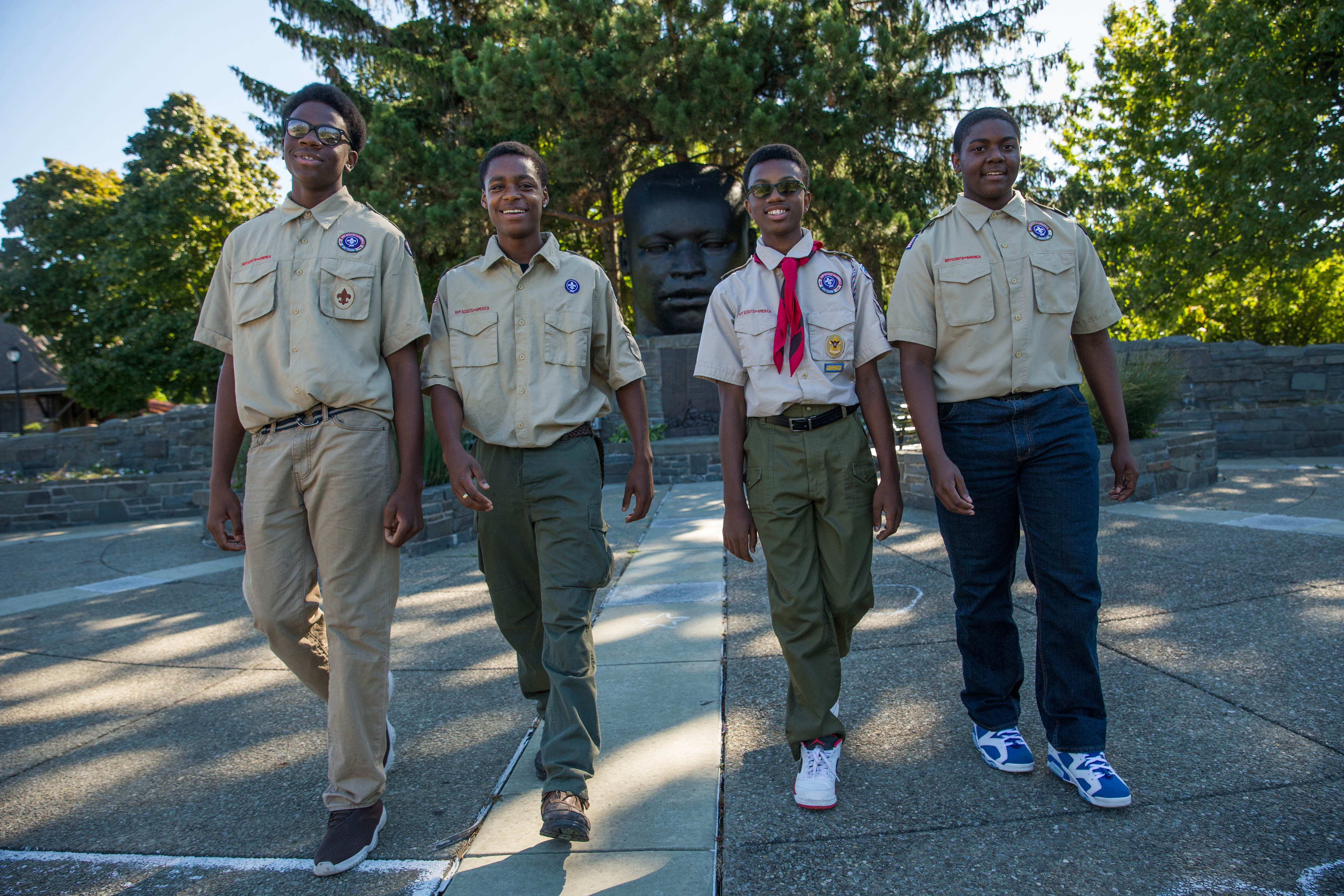 “For the most part, the people we did encounter were very supportive,” he said.

But when they stopped to rest for a moment on a stoop in North Buffalo, there was one man who did not like it.

“There are a lot of ignorant people,” Ramon said. “We stopped to take a break. A man walked up to us and starts cursing us out.”

So they got up and moved on, learning a little something about keeping their anger in check.

But the negative was outweighed by the positive, like the people walking their dogs on Grand Island who offered to give them an escort, McDougald said.

“I think it was excellent for these young guys to be out there,” he said, adding several had a fear of heights. “They conquered their fears, they made it over the Grand Island Bridge.”

The boys had to earn a swimming, hiking or cycling badge as part of their Eagle Scout accreditation. None of the other boys in Troop 139 had chosen hiking, which includes a five-mile hike, three 10-mile hikes, one 15-mile and one 20-mile hike, Scoutmaster Kevin Louimarre said.

“It was about them putting their mind to something and being able to complete it. They decided to do it themselves,” he said.

Harper said one of the boys was more comfortable walking, so they all decided to go with him instead of the swimming requirement, and they surpassed the 20 miles by about three miles.

The boys said when they arrived at the memorial to Martin Luther King Jr. in the park, with their families holding balloons, what they really wanted to do was sit down. But now they are proud of their accomplishment.

“You have to show the world, not just your community, because that Eagle follows you through life. It opens the door, and all these guys are going to be something because of it, and they’re not giving up, no matter how hard it is,” Harper said.