It has been more than four years since the last major changes to The News web and mobile sites, an eternity in the digital age. As we planned the new site, what drove our decisions?

Mobile. Our No. 1 goal was to build a new BuffaloNews.com that works great on phones and tablets. In 2012, the last time BuffaloNews.com was redesigned, 35 percent of Americans had smartphones. A year ago, the number was 68 percent. More than half of The News’ digital usage now comes from mobile devices. So we built the new site around mobile-friendly packages.

More news. Every day, we generate a mountain of news and information about Western New York. The old site limited how much we could display on the home page. The new site lets editors put much more of our coverage on display and makes it easy to find. 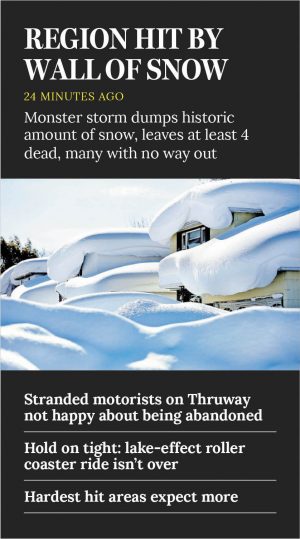 More context. One of the drawbacks of digital news sites: Every story looks the same. In the newspaper, editors signal the importance of stories. A Page One story is a bigger deal than a story on Page B5. Some articles have big headlines, some have small. Major stories may have companion pieces (we call them sidebars) that report a slice of the story. The new site for the first time brings that context to our digital news.

More visual. People love pictures. Research a decade ago by the Poynter Institute in St. Petersburg, Fla., and more recently by the American Press Institute shows photos and graphics don’t just draw attention, they help readers understand and remember what they read.

All-new technology. The technology behind our old site was limiting. So we made the difficult decision to rebuild from scratch using new technology that gives editors the flexibility to react to news and quickly make changes. We also rebuilt from scratch our digital subscription technology, a sometimes-buggy system that vexed readers (and us).

Speed. If a site is slow, nothing else matters. Like auto mechanics tuning a race car, The News technology team has tinkered and wheedled to make pages load four to five times faster than the old site.

What doesn’t change: Behind it all is the biggest news staff in Upstate New York. We love Buffalo and Western New York. From the latest on the Buffalo Billion to the hottest new restaurants to the scoop on the Bills; in print, online and on your phone, we are committed to being indispensable.

Check out the new site. Everyone will have free, unlimited access during our relaunch. And let us know what you think. Leave a comment below or email feedback@buffnews.com.

An earlier version of this column was published online and in the newspaper on Oct. 9, 2016. It has been revised to reflect the launch of the new site.

Mike Connelly– Mike Connelly is editor of The Buffalo News.
There are no comments - be the first to comment