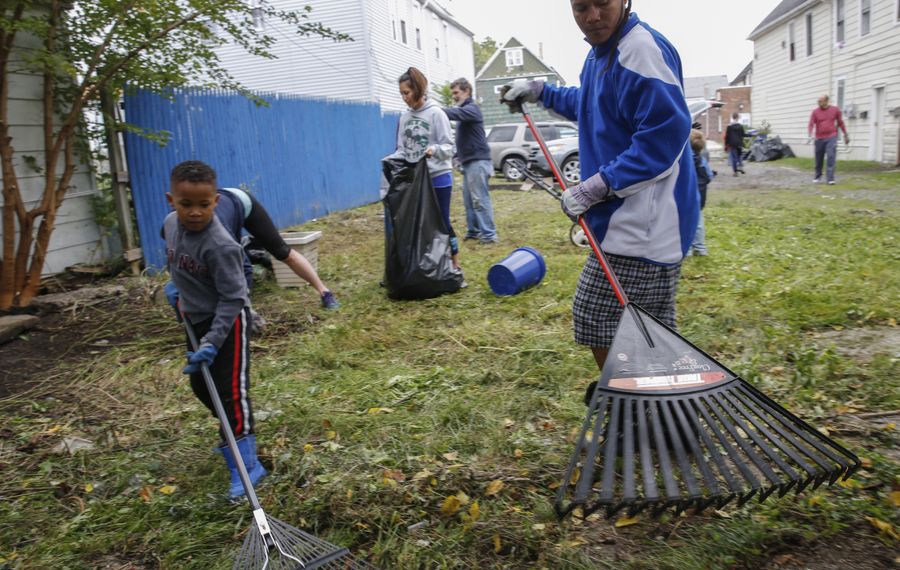 Toddler Santiago Forero wielded a push broom twice as tall as he was Sunday morning as he joined a work group to clean up glass, garbage and debris from the overgrown yard next to his family’s home in Lovejoy.

Santiago, who has not yet had his second birthday, was joining a group that included Boy Scouts, members and the rabbi from Congregation Shir Shalom in Amherst, and members of the board and the refugee resettlement team of Jewish Family Service. The goal was to make the lot next to the houses that are occupied by families from Burma, Colombia, the Congo and Syria safer for the youngsters in those newly arrived families.

“We’re trying to do more hands-on projects, as an agency,” said Jewish Family Service Board Chair Blaine Schwartz. “We are trying to reach out more to the community, because there are many small projects that need to be done to make life more comfortable for the refugees.”

In that spirit, the group, ranging from small children to seniors, mowed grass, trimmed weeds, picked up broken glass and other hazards, cut back branches and removed everything from two old TV sets to random planks of wood. With many hands – including those of husband and wife Diego Alexander Forero and Judith Paolo Gongora and their sons, Joel Sebastian Forero, 6, and Santiago, 1 – the work was light and the group was wrapping up when rain began to fall just after 11 a.m.

Speaking through a translator, Gongora said she was grateful for the help in making the lot safe for her two boys.

“It will be better now,” she said, watching her sons follow their father as he hauled cut tree limbs and bags of trash to the front of the lot for collection.

The houses adjoining the lot are “like a small United Nations,” said Schwartz. “A lot of refugees from the Congo, Burma and other countries are coming in destitute and trying to start their lives over.”

For three of the refugee families, including the Foreros, who came from Colombia, the move into the Bailey Avenue home marked the second time they have started over here. They were settled and living at 103 Thompson St. in Black Rock in late July when a fire that started in the vacant house next door spread to their four-unit apartment building and they were displaced again.

“As part of its duty as a resettlement agency, JFS provided them with furniture, food and everything necessary to feel at home in their new environment,” said Rabbi Alex Lazarus-Klein of Congregation Shir Shalom. “Then in a blink of the eye, it was gone.” After a brief stay in a motel, the families were resettled into the large houses on Bailey, where they are preparing for their first winter in Buffalo.

“Part of what we do as Jews is repair the world,” said Jewish Family Service President and CEO Marlene Schillinger. “If you save one life, you save the world.”

Jewish Family Service began its resettlement program here in the 1980s, with help from the international Hebrew Immigrant Aid Society, when it helped Russian Jews immigrate to Buffalo. Now the agency resettles refugees from around the world, including Christians, Muslims, Baha’i and people who practice other faiths, said Schillinger. “We do soup to nuts,” she said. “We pick them up at the airport, find them safe housing and other necessities.”

It’s a little-known fact that refugees agree to pay back the cost of their flights here, said Schillinger. “That’s a misunderstanding from the general community. People think they come here and get everything for free, and they don’t.”

On Sunday, Schillinger beamed as she watched the youngsters from the refugee families work next to children and young adults who were there to help, including several from Boy Scout troops affiliated with the Jewish Committee on Scouting, a component of the Boy Scouts of America Greater Niagara Frontier Council.

“We wanted to get kids involved on both sides,” she said, watching as little Santiago trailed after Matthew Romeo, 5.

“These are people who have really witnessed the worst in humanity,” said Schillinger, whose agency launched the collaborative Western New York Center for Survivors of Torture, which coordinates mental health counseling, medical care and legal services to refugees. “It’s an honor for me and my agency to help them. The Hebrew word is mitzvah, a good deed.”

For Leah Romeo and her three children, Michael, 11; Ava, 9; and Matthew, that mitzvah extended beyond raking and collecting trash. As the work wound down, Leah and Ava produced plates of homemade doughnuts and corn muffins. Enjoying the baked goods together was a pleasure that needed no common language.

Another newly arrived family whose members spoke almost no English watched the cleanup wide-eyed from the windows of their apartment, then came down to indicate their appreciation with smiles. “Thank you so much,” said the mother, pulling her little girl close. Nodding at the now trimmed and clean yard, she said, “It’s a blessing.”