187 years ago today, Sam Patch became Niagara Falls’ first daredevil. Surviving an 85-foot jump at the falls on Oct. 7, 1829, Patch was the first reported person to jump and survive — and he did it twice.

Patch was a 22-year-old daredevil from Rhode Island who became famous from other waterfall jumps across the United States. Always striving for a bigger and better feat, Niagara Falls was billed as his most impressive leap yet.

Unlike later daredevils who entered the Upper Rapids and rode over the cataracts in barrels, Patch made his two leaps from a wooden platform erected at the edge of Goat Island. Rochester-based historian Ruth Rosenberg-Naparsteck writes in Rochester History magazine that at the last minute, the platform had structural problems:

"Within an hour of the scheduled jump, a chain securing the ladder to the cliff walls snapped, breaking 15 feet from it. The steady morning rain had already diminished expected crowds and was slowing work on the ladder. Patch was visibly distressed. He was anxious to jump this greatest of all challenges, to build his reputation that he felt was now at stake." 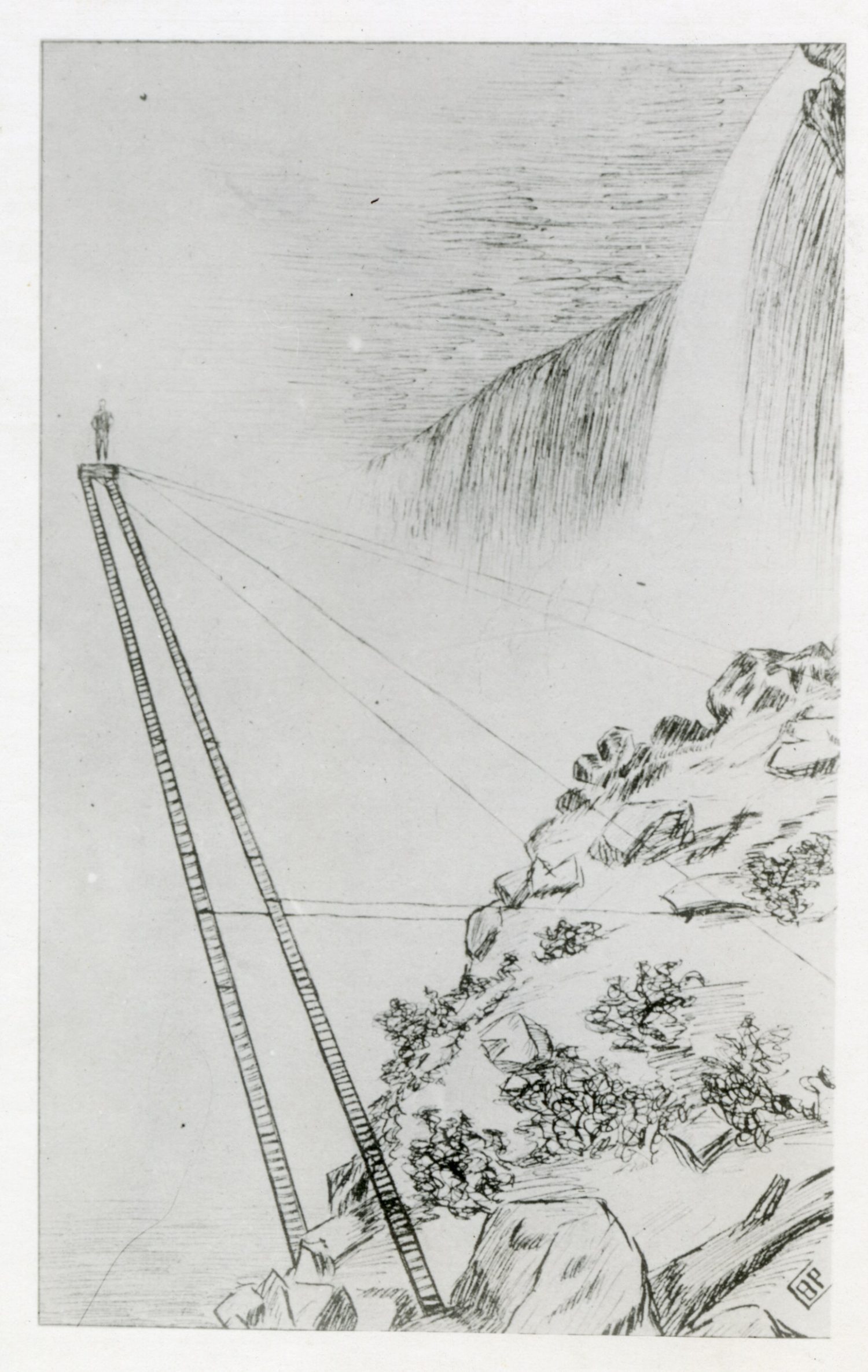 This image shows the platform that Sam Patch jumped from. It was a combination of two ladders, ropes and chains that were fastened to the rock on Goat Island. (Image courtesy of Niagara Falls Public Library's Local History Department)

Hours later, the platform was repaired and Patch was ready to leap.

William Lyon MacKenzie described the exploit in the Colonial Advocate newspaper, published a week after the event:

“A ladder was projected 40 feet down on which Sam walked out; clad in white and with great deliberation put his hands to his sides and jumped from the platform. While the boats below were on the lookout for him, he had, in one minute, reached the shore unnoticed and unhurt and was heard singing merrily on the beach.”

When he emerged from the swirling waters, cheers. He then walked through the small crowd to collect money.

After his first jump, he inserted an ad into a Buffalo newspaper five days later apologizing for “a puny jump of 85 feet” and promising to jump again from a higher height of 130 feet. He jumped again on Oct. 17, this time from 130 feet, and this time before a crowd of 10,000 people. Rosenberg-Naparsteck reports Patch stood on the platform for 10 minutes this time, "basking in the cheers of the crowd." Once again, he jumped and survived.

The Buffalo Evening News wrote about Sam Patch nearly 100 years later, on Nov. 13, 1926. Frederick A. Godcharles wrote: "In this successful leap the name of Sam Patch rang through the land with plaudits."

Patch’s last jump came a month later on Friday, Nov. 13 in Charlotte, N.Y., outside of Rochester. It was billed as "Sam's Last Jump," then Patch planned to retire at the age of 22. However, he jumped from 125 feet in front of a crowd of 12,000 people into the Genesee Falls and did not survive. He’s buried in Charlotte Cemetery.

His legend has lived on long after his fatal jump. President Andrew Jackson named a horse after him. There is a boat tour company in Charlotte named Sam Patch that does Erie Canal tours. And recently, Patch’s story was featured on “Drunk History," the Comedy Central show.

According to Godcharles' article in The Buffalo Evening News, "It was Sam's ambition to jump from the London bridge and he had signed an agreement with the captain of a fast-sailing packet to London to make the voyage the following spring, and jump from the yard-arm every fair day."

Read the full article from the Nov. 13, 1926, edition of the Buffalo Evening News: