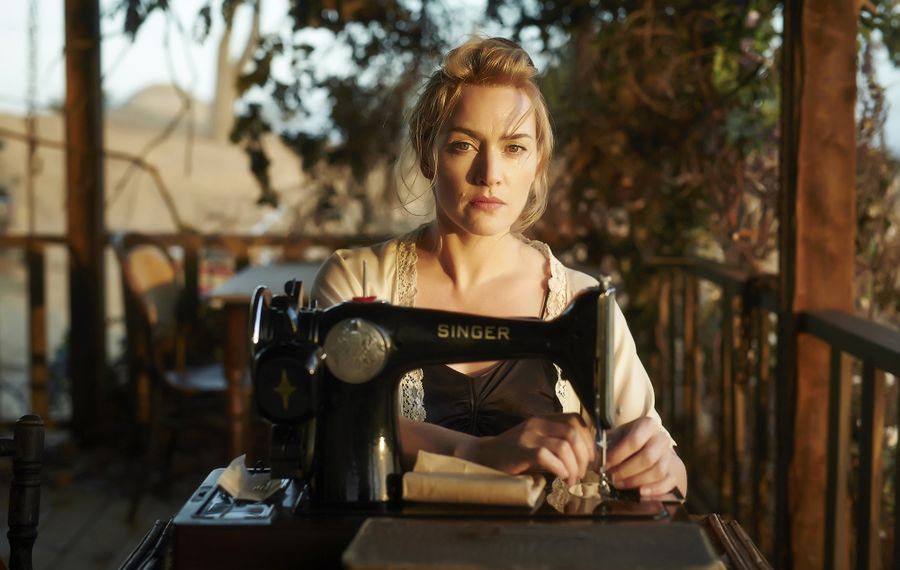 When “The Dressmaker” begins, glamorously dressed Myrtle “Tilly” Dunnage sets her suitcase and Singer sewing machine down, and looks up at the rickety house on a hill where she grew up, just beyond the tiny movie set of a town. “Did anyone know you were coming?,” she’s asked. “They’ll know soon enough,” she answers.

Oh yes they will. Tillie is about to throw the whole town into a tizzy.

Set in Australia in 1951, Kate Winslet stars as a Paris-trained seamstress who comes back after 25 years to come to terms with her past – and exact some revenge on townspeople who falsely accused her of killing a 10-year-old boy before being sent away. Except, she’s not sure she didn’t actually do it.

This is a revenge comedy – except when it turns serious, which it does a lot. Winslet wraps herself around the lead role – and more than a few tight-fitting, low cut dresses – in this entertaining film full of surprising twists.

Dressed like the cover girl for haute couture, Tilly moves in with her batty mother, “Mad” Molly (Judy Davis). Before long, she’s making custom dresses for the townsfolk who otherwise want nothing to do with either of them.

Tilly tries unraveling her past, questioning townspeople about what really happened on that fateful day when little Stewart Pettyman died.

As Tilly begins making dresses for the women in town, Evan Pettyman, Stewart’s father, brings another dress designer to town to try to shut her down. She proves no match, but then neither does the town.

Some things don’t fit. That starts with why Tilly is there, and why she doesn’t hightail it out once she is. Liam Hemsworth is cast as Teddy, Tilly’s love interest, and looks in every frame as if he just stepped out of the pages of GQ, straining credulity. One’s also hard pressed to accept Winslet’s Tilly being the same age as him, Gertrude and other former classmates.

That aside, “The Dressmaker” is a fun and at times touching romp through the Outback, as well as a feast for the eyes and ears. And thanks to the somewhat madcap direction and script Moorehouse co-wrote, Winslet is all dressed up with somewhere to go.

The lowdown: A successful seamstress returns to her Australian childhood home to reconnect with her mother and work through questions about her past.