Only weeks before he was to be elected to his second term as president, Franklin Delano Roosevelt visited Buffalo to dedicate the city’s new federal building on Niagara Square. 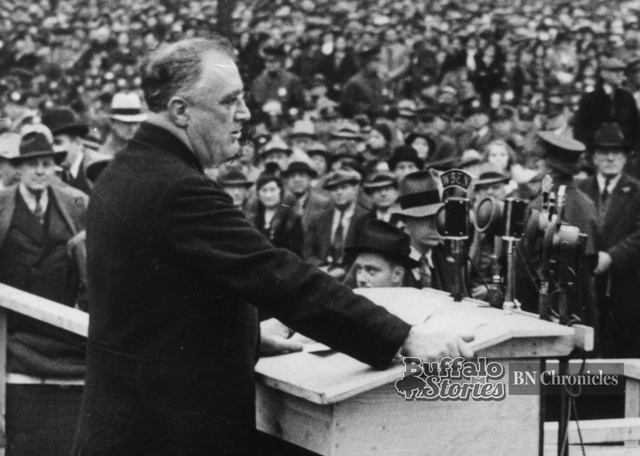 The Oct. 17, 1936, Buffalo visit was Roosevelt’s first as president -- although he had visited Buffalo countless times during his four years as New York’s governor. The courthouse was a federally funded New Deal project and was designed primarily by Buffalo architect E.B. Green.

The Depression was on the mind of the president and the thousands who turned out around Western New York to greet him and his train as he spoke in Buffalo and in Niagara Falls. 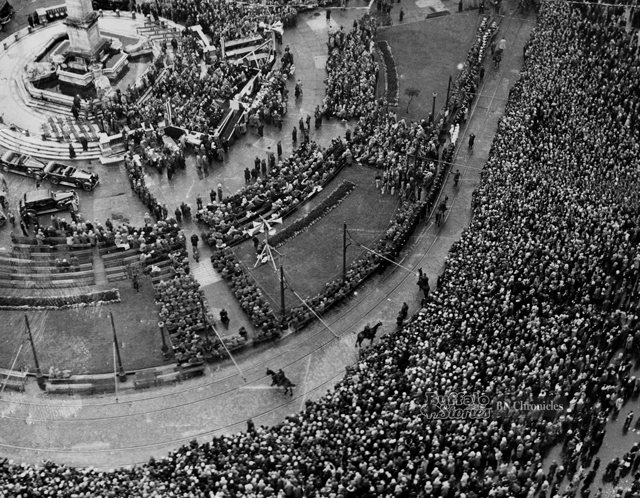 “I need not compare the Buffalo of today with the Buffalo as I saw it the last time I was here,” Roosevelt said in Niagara Square. “You will recall, I am sure, those years when I had the privilege of being the chief executive of this state. Already in 1930 the problems of unemployment and depression had become severe and you will recall also that it was in 1931 that I, as governor, called the Legislature of the State of New York into special session to provide relief for the distressed unemployed of the state and New York was the first state in the Union to definitely accept the responsibilities of seeing to it that as far as the state's resources could prevent it, none of its citizens who wished to work would starve.”

The president’s dedication was carried on radio stations WKBW, WBEN and WBNY. 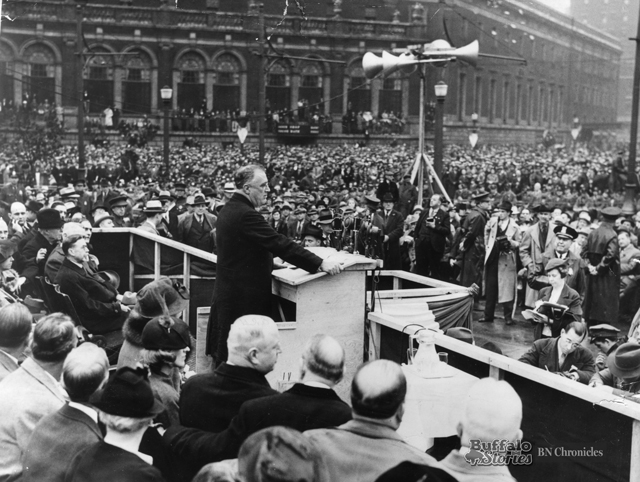 This print was backwards in The News archives, and has appeared backwards in print at least twice through the years. Here it appears with the proper orientation—with the Statler Hotel to his left, and the new courthouse out of frame to the right.

This brief clip was not from Roosevelt’s Buffalo speech, but it was typical of his talks throughout the 1936 campaign.

Roosevelt arrived in Buffalo at 10:30 p.m. the night before his speech, and left at 11:33 a.m. after the downtown Buffalo dedication and a speech at Hyde Park Stadium in Niagara Falls. The president slept in his special railcar, “The Pioneer,” as it sat on the tracks of the New York Central terminal, surrounded by 25 New York Central Railroad Police.

The day after the president’s visit, an interesting side note about the campaign was the subject of an editorial in the Courier-Express, discussing the media presence of President Roosevelt and his opponent, Kansas Governor Alf Landon.

It is not late for the Democratic organization to show its fine sense of sportsmanship in campaign tactics. Hitherto it has pitted the perfect radio voice of Mr. Roosevelt against the more limited oratorical personality of Mr. Landon, proving Mr. Roosevelt a far superior air attraction than the less unctuous Kansas governor. If the election were to be decided on mere rhetorical counts, the Chanticleer of Democracy undoubtedly would have the edge.

Mr. Landon, however, is really a rather nice looking man with a smile of his own, not overwhelmingly ingratiating, of course, like Mr. Roosevelt's but still fairly easy on the eyes. The impression is that Mr. Landon, who does not broadcast as well as Mr. Roosevelt, might perhaps screen as well.

These considerations have reference to the campaign movie recently made at Hyde Park House, featuring the Lord High Chief Executive in a story designed to show a typical day at his home. The cameras ground, the sound trucks maneuvered, Franklin the Fair flashed smiles as he sat at his desk — in a word, politics went Hollywood. No release date was set for the attraction at the movies but it certainly should be billed soon now.

What box-office following both candidates may have, if both are offered on their visual merits to the movie fans, could only be conjectured; but at least Mr. Roosevelt's undisputed radio advantage over Mr. Landon might thus be cut down in the interest of good emotional sportsmanship.