Under the watchful eyes of their mentors-turned-judges, four up-and-coming bartenders sliced garnishes, stirred glasses, shook tins and bodies and served a slate of classic and original cocktails at the City of Good Mentors 2016 cocktail competition last week.

The Campari-sponsored event was hosted by the Buffalo chapter of the United States Bartenders’ Guild at Panorama on Seven. Five judges and four competitors gathered at the bar at the Buffalo Marriott Hotel HARBORCENTER to showcase the talent of some of Buffalo’s newer barkeeps.

The USBG is a professional organization providing educational classes and events, a place to share and gain knowledge and camaraderie for bartenders and industry members, as well as the broader community. “Being a USBG member gives you access to exclusive member-only events, competitions, trips and online resources,” explained Kowalski, an account manager for Espirit du Vin who noted that all industry professionals – not just bartenders – are invited to join. “Members also have the opportunity to progress their knowledge and craft through the USBG Master Accreditation program.”

With its focus on mentorship, the competition showcased not only the skills of those behind the pine, but the relationships between mentor and student that have formed alongside Buffalo’s own relatively young bar scene. It’s one of the tenets of the USBG for that reason – and especially important in the fast-paced, often competitive field of bartending. 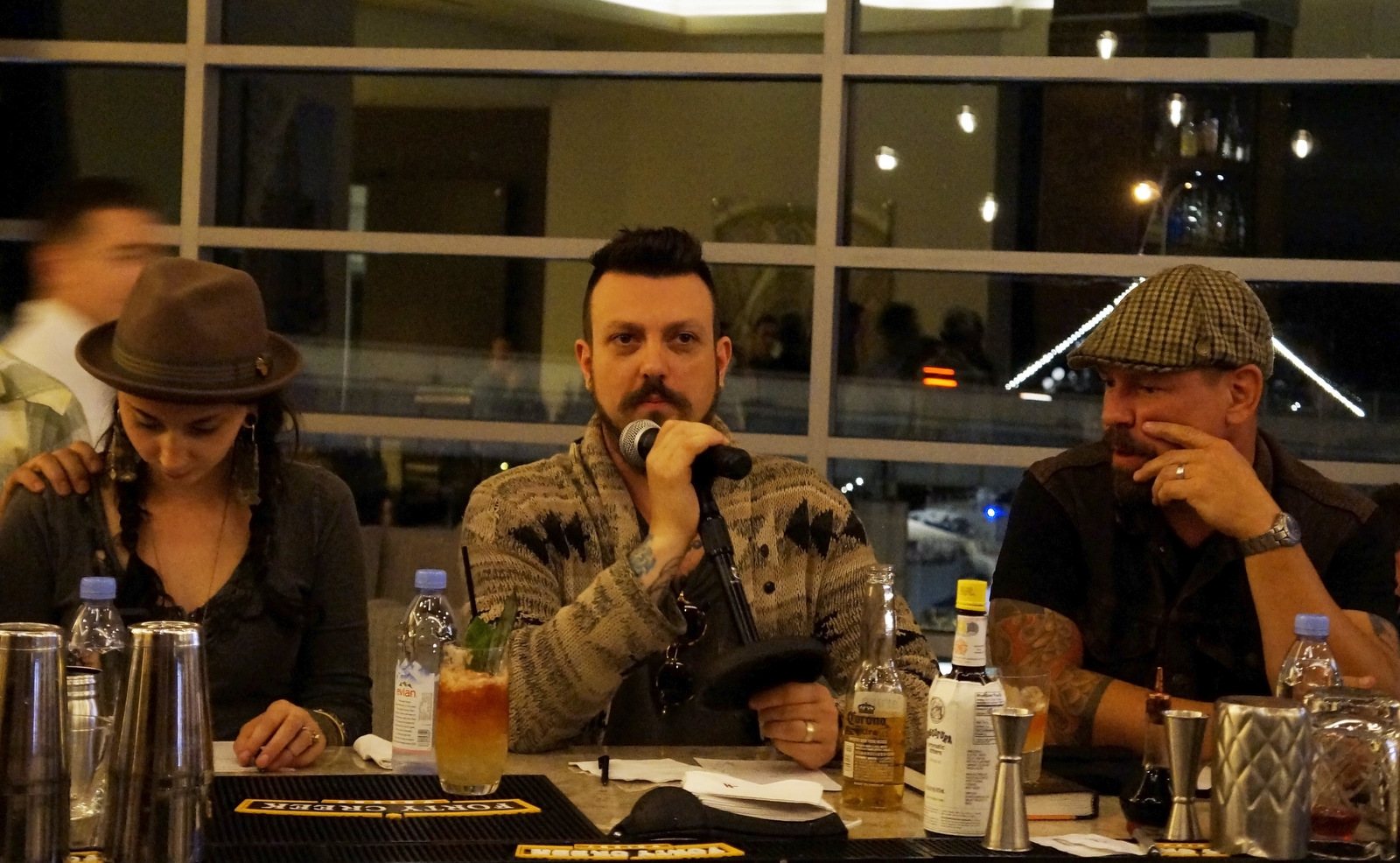 Feedback from industry veterans is helping young bartenders hone their edge. Judging were, from left, Kerry Quaile and Jon Karel of Buffalo Proper, and Tim Stevens of Ballyhoo. Not shown: Dan Hagen of Billy Club, and USBG chapter president Lauren Kowalski. (Lizz Schumer/Special to The News)

“In my opinion, mentorship is important because it not only fosters a team mentality within a bar crew but also emboldens an education-based learning process to being behind the bar,” reflected Quaile, who credits her husband and Buffalo Proper colleague Karel as her own former mentor. “It has definitely helped our scene to grow exponentially over the last five years.”

Stevens, one of the longest-established bartenders on the judging panel with a 24-year career, founded the San Diego chapter of the USBG before returning to Buffalo. He considers mentorship essential to creating and maintaining an establishment’s spirit. “Mentorship is the only real way to take the baggage of past work away and introduce the desired style,” he explained. “I have learned as much from poor mentorship as I have from the real inspirations in my own career, so it has a duality as well. You take the good and the bad and you develop your own unique style.”

That knowledge showed itself in Nuñez, first up in the competition, whose layered cocktail drew high marks from the judges. Each bartender was tasked with one classic and one creative cocktail, and answered questions about style, history and ingredients while they mixed up their drinks. The field was tight, with Whyte winning. 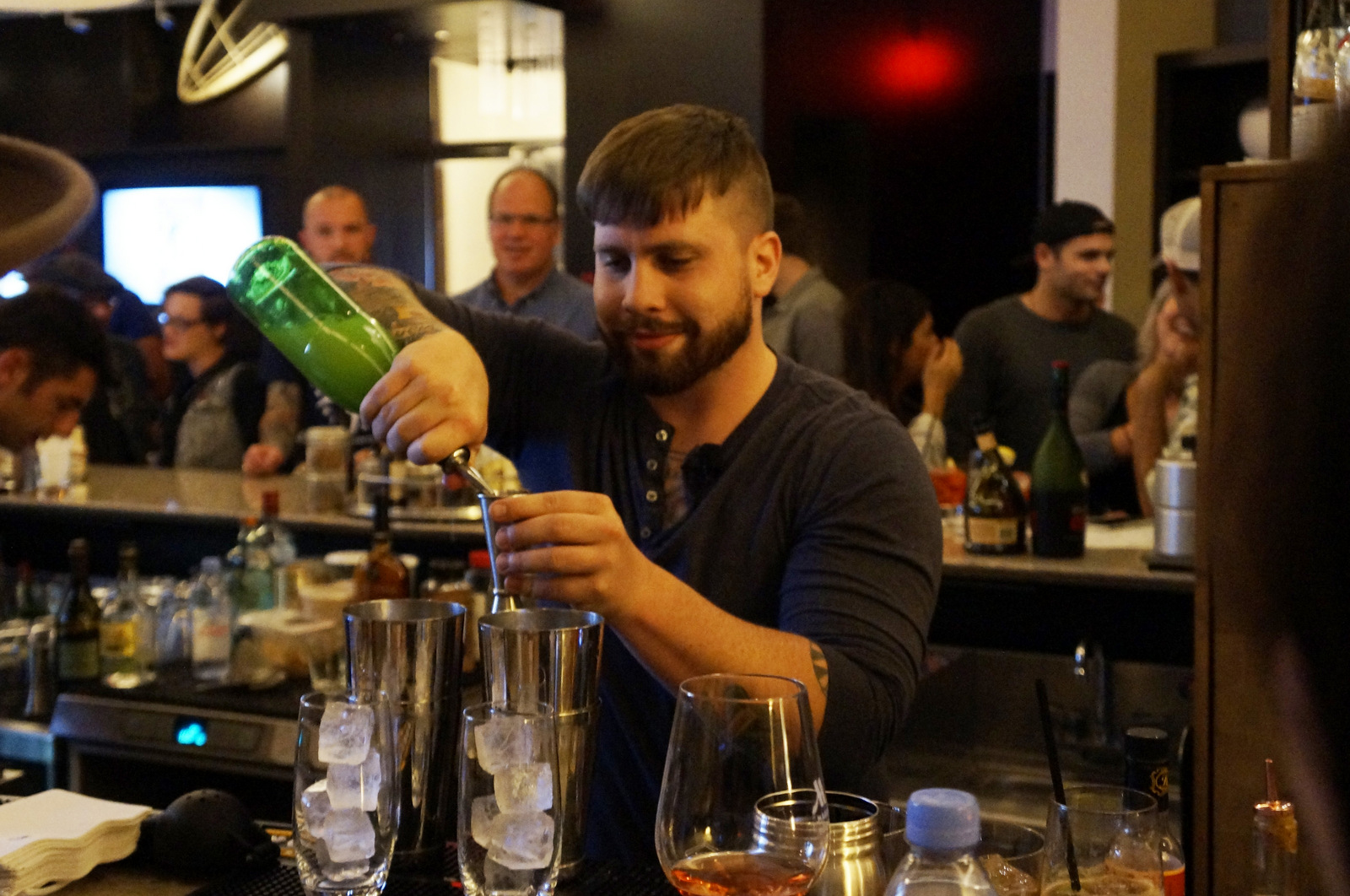 The formation of the USBG and events such as this one are emblematic of a burgeoning scene, with a spate of bars now distinguishing themselves from one another by the talent behind them, and the individual styles these mentor teams foster. The Western New York cocktail scene has exploded in recent years, since Vera Pizzeria sparked it only five years ago. In a city the size of Buffalo, mentorship is especially important, since so many of the bartenders learned with and from each other, Hagen explained.

“We all bounce ideas and criticism back and forth. I was proud to be judging the event with one or two people that have helped me – whether they know it or not – build my knowledge base for cocktails, and most importantly, guide me when I have questions about business.”

By the end of the evening, mostly industry folk, competitors and family remained as Dispenza, Whyte, Nuñez and Pitman waited arm-in-arm to hear the results. As Whyte’s name was called, the room erupted in applause from the panel of judges, competitors and supporters alike. In these corners of Buffalo’s bar scene, a win for one can be a win for all.