There have been countless attempts by daredevils to make it over Niagara Falls throughout the years. Not many are as brazen — or as deadly — as the 1995 attempt by Robert Overacker to go over Niagara Falls on a jet ski. The stunt school graduate planned to escape the jet ski with a parachute, but witnesses say his parachute never opened and Overacker became another daredevil casualty.

Here is the original Buffalo News article from Oct. 1, 1995:

NIAGARA FALLS, Ont. — Robert Overacker carried his plea for the homeless to the brink of the Horseshoe Falls on Sunday, his only security a jet ski and a parachute.

His jet ski kept on going. He plunged 180 feet to his death. Witnesses say his parachute failed.

Overacker, 39, of Ventura County, Calif., challenged the falls at 12:35 p.m. on a jet ski bearing a sign drawing attention to the homeless.

Pulled from the turbulent waters of the lower Niagara River by workers from the Maid of the Mist, Overacker was pronounced dead on arrival at Greater Niagara General Hospital.

Constable Richard Daniels of the Niagara Parks Police said he spotted the jet ski after it was launched, about 300 feet upstream, and ran along the edge of the river, pleading with the daredevil to turn back.

"I don't think so," Overacker called back to him.

The officer asked why he was doing this.

"To raise awareness of the plight of the homeless," the man replied.

Overacker raised his arms at the brink of the falls and disappeared.

Overacker's brother, Michael Zureich of San Antonio, Texas, and a friend, Christopher Yeoman of Ventura, Calif., were in shock over his death, according to police, who questioned them for three hours.

A graduate of a California stunt school, Overacker had planned this stunt for seven years but was dissuaded twice by friends.

"The (jet ski) went straight out — and he went straight down," said Judy Calabretta of Wooster, Ohio, who was vacationing with her family. 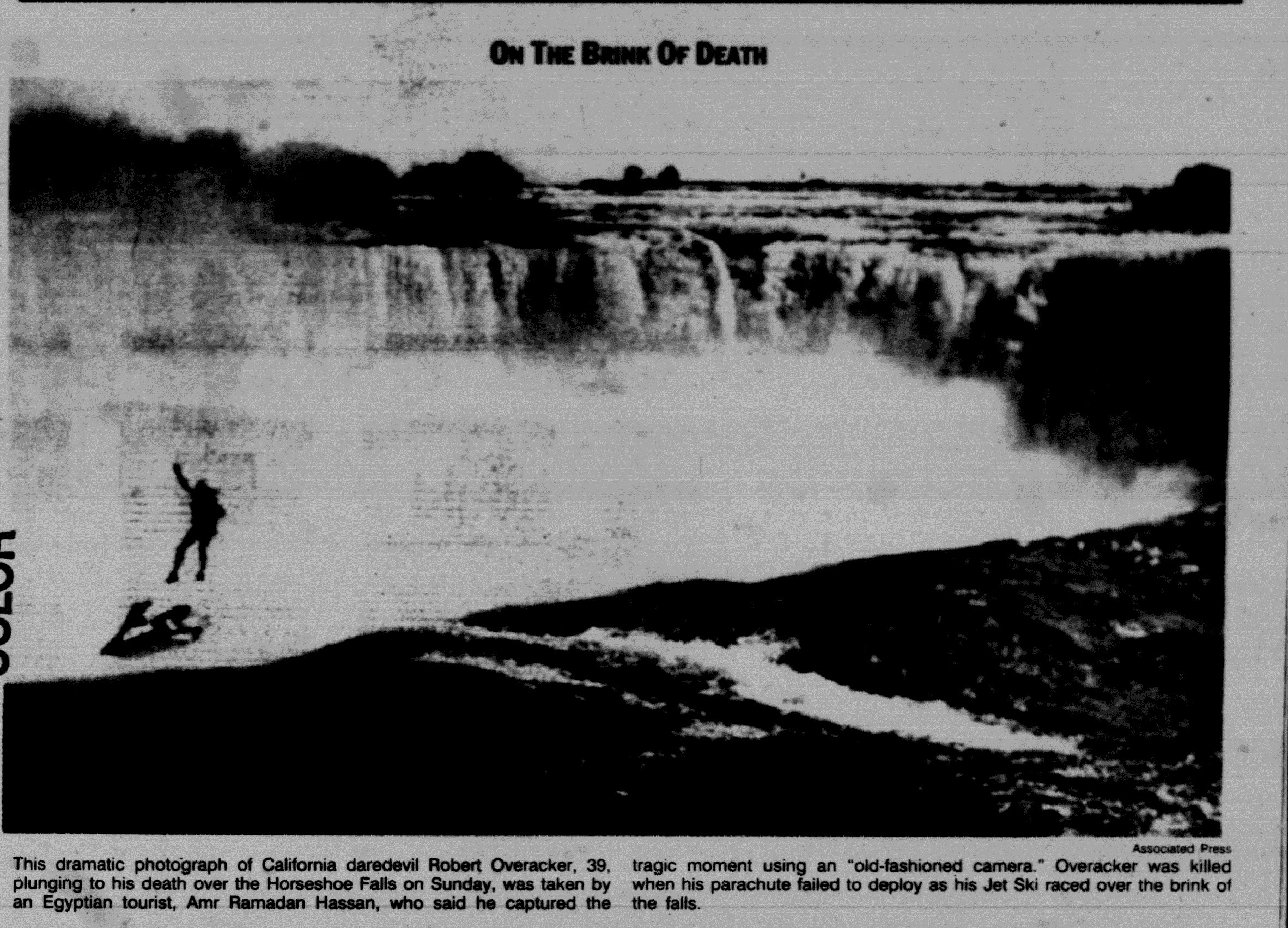 Her son, Dominic, 11, was the first witness to recall his message of help for the homeless.

"I saw the jet ski coming (within sight from) behind the bushes, and it had a sign on it that said, I believe it was, 'Feed the Homeless,' " Dominic said.

Throngs of tourists strolling near the Table Rock heard the loud bang of the parachute being partially released.

"At first we didn't realize what it was," said Dominic's sister, Maggie, 16. "But then the kids said they realized it was a parachute that shot out. It didn't open. Scary. Weird."

"The rider was wearing a Mae West-style life preserver, with a rocker-propelled parachute attachment," said Constable John Gayder of the Niagara Parks Police. "The parachute failed to deploy."

"It's like hitting cement," Dispatched Thomas Detenbeck said of Overacker's landing in the churning mist at the base of the falls. "I don't really think people respect the power of the falls."

The jet ski became lodged in the rocks near the post where a fiberglass barrel ended up in June when Stever Trotter of Fort Lauderdale, Fla., and Lori Martin of Columbus, Ga., went over the falls together. Later the jet ski came loose and washed down the Niagara River.