NEW YORK – Not even two weeks old, the allegations that Buffalo developer Louis Ciminelli engaged in bribes and bid rigging to win lucrative state contracts could grow even more serious in the coming month.

Ciminelli, head of one of the state’s largest construction contractors, and two other company executives charged in the case could find themselves facing a grand jury indictment before their next court appearance on Oct. 24.

[RELATED: A chronology of the Buffalo Billion and the federal probe into it]

Unlike the current complaint, an indictment would indicate a grand jury believes a crime was committed and would require Ciminelli and the others to enter a not guilty plea if they intend to challenge the charges against them.

“Don’t know,” Daniel C. Oliverio, one of Ciminelli’s lawyers, said Monday when asked about an indictment. “That’s up to the government.”

Ciminelli and the other company executives – Michael Laipple and Kevin Schuler – appeared in federal court here Monday, the latest step in the pay-to-play prosecution surrounding the Buffalo Billion. 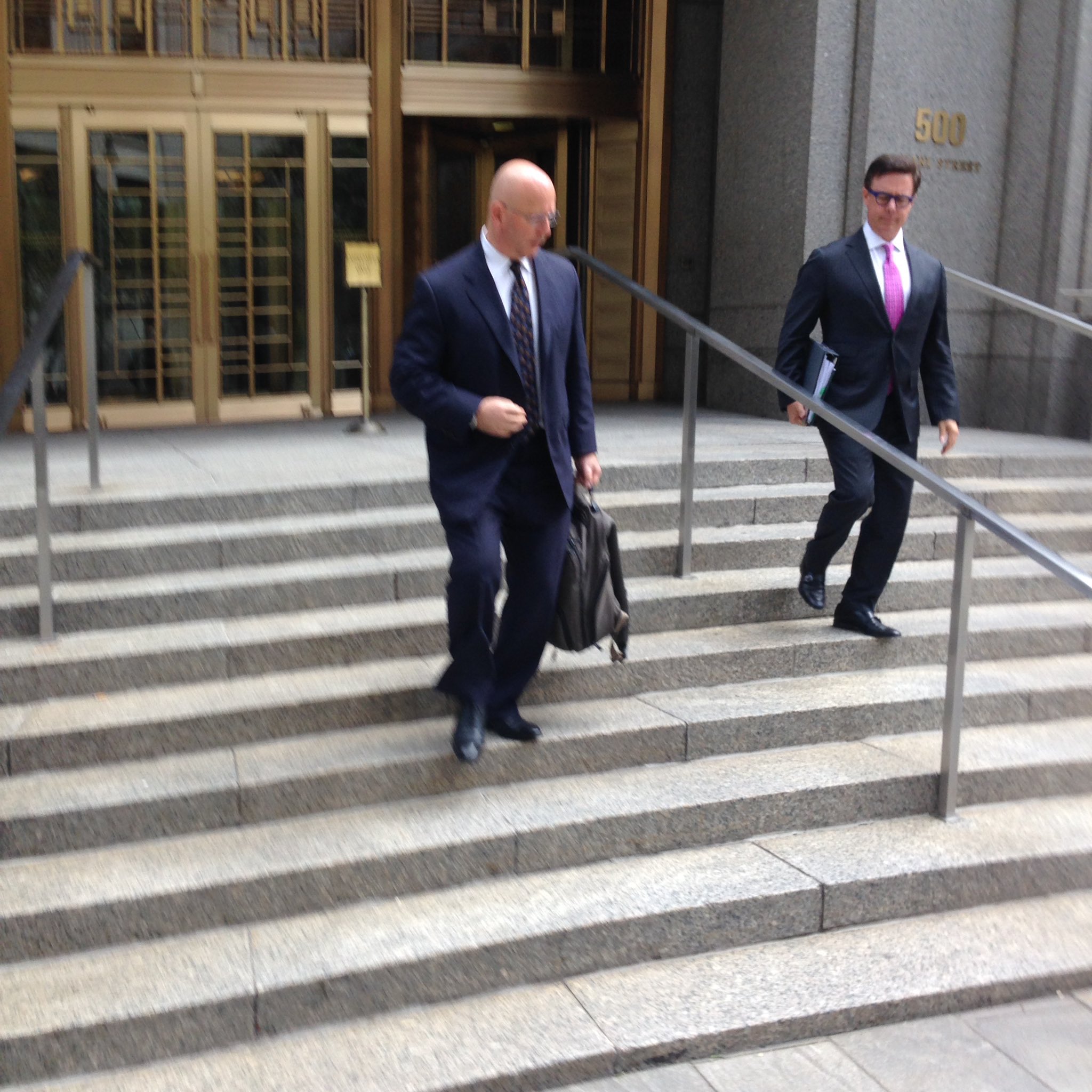 The federal judge who oversaw their appearance released them on bail and ordered them to surrender their passports and other travel documents.

Ciminelli, caught up in a public corruption probe by U.S. Attorney Preet Bharara, is one of nine defendants charged in a criminal complaint brought by federal prosecutors.

At the core of the case is the allegation that Ciminelli, Laipple and Schuler bribed a former Albany lobbyist in an effort to gain an unfair advantage over competitors across New York.

The criminal complaint against the three men accuses them of conspiring with two others – Alain Kaloyeros and Todd Howe – to defraud the Buffalo Billion, state’s taxpayer funded development program.

[READ: Criminal complaints against Howe, Percoco, Ciminelli and others]

The allegation is that Ciminelli’s company paid Howe, a former lobbyist, a “consultancy” fee that, in reality, was a bribe to help the developer win contracts. Kaloyeros, one of Gov. Andrew Cuomo’s top development advisers, is president of SUNY Polytechnic. He has been put on an unpaid suspension.

“Don’t rush to judgment,” Oliverio said Monday when asked about the government’s case. “There’s still a lot to be said.”

LPCiminelli released a statement Monday saying: “All LPCiminelli company officials acted lawfully and professionally. We are confident they will be cleared of all charges.”

Dressed in dark suits and ties, Ciminelli, Laipple and Schuler said little during Monday’s court appearance, their first in a courtroom here. They appeared in a Buffalo courtroom on the day they were arrested last month.

Ciminelli’s court appearance also coincided with the news that DLA Piper, one of the nation’s biggest law firms, will be joining Ciminelli’s defense team. The firm has extensive experience with white collar criminal cases.

Assistant U.S. Attorney Robert Boone would not comment after Monday’s court appearance but, in court, said the defendants are “charged with very serious crimes.”

Boone also declined to comment on the possibility of an indictment, but several sources familiar with the case indicated an indictment is likely given the 30-day deadline attached to the current complaint against Ciminelli, Laipple and Schuler.

The only alternative would be for the prosecution and defense to agree to an extension beyond the 30-day deadline, a possibility some described as unlikely given the large number of defendants and the seriousness of the charges.

Without that kind of extension, the deadline facing prosecutors would arrive before the defendant’s next appearance later this month.

Well known across Western New York, Ciminelli is active in several civic and charitable organizations, including leadership positions with the Albright-Knox Art Gallery and the Buffalo Philharmonic Orchestra.

He is also a major political player, a contributor with a reputation for giving to Democrats and Republicans, a developer with access to virtually every governor since George E. Pataki.

Prosecutors, in their complaint against Ciminelli, point to his political contributions and claim they were used to buy him access and influence in Albany and ultimately win more state contracts.

Over the years, LPCiminelli has emerged as one of the state’s premier developers, winning contracts such as the $1.3 billion Buffalo school reconstruction program and the $373 million project to build the University at Buffalo medical school downtown.

Those deals helped make Ciminelli one of the nation’s 150 largest contractors and helped the Buffalo company gain inroads into larger markets throughout the East Coast and Midwest.