The Buffalo Bills are preparing to try to score a rare win Sunday at Gillette Stadium, where they've beaten its occupant, the New England Patriots, just once in the facility's 14-year history.

The day also marks 11 years since the Bills were part of another uncommon occurrence. Actually, it was a first-time occurrence, as they made history with the New Orleans Saints on Oct. 2, 2005.

In August 2005, Hurricane Katrina devastated New Orleans, with severe flooding submerging the city and damaging countless houses, buildings and landmarks, including the Saints' home, the then-Louisiana Superdome. The physical harm Katrina did to the Superdome forced the Saints to play their 2005 home games elsewhere.

With Katrina — and the intense, deadly effects of it — hitting shortly before the opening of the NFL season, New Orleans' team was forced to scramble to find temporary home stadiums.

The Saints' "home opener" was played against the New York Giants, at Giants Stadium in New Jersey. Two weeks later, the Saints played a more comfortable, natural home game, although it was still a neutral site in some respects. They took on the Bills at the Alamodome in the first-ever NFL game in San Antonio, about an eight-hour drive from New Orleans.

Buffalo opened the scoring on a one-yard Willis McGahee plunge, but it was mostly Saints kicker John Carney from there. Carney drilled four field goals and quarterback Aaron Brooks ran one in from four yards out to lead New Orleans.

It was a forgettable offensive day for the Bills during an era filled with them. Buffalo was outgained, 333 yards to 208, as an ineffective J.P. Losman (7 of 15  for 75 yards with an interception) was replaced at the start of the fourth quarter by Kelly Holcomb, who was 3 for 6 for 28 yards. McGahee rushed 16 times for 84 yards and the score and added two catches for 16 yards.

Meanwhile, for the Saints, Deuce McAllister ran for 130 yards on 27 totes while Donte' Stallworth torched the Bills' secondary for 129 yards on eight receptions.

Bills kickoff return extraordinaire Terrence McGee provided one of the game's top highlights, although it didn't result in anything on the scoreboard. After a Carney field goal put New Orleans up, 13-7, late in the first half, McGee fielded the ensuing kickoff at the 15.

He proceeded to make numerous cuts and jukes to elude defenders while running an adventurous path that took him sideline to sideline and just about everywhere in between. McGee changed directions many times and broke a handful of tackles before being tripped up just inside the 10-yard line by a Saints defender and Bills tight end Mark Campbell, who both fell to the turf. When the wild, exhaustive play was over, the first-half clock had nothing but zeroes, meaning McGee's great effort would not lead to any points. 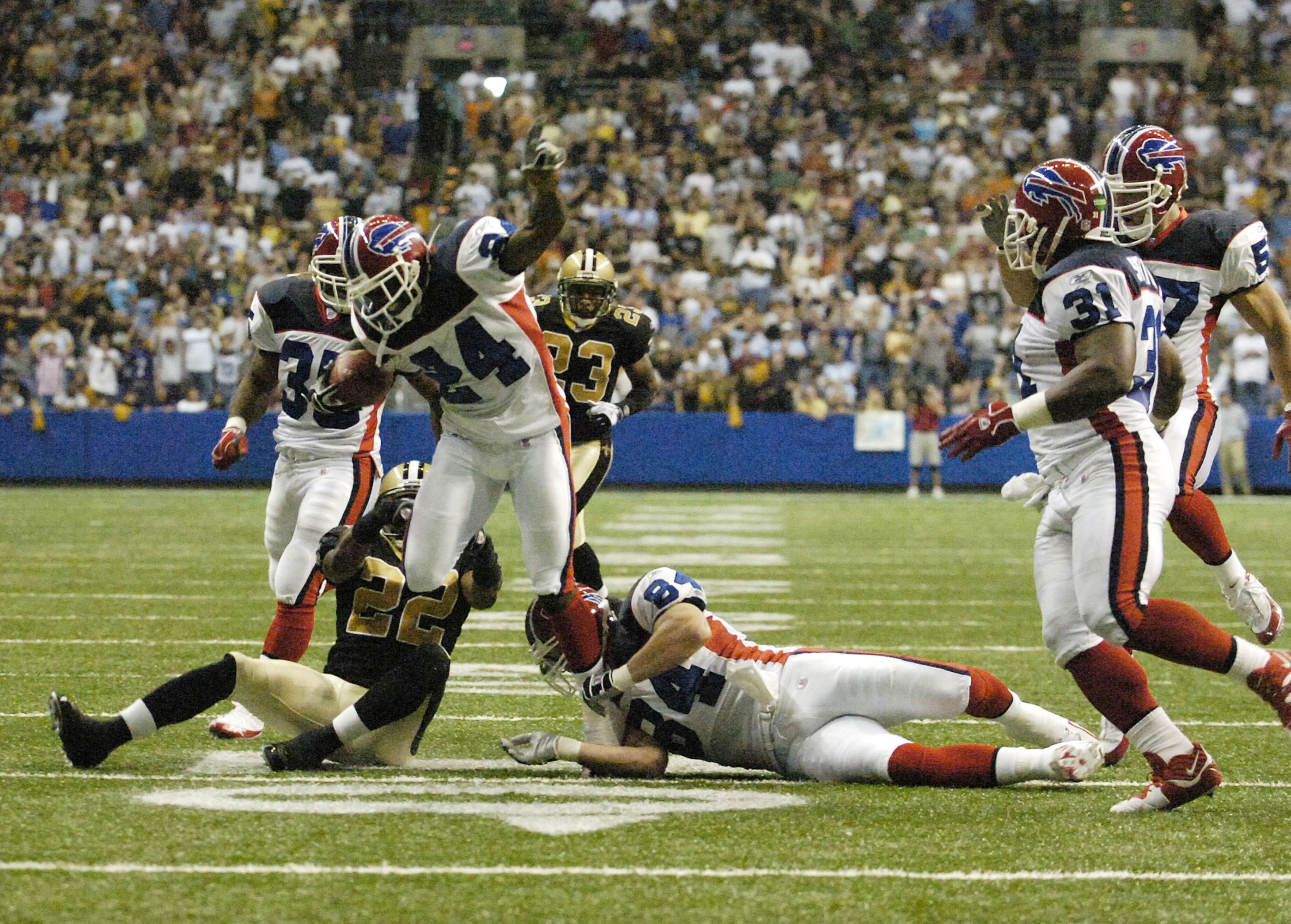 Terrence McGee is tripped up around the 10-yard line, halting his attempt for a kickoff return touchdown late in the first half against the Saints in 2005 at the Alamodome. (News file photo/James P. McCoy)

New Orleans would play two more games in the Alamodome during that 2005 season and hosted its other four home games at LSU's Tiger Stadium in Baton Rouge, La. The Alamodome had 65,000 seats at the time and 58,688 were in attendance for the Bills-Saints matchup.

No NFL regular-season games have been played in San Antonio, which has one of the 10 largest populations among U.S. cities, since.

An excerpt from Mark Gaughan's News story in advance of the Bills-Saints contest in the Alamodome:

A less-than-capacity crowd is expected in the 65,000-seat Alamodome, and no one is certain what kind of Saints spirit to expect in this city, deep in the heart of Dallas Cowboys territory.

"I'm hoping there's 65,000 people that are cheering the Saints on and it's loud," said New Orleans coach Jim Haslett. "I don't know. I don't know what to expect.

"I would think, if they were coming to the game, they would root for us, but I'm not really sure. I know we sold more tickets to the Atlanta game because they want to see Michael Vick."