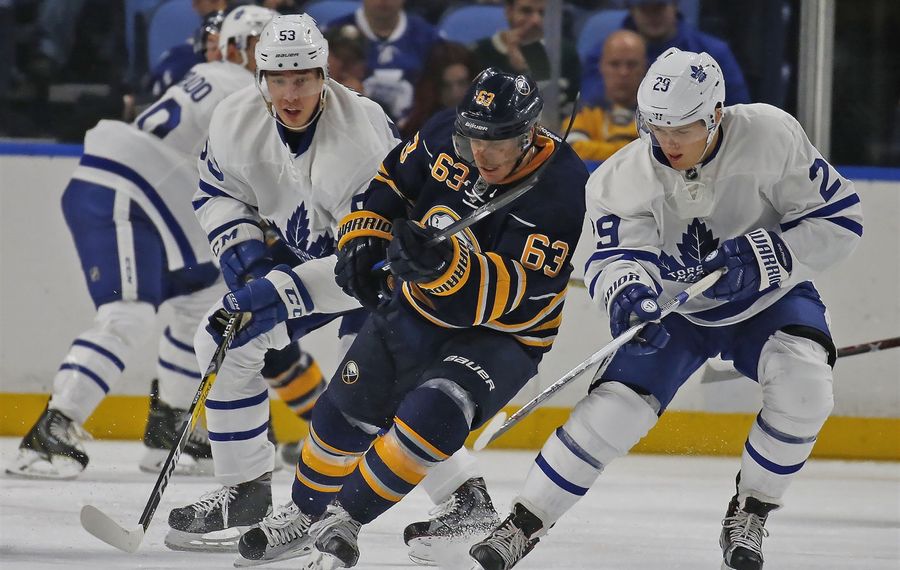 There’s a lot of gory video from the Sabres’ 8-1 loss to Toronto on Friday night. There are defensemen letting players get open. There are forwards missing assignments.

Most of the video will get deleted from Buffalo’s files.

“The best thing about this game is it’s over now,” coach Dan Bylsma said in KeyBank Center. “We can put it away and go back to building and implementing how we want to play.”

Rather than beat his team over the head with the ugliness, Bylsma will return to practice Saturday with clips of what he expects from the Sabres this season. There will be slides of aggressive forechecking, pinching defensemen and players collapsing in front of their goaltender.

It’s a good thing the video package was pre-produced because the Sabres won’t find those things in Friday’s tapes.

“We definitely didn’t prove ourselves at all,” forward Nicolas Deslauriers said. “Just as a team, especially me, I think I didn’t prove anything out there, so we’ve just got to be better.

The Sabres were in a 4-1 hole after one period and 7-1 deficit after two. It’s just preseason, but it was in stark contrast to Buffalo’s first three exhibitions. The team had limited opponents’ quality chances, but the Maple Leafs had to feel like they won the lottery with the majority of their 40 shots on goaltenders Jason Kasdorf and John Muse.

“Whenever you lose by a score like that, I don’t think anybody’s going to be happy,” Kasdorf said. “You’ve just got to go back to the drawing board, figure out what the problem was and get better from here.”

Bylsma mercifully pulled Kasdorf after 20 minutes, with the Leafs scoring on four of their 13 shots. They scored on three of 13 against Muse during the second period. Few goalies would have stopped any of them as Toronto got to the front with pucks and bodies to turn the game into a rout.

There was injury to the insult as well. Right wing Nicholas Baptiste suffered a lower-back injury during the second period and did not return. Defenseman Dmitry Kulikov, who made his Sabres debut, survived a scary incident with 8:21 to play.

Toronto’s Colin Greening clipped Kulikov behind the play, and the defenseman soared into the boards in front of the Leafs’ bench. Kulikov hit the door, which popped open on contact. Kulikov writhed in pain and was helped to the dressing room.

“He’s got a bruise on his backside, but at this point in time it’s not more than a bruise,” Bylsma said.

Other players bruised their chances of making the Sabres’ opening-night roster with poor showings.

“Plenty of opportunity out there for a lot of guys with the lineup that we had, and it was an opportunity for them to compete and earn a spot or the possibility of earning a spot,” Bylsma said. “They didn’t do that.”