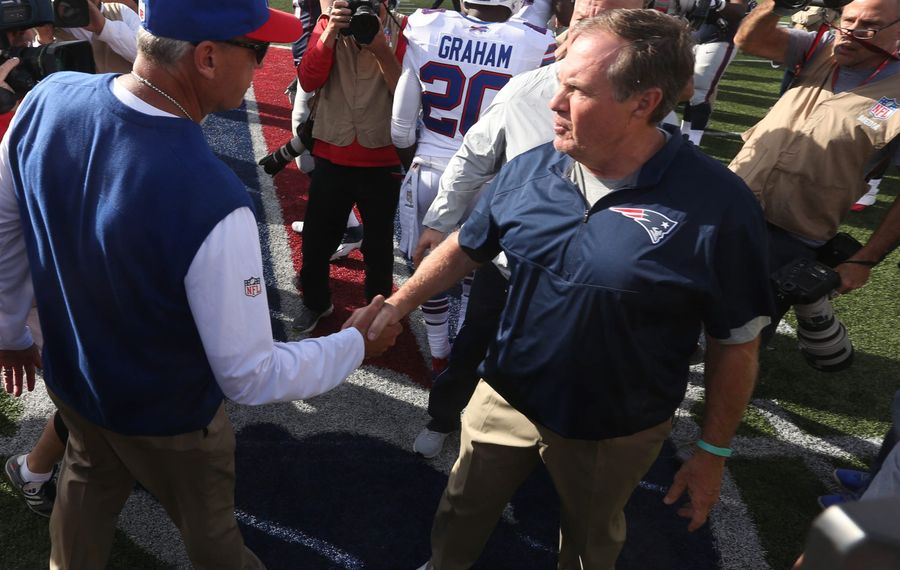 It was another busy week. The Bills dominated the submissions, but I was glad to get questions about baseball and golf. I enjoy Bills season as much as anyone. But it’s nice to be reminded that there are things other than the almighty NFL to entertain us.

Hey, Saturday is the first day of October, which means the baseball postseason begins next week. I’ll be falling asleep in front of the TV in the sixth inning any time now. The Ryder Cup got underway at Hazeltine on Friday. Hockey season is right around the corner.

There’s a big football game in New England on Sunday, of course. Two weeks ago, the Rex Ryan era hit its low point. A win against the Pats would even their record at 2-2 and give them wins over Super Bowl contenders in successive weeks.

Vinny Guadagna asks: The game is a few days away. Rex is already chirping the Patriots. Why would he want to “wake the beast?” Pump the brakes, Rex.

Sully: Ryan says he’s not about to change his ways. It’s who he is and he’s not going to be phony and try to operate like Belichick. The guy can’t help it. He likes playing the clown. But you do make a good point.

Why would Rex want to get under Belichick’s skin before a game? He’s 1-9 against the Pats since his second Jets team stunned them in a road playoff game in January 2011. Maybe he ought to consider a new approach.

It was funny when Ryan jumped on the Julian Edelman conference call. But I can’t imagine Belichick appreciated Rex asking Edelman if he would play quarterback on Sunday. Remember, Belichick held Wes Welker out of the first series of that playoff loss in 2011 because Welker tweaked Ryan about his foot fetish to the media.

Belichick uses every conceivable thing to his advantage. He probably doesn’t need any extra motivation or tactical edge against the Bills. But it wouldn’t shock me if he held up Ryan’s stunt to his team as an attempt to embarrass the Pats’ franchise.

Rex’s act can work against him. I’m convinced that other coaches take pleasure in beating him. He’s a self-promoter in a profession where false humility and drab cliches are the norm. I imagine he didn’t win any friends in the profession with his scapegoating of Greg Roman.

716law asks: If Tyrod has another pedestrian passing performance Sunday, how big of an impact will it have on his long-term deal?

Sully: It won’t help. If Taylor expects to be a franchise quarterback and justify a $90 million extension, he needs to go on the road and beat good teams. Sunday in New England would be a swell time to start. No more excuses.

No Sammy Watkins? Against the Pats? This is when an elite quarterback rises up and shows he can be the best player on the field. Taylor has to be the difference against the Pats, who are the standard in the NFL. The same goes for Ryan.

Do I have confidence that Taylor can do it? No. He wasn’t good against the Pats last year. In the first game, the Bills had 29 passing yards at halftime. The Pats kept him in the pocket and sacked him eight times. He had 242 yards passing, but 153 of those came after the Bills fell behind, 37-13, late in the third quarter.

Taylor has lost the last five games with the Bills tied or within a TD in the fourth quarter. He has yet to win a game when he throws 30 passes. If he wants to build a case as a $90 million player, he needs to get going.

@sanford117 asks: What do you make of last week’s alleged Tom Coughlin visit to OBD?

@Zbarringer asks: What would you think of Coughlin as Bills HC?

Sully: Entries 3 and 3A. Rumors were flying last Sunday that Coughlin, the former Giants head coach, had met with the Pegulas at New Era Field. Veteran Rochester scribe Sal Maiorana confirmed it, though the NFL and Coughlin’s agent denied the report.

Whatever the case, it would make sense for the Pegulas to speak with Coughlin, if only to get his opinion on their operation. They’ve reached out to veteran football men before, and were ready to make Bill Polian lord of the operation before Polian decided against it after the 2014 season.

A successful coach’s perspective can only help. If Ryan gets fired and they’re looking for a coach, Coughlin would be a strong candidate. Things went south with the Giants. But he beat the Pats and Tom Brady in two Super Bowls. He commands respect in the NFL and could assemble a strong staff.

Some say Coughlin is too old at 70. Really, after a string of coaching failures, several of them young, first-time guys, you’ll shun a guy because he’s old? Coughlin is younger than Donald Trump, a year older than Hillary Clinton. So it’s OK to do the most important job on Earth at age 70, but the old codger couldn’t coach a football team?

There would be other good candidates. Of course, after what the Pegulas did to Greg Roman, the Bills should feel lucky that any coach would want to work for them.

Richard Hamister asks: What do you think about Phil Mickelson taking ownership of this year’s Ryder Cup? I know you aren’t a Phil fan, but he is having a strong year for a “middle aged” PGA Tour pro.

Sully: I’d say No. 15 in the world is pretty good for a 46-year-old. That’s not middle-aged by PGA standards, it’s plain old.

Mickelson put his neck on the line by becoming the dominant voice of the U.S. Ryder Cup team. His whining about past captains and rationalizing his past failures in the event (16-19-6 coming in) were tough to take. That made it even more imperative for the Americans to win back the Cup and justify his arrogance.

The U.S. got off to a great start Friday, winning the morning foursomes to sweep a session for the first time since 1981. Mickelson and Rickie Fowler came back to beat Rory McIlroy and Andy Sullivan, 1-up, despite Phil spraying his driver all over the lot. Serves Europe right for trusting a guy named Sullivan on a golf course.

Jack Gray asks: Would you vote for Gary Sanchez for Rookie of the Year, even though he has played less than a third of the season?

Sully: Yes. Sanchez has been the AL’s best and most sensational rookie. It’s not about how many games he’s played, but his impact on the sport and the Yankee franchise. He revived hope for this season and the future in a team that moved players at the trade deadline for the first time in 27 years.

His stats are staggering. Through 51 games, Sanchez had 20 home runs, 42 RBIs and a 1.050 OPS. That projects to 64 homers over a full season. He’s also a terrific defensive catcher with a great arm. I’d give him the edge over Detroit starter Michael Fullmer, who has been a vital contributor in the Tigers’ rotation.

Partial seasons are common, if not as short as Sanchez’s. He’d still get my vote, and I’m a Red Sox fan.