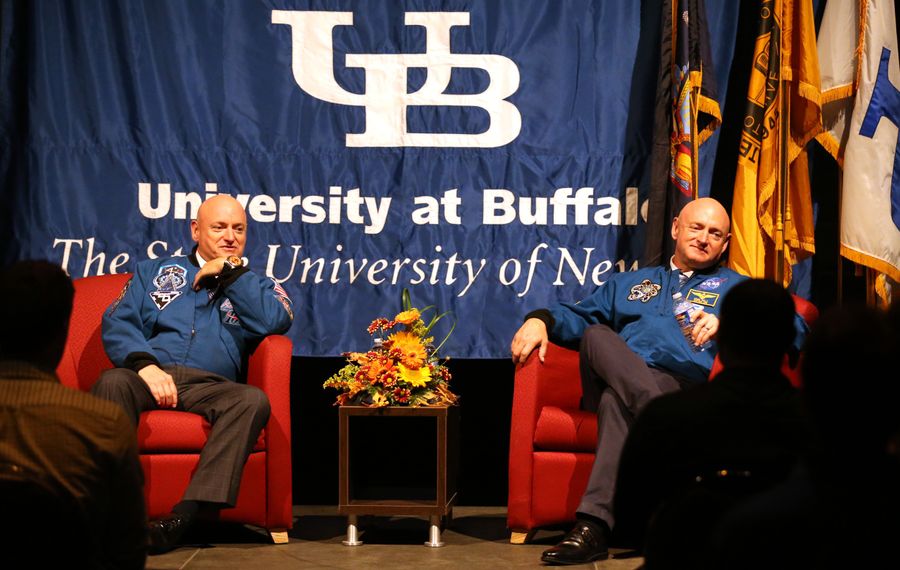 Scott Kelly, who has only been back on Earth for six months after his yearlong space expedition, has spent more than 500 days in space - his brother Mark has 55 days. Scott’s year in space was part of NASA’s Twin Study, a study designed to test the effects on the human body after spending a year in space. Mark, who remained back on Earth, was the control subject for the study that was done in preparation for sending humans to Mars, a task NASA wants to accomplish by 2035.

After spending so much time in space, you may think that the Kelly brothers have their heads in the clouds, but seeing Earth from a new perspective has grounded the duo in more ways than one.

“You always hear about news on Earth, and it’s generally bad news, it just makes you think that we can do better and make a positive change,” said Scott Thursday evening at the UB Center For The Arts before a talk the brothers were doing as a part of UB’s 30th annual Distinguished Speaker Series.

Mark and Scott Kelly are among the top of their class, both have been to space four times, a feat only two other astronauts in their 44-member class have achieved. Both former Navy captains,the brothers have accomplished more in their 52 years than many people in their whole lives.

“Every time I would fly over the Mediterranean I would think about those refugees on those boats and the little kids dying. It looks very peaceful and it really isn’t.”

Mark was sitting on the right side of his brother behind a conference table. Both bald, Scott wore a gray box-plaid jacket with a slightly loosened tie, and Mark a plain white shirt.

“You don’t see any political borders between countries [in space], so it makes it look like we’re all in this together,” added Mark.

“(Space) definitely has made me better at dealing with difficult living conditions,” Scott said.

“In the space station for a year you learned to live with very little, you don’t have running water for instance, the food is all irradiated, not having gravity makes it difficult to live,” said Scott, who in turn feels that he’s able to better relate to all of the people who experience conditions like these. “When I see those commercials about how many people in Africa have to live without running water and have to walk 10 miles every day to get water and not having to get water and scooping the muddy water out of the river, I feel we need to do better at providing people with their basic necessities like clean water.”

Neither Scott nor Mark are strangers to adversity of their own. Scott, who was quick to reaffirm what we all could have probably guessed, that living in space is hard, was faced was readjusting to life back on Earth.

“In space, you’re basically told what to do, when to do it, how long to take doing it and what the procedure is. Once you’re back, you don’t have that anymore so you kinda feel directionless,” Scott said about his transition back to living on Earth. But he went into it knowing that it would be difficult, which only made him want to do it more. “The reason I wanted to do it is because I knew it was going to be hard, which means that it’s a challenge, which means once it was done I would feel much more fulfilled.”

Fear wasn’t something that made the brothers run away from their challenges- not even while they were orbiting the Earth, not even when a Russian satellite was on the same path heading straight toward them, and certainly not when Gabby Gifford, congresswoman and wife of Mark Kelly was shot in the head during a 2011 attack. Now, after a long, difficult recovery, Gabby and Mark speak about gun control laws through their political action committee, Americans for Responsible Solutions.

But not because he feels obligated to as a public figure, only because he wants to.

“I don’t feel an obligation to promote things that I care about, but that doesn’t mean I’m not going to do it,” said Mark.

What do Scott and Mark not only feel obligated to speak about but a desire as well? Science and math education, and the space program that they say not only has done so much for them, but our nation.

Both brothers have retired from their careers as NASA astronauts and will not return to space as a part of the space program. They miss it, but they describe coming home as “being reborn on Earth.”

So what now? Mark is working on gun violence issues with his wife and is a co-founder of an aerospace company, and Scott? Well, he’s just trying to get his feet back on Earth. His plan for that is simple, write a book and work with the United Nations.

And regrets? They only have one: not joining their high school’s golf team.

Emily Bingham is a sophomore at Mount St. Mary Academy.