Summer is over and the meadows of Delaware Park have turned rather golden but are no less magical.

Every day is a portrait of bliss sprawled along the 350-acre lawn.

It’s easy to take it for granted, especially for people who have spent their lives running around it, playing sports on it, or driving past it.

[PHOTO GALLERY: A day in and around Delaware Park]

Each afternoon is a series of vignettes, each alive with activity until the orange afternoon sky melts into a silky black. Alone they may seem mundane, but together, they’re awe-inspiring.

The squeaking of sneakers and the thumping of basketballs is a symphony of summer on the courts off the Jewett Street entrance. David Blumberg shoots and he scores, cheered on by friends both new and old. It’s a four-on-four pickup game, and whoever wants to play can come out and join. The 19-year-old from Tonawanda comes about once a week and plays for a couple hours, depending how hot it is. 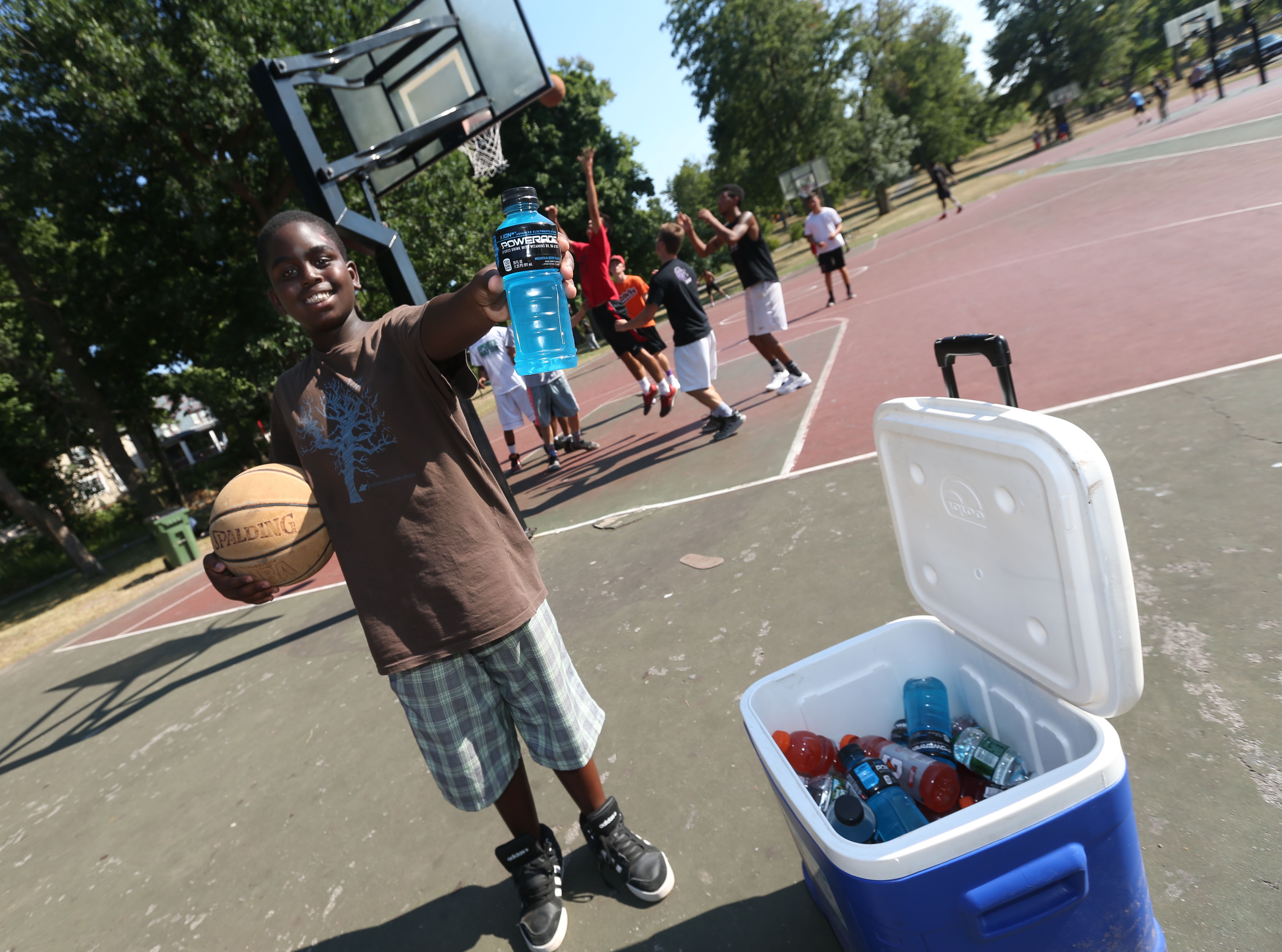 Marcelino Long, 10, of Buffalo sells energy drinks and water to the basketball players all summer long. He’s saving up to buy a hover board. (Sharon Cantillon/Buffalo News)

Marcelino Long, a 10-year-old from Buffalo, stood under the backboard next to a blue cooler. He was there every day selling Gatorade, Powerade and water bottles for $1 each to the sweaty players. He’s saving up to buy a Lamborghini hoverboard.

“I don’t want them to be dehydrated,” he said.

On this day, it was 92 degrees in the sun, but Bernard Bell prefers coming to the park in the summer. Wearing only basketball shorts and a pair of headphones blasting Peewee Long’s “Costs To Be Me,” he glistened while doing eight pull-ups on a Parcourse Fit Center bar. He ran to the park to exercise before his 11 p.m. shift at Erie County Medical Center in environmental services. 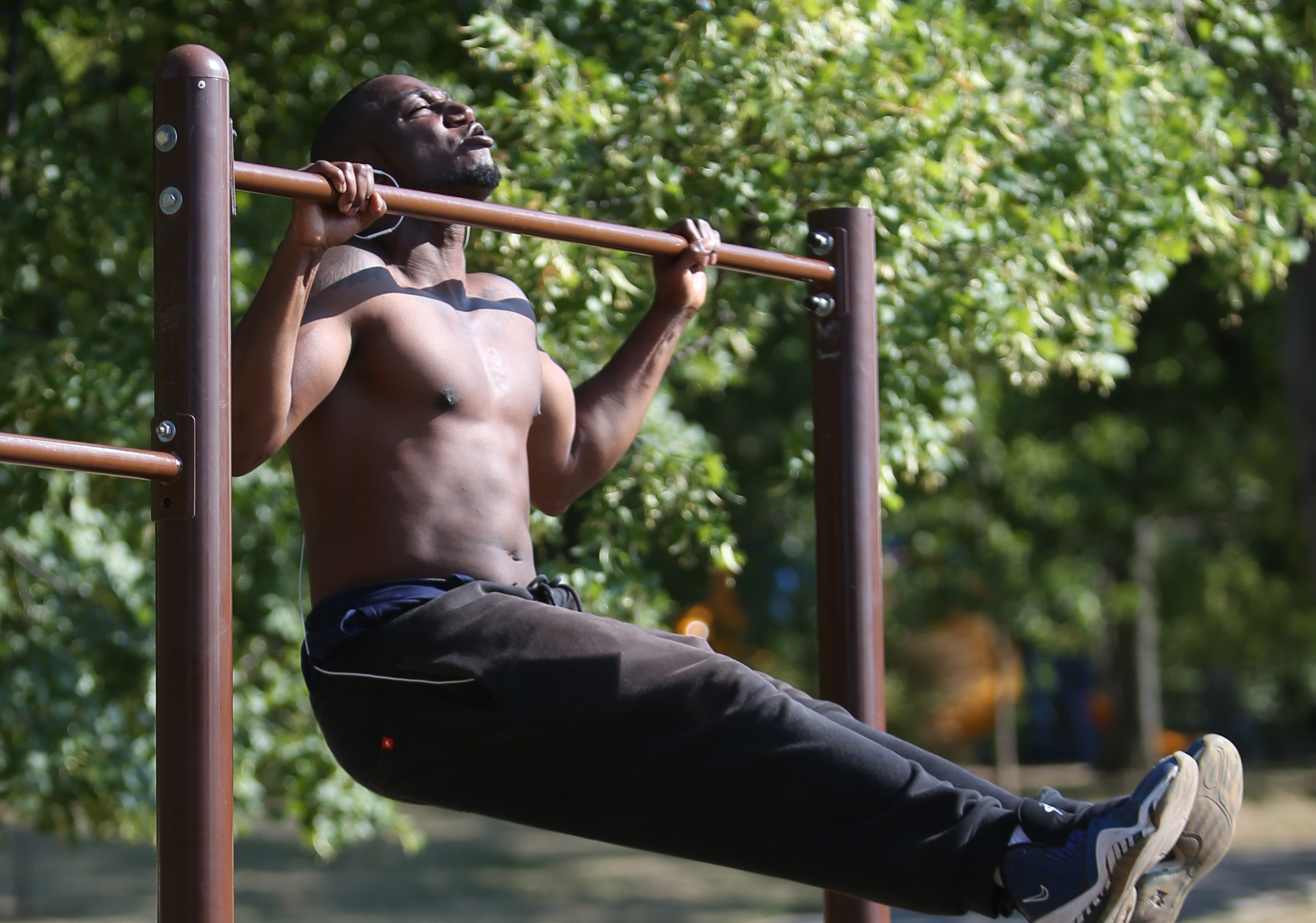 Bernard Bell does pull-ups at Parcourse Fit Center. Though he has a gym membership, Delaware Park is close to his house and very convenient. (Sharon Cantillon/Buffalo News)

The 26-year-old lives in the neighborhood, one reason he prefers the park to the ECMC fitness center and LA Fitness.

“I feel like I can really breathe,” he said. “It’s peaceful. It brings peace.”

Jogging past the Parcourse Fit Center on ring road was Monique Bennefild of Cheektowaga and Shanise McPhatter of Buffalo. The women in spandex capris and Nike sneakers slowed to a run and caught their breath. They’re part of Black Girls Run, a national group organized through regional Facebook pages. Six women met at the park that afternoon to motivate each other to run.

“I love (running in the park),” Bennefild, 28, said, adjusting her sea green cap. “Exercising, not just running. Stretching, meeting up with friends, people watching. And when it’s not so hot, sunbathing.”

The girls laughed and waved as they picked up their speed. Around the bend, the Buffalo Braves coed softball team was throwing the ball back and forth to warm up before their game. On the inner cinderpath behind them was an 8-year-old on a pink bike attempting to stay upright. Serenity Rivera, sporting pink knee pads, pink elbow pads and a purple helmet, was prepared to learn to ride the bike given to her by Big Brothers Big Sisters of Erie County. Her 20-year-old brother Juan Martinez held on to the handles and ran with her until she felt ready to pedal on her own. Her mother, Ivette Rivera, was ready with a camera.

“You did it! You’re doing great, Serenity,” she cheered as her daughter whizzed past.

“Look out people, look out!” Serenity yelled, beaming as she swerved to a stop.

Her mom brought her out for fresh air and exercise, a break from the TV and PlayStation. It also turned into quality time with her brother.

“It wasn’t as hard as I thought,” Martinez said. “I taught my other sisters to ride bikes.” 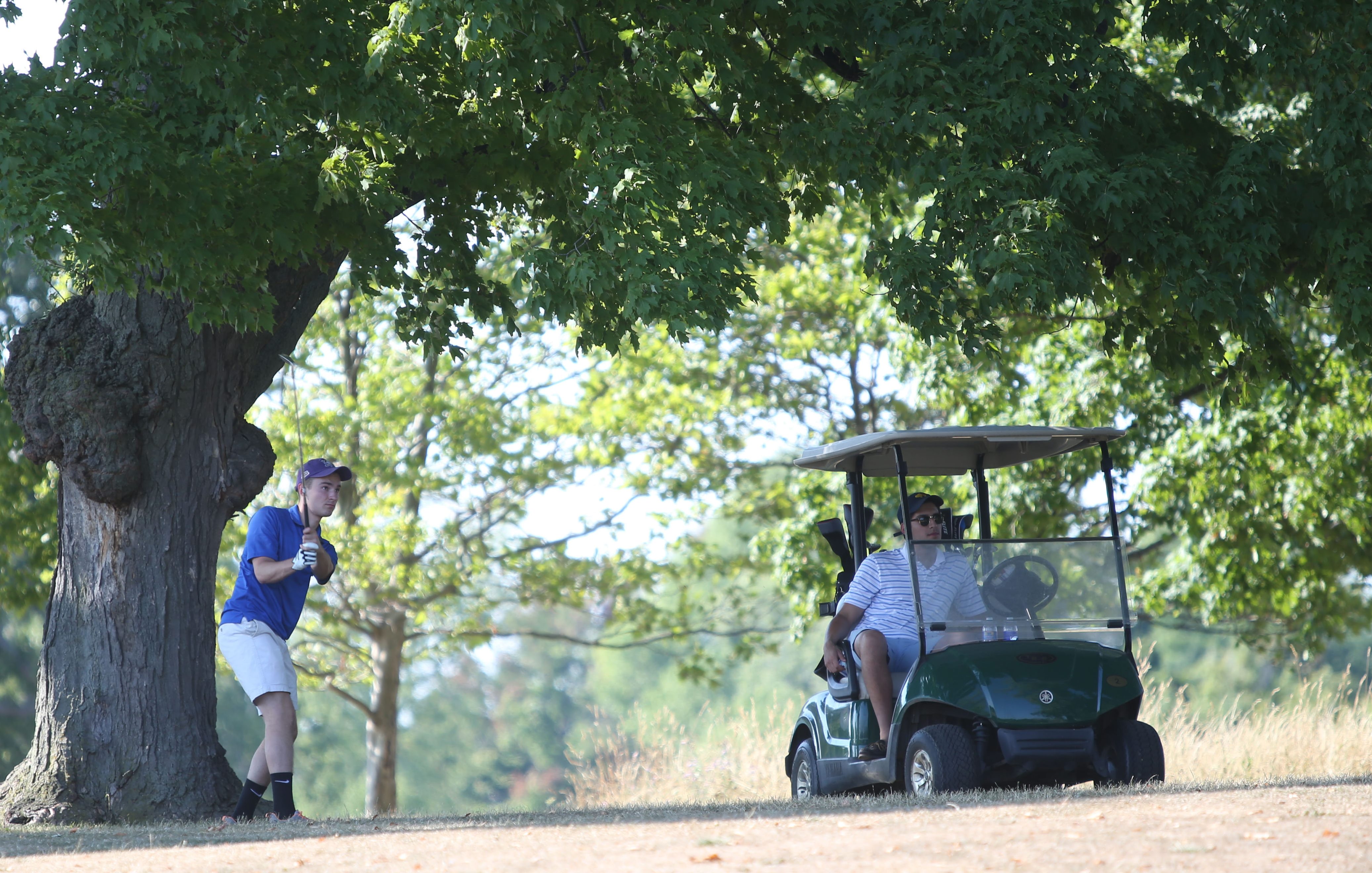 Inland on the golf course, Collin Rampado, 19, and James Ghosen, 20, were circling in their cart, looking for a missing golf ball. They gave up and went on to the 12th hole. They don’t golf much; in fact, it was their first time on the course this summer.

“We’ve been talking about it awhile,” Ghosen, of North Buffalo, said. “I just bought these clubs, actually. So I’ve been nagging him, trying to get out.”

They weren’t doing so well, he said. About a minute later, “Yes!” was overheard from a short distance. “That was my best putt ever.”

The vast field behind them was empty except for two men kicking a soccer ball back and forth. Brian Smith and Nate Byrnes had met in that spot about two years before.

“A couple of years ago, I was kicking around on the field over there,” Byrnes, of Buffalo, started.

“All by himself,” Byrnes added.

“I thought, this guys needs help just like I do,” Smith said. “So that was it.”

“That’s right, not very good. It was a regular weekly thing.”

They were more consistent last year and just happened to come out that afternoon, preferring to sweat outside rather than inside their homes.

Five-year-old Tammy stayed cool in the shade. The white-and-brown Jack Russell terrier was timid, but she enjoyed daily morning and evening walks with her owner, Charles Caldwell of Buffalo.

Joe Sadler of Buffalo found some shade under a tree off Meadow Drive, where he napped on a red lawn chair next to his car. He has just gone to Kostas Family Restaurant on Hertel with a friend and decided to come to the park to relax outside. He always keeps the chair in his car.

“There’s a lot of outdoor events in the summer,” he said. “You just never know. “I want a place where I can just sit and relax.” 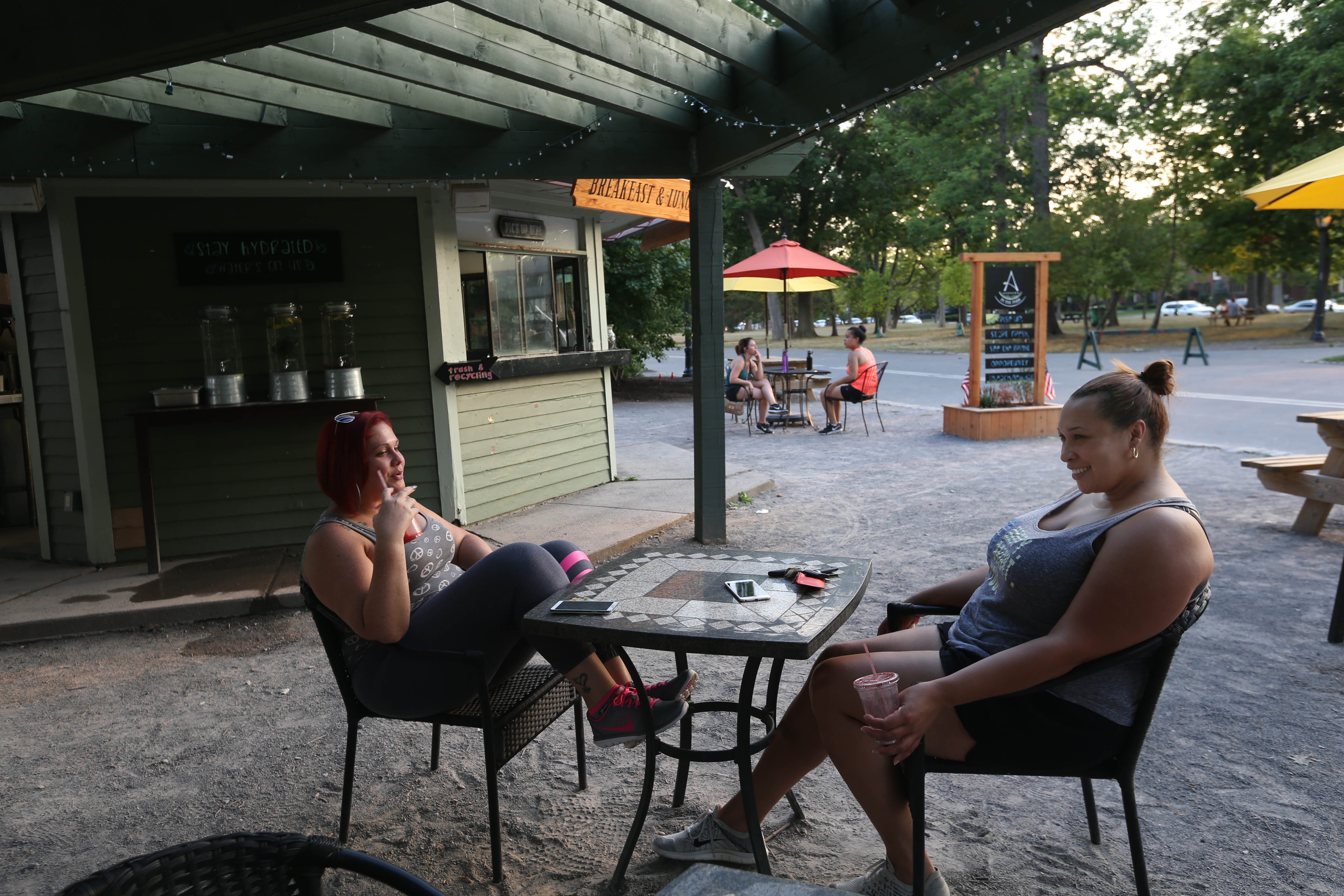 Ann Marie Hernandez, left, and Natalie Gates enjoy some smoothies from Ashker’s in the Park after their walk. (Sharon Cantillon/Buffalo News)

Many parkgoers look forward to ending their games or workouts with juice from Ashker’s in the Park, the seasonal kiosk café offering pita sandwiches, salads, fresh juices and smoothies.

Natalie Gates and Ann Marie Hernandez sat across from each other, slurping up the remainder of their Blue Peach and Caribbean Coral smoothies.

“This walk is about Summer ’17,” Hernandez of North Buffalo said in a sassy voice.

“It motivates you to want to come here,” Hernandez said more seriously. “It’s like, we know we’re going to get a treat just for coming and working out.”

They planned to come the next week for dinner. 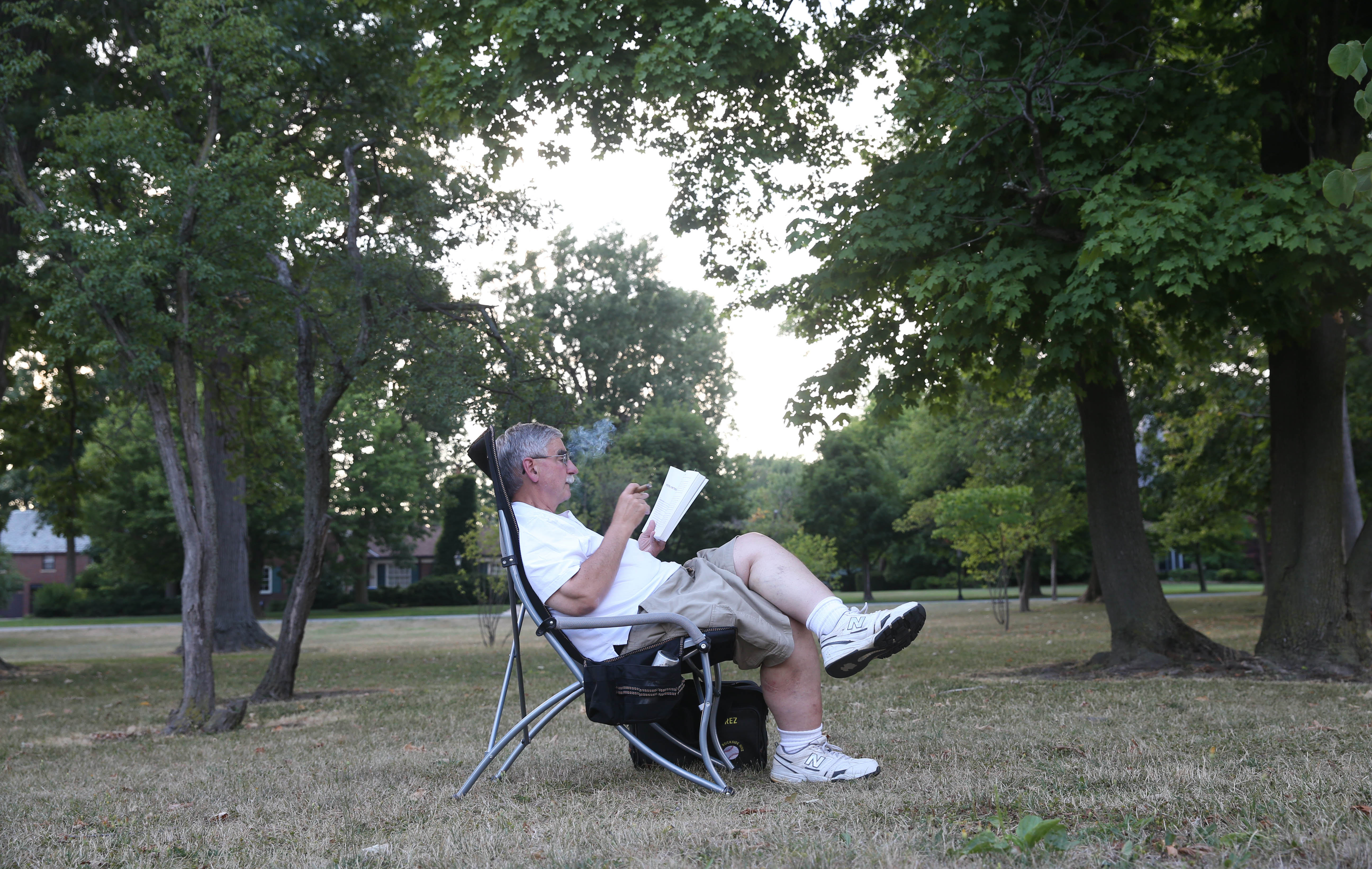 Richard "Duke" Zajac enjoys a book and a cigar in his portable chair. (Sharon Cantillon/Buffalo News)

A short walk up the road, the scent of burning tobacco led to Richard “Duke” Zajac, a staff chaplain at Sisters of Charity Hospital in Buffalo. On his days off, he grabs a shady spot, reads one of four books he’s currently juggling and smokes a cigar. Sometimes he’ll sit by the baseball diamond and catch a game.

It’s his summer ritual, he said.

“This is my backyard.”