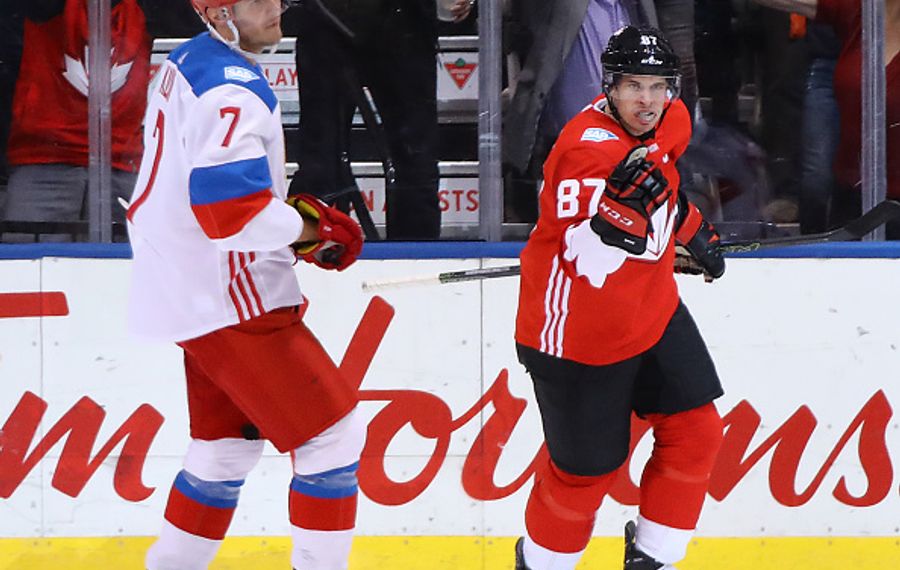 TORONTO -- An entire month's work, and the hopes of a nation, were at stake in the third period Saturday night. Pressed more than it has been at any point in this World Cup of Hockey, Team Canada made sure to answer the call.

With Team Russia goalie Sergei Bobrovsky bent on stealing a win by himself, Canada simply had too much Sidney Crosby and too much Brad Marchand for the Russians to handle.

Crosby fed Marchand for the tiebreaking goal early in the third, the Boston winger's second of the game, and Canada went on to a 5-3 victory Saturday night in a scintillating semifinal showdown before 19,021 in Air Canada Centre.

There was plenty of drama in the latest chapter of the Canada-Russia rivalry among NHL players, which has its genesis with the historic Summit Series that was played 44 years ago this month. Canada trailed for a total of 89 seconds in its three games of group play but fell into a 2-1 hole in this one when Washington's Evgeny Kuznetsov scored for Russia with 3:36 left in the second period.

But Marchand tied the game 72 seconds later on a Crosby feed to get the Canadians even at 2-2 in a game in which they outshot the Russians, 33-15, through two periods.

In the third, Marchand took a Crosby drop pass and burned Bobrovsky on a wrist shot at 1:16. Corey Perry made it 4-2 at 5:48 -- pulling the puck between his legs in spectacular fashion to get it to his forehand -- and John Tavares pushed the lead to 5-2 at 9:22 and that was that.

Sid's dominance: Crosby has won an incredible 23 straight games for Canada since a loss to the United States during pool play in the 2010 Vancouver Olympics. The streak includes his Golden Goal finish to that tournament, the 2014 Sochi Olympics as well as World Championship play and this tournament.

Marchand on Crosby: "One thing that makes him such a good player is his determination and the way he always comes up big in the big games. When you're able to lead at this level of a group of leaders and you're able to take control, it shows how special he is. He created that whole tying goal and ultimately that did lead to turning the game around."

Crosby on Marchand quickly becoming a solid linemate: "It's the way he works on both sides of the puck. We work to gain possession, create turnovers. He does everything well. He's got a great shot. He's got speed, a lot of different things. Every shift you know he's able to generate a lot, and sometimes it's from nothing."

Net result: Bobrovsky was dominant all night, making 16 saves in the first period and 15 more in the second. In addition to its 18-shot advantage through 40 minutes, Canada had doubled the Russians in attempts at that stage. The final shot count was 47-34 as the Russians had 19 in the third period, most in garbage time.

Missing person: Russian captain Alex Ovechkin did absolutely nothing in this one. The Great Eight had one shot on goal and that came with 12 minutes left in the third.

Crosby on Marchand's tying goal: "It was big just because we felt like we were controlling play and doing a lot of good things and were down 2-1. To get that one back pretty quickly going into the third ... was nice to get."

Perry on the feeling after two periods in the Canada dressing room: "It was pretty quiet. There's a lot of guys in there who have been through these situations before. We battled back to get it tied going into the third. ... That was huge. We had good shifts right before that goal and applied pressure and then Sid made a great play to Marchand, who doesn't miss to many of those."

Kulikov stripped: New Sabres defenseman Dmitry Kulikov got schooled by Crosby on Canada's opening goal, getting the puck caught in his skates and getting stripped from behind by Crosby in front of the net. Crosby then quickly turned and went to the backhand deke to beat Bobrovsky at 7:40 of the first period. Kulikov played 17:28 in the game with a minus-1 rating and had one shot on goal. He was not credited with a hit.

The O'Reilly Factor: Sabres center Ryan O'Reilly continued to play the middle of the fourth line between Joe Thornton and Matt Duchene. He played 8:10 and was minus-2, although one of those was Artemi Panarin's meaningless goal with 4.6 seconds left. O'Reilly, like Kulikov, was also victimized for an opposing goal. Evgeny Dadonov got control of the puck behind the net ahead of O'Reilly and fed it in front, where it deflected off Evgeny Kuznetsov and beat Price at 16:24 of the second.

Former teammate/current linemate on O'Reilly: Duchene played with O'Reilly in Colorado and is thrilled to be on his line in this tournament. "He's just gotten better all around," Duchene said of O'Reilly. "As we're all getting older and more mature in terms of your game, it continues to evolve. You refine things and that's what he's done for sure. He's always been a very elite player in terms of how he thinks the game and it's been pretty comfortable to play with him."

On the shelf: Russian center Pavel Datsyuk, the longtime star of the Detroit Red Wings, sat out the game with a lower-body injury. Now that Datsyuk has returned to the KHL, it could mean his career on North American ice is over.

Sunday's game: Upstart Team Europe, which went 2-1 in group play, meets 2-0-1 Sweden in the other semifinal at 1 p.m. on ESPN. The best-of-three final series opens here Tuesday night at 8.