It's hard for non-Division I soccer teams to make noise locally, but the Buffalo State Bengals are roaring relentlessly to get noticed.

Under the guidance of fourth-year head coach Mark Howlett, Buffalo State has flourished. The Bengals' 10 wins in 2015 marked the most since 2008, and the program's two trips to the SUNYAC playoffs under his watch equal the total over the previous 14 years.

The team's hot start (6-2-1) can at least partially be traced back to a preseason trip to England, which you can read about here. Let's get caught up on what's happening over between Grant Street and Elmwood Avenue since:

1) Dramatic start to SUNYAC play: It's forgivable if your neck hurts from watching the end of the first overtime between Buffalo State and SUNY Geneseo, as the end-to-end action - which included four prime scoring chances in the last minute, including Tristan Myers' last-second winner - left fans and players breathless.

Though it was Myers' low shot from a bad angle that nestled inside the far post which ultimately won the game, the Bengals needed two sterling defensive plays - a desperation block from outside back Devonte Black (No. 26) and, shortly after, a sprawling save from goalkeeper Will Banahene (No. 1), who threw himself into the feet of a Knights forward and poached the ball cleanly to deny a sure goal.

You can see video of that wild final minute here, via Buffalo State's video stream. 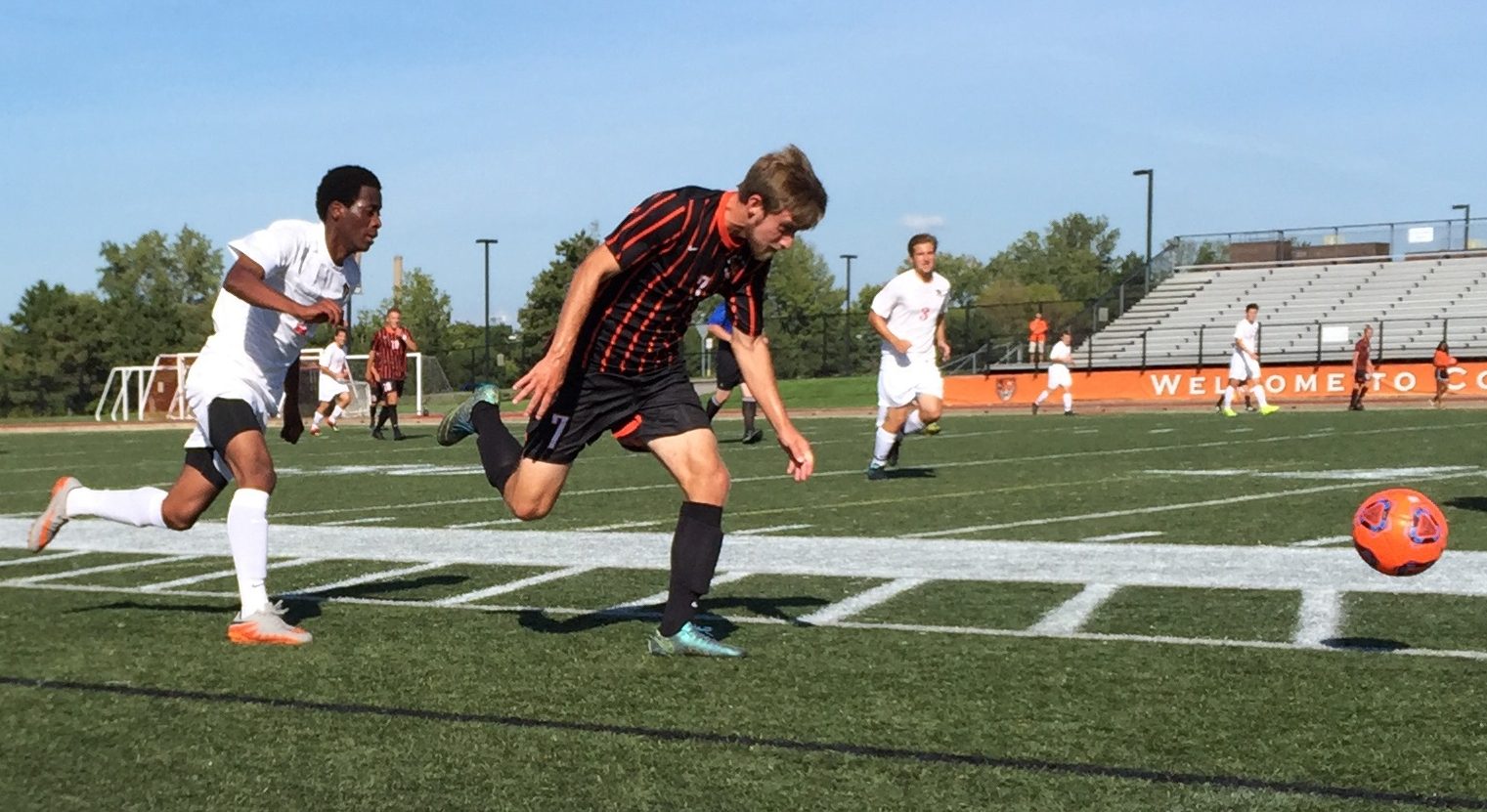 2) Myers picking up for Pavone: When senior captain Luke Pavone (No. 10) was lost for the season with broken toes - he will red-shirt and play his final campaign in 2017 -  the UMass transfer's production and leadership needed to be replaced.

Enter Myers (No. 7), who thrived at times on the wing opposite Pavone last season but only mustered one goal on 23 shots. Now, the junior from Rochester is more than just a dribbling dervish, although he'll leave a defender befuddled at least once a game; he's become more clinical in the final third, adding an end product to the chances he creates with his blend of speed, skill and quickness.

His six goals are tied for the team lead, and he rightfully earned MVP honors at the Blue Devil Classic in Fredonia, which his Bengals won.

3) Few adjustments, but trust in a plan: Most programs would panic upon losing an All-Region player like Pavone; Howlett, who's known Pavone for much longer than just his college soccer tenure, grasps the magnitude of the loss but hasn't let the misfortune dampen his hopes.

"I don't think we're going to do anything different," the head coach responded when asked how Pavone's season-ending injury would affect how he approached the season. "I think someone else needs to step up now; it's a great opportunity for the next person - yes, it's a massive loss, but we'll embrace it and the camaraderie of this group will just go ahead and do it for him even more so." 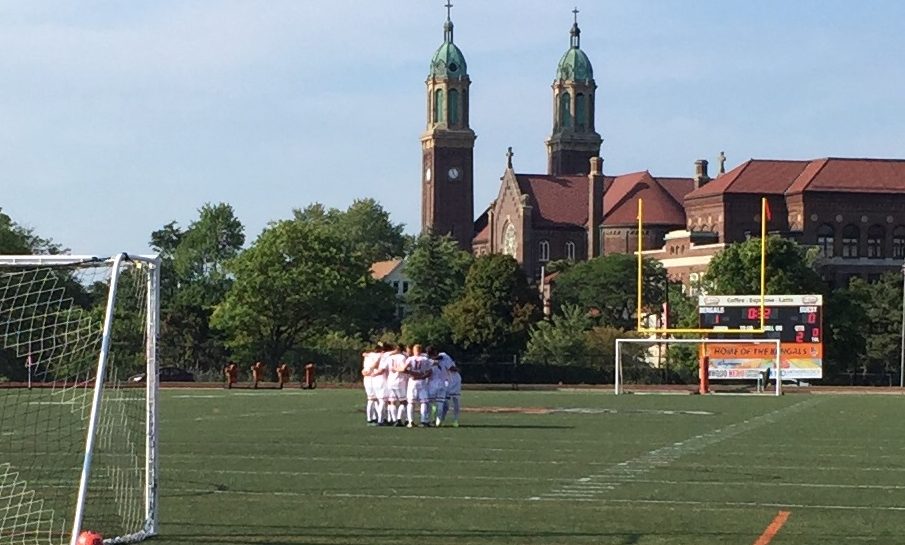 4) Wasson gets the armband: The transformation of Sammy Wasson (No. 17), a 2013 All-Western New York pick from Clarence High School, has been far more evident in his mentality than in his skill set. He's been terrific at possessing the ball in traffic, recognizing and turning deftly away from pressure, playing simple passes and understanding how to advance the ball forward, but that's only part of the equation.

"When Sammy got here, he was immature - 'everything's gotta be to my feet, I'm not allowed to get hit,'" Howlett explained. "After the first year, the growth in Sammy has been tremendous. He is, day in and day out, very consistent at a high level - the guy has great vision, great touch, great engine. 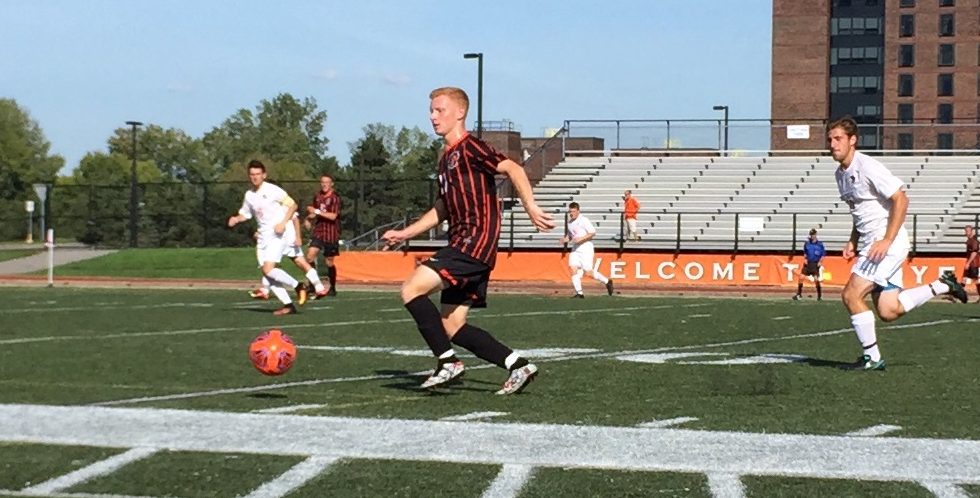 The need to change in order to deserve more responsibility wasn't lost on Wasson, either.

"I've [had] to take it more seriously and be a role model for everyone - because we know we have the talent to win this year, and if we have the right leadership and the right mentality, I think we can go really far this year."

5) Camaraderie in tact: Despite struggling with lingering hamstring issues all summer and then suffering the broken toes, Pavone is still one of the loudest supporters on the Bengals' bench. Bucky Benyehuda (No. 8), a regular in 2015 resigned to a reserve role this year, is still the first to holler after a goal or shout out a nickname.

Maybe it's just the proximity of the bench to the stands at Coyer Field, but Howlett's reserves are almost constantly encouraging, seemingly a part of the match without being on the pitch. It's a sign that the Bengals have bought-in to the program. 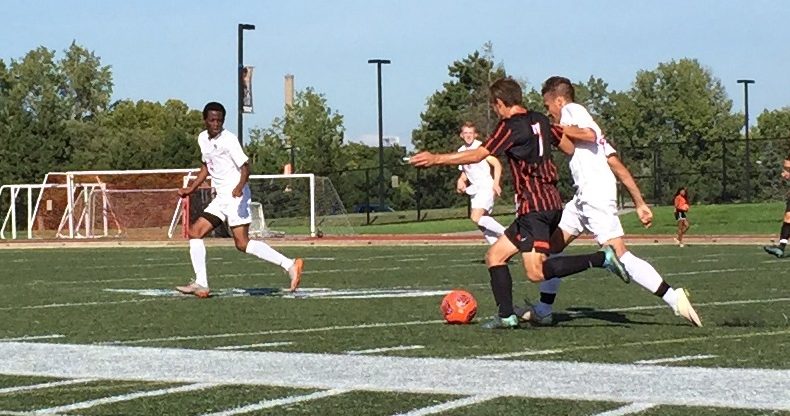 Who's gone: Left back Barry Hunt was the lone senior on last year's roster; Pavone is injured; and Lorne Maxime, Pat Eadie and Paul Malinowski are no longer with the program.

Who's new: Forward Brandon Galanti (No. 19) transferred in from Niagara University, while Erie Community College star center back Drew Braun (No. 2) chose Buffalo State for his final two years of eligibility. 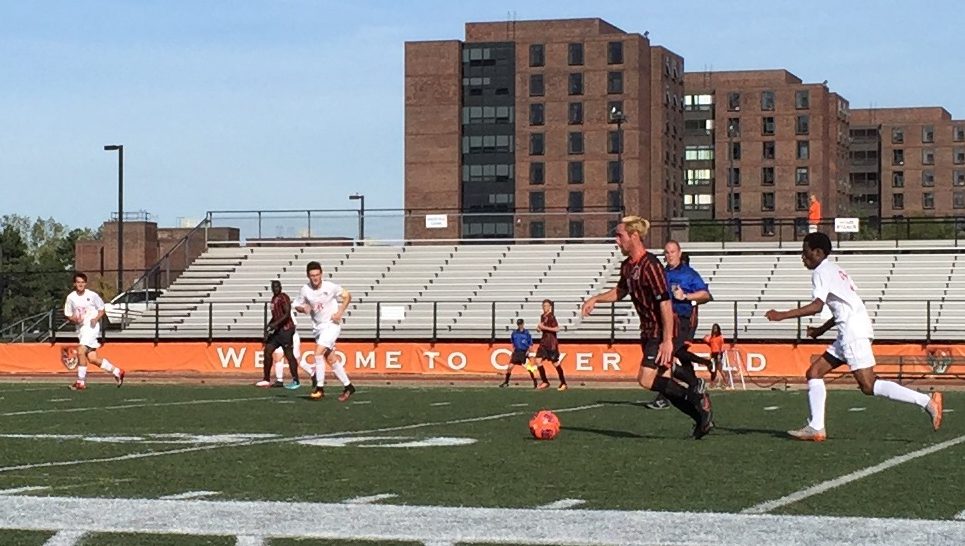 Top players: We've already mentioned Myers and Wasson's contributions offensively, while Braun and seniors Banahene and Robert Aguilar-Lobo (No. 4) all bring quality on defense. Six-foot-two attacking midfielder Bass Sarr (No. 14, pronounced BAHsss), though, could develop into the best of the bunch.

"[Bass] brings such a different element," Howlett explained. "His elbows are in people's faces to begin with, not because he's putting them there [intentionally] - it's because it's what he is.

"He's so tough to defend - He can play in the air, he can play on the ground, he doesn't mind the tackle, he can put his foot in - he's got a lot of pieces of the game that make him a complete player." 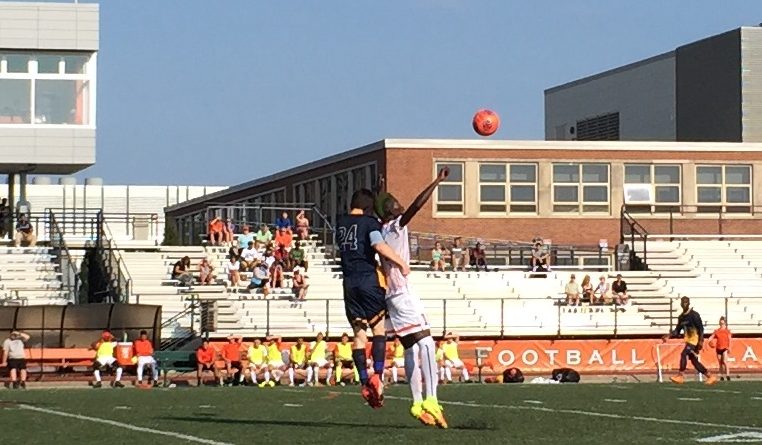 Breakout player: Redshirt freshman Victor Powell (No. 12) earned a starting role in non-conference play as a holding midfielder after nearly working his way into the lineup late last season. Another Clarence HS graduate, Powell is good on the ball, switches play well and keeps possession.

Although Braun, a versatile back who's sound positionally and rarely loses a one-vs.-one battle, is known to many in the Buffalo soccer community from his Iroquois High School, ECC and BDSL exploits, he's brand-new to the SUNYAC and could become one of the conference's best defenders as he acclimates. 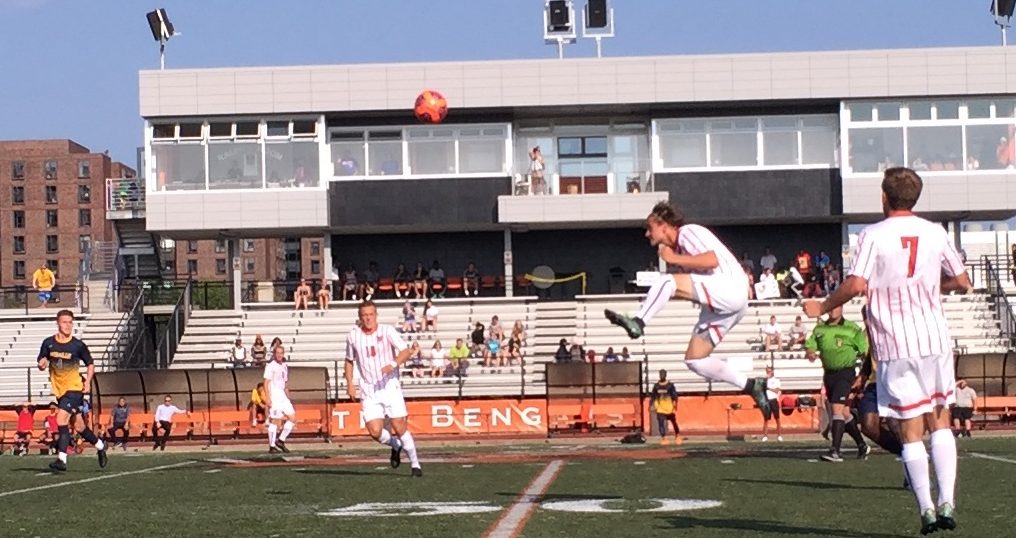 Unheralded contributor: A striker last season, Black has embraced a new role at outside back, where his pace is advantageous in getting forward while still being able to recover.

The nuances of the position will come with time, but the Canadian junior has been rewarded for his versatility. 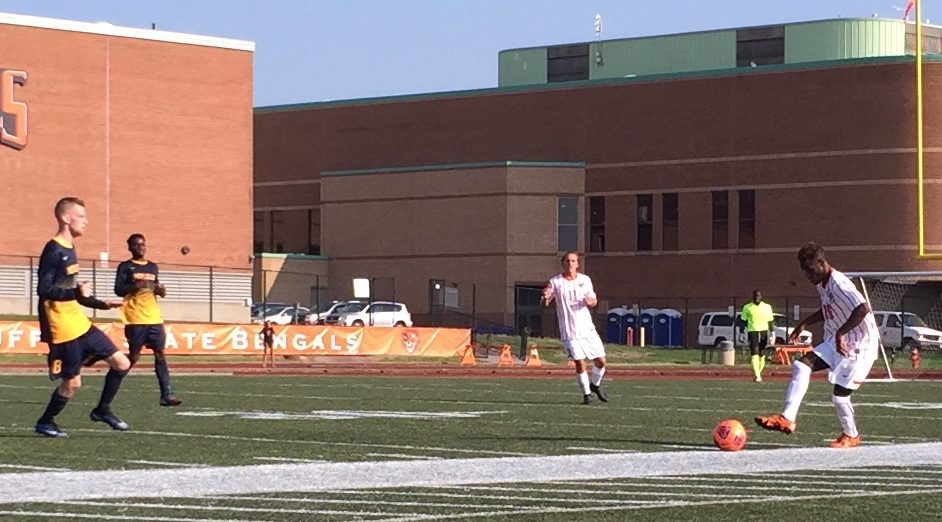 #PrepTalk alumni: Surprisingly, just six: Wasson and Powell from Clarence, Geegba from Riverside, Galanti from Frontier, Alex DiCarlo (No. 23) from Williamsville South and Braun from Iroquois.

BN Soccer likes: Johnson, but not for the dyed blonde hair and ponytail. The newcomer may be a bit ornery on the field, but he's willing and able to take defenders on, and might be the best striker of the ball on the team - whether it's a cross or a shot.

The Bengals might struggle if...: SUNYAC play will be a bear. Annual powerhouse Oneonta, upperclassman-laden Cortland, 7-1 Plattsburgh, upstart Fredonia (6-1-1) and undefeated New Paltz (4-0-4) will all be tough matches. It's a real gauntlet to finish in the top six of the 10-team conference.

Big matches ahead: The Lake Erie Derby at 1 p.m. Oct. 1 in Fredonia vs. the Blue Devils is a rivalry match extraordinaire, while Plattsburgh's trip to Coyer (3 p.m. Oct. 14) will likely be an important match for playoff position.

Email Ben Tsujimoto, who needs more hours in a day, at btsujimoto@buffnews.com