Of all the American customs I view with suspicion, waiting until the end of the meal to order dessert ranks high. Why risk filling up before you get to what you really want? Sure, I go along with it, trying to do what I can to blend in with the civilians.

But there are times when the risk is too high. “Please tell me about the pie,” I said to the server at the Village Inn, as she arrived with menus. “Tell me you still have the coconut cream.”

Family restaurants in out-of-the-way places need hungry neighbors to survive. Near the southeastern shore of Grand Island, Michael Carr’s restaurant has marked 28 years in business, so you know the locals are on board. His sister-in-law, Sarah Mallare, bakes the pies, other desserts and anchors the kitchen.

Most of my readers would need to cross a bridge and pay a toll to get there. If you’re hungry for straightforward, unfussy food served in abundance, it might be worth the trip. 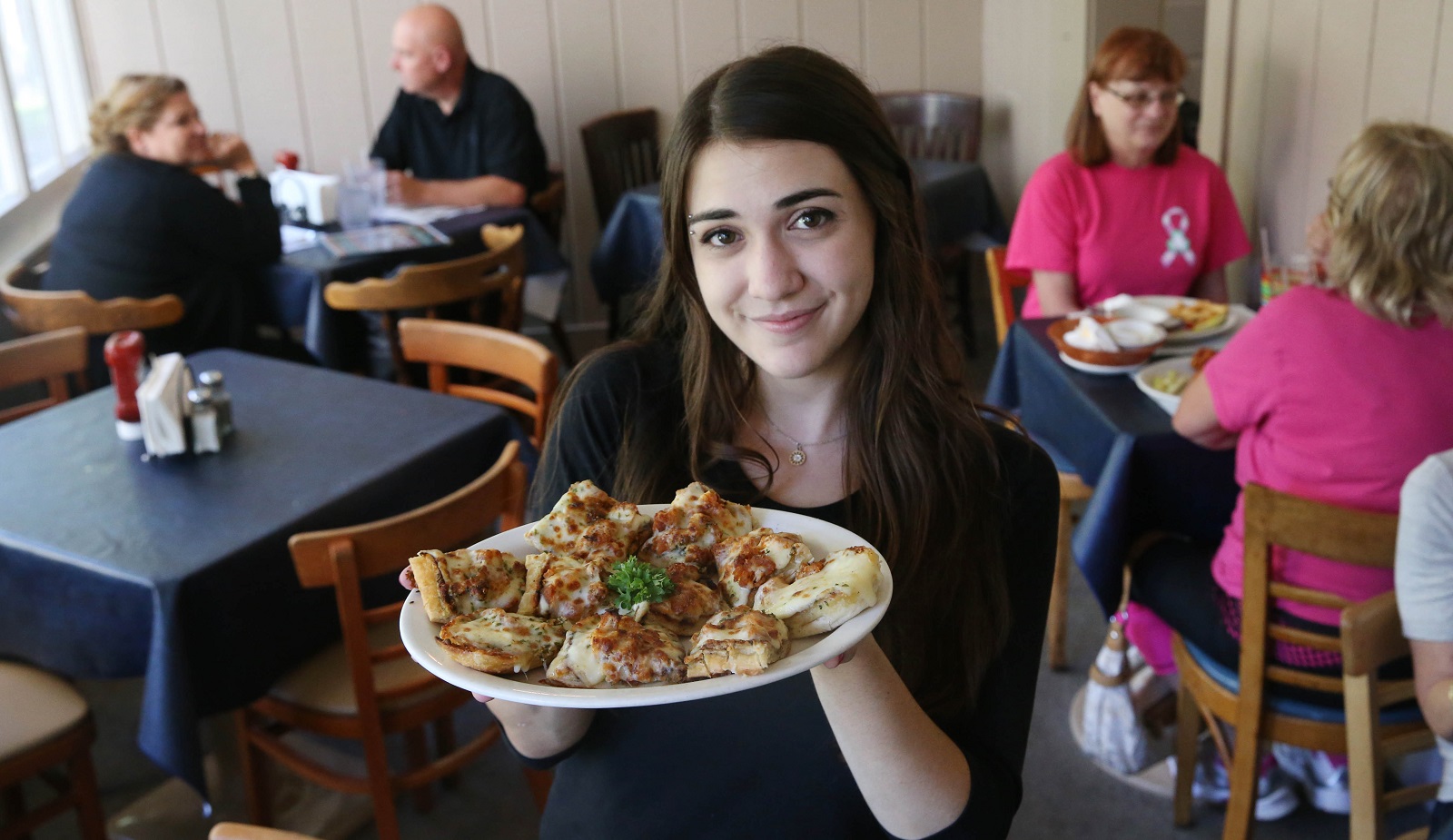 When I pulled up to the converted house, following leads provided by tipsters, I had pie on my mind. Hand-lettered operating hours and flowerboxes gave it the curbside appeal of Aunt Sally’s beach cottage. If Aunt Sally got to work, putting a pocket bar in the vestibule and turning the side sunroom into seating for 30, she’d have a place like the Village Inn. This is a place where servers are alerted to ready plates by a dining room bell tied to a string that runs through a hole in the wall to the kitchen.

On a shelf in the barroom, I spied the dessert board: Toll House pie, banana bread pudding, peanut butter pie, coconut cream pie. Our server, after checking with the kitchen, reserved the last slice of coconut cream. 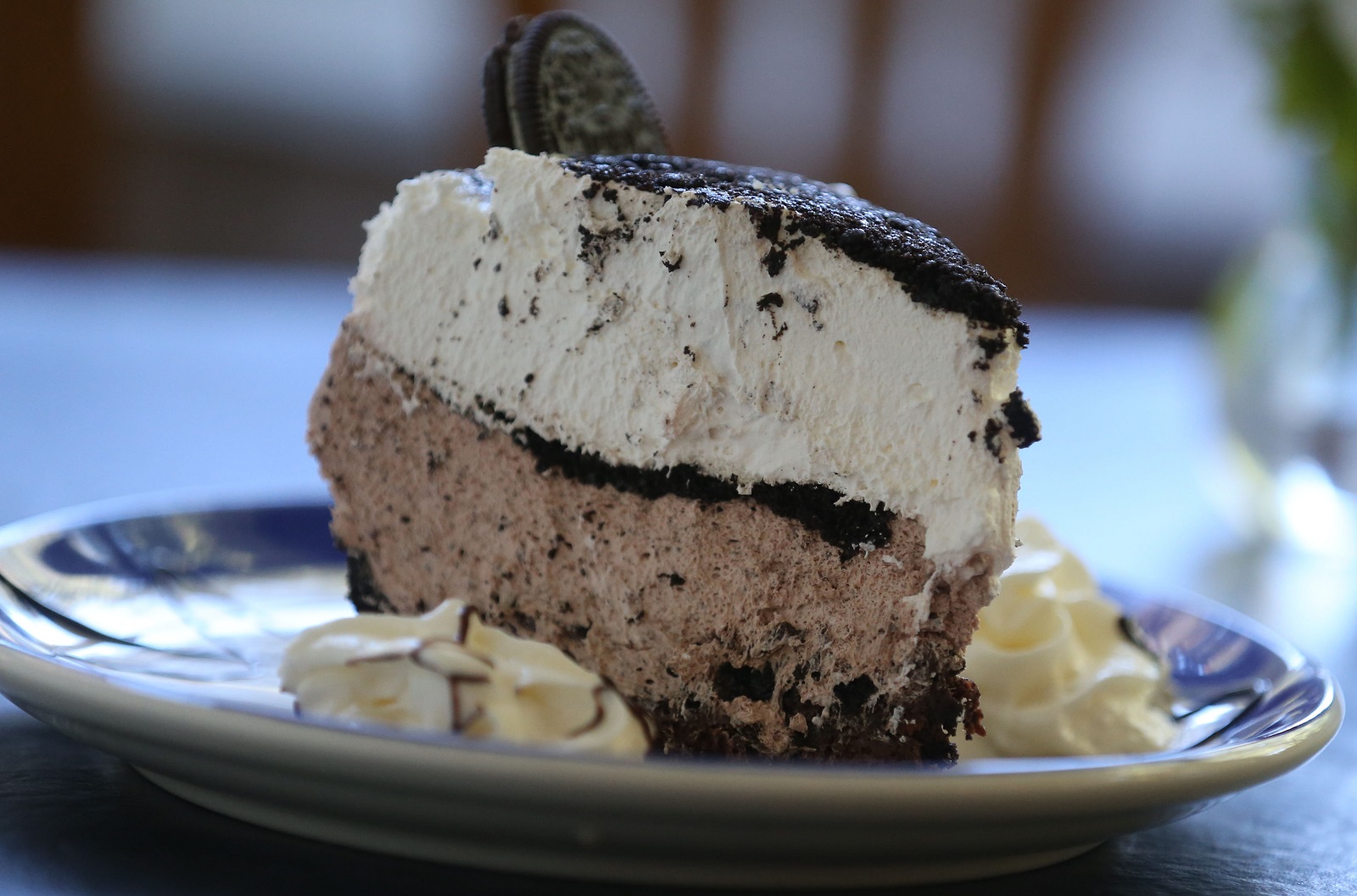 Sanguine that I knew how the meal would end, I looked for starters. Always game to try original takes on the Buffalo wing, I asked for a single ($9.99) Mike’s style. Crisp wings arrived with the regulation celery, carrot sticks and blue cheese dressing. Spicier than barbecue wings, smokier than standard Frank’s-based sauce and a little bit sweet, they were a worthy departure from the norm.

There’s Buffalo bread ($8.49) too, the restaurant’s elaboration on cheese-quilted garlic bread. These were dressed with chunks of medium chicken fingers and blue cheese, and chopped into bite-sized segments. The hearty appetizer could have used another minute under the broiler for some golden bubbles.

Soups are served with pride. The chicken Dutches made a good impression with chicken, carrots, peas and corn in a creamy broth that was like thinner chicken pot pie filling. The lobster chowder was full of potato and corn in a broth that tasted generically seafoodish rather than reminding me of lobster. 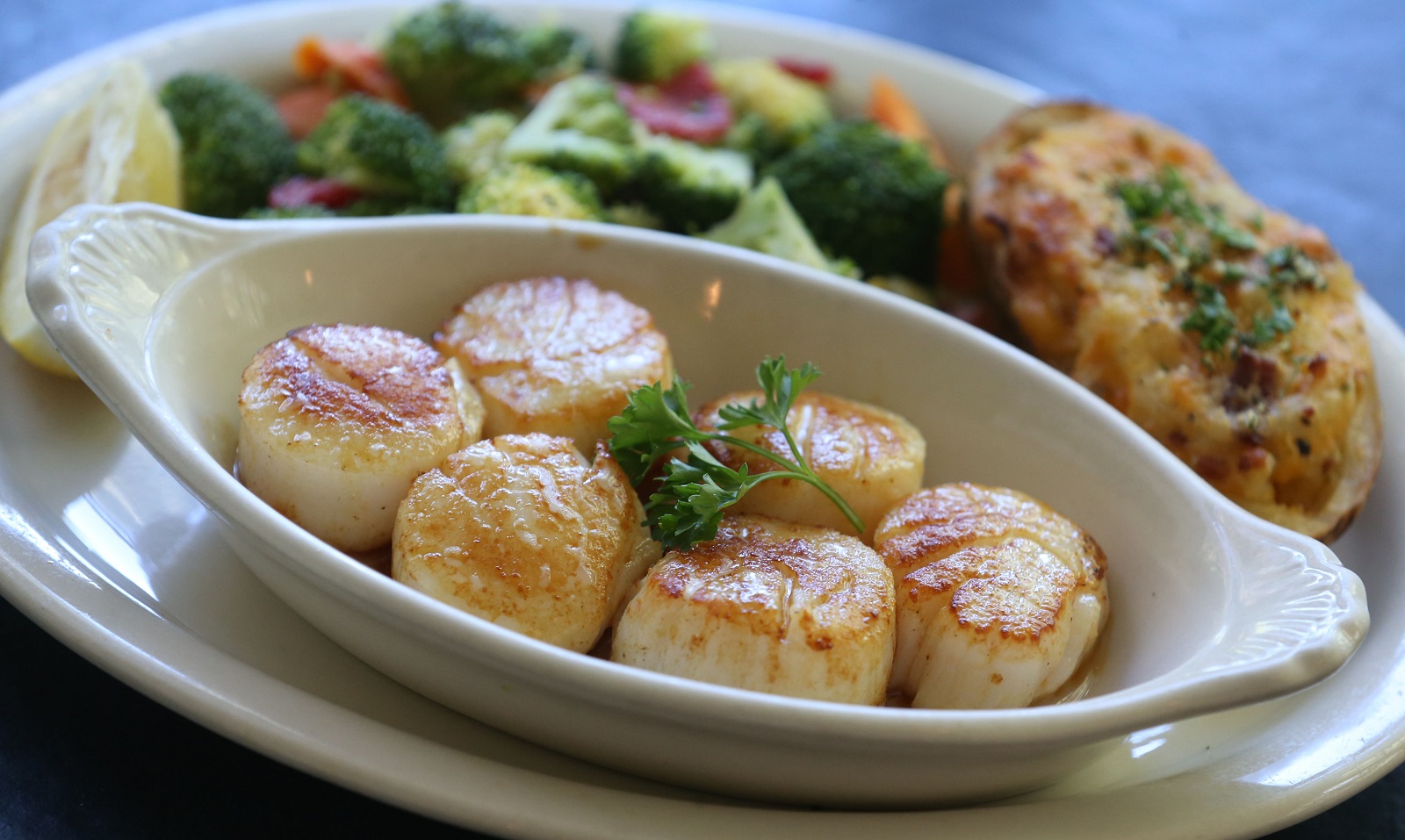 The Village Inn's scallop dinner is made with jumbo day scallops sautéed in butter and garlic, served with vegetable or creamy cole slaw and choice of potato. (Sharon Cantillon/Buffalo News)

Entrees were American standards, dishes that have been around forever. They come with soup or salad. I asked for chicken and biscuits ($16.99), a rare old-timey offering.

What arrived was a big bowl of creamy chicken sauce dotted with peas, carrots and shreds of chicken. It had been ladled over a big buttermilk biscuit, which maintained its integrity instead of sogging under the gravy. The flavor was real chicken, not base.

If it had a few chunks of chicken instead of shreds, and another biscuit to help cope with all that sauce, I would have been fully satisfied. 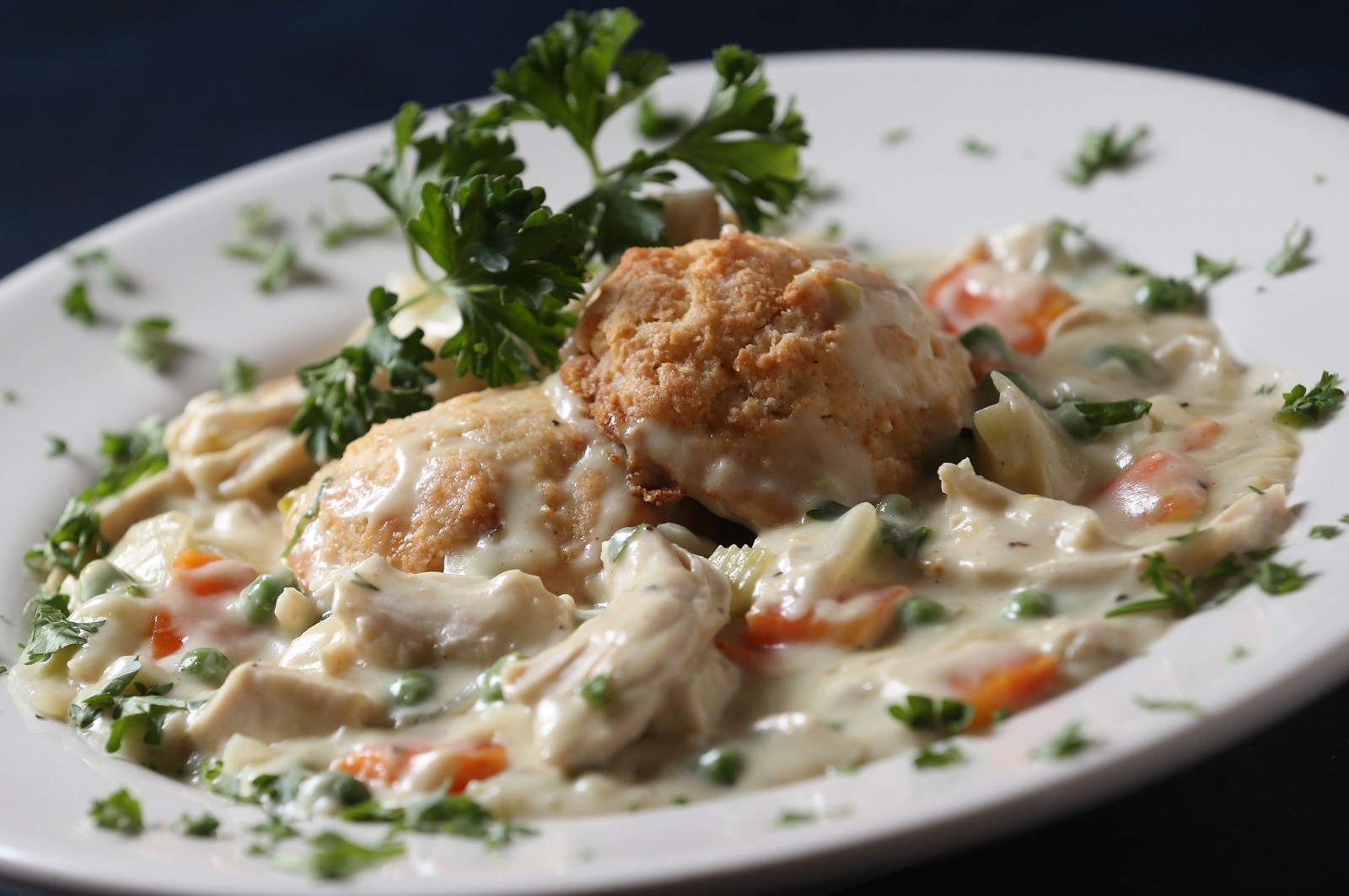 A petite hunk of crusty beef, cooked to the right medium-rare, starred in the steak salad ($12.99). Cucumber, sliced hardboiled egg and shredded cheddar were along for the ride, a fresh assemblage brought down by regrettable croutons from a bag. English-style fish and chips ($14.99) was a good rendition, a flaky, crackly crusted haddock fillet, with not-too-sweet coleslaw speckled with celery seed.

An open-faced prime rib sandwich on garlic bread ($17.99) was solid too. It arrived with crispy sweet potato fries ($1.99 upcharge) and a cup of fresh tomato salad. The well-seasoned cut of beef, topped with melty blue cheese, still had a bit of pink. 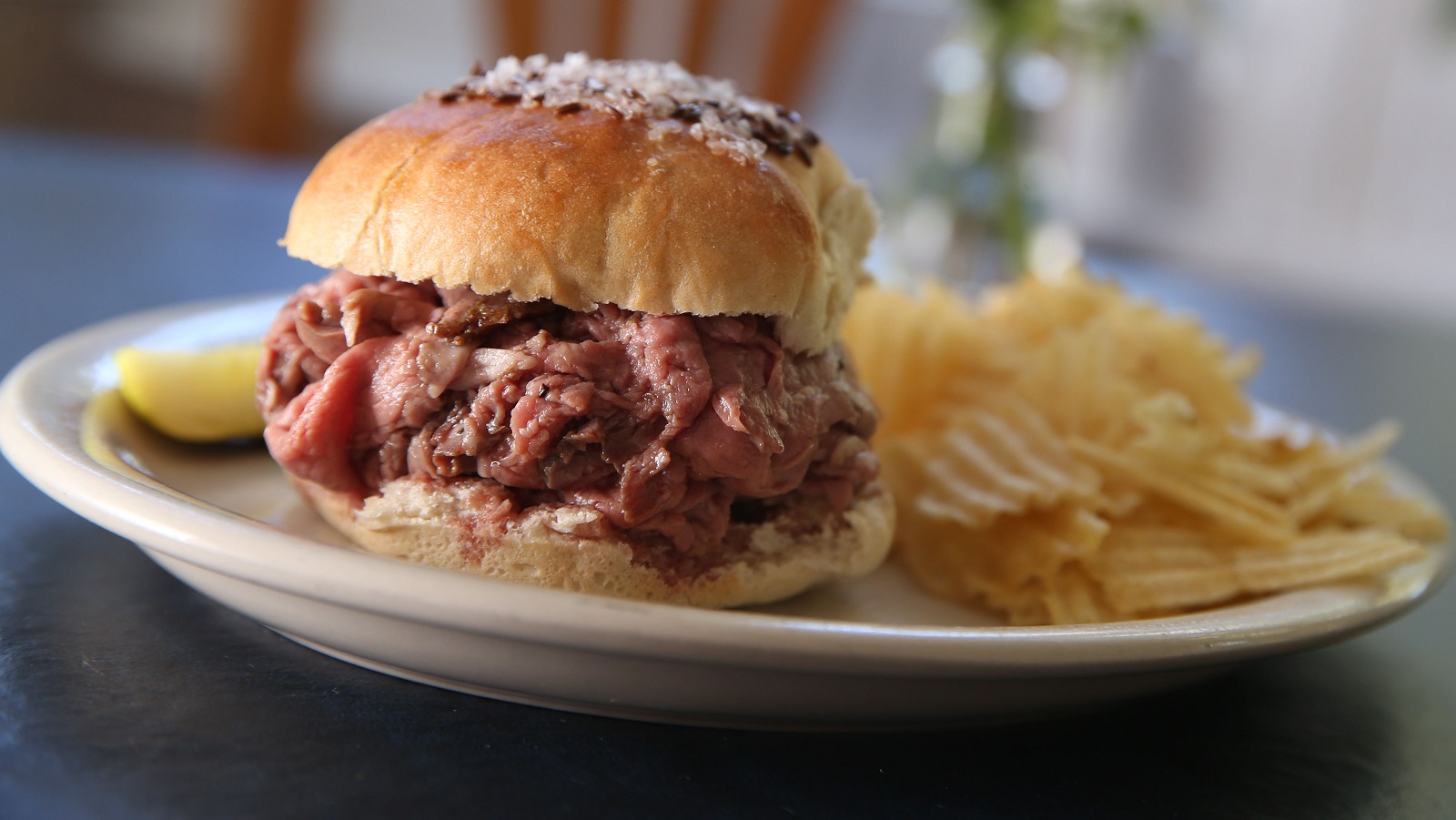 Soon enough, it was time for pie ($5.99). The coconut cream’s flaky crust and eggy custard, laced with more coconut and topped with a shower of coconut and whipped cream, was good old-fashioned fun. A peanut butter pie, with Oreo crust and salty peanut filling, successfully answered the question: “What would a slice of a platter-sized Reese’s Cup taste like?”

Banana bread pudding wasn’t as keen, having gotten gluey with moisture. Toll House pie ($5.50) was essentially a wedge of a big chocolate-chip cookie still warm from the oven.

As we ate, people kept coming in and plopping down into chairs like they lived there. The room could use some work; the kitchen door slamming jarred me the first few times.

But the Village Inn is a place where the food brings customers back, not the décor. If you’re going over to Aunt Sally’s for dinner, you know you’re due a comforting meal, even if the couch needs a new slipcover. 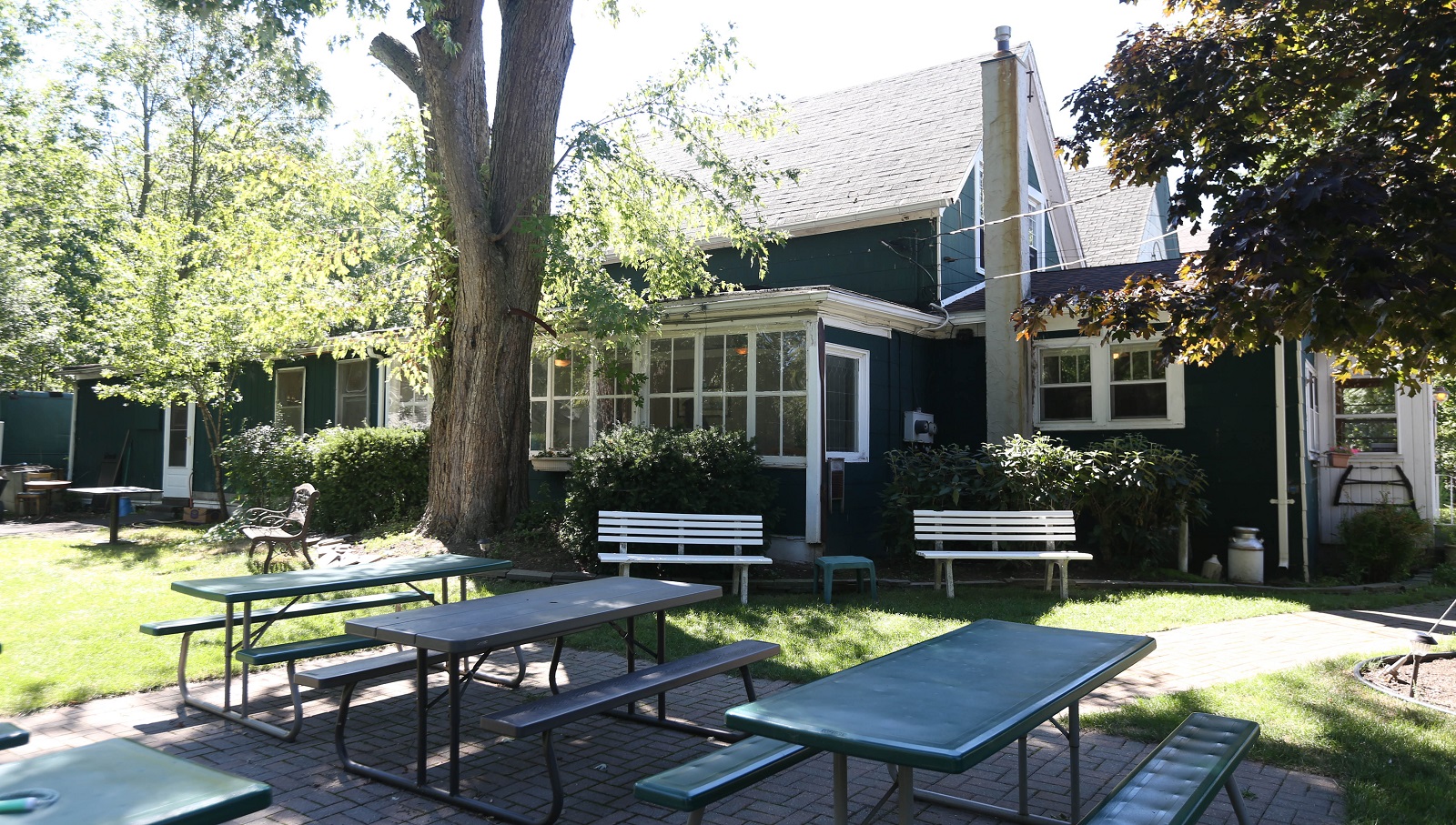 The Village Inn is at 1488 Ferry Road on Grand Island. (Sharon Cantillon/Buffalo News)