After a 2-16-1 season in 2015 - Oduro's first at the helm - signs on the surface suggested that the Bonnies could go nowhere but up. Statistically, St. Bonaventure was at rock bottom, ranking 203rd out of 206 NCAA Division I teams in RPI.

What the former Canisius College assistant did achieve during that arduous, painful season was the buy-in of his players - something the previous coach had irretrievably lost - and an acceptance of his long-term plan even though wins did not come immediately. For instance, the Bonnies only lost four non-seniors from a historically bad team. Sixteen returned.

"I absolutely think there's been an improvement [from last year to now]," Oduro said after the Bonnies lost to Canisius, 1-0, on Sept. 16. "For once, I think having our kids disciplined, respectful and competing hard every time they step on the field is an excellent trait - we've got to keep that going." 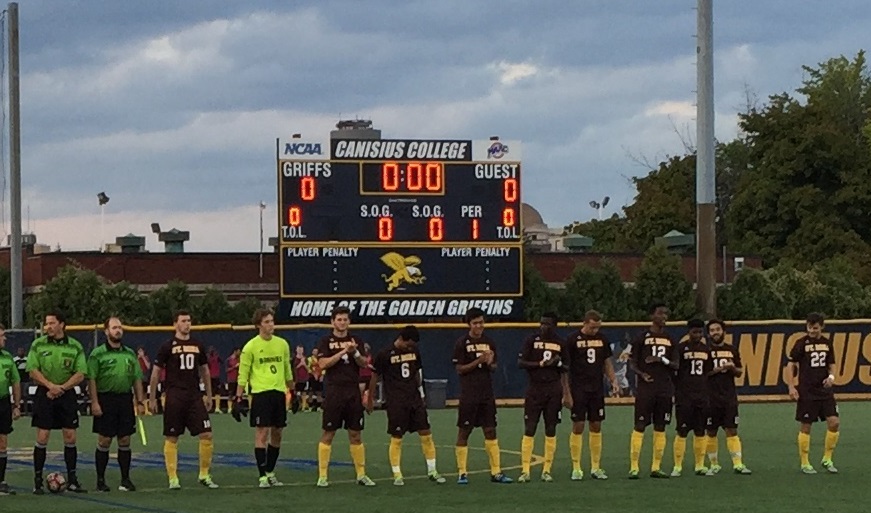 "You can see how far we've come from my freshman year," echoed captain Kieran Toland, who played for FC Buffalo this summer. "Under Kwame the program keeps progressing and progressing - it's now a matter of starting to win games.

"We get so close in each and every game but then it looks bad because we keep losing, but once we start winning games then it's going to change everything."

St. Bonaventure (1-5-1) did capture its first win of the season, over Big 4 rival Niagara, on Sunday. Freshman forward Jacob Dyck latched on to a long ball in behind by Noel Orozco for a first-half goal, and Alex Olday, a red-shirt freshman making his second start in net, kept the clean sheet with one save.

Olday, a product of the Empire Revolution Development Academy and a graduate of Frontier High School, made his first start against Canisius in a high-stakes Big 4 game away from home just two days prior, taking the reins from sophomore Luke Iacobellis.

Although he had some nervy moments in the early going, Olday acquitted himself well, stopping six shots - including a diving save point-blank on Mathew Santos and a reaction stop on Melvin Blair's breakaway.

"I think he did very well," Oduro said following the match. "That's the best way to grow up - you're put in situations where you have to grow up quickly. Look at Arsene Wenger of Arsenal - he puts his youngest players in the biggest games - that's how you grow up."

Scoring will continue to be a challenge for St. Bonaventure; the Bonnies failed to score more than one goal in a game from Aug. 28 to Oct. 22 last year - a span of 14 games - and have only scored more than one goal once this year, in a 4-2 loss to High Point. The absence of Kosi Nwafornso, due to injury, hasn't helped matters. 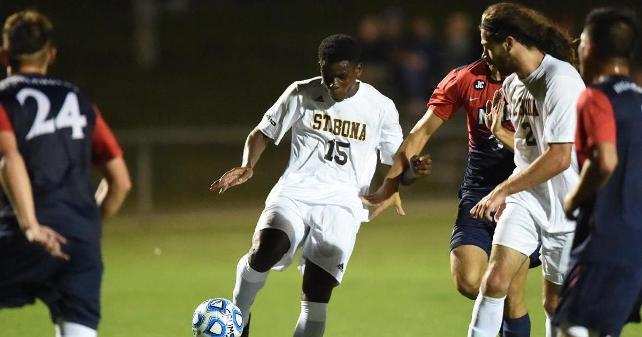 Kosi Nwafornso, No. 15, has missed time due to injury this year. (via St. Bonaventure Athletics)

"I think when we get in the final third, we have to do better of getting our shots on target, creating more attacking chances," Oduro explained. "We're still unsure what to do when we get to the attacking third, so we have to improve on that."

Wins will be hard to come by again this year - the Atlantic 10 is an unforgiving conference - but at least there's fight in this Bonnies team, plus some hope for the future.

"I still love [playing here]," Toland reflected after the loss to Canisius. "It's trying to always see the positives through things. Some bad results, some good results - you just have to keep being positive and looking forward."

Who's gone: Starters Jimmy Barrios, Bobby Diaz and Mitchell Skrabacz graduated, as did reserve Breno Calegari. Starting defender Jaskamal Singh is no longer with the program.

Top players: Toland won't beat you with pace, but he's very strong technically, a terrific striker of the ball and has upped his work rate since 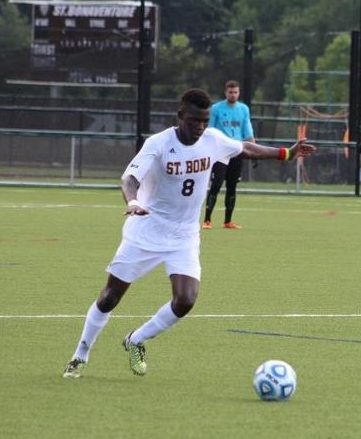 The addition of Paul Afful is reason for Bonnies fans to be excited. (via St. Bonaventure Athletics)

his underclassman years. His role is a little bit deeper than last year - he's essentially a No. 6 now with some freedom to get forward.

Last year's leading scorer Nwafornso has been saddled with injuries so far this fall. When he's healthy - which should be soon - expect him to slot in as a winger, giving the Bonnies greater width and another scoring threat in the midfield.

Breakout potential: The coaching staff is high on junior transfer Afful, who moves effortlessly and covers a ton of ground. There's some Yaya Toure to his game.

While he doesn't seem quite in sync with the American college game yet, he'll certainly improve as the season progresses.

Add Olday to the list of players who can help shape this program over the next four seasons.

Unheralded contributor: It's probably not ideal for 5'8 Anthony Sileo to be playing center back - not his natural position - but he's stood in next to senior Matthew Lane and fought diligently against much bigger players.

The sophomore is smart enough to break up plays and generally makes good decisions with the ball.

St. Bonaventure center back Anthony Sileo, middle, returned to the program for another year. (Don Nieman/Special to The News)

BN Soccer likes: Nwafornso can be fun to watch and Dyck has a nice motor up front, but midfielder Noel Orozco is one of two seniors in the starting lineup, he's more inventive than he's given credit for, and he played a major role in the Bonnies' first win of the season by assisting on Dyck's goal against Niagara. 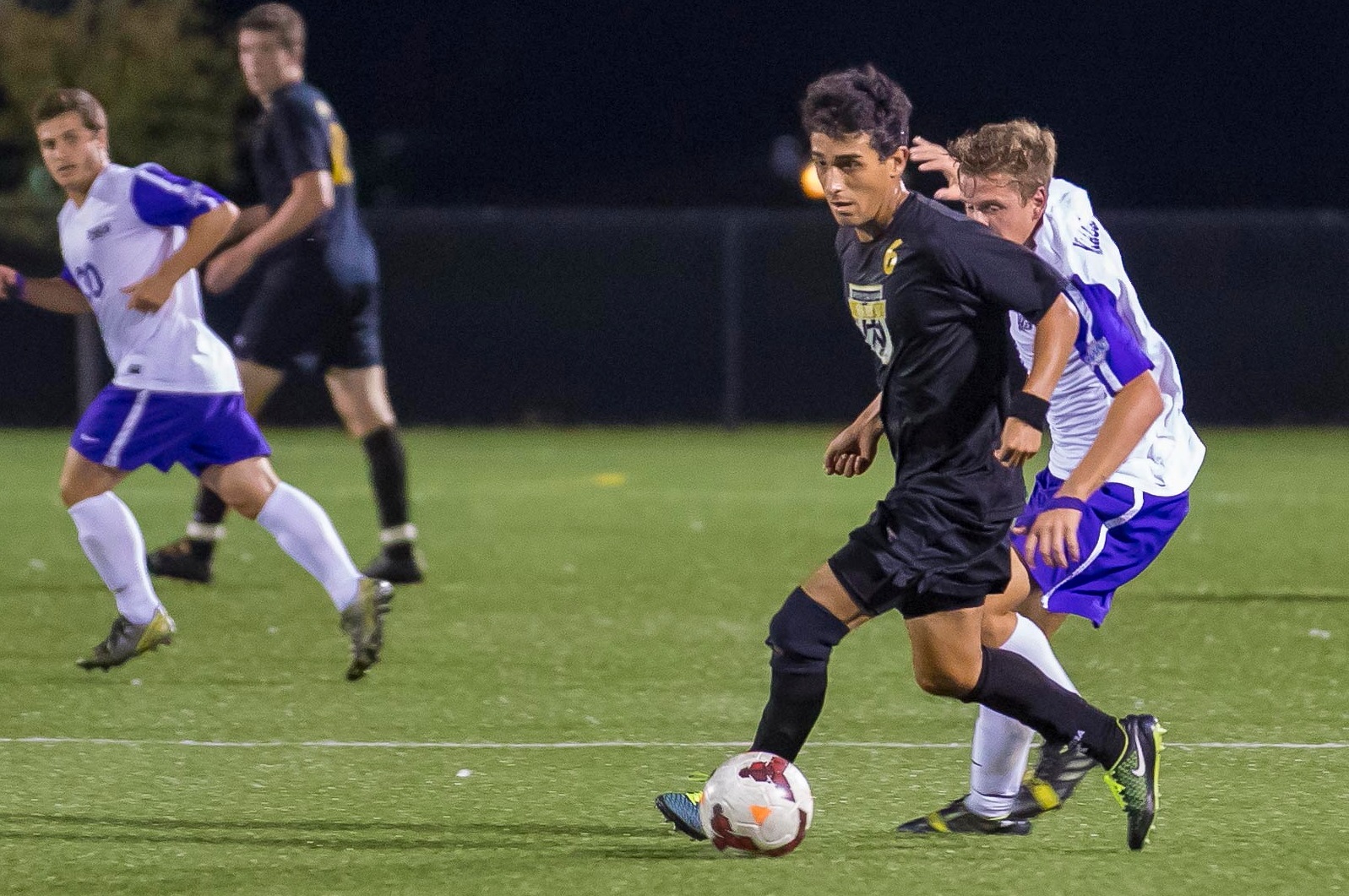 St. Bonaventure's Noel Orozco, No. 6 in brown, is versatile in the midfield. (Don Nieman/Special to The News)

St. Bonaventure will struggle if...: Just like the Bonnies women, the men will struggle in Atlantic 10 conference play, where they were chosen last in the preseason poll by a wide margin. Four wins overall and two in conference would be progress for a program that needs to keep finding small victories.

Big matches ahead: The 7 p.m. Sept. 21 match against the University at Buffalo provides the Bonnies a chance to unexpectedly pilfer the Big 4 Shield, while St. Bonaventure could make a strong statement opening A-10 play with a home win over St. Joseph's, picked to finish only two places ahead of SBU.

Dayton's trip to Olean on Oct. 15 is the highest-rated conference foe to come to town.

Email Ben Tsujimoto, who has a hunch that Oduro is an Arsenal supporter, at btsujimoto@buffnews.com