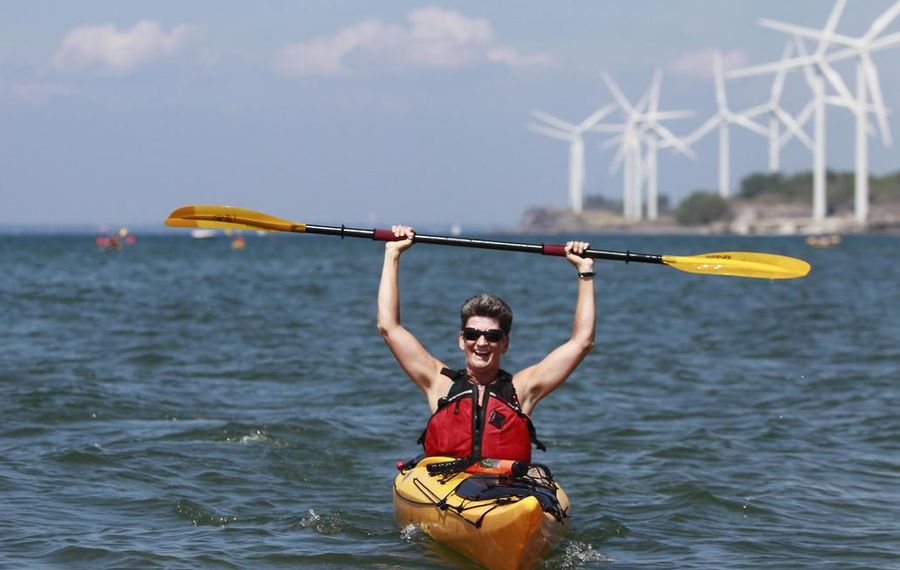 The Great Lakes Restoration Initiative (GLRI) has brought tens of millions of dollars in environmental research, clean-up and rehabilitation across the Buffalo Niagara region since 2010.

The program jump-started what the Buffalo Niagara Riverkeeper fondly calls our "blue economy."

It's helped return the ancient lake sturgeon to area waterways. The bald eagle to its skies. And economic development to the shoreline.

Quietly funded by President Obama's pen to the tune of nearly a half-billion federal dollars in late 2009, the program's genesis was born from a 2004 executive order by then-President George W. Bush that declared the Great Lakes "a national treasure."

The federal initiative has revitalized Buffalo, numerous other spots around Western New York and in other places such as Erie, Pa.; Cleveland; and Milwaukee, through collaborative partnerships involving local and state agencies, environmental organizations and private industry.

Some say the Great Lakes Restoration Initiative may well be the most successful bipartisan legislation to come out of Washington, D.C., this century.

Rep. Brian Higgins said divisions in Congress often fall along ideological or geographical lines. And this one is no exception.

But the Great Lakes have brought Republicans and Democrats together in a unique regional coalition, from Minnesota to New York.

"That gives us leverage that you're not going to have in Congress and good bipartisan work," Higgins said.

Here's a look at 10 big environmental accomplishments in the Buffalo Niagara region so far this decade that we can attribute to the Great Lakes Restoration Initiative. 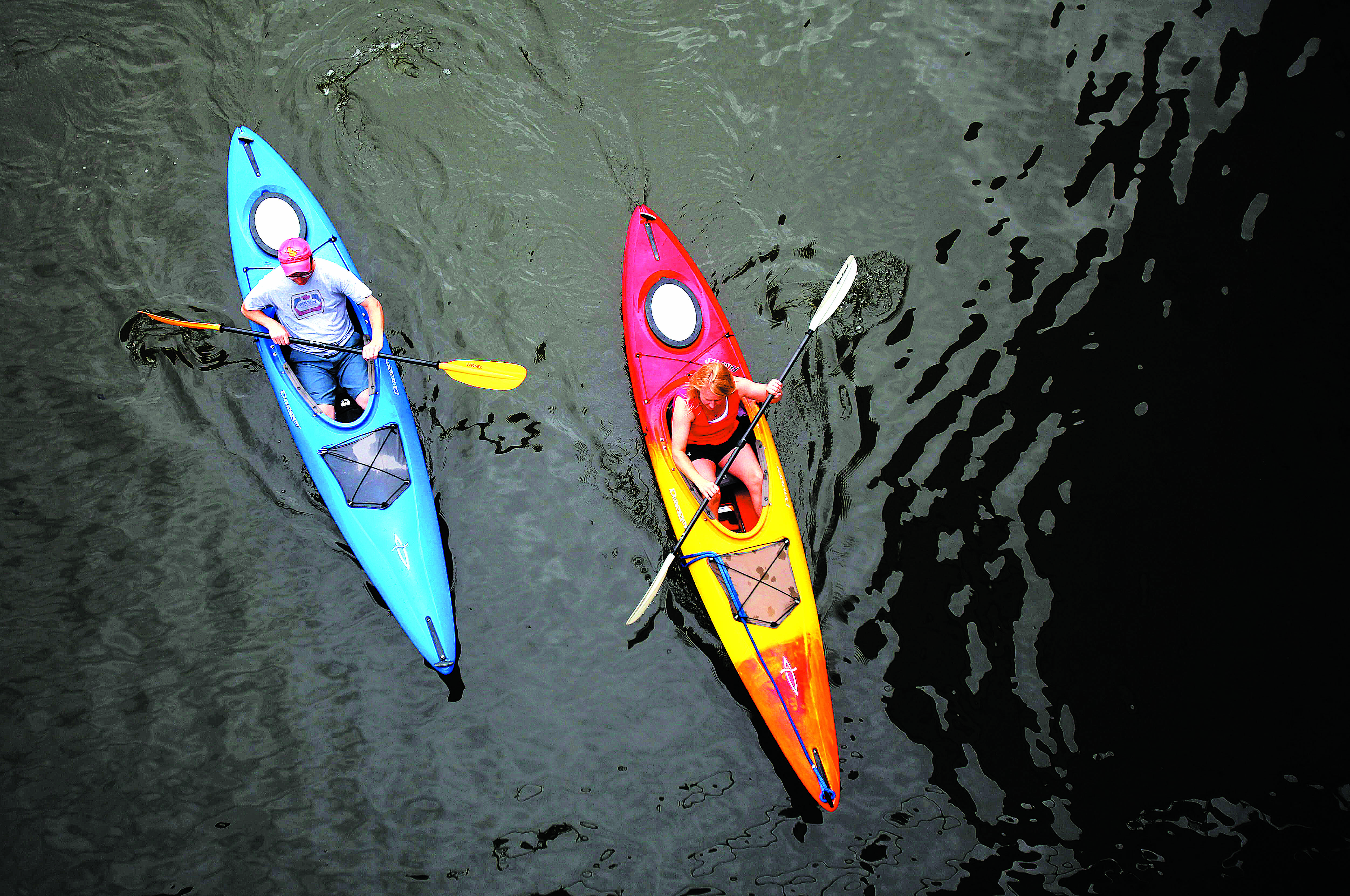 Toxins from a century of its industrial past were removed from the Buffalo River during a six-mile cleanup. Now, work to restore habitats for birds, bees and Buffalo residents is underway.

2. The Emerald Shiner's keystone role in the Niagara River ecosystem is preserved.

University at Buffalo doctoral students study minnows swimming against a controlled water current mimicking the velocity of the Niagara River in an engineered hydraulic flume in May. (Robert Kirkham/Buffalo News)

The health of the tiny Emerald Shiner is vital to other fish and bird species. Providing more habitat and better water quality to boost its vitality will play a key role in restoration efforts of other species in the Niagara River corridor. 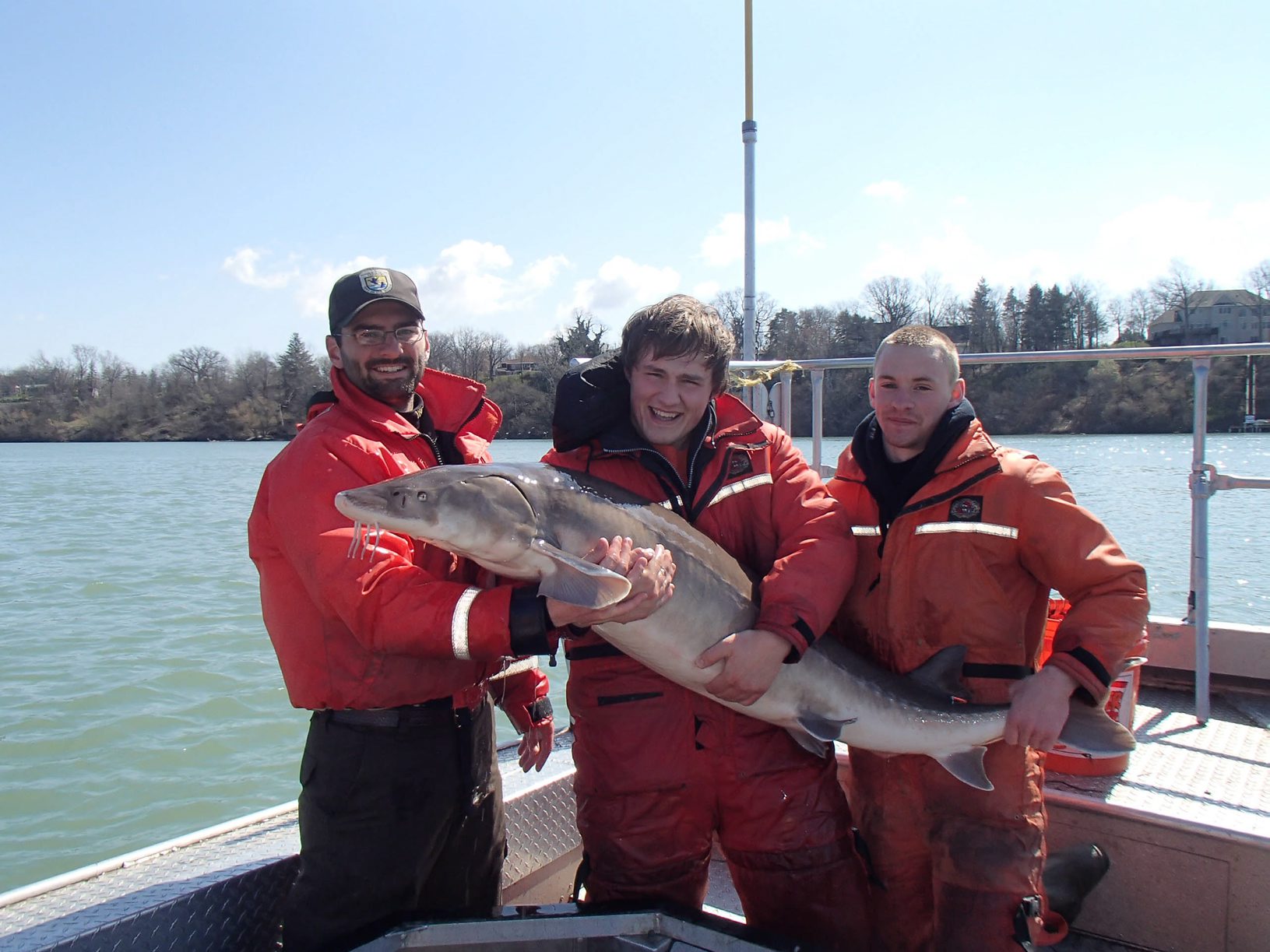 The lake sturgeon swam in ancient waters at the same time T-Rex was king of the Earth. Overfishing and pollution ruined the sturgeon's numbers in the 20th century, but evidence shows they're on their way back in the Niagara River and the Great Lakes.

4. Stella Niagara's nature on the banks of the lower Niagara River is preserved.

Maintaining green space provides habitat and a place to breathe for area residents and critters along the lower Niagara River. At Stella, there will be no development on 29 acres of riverfront property thanks to efforts of the Western New York Land Conservancy.

Kierstin Thompson, 5, left, of Buffalo, covers her sister Lily Ann, 7, with sand as they play next to a warning sign. The two Buffalo children decided to make the best of things after discovering the water portion of said beach was closed due to high levels of bacteria on June 24, 2014. (Robert Kirkham/Buffalo News)

The beach is the place to be in the summertime, but when it rains, beaches are often closed because local sewage treatment plants overflow nearby. Fixing those problems is the long-term solution but studying when and why to close beaches is an interim step to protect public health while maximizing recreational enjoyment.

6. Times Beach emerges as a bountiful habitat for wildlife and pollinators.

Paul Fuhrmann, left, Kris Ericson, center, both of Ecology and Environment, Inc. and Craig Forgette, right, of the U.S. Army Corps of Engineers check on the plants they have panted at Times Beach Nature Preserve in Buffalo, June 19, 2015. (Mark Mulville/Buffalo News)

Times Beach was once the place where hazardous materials went from dredging the contaminated Buffalo River's navigational channel. Now, that site was capped and rehabilitated. It's used as a place to help migrating birds, lure and promote pollinators and a quiet natural respite from the busy environs of Canalside just across the Buffalo River.

7. The Scoby Dam is being lowered to reunite fish species in Cattaraugus Creek. 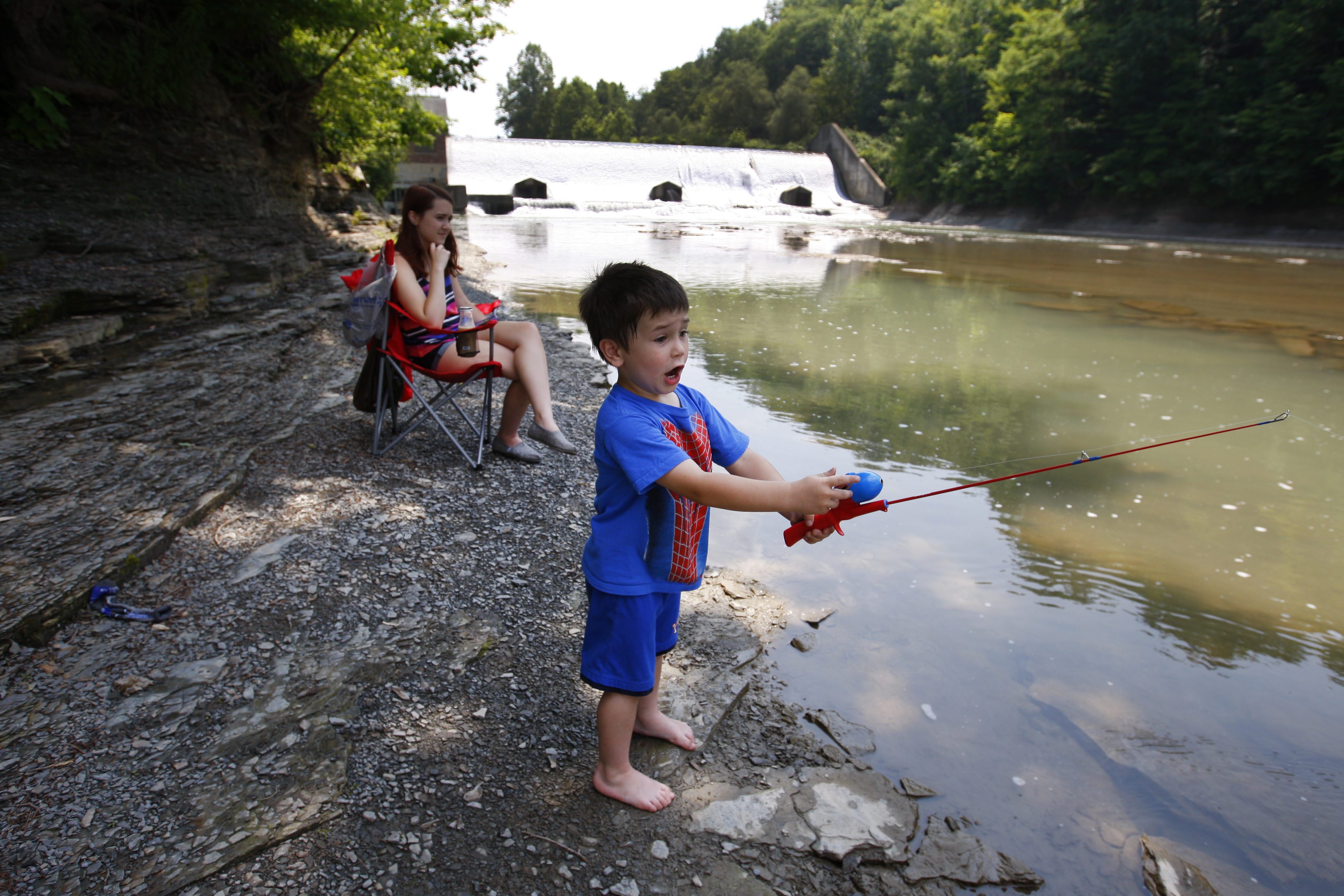 Hunter Bieler enjoys a day of fishing with his sister Caylee Barger at the Scoby Dam in Springville Tuesday, July 22, 2014. (Mark Mulville/Buffalo News)

The 38-foot-high Scoby Dam near Springville has blocked tens of thousands of steelhead trout from swimming further up Cattaraugus Creek to spawn in the upper part of the creek. A plan by the U.S. Corps of Engineers through GLRI would lower the dam to allow fish passage between the upper and lower parts of the creek, while at the same time capturing invasive sea lamprey. Corps engineers are preparing final designs for the project now.

8. Scajaquada Creek's days as an open sewer are numbered.

Riverkeeper Deputy Executive Director Kerrie Gallo and Army Corps of Engineers Project Manager Bryan Hinterberger discuss plans in May 2016 to dredge a portion of Scajaquada Creek in Forest Lawn Cemetery where a new wetland habitat area will be installed as part of a measure to control the volume and quality of water. (Derek Gee/Buffalo News)

Remediating Scajaquada Creek won't be done overnight, and a single magic bullet won't solve its problems. But Buffalo Niagara Riverkeeper has the waterway in its sights and is working with local, state and federal agencies, along with Forest Lawn and the Buffalo Olmsted Parks Conservancy to ensure the remediation happens as soon as possible. Some of the key initiatives include green infrastructure projects in coordination with the Buffalo Sewer Authority to reduce overflows from the city into the creek, improvements to the sewer system upstream in Cheektowaga, streambed and channel restoration work in Forest Lawn  and a new wetland habitat just northeast of the Delaware Avenue S-Curves.

Restoring what was lost on the northern tip of Unity Island (formerly Squaw Island) is the goal of this U.S. Army Corps of Engineers project. A deep pond at the site, which has proved to be an attractive nuisance for years, would be built up using clean sediment from the dredging of a revitalized Buffalo River to build a shallow wetland habitat for aquatic species and reconnect the area to the nearby Niagara River. 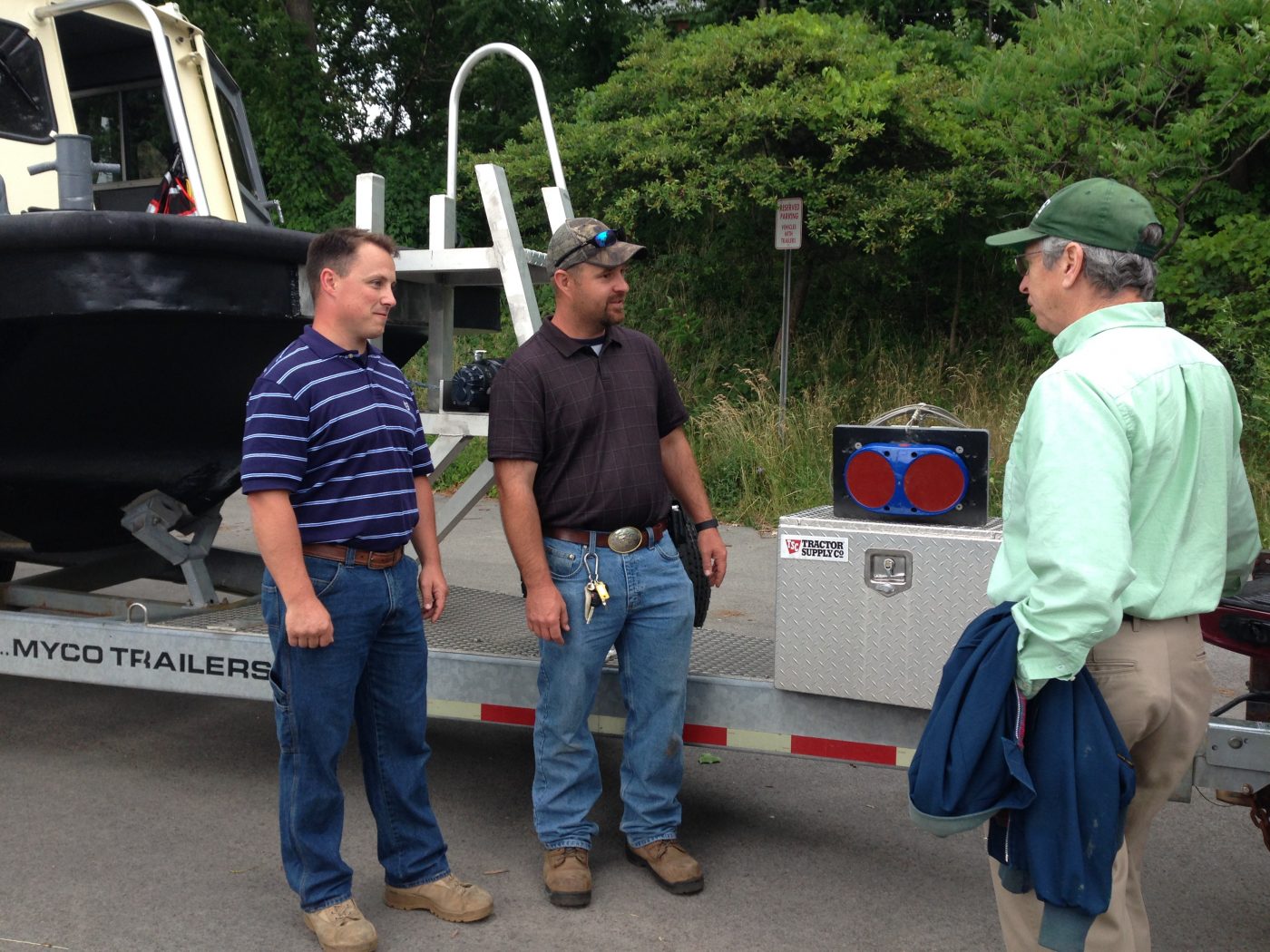 Matthew A. McClerren, a hydraulic engineer for the Army Corps of Engineers, Detroit District, shows off a sonar device to William F. Coon, a U.S. Geological Survey hydrologist, in July in the lower Niagara River near Fort Niagara. (T.J. Pignataro/Buffalo News)

Federal agencies are collaborating to go high-tech in the battle against harmful algal blooms in Lake Ontario. Gauges and sonar will be used to calculate the amount of phosphorus traveling downstream from the Niagara River into Lake Ontario to assist scientists in making future recommendations about appropriate nutrient targets in the waterways.