A restaurateur returns from Italy with dreams of reproducing the trip’s most memorable meals. It’s a restaurant cliché old as candle-corked Chianti bottles.

Yet Frankie Primo’s +39, inspired by Jay Manno’s tour of Rome and the Amalfi Coast, does more than avoid cliché. It provides a zone of respite and rejuvenation in a sheltered nook off of one of Buffalo’s most raucous streets.

The inside dining room, done in black and cream with a wood floor, is handsome enough. But oh, that patio. Big pots of basil, an awning over the bar where negroni-sippers can shelter from the sun and while away an afternoon, Italian Pandora on the sound system.

When dishes from Chef Greg Pecora’s meatball-free menu started arriving, the lesson was clear: Summertime on the patio is primo Primo’s. 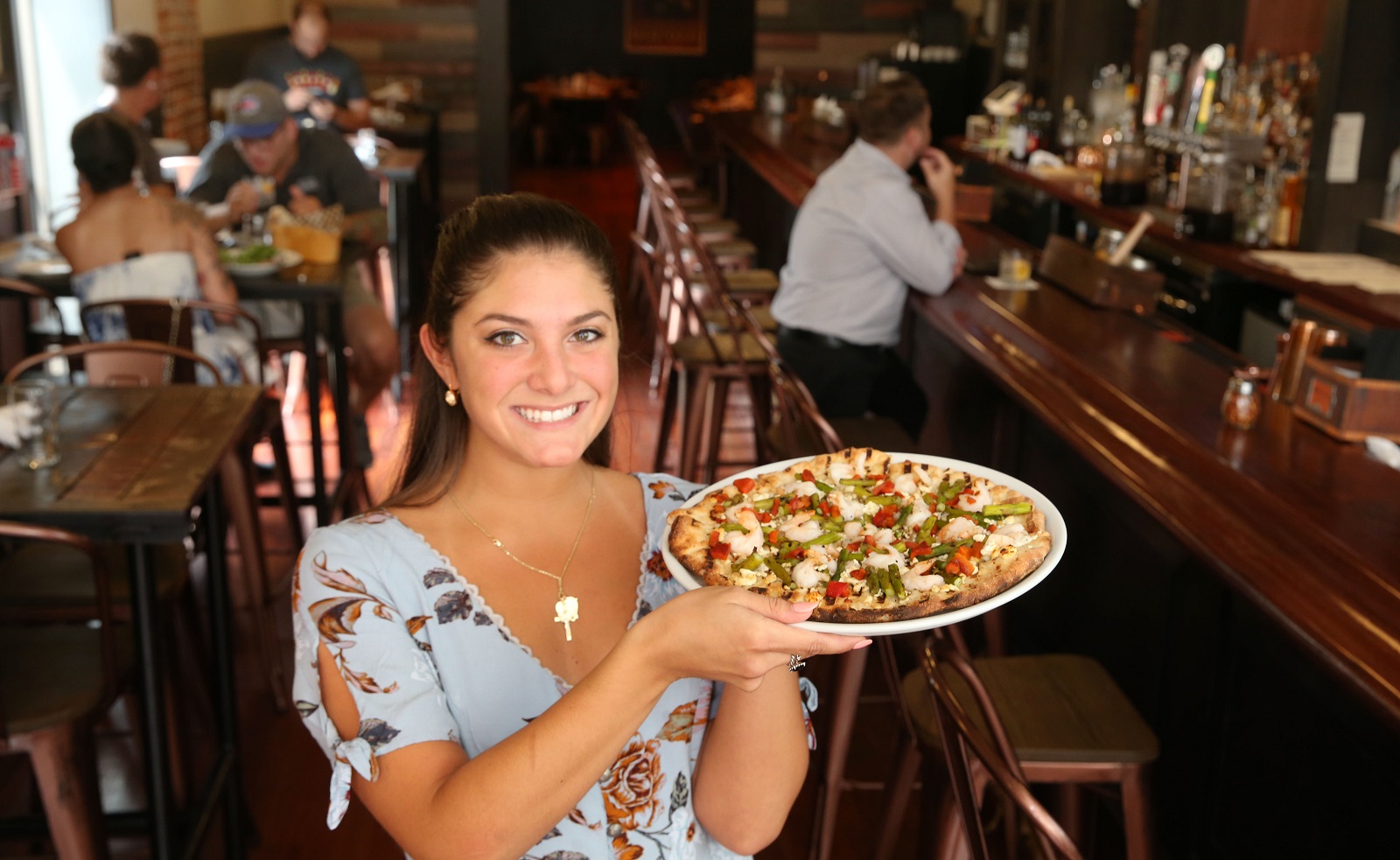 Since my reviews are usually based on a single visit, it would be fair to note that my impressions were colored by a perfect August evening, blue skies and a cool, gentle breeze. Chippewa Street was between lunch bustle and late-night hustle. The patio was mostly empty when we arrived and mostly full when we left in the last glimmers of daylight.

Fresh ciabatta and soft butter kept hunger at bay while it became clear, reading the menu, how Frankie’s positioned itself in Buffalo’s Italian universe. 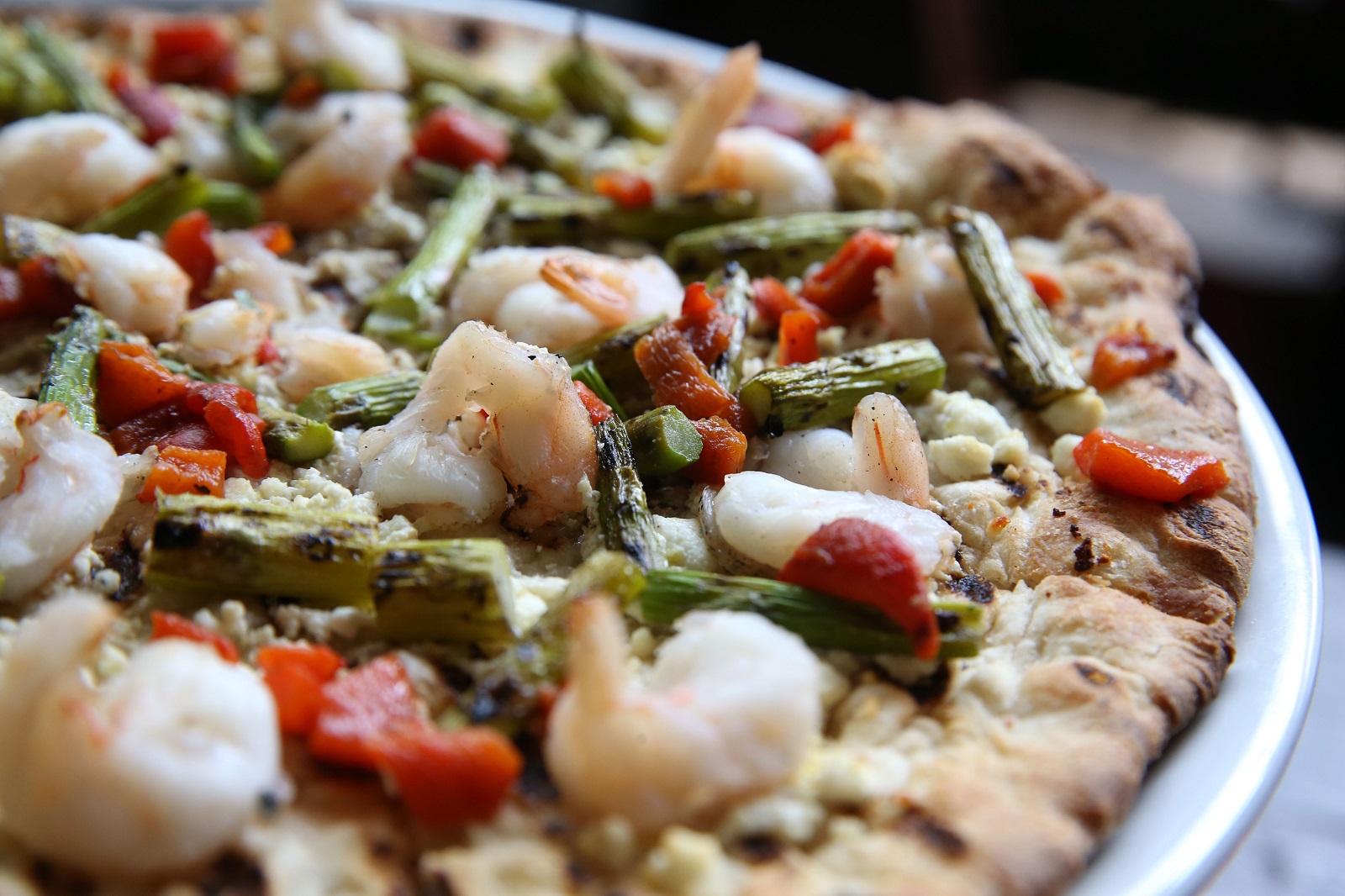 That doesn’t mean it’s gone completely unmoored from the Buffalo Italian canon. Small artichoke halves topped with toasty breadcrumbs and herbs ($8) were tender and tasty. Fried calamari in a buttermilk crust ($11) were crunchy-tender rings that were a wicked pleasure dipped in pesto aioli.

Arugula and shaved fennel salad ($10) was a light and bright antidote, crowned with juicy grapefruit and orange supremes, and melt-in-your-mouth Parmigiano-Reggiano shards. 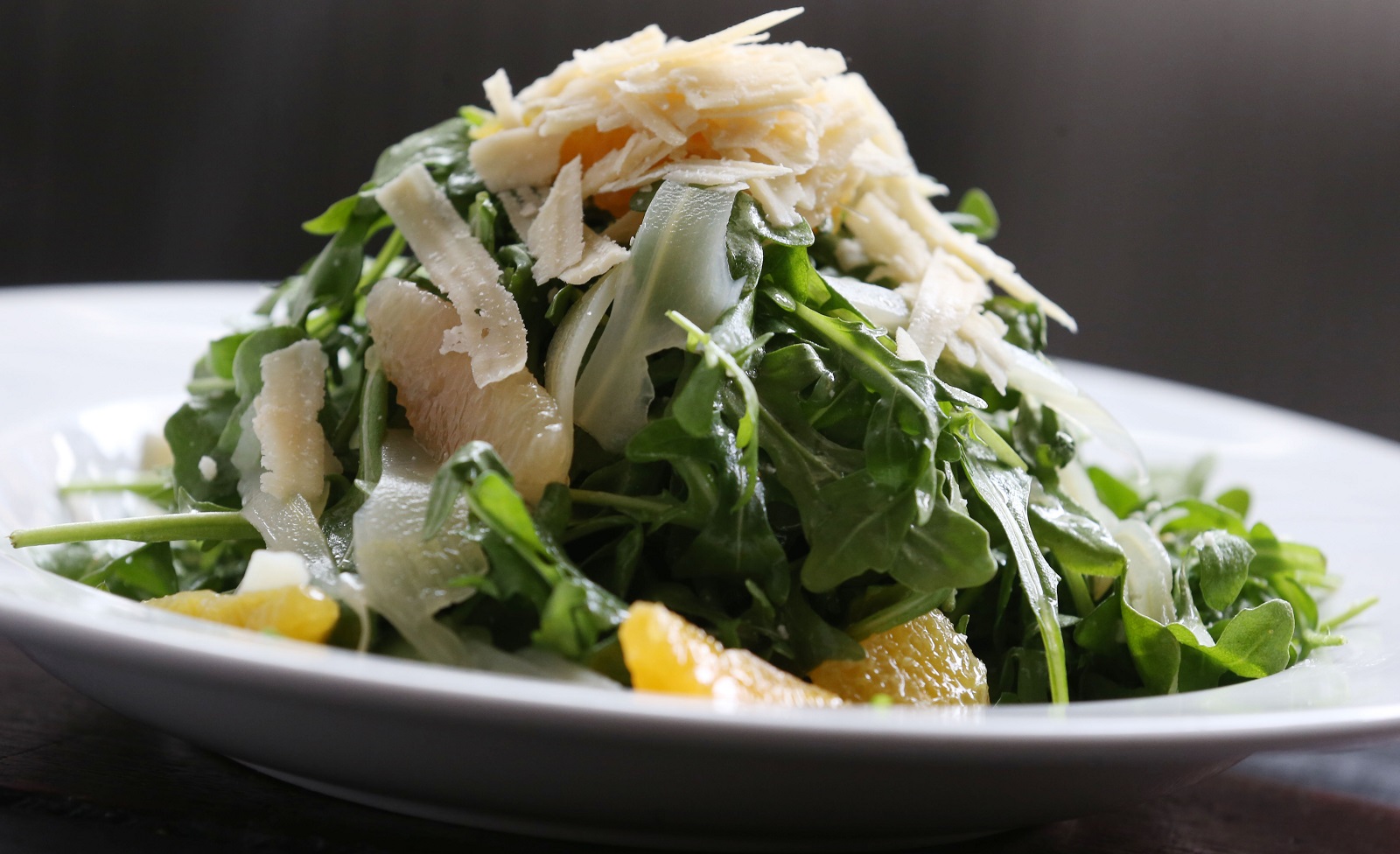 A scallop salad special ($16) brought five adeptly seared medium-sized scallops atop greens, grilled asparagus, roasted red peppers and golden raisins plumped in pinot grigio. A honey balsamic vinaigrette brought it together in a tidy bow. My only gripe was a shell fragment, which I discovered and removed without dental injury.

My pizza choice was gamberetti a asparagi ($17, lead photo), shrimp with grilled asparagus and lemony goat cheese on an unusual grilled crust. That step added a welcome touch of char to the foundations of a crispy, tangy combination platter of asparagus, roasted red pepper and still-tender bite-sized shrimp.

Entrees kept the momentum going. The most ordinary one would not have seemed ordinary at lots of area Italian places. It was thin ribeye seasoned, grilled and served with a bit of pink inside. Underneath it was tortellini in a Chianti cream sauce with roasted portobello mushrooms ($24). 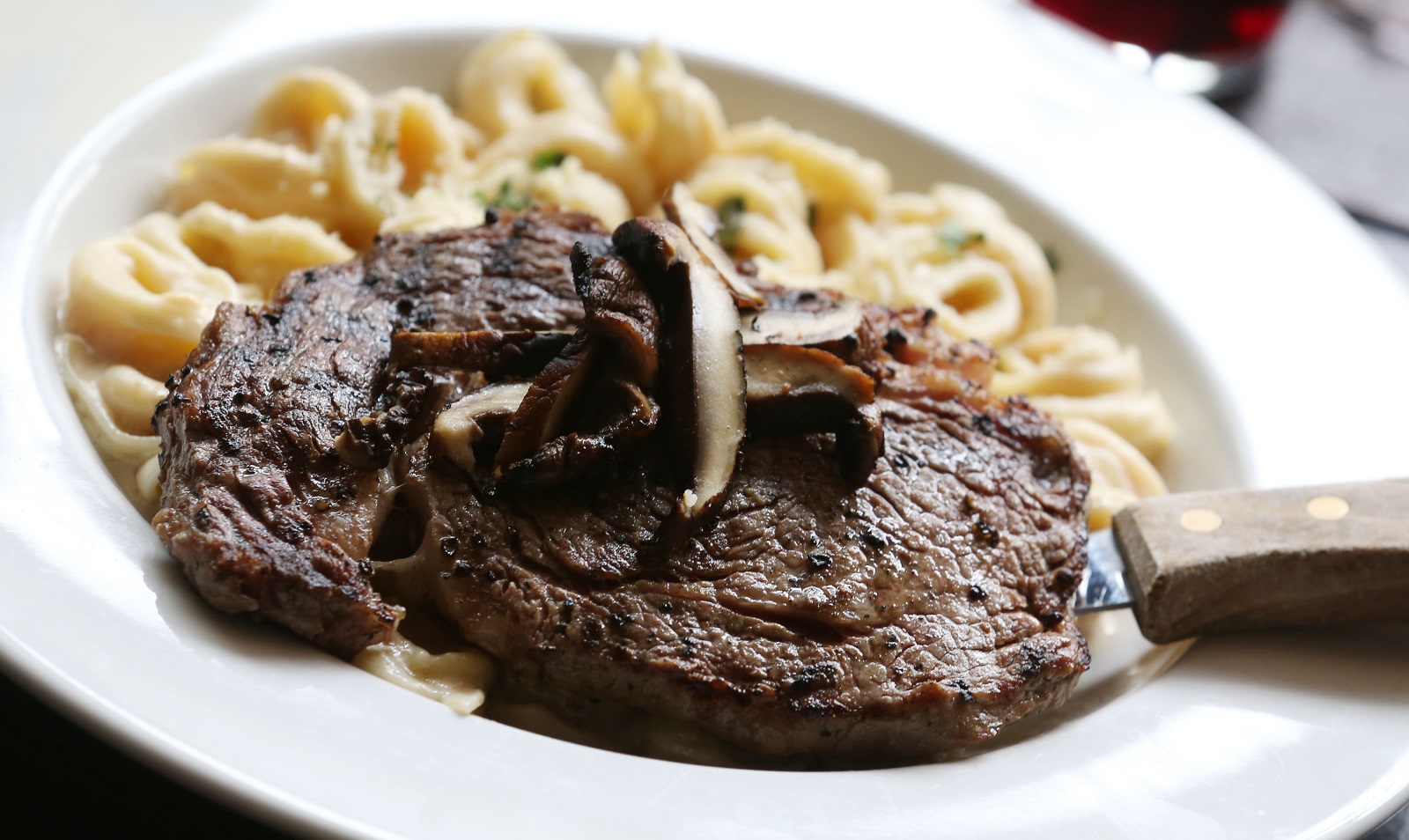 The risotto with shrimp, peas, lemon and mint was even more satisfying for its subtlety. Perfectly cooked rice had a hint of bite left, tender shrimp, the soothing herbal aromatherapy of mint, and a perky lemon finish. It was my favorite dish.

It had serious competition, though, from a generous slab of halibut crusted in ground porcini mushrooms ($29) and a veal loin deployed over yellow roasted pepper sauce ($29). The fish offered a heady, woodsy aroma and plenty of sweet eating, even if slightly chewy at the edges. The veal, pink inside, was hearty, accentuated by the barely sweet pepper sauce. It came with garlicky greens and rigatoni.

Desserts ($8), made in-house, included a cuddly butterscotch budino enriched with dark rum, swirled with salted caramel sauce and topped with a pouf of whipped cream; delicate tiramisu shoehorned into a jelly glass; and a sturdy, satisfying chocolate peanut butter terrine. A red-raspberry-dominant mixed berry sorbet won top billing among an ensemble cast of sorbets and gelatos. 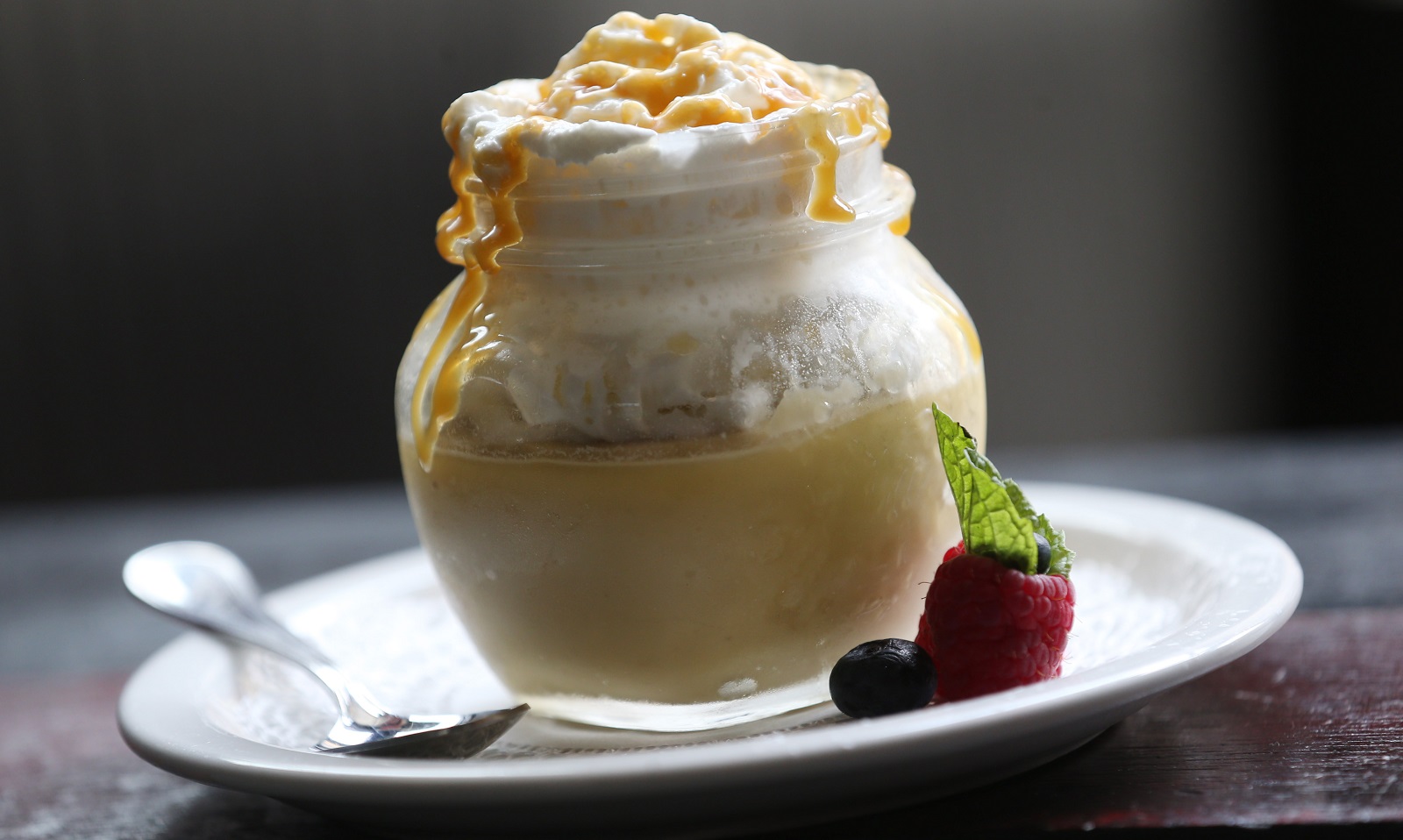 Service was sound, with few moments of unrequited server-seeking. One nit: peppermill-wielding servers are suave. Maladjusted grinders depositing cracked half-peppercorns instead of ground pepper are not.

Manno recognized me, but I could not tell; my table didn’t seem to get any more or less server attention than others. The plate of limoncello shots and giugiuleni sesame cookies after the meal made me wonder, but Manno said everybody gets those, a traditional Italian lagniappe. (Also roots Italian: the “+39” on the name; it’s the country code if you’re telephoning Italy.)

Frankie Primo’s +39 delivered a surprisingly sophisticated meal on a street better known for shot specials. Its food makes it a worthy destination year-round, but try to get there during peak patio season to soak up a compelling cocktail of food and sun. The inspiration might be Amalfi Coast, but the address is Buffalo – and winter’s coming. 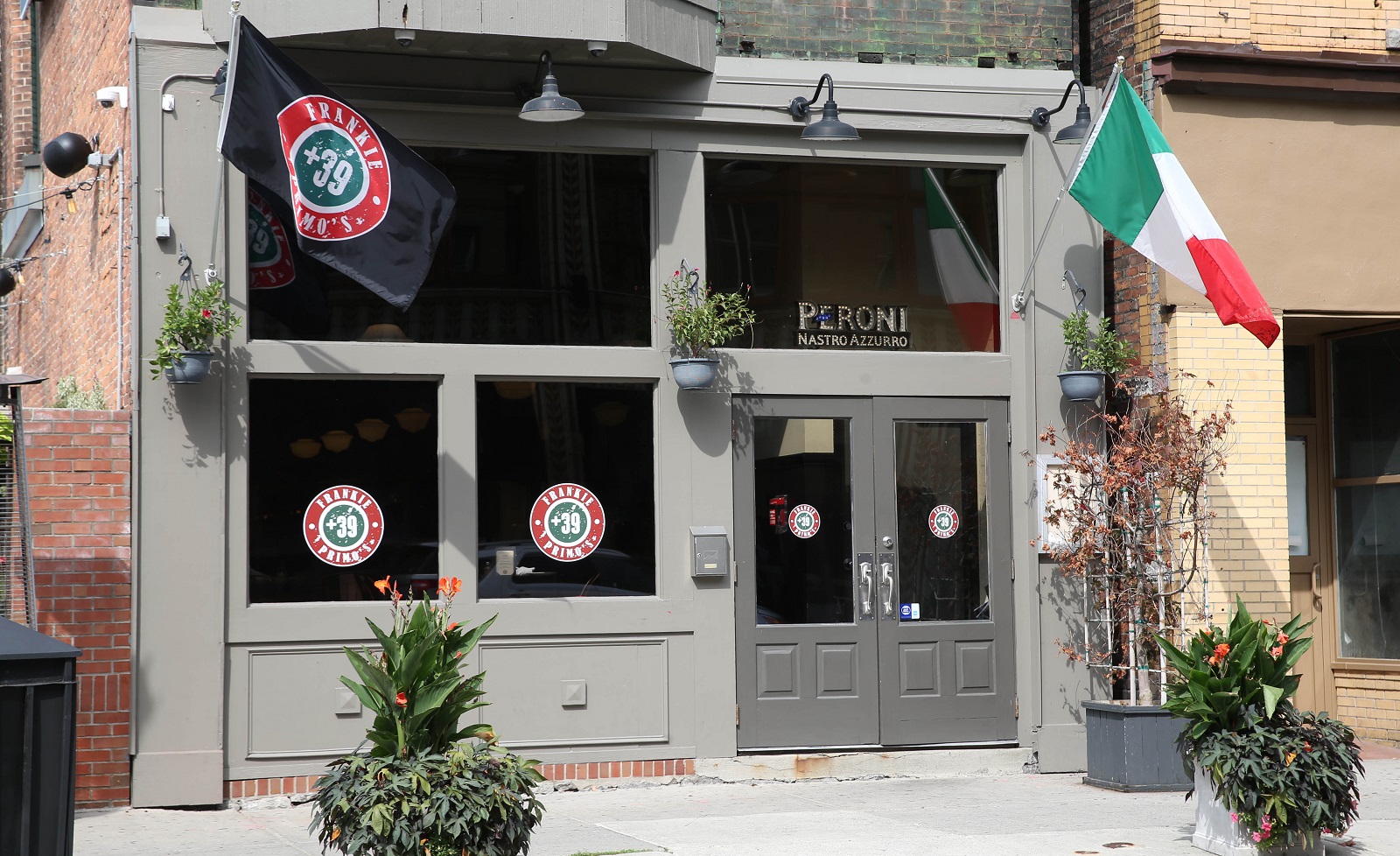