Fishing competitions have a specific purpose from the standpoint of promotion.

The 40th Annual Greater Niagara Fish Odyssey Derby (representative of Erie, Niagara and Orleans counties) concluded on Aug. 28 and some impressive catches came to the scales around Western New York. More than $15,000 in cash and prizes were handed out to enthusiastic anglers – young and old, male and female. Four decades of fishing the local waters of the Greater Niagara Region is noteworthy in and of itself, revealing local hotspots.

And it’s a perfect stage to help kick off a new fishing report with The Buffalo News.

Matt Dunn of Newfane was the Grand Prize winner in the Adult Division of the Odyssey with a 31- pound, 5-ounce Chinook salmon. He caught the prize king fishing the Niagara Bar at the drop off, using a spin doctor and A-Tom-Mik mirage fly on his dipsy diver set back 175 feet on a No. 1 setting, trolling the ledge.

Salmon are stacked up on the Bar right now. Staging kings have started to move in closer to shore, especially in Olcott, where Wes Walker at The Slippery Sinker reports kings just off the pier heads with the convergence of increased flow from 18 Mile Creek and northerly winds pushing colder water in tight. While trollers are working cut bait, flasher-fly rigs, plugs and spoons from 30 to 100 foot depths, pier casters have hooked up a few by casting glow Cleos at night to the north.

The top Odyssey brown trout, weighed in by Dennis Stabler of Lockport at 17 pounds, was a surprise when he hit the personal best while trolling 300 feet of copper and a flasher-fly in 80 feet of water off the red barn between Wilson and Olcott. Top Odyssey lake trout was a 17-pound, 5-ounce fish from the Niagara Bar. It was reeled in by Pat Barber of Niagara Falls from 80 feet of water on the Niagara Bar using a greenish Kwikfish lure as an enticement. The Lake Ontario Counties (LOC) Fall Derby continues to Labor Day. Leading salmon for the $25,000 prize is a 33-pound, 13-ounce king hauled in by Richard Clark of Tyler Hill, Pa. Check out www.loc.org. 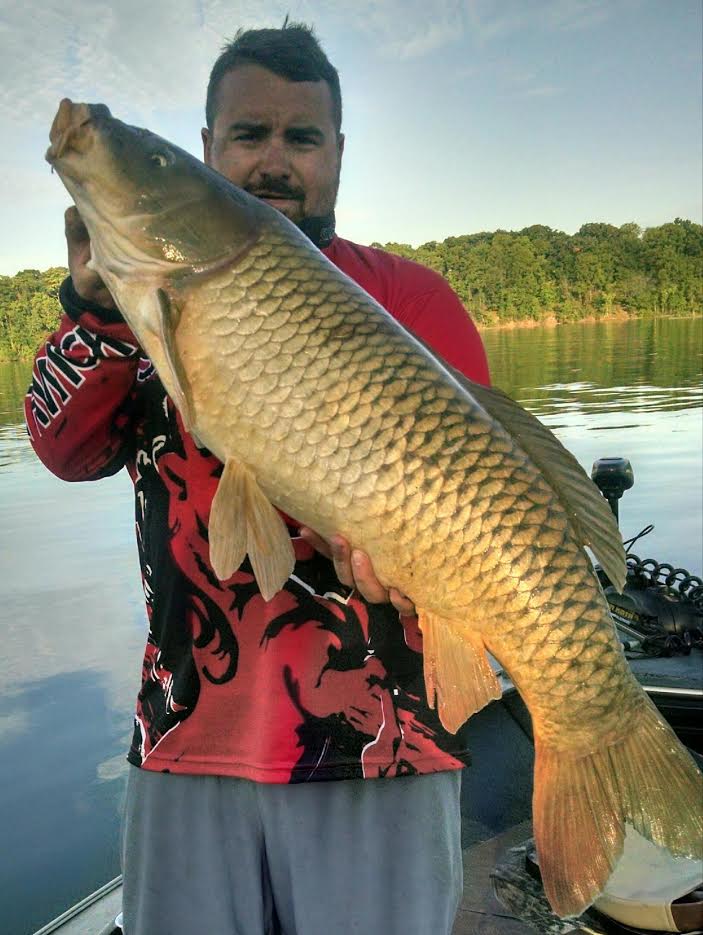 Nick Calandrelli with his monster carp

While the first salmon have been seen breaking the surface in the lower river, more anglers are targeting walleye and bass. One of the attributes of that stretch of water below the falls is its diversity. Just ask Nick Calandrelli of Lewiston, who was walleye fishing in the Niagara River Anglers Association’s Lower River Walleye Contest on Saturday. While he did catch three ‘eyes and a few bass, he also hit a 25-pound, 10-ounce carp on a worm harness in the Johnson Drift to win that division in the Odyssey. A little further down river at the mouth, Steve Majka of Niagara Falls was power trolling an orange and gold worm harness to take the winning walleye, a 12-pound, 10-ounce lunker. He also won the NRAA walleye tourney with two fish weighing 13.86 pounds. Above the Falls, some nice bass are being reported by anglers. Thompson’s Hole produced a 7-pound, 3-ounce monster during a bass tournament recently, but they were not in the Odyssey. Bass are hitting tubes, drop shot rigs and live bait. Take caution venturing into Canadian waters. Make sure you call into (888) 226-7277 when you are entering into those waters. Passports are the preferred choice, but you can also use an enhanced license or a driver’s license and birth certificate. The only live bait you can use is worms, kept in either bedding or water. No crayfish, minnows or leeches.

Smallmouth bass should be starting to go on their feeding frenzy soon and a good case in point was the winning bronzeback in the Fish Odyssey. Dave Muir of North Tonawanda hit a 6-pound, 6-ounce smallie near the south gap of Buffalo Harbor when rough conditions chased him (Dave) off the lake. He was using a drop shot rig offering up a shiner when the first-place fish hit. Try 30 to 40 feet of water with any kind of live bait, tubes or drop-shot rigs. The walleye bite has really turned on according to Capt. Joe Fonzi. He gives a “thumbs up” from Sturgeon Point to the Pennsylvania State Line in 50 to 70 feet of water. Try to keep your baits – worm harnesses or stickbaits – within 10 feet of the bottom. Limit catches are possible. The jig is up off Dunkirk.

Smallmouth bass are being caught off Warner’s Bar according to local guide Craig Robbins. Crayfish or 4-inch power worms are working best. Walleye fishing is starting to pick up for jiggers in the deeper holes of Upper Dewittville Bay and Warner’s Bar in 18-to-28 feet of water. Use a black hair jig tipped with a crawler.