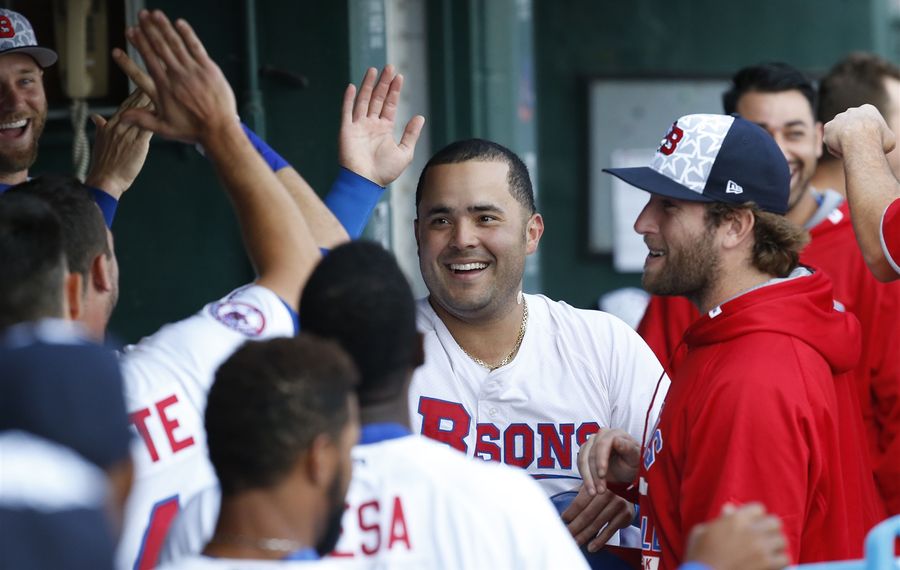 It's so simple, it's almost boring.

Jesus Montero comes to the ballpark ever day, works on his swing in the cages and takes batting practice with the team. He works on his routine. The same routine. Every day. Every time. Consistency isn't thrilling, but it does produce results.

The 26-year-old was named to the postseason International League All-Star at the designated hitter spot on Tuesday afternoon.

Montero, the lone Buffalo Bison to make the IL All-Star squad, entered Tuesday's game against the Scranton/Wilkes-Barre Rail Riders with a .321 average -- just .001 behind three other players in the race for the IL batting title. He ranks second in the league with 151 hits and is fourth with 209 total bases.

This season he has hit .283 better in all five months saving his best for August when he is hitting .395. Montero has a 20-game on-base streak while notching hitting streaks of 13 and 15 games earlier this season.

Consistency. It's built daily before the game even starts. And the all-star nod is a bit of approval from the baseball world that his work had meaning.

"It means I put all my work together, all my routines, batting practice in the cage," said Montero, a native of Venezuela. "The work outside really, how do you say it, worked for me. It worked for me, all I did. It was good just to keep hitting and keep helping the team. ... In the cage I do all my routines every single day. Try to go outside, get loose. Try to go to the gym, workout. If I do that, I know I’m going to be good at the plate. Sometimes you get in a slump but that’s part of the game."

There haven't been many slumps for Montero this year. He's been the most consistent hitter for the Herd, ranking second on the in doubles (24), home runs (11) and runs batted in (58). He was a midseason IL Al-Star as well, going 1 for 4 in the Triple-A All-Star Game.

"I just try to have good at-bats," Montero said. "Obviously I want to hit base hits. I want to hit home runs, doubles or whatever I can get. I think about it. I want to win. But whatever happens, happens. Hopefully for the best. I’m just going to do the best out there to help the team win."

Wins haven't been consistent for the Bisons as the team went through winning and losing streaks and found itself out of contention in a stacked IL North Division. Players went up to Toronto and came back down. Through it all, Montero kept coming to work, kept having quality at-bats, kept getting hits for the Bisons.

Might that mean a September call-up? It could. Although Montero is not on the Blue Jays 40-man roster, the team has room to create a spot and give him the deserving promotion. Meanwhile, Montero, who has 226 big leagues games through five seasons with the New York Yankees and Seattle Mariners, keeps working at his game.

"I’ve been patient the whole year," Montero said. "Obviously they haven’t given me the opportunity to be in the big leagues you know, but it’s a part of the game, part of the system they’ve got. I’ve just got to keep doing my work and then hopefully, I don’t know what’s going to happen in September. Hopefully I go up. I don’t know.

"I just know what kind of player I am. That’s the most important thing. I just come here, play first, DH. I know who I am. If they don’t have a spot for me, I’ve just got to be patient, wait for it and try to do my best here. The numbers talk so I don’t need to say anything else. Just keep doing it and have fun.