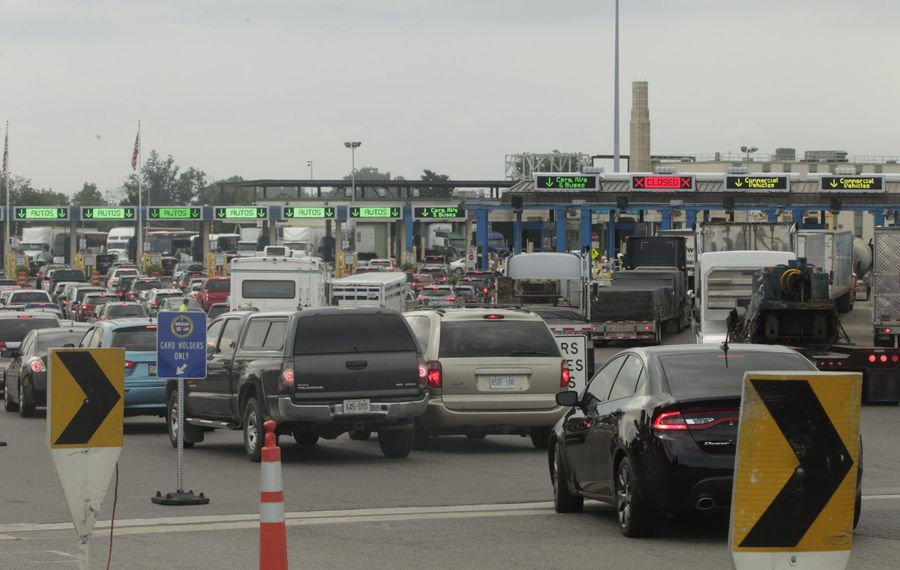 When Canadian fans of Kanye West returned home after Saturday night’s concert in downtown Buffalo, they again found themselves sitting in the now-familiar long lines of the Peace Bridge.

But an already unpleasant experience devolved in something even more exasperating, say bridge officials, when the Canada Border Services Agency began closing lanes in Fort Erie, Ont., at the end of their shift. Motorists already waiting significant times had to wait even longer.

“In the midst of all that congestion, CBSA shut down more lanes, and that’s our frustration,” said Ron Rienas, general manager of the Peace Bridge Authority. “People were waiting for an hour and then watched as they shut down more lanes. That doesn’t make any sense.”

Congestion and long lines at inspection booths have become the norm for Canada-bound travelers this summer, as bridge officials continue complaining about inadequate staffing at all Niagara River crossings and across the entire northern border. The union contract, which expired in June 2014 but remains in effect, allows employees two weeks off in the summer, as well as unpaid family leave, and Peace Bridge officials say that there has not been enough staff to fill in for those taking off.

Now a consortium of bridge authorities, border cities, Member of Parliament Rob Nicholson from Niagara Falls, Ont., and even Sen. Charles E. Schumer, D-N.Y., are banding together to demand action.

They are passing resolutions, writing letters and seeking meetings to encourage some kind of Canadian government response to a problem with no end in sight. Schumer, according to his office, plans to take up the matter with the Canadian ambassador within the next few days.

And because nobody is addressing the frustration of sitting in lines that sometimes reach two hours, bridge officials fear that word of traffic jams will discourage commerce and the people who make 30 million crossings into Canada each year.

“Now there is a concerted effort to get the message to the minister of public safety and CBSA that long lines are not in the best interest of Canada or the traveling public,” said Lew Holloway, general manager of the Niagara Falls Bridge Commission.

Sam Hoyt, Peace Bridge Authority chairman, noted that Rienas has alerted many of the northern border crossing officials through his position as president of the Public Border Operators Association.

“Ron has mobilized the other border crossings and really turned up the volume on the Canadian federal government that this very, very serious problem is impacting the economies of both countries,” Hoyt said. “Unfortunately, we have not seen any progress at all.”

Hoyt said he and Rienas would soon travel to Toronto to enlist the aid of Province of Ontario officials.

“Sitting in long lines of slow-moving traffic awaiting Customs clearance on hot summer days discourages visitors from attempting to come to Canada, hampers the movement of goods in both directions, negatively affects commercial enterprises on both sides of the border, clogs local streets and major highways and degrades the environment,” the Town of Fort Erie said in a resolution.

All of this contrasts with the situation on the U.S. side, where Customs and Border Protection earns high marks for beefing up staff levels when it anticipates heavy traffic stemming from concerts, sporting events or normal peak travel times.

Nicholson, the Parliament member, did not return a phone call seeking comment. The CBSA, meanwhile, would not consent to an interview, but issued a statement that did not address questions about what steps might be taken to alleviate the backups.

“Our clients are important to us, and we value their feedback,” the statement said. “We understand the concerns of stakeholders and we are committed to finding ways to mitigate these concerns.”

The CBSA also said that it makes every effort to schedule inspectors to handle peak times, assigns overtime to augment staffing numbers, applies flexibility in temporarily moving officers from one port of entry to another, and is increasing the number of new officers as they become available.

“There are instances, such as during peak travel periods and unexpected influxes of traffic, where travelers do experience longer than normal wait times,” the statement said. “Every effort is made by the CBSA to minimize, and whenever possible avoid, these delays.”

Hoyt noted that the summer’s high traffic levels will soon decrease, but he also wants Ottawa to recognize the problem and take the proper steps toward alleviating the problem next year.

“The peak season is coming to an end,” he said. “But we have to change moving forward so this does not happen again.”