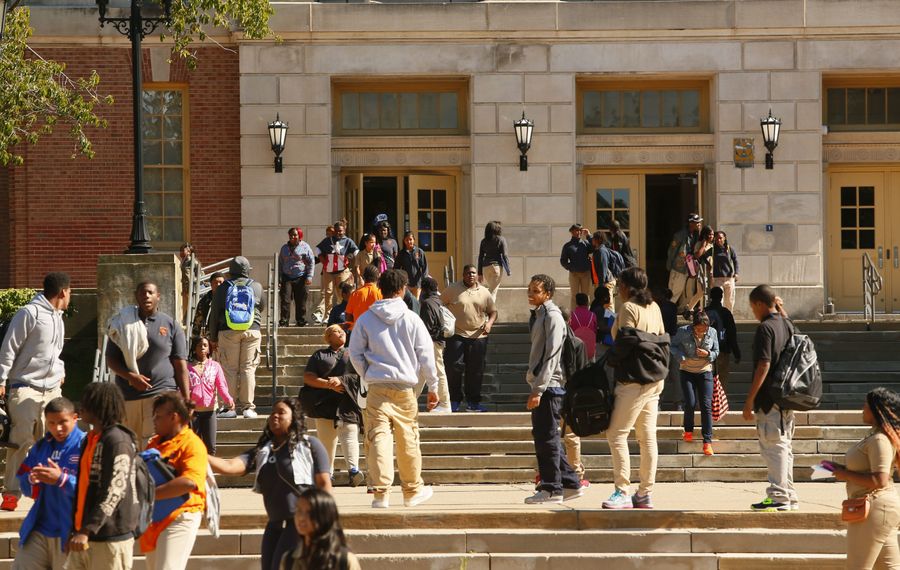 There are those alumni who get together every decade or so to catch up and reminisce about the good old days, then quietly go their separate ways again until the next high school reunion.

Then, there are the alumni of Bennett High School.

The large and passionate alumni base has stepped up as the self-appointed guardian of its beloved alma mater amidst a tumultuous few years for the stately brick high school set on a hill overlooking Main Street for nearly a century.

When there was a push to turn Bennett into a charter school, it was the alumni who spoke up and pushed back.

When the School Board debated how to turn the struggling high school around, it was the alumni who drew up their own proposal.

And when Bennett gets a reboot in September, it’s the alumni who will share in the credit for ensuring the school’s long, rich legacy lives on.

In fact, these days, the board of the Bennett High School Alumni Association regularly meets with district administrators, as they chart a course for a “new” Bennett.

“We are ever-present to the administrators in the Buffalo Public Schools to say, ‘We want and envision a quality program here for students,’ ” said Puzio, a retired superintendent for the Batavia City School District. “And we are not going to quietly go away.”

Built on land donated by prominent businessman Lewis J. Bennett, the four-story high school opened in the fall of 1925 with an enrollment of more than 2,500 students. Just a year later, they would erect annexes to ease the overcrowding.

Over the years, Bennett would become Buffalo’s pre-eminent high school, producing a vast network of graduates who went on to do well for themselves, including such notables as basketball Hall of Famer Bob Lanier, former model Beverly Johnson and Broadway director and choreographer Michael Bennett.

Its alumni association is the largest among Buffalo’s high schools, said Neil Lange, a retired Bennett teacher. It boasts a mailing list of more than 5,000 along with 1,000 dues-paying members. When the school celebrated its 75th anniversary in 2000, as many as 1,000 people showed up to the event at the Buffalo Niagara Convention Center.

They still fondly recall their days at Bennett.

There was that time, for example, when Robert Kennedy spoke at the high school, and there was that day Frankie Avalon sang to the students in the auditorium. Alumni still tell stories of the 1960s rioters infiltrating the school and beseeching Bennett students to join them, or how the school kept a solemn tally of the young Bennett boys who went off to war and never returned.

Or how about the time singer Rick James showed up unannounced? It caused such a commotion among the students that James and his entourage were shown the door.

“It may be more of the older demographic,” said Carol Caserta, a 1960 Bennett graduate and former counselor at the school, “but people have this loyalty and passion.”

“And friendship,” said Marsha Jadd, from the Class of 1958. “I’m going out next week with four people I graduated with.”

The toll on Bennett

By the 1970s, though, Bennett had started to suffer.

People were moving out of Buffalo in droves. City Honors, which began as a program at Bennett, was on its own and the other specialty magnet programs created across the city lured many of the top students, Vella said.

It took a toll on the academics at Bennett.

“Bennett wasn’t the only school that occurred in. The whole dynamics of the schools changed,” Vella said. “We had a two-tiered system. It made the haves and have-nots.”

Low test scores and poor graduation rates eventually caught up to Bennett, and the Board of Education made the decision five years ago to phase out the old high school and phase in a new one using a turnaround plan – new leadership, new programs, new approach.

The plan of the majority on the School Board was to target some of the district’s struggling schools and turn them over to high-performing charters. Bennett was on the list.

“The passion of the alumni for Bennett High School was so great that the word got out,” Lange said.

They lobbied state lawmakers. They emailed School Board members. They bused Bennett students to board meetings to voice their opposition.

“This was always designed and meant to serve the children of North Buffalo,” Puzio said. “To close this building or make it a charter school was to cut out a huge piece of the history of Buffalo Public Schools.”

“It really wasn’t all about just saving the building,” said Marilyn Wittman, who retired as Bennett principal in 2004 after 20 years. “It was about hope for the kids in the neighborhood.”

The idea to convert Bennett into a charter fizzled. There were some questions about whether the district could legally turn over the school to a charter, while the reception from interested charters was lukewarm, recalled James Sampson, the former School Board president.

Then, there were the alumni.

“They were incredibly vocal,” Sampson said.

“There’s no doubt about it,” said Board Member Sharon Belton-Cottman, who fought the plan. “Had we not had a strong alumni association at Bennett, Bennett would not be there.”

“There’s a lot of Bennett alumni – a lot of powerful alumni – and these people standing up is an example of what can happen when the community gets involved,” she said. “That was a really strong piece that really didn’t exist in most schools.”

The board, instead, agreed to move Middle Early College High School and share space at Bennett with the students that remained.

But there was still the question of how to phase in a “new” Bennett. The School Board had rejected the alumni’s detailed proposal, which called for creating a neighborhood high school that included an honors program, accelerated remedial instruction and an extended day.

Then came last year’s hiring of Superintendent Kriner Cash, who set out to rebuild something special again at Bennett.

This year, the district rolled out plans for the Computing Academy of Technological Sciences at Bennett. It will focus on introducing students to fields in computer science and software engineering – animation, gaming, coding, computer hardware, programming. It will start in September as a program under Middle Early and begin with a ninth-grade class of 102 students.

The “old” Bennett will phase out with its last remaining class in 2017; the “new” Bennett will grow into the old, familiar surroundings under the new plan and the direction of a new principal.

It also will serve as one of the district’s designated “community” schools, promising more outside resources and services to help students and their families.

“We’re realistic,” Puzio said. “We understand we are up against some challenges in urban education.”