Fifty years ago this week in Buffalo, Gov. Nelson A. Rockefeller assured visiting President Lyndon Baines Johnson that the Buffalo River would be "all cleaned up" by 1970.

But Johnson's August 1966 visit to the Queen City – and what he saw here – proved a catalyst in launching early environmental restoration efforts in the Great Lakes.

"Lake Erie must be saved," the president said, according to an August 1966 front-page article in The Buffalo News detailing his visit.

"It is a problem we are facing, but a problem that our states and cities must face too, so this great inland sea will sparkle again," Johnson said.

The president explained the nation's "abundance" and "industrial might" in places like Buffalo, Cleveland and other Great Lakes cities led to the pollution. 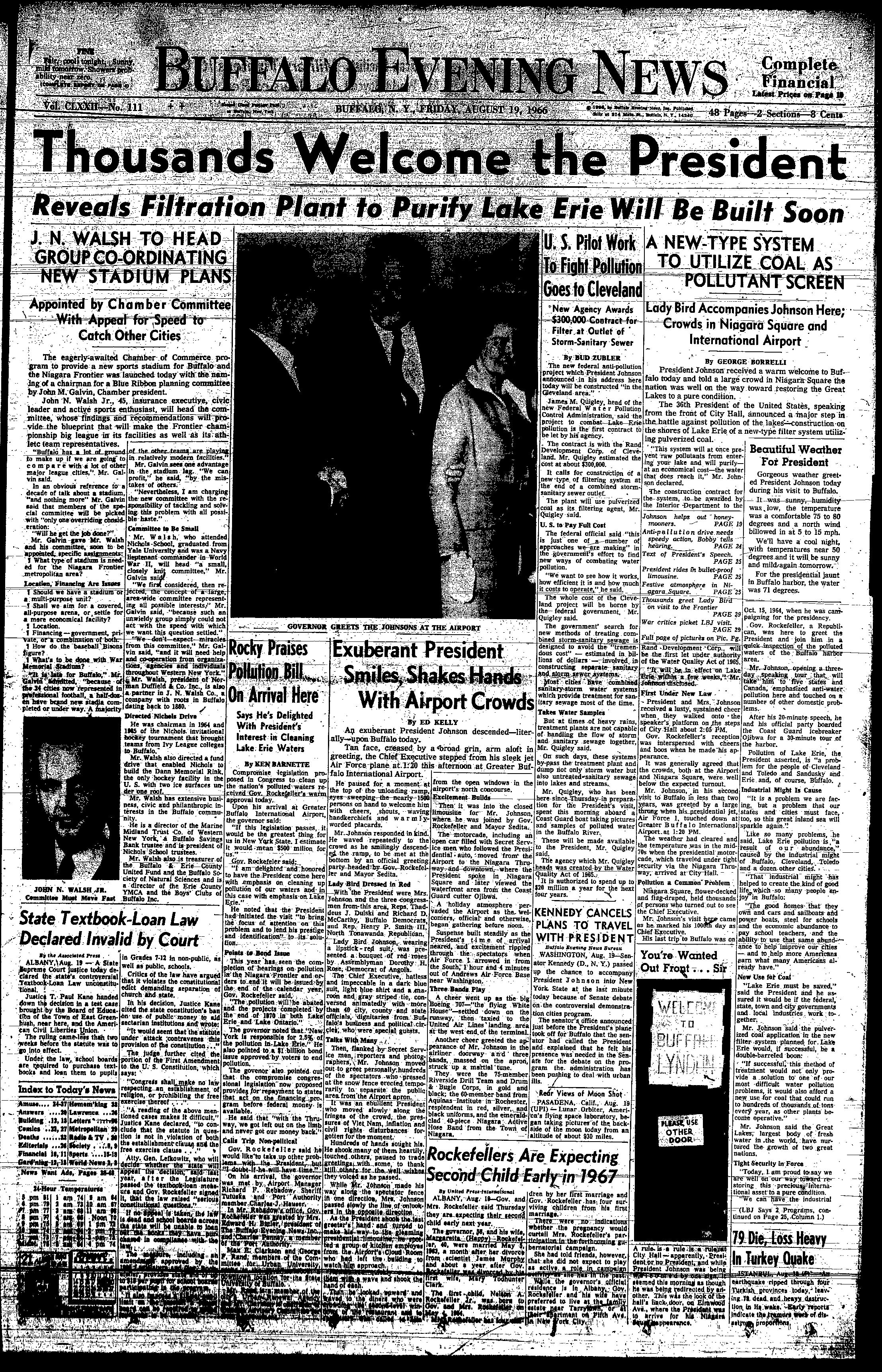 Johnson said: "That industrial might has helped to create the kind of good life which so many people enjoy in Buffalo: the good homes that they own and cars and sailboats and power boats, steel for schools and the economic abundance to pay school teachers, and the ability to use that same abundance to help improve our cities – and to help more Americans earn what many Americans already have."

Cleaning up area waterways such as the Buffalo River and its harbor continues in 2016, but the progress so far has been stark.

The cleanup can be traced to three major stages over the last half-century since Johnson's visit.

Area grassroots conservationist Stanley P. Spisiak is most credited with getting Johnson to Buffalo and with showing off how disgusting the condition of the Buffalo River was.

Spisiak, who was affectionately known as "Mr. Buffalo River," invited the First Lady "Lady Bird Johnson" to Buffalo after meeting her earlier in 1966 when he was honored by the National Wildlife Foundation as "Water Conservationist of the Year," according to a retrospective of Spisiak's life published by the U.S. Army. 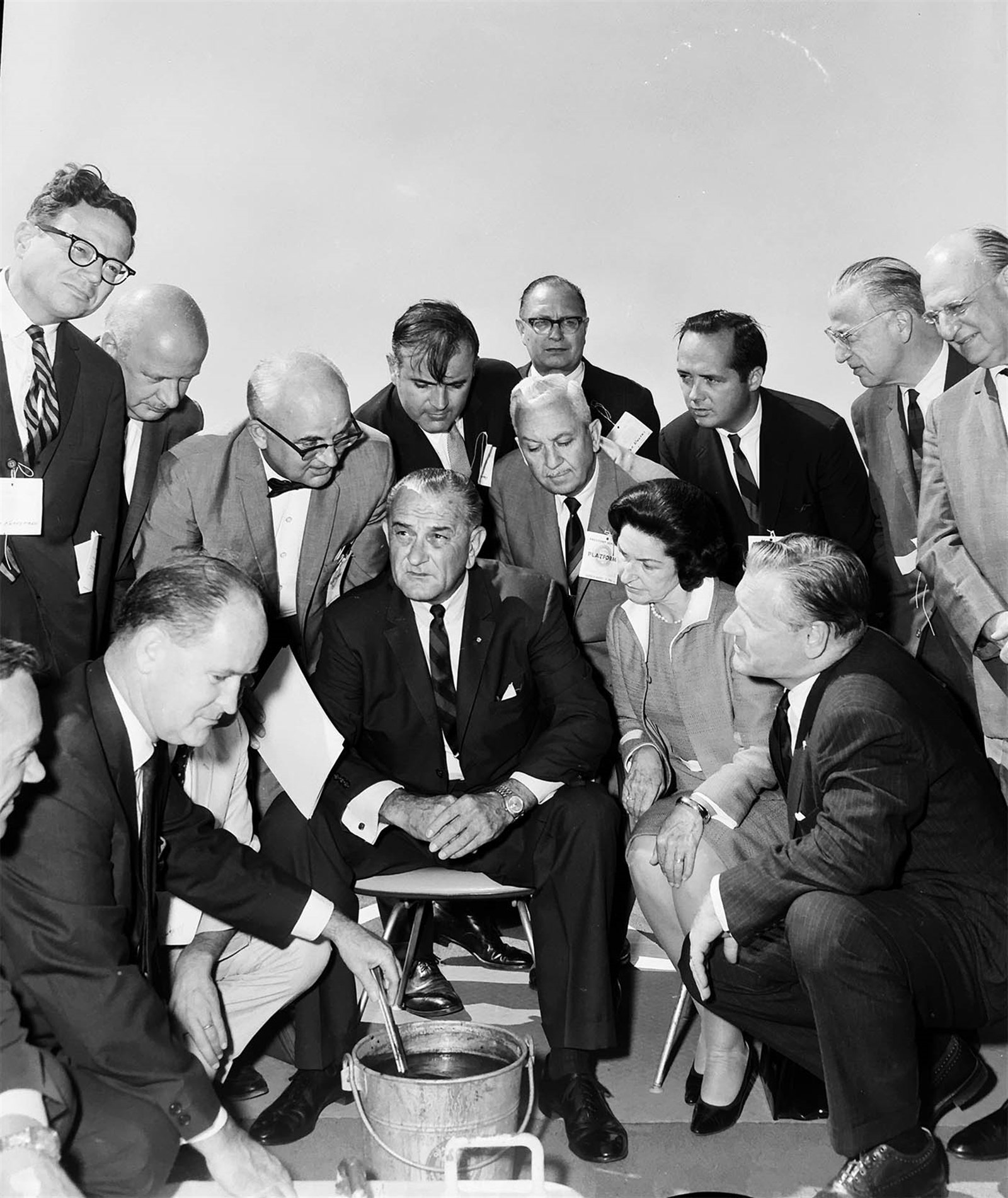 "On August 25, 1966, Lady Bird not only showed up with President Johnson and then New York Governor Nelson Rockefeller, but a host of VIPs. Stan recounted, 'President Johnson was my guest for three-and-a-half hours. I showed him a bucket of sludge from the Buffalo River and gave him a big spoon to stir it with.' LBJ's words to Stan were simple and right to the point: 'Don't worry. I'll take care of it.' And he did," according to an excerpt from the retrospective.

Spisiak is the late great-uncle of Jill Spisiak Jedlicka, the executive director of Buffalo Niagara Riverkeeper.

Johnson signed an executive order that prohibited dumping polluted sediment dredged from the federal navigational channels like the Buffalo River in open waters like Lake Erie. It's what led to the eventual construction of confined disposal facilities by the U.S. Army Corps of Engineers.

The president's Buffalo visit was the first of "a three-day speaking tour" through five states and Canada focusing on water pollution and other issues, according to an Aug. 19, 1966, edition of The News.

Johnson took a half-hour tour of Buffalo Harbor, including the river and Lake Erie, aboard the USS Coast Guard cutter Ojibwa with Rockefeller, Spisiak and others, the article reported.

In the next day's News, Rockefeller said that Lake Erie's pollution "astonished" the president.

"I told him we would have it all cleaned up in this area by 1970," Rockefeller was quoted as saying that day.

When 20 million Americans took to the streets and public parks on the first Earth Day on April 22, 1970, unfettered environmental pollution could no longer be ignored, according to Rep. Brian Higgins, an ardent advocate for Buffalo's waterfront and one of the early members of the Friends of the Buffalo River organization.

"The environmental movement was a bottom-up movement that forced people out of the their comfort zone," Higgins said.

And it forced a pro-business Republican president – Richard M. Nixon – to sign seven major pieces of environmental legislation, including the Clean Water Act of 1972.

Pollution wasn't being legally dumped into area waterways like the Buffalo River between 1972 and the late 1980s.

Because of the Clean Water Act.

And because much of the industry left town.

In its wake, however, industry's nearly century-long legacy of environmental mess persisted.

Enter Friends of the Buffalo River.

The precursor to the modern Buffalo Niagara Riverkeeper, the "friends" organization was founded by a few concerned area citizens in 1989 that included environmental activists Ken Sherman, Lynda Schneekloth, Barry Boyer, Margaret Wooster and others, Higgins recalled.

Higgins, then a city councilman, was invited to join their table discussions at the Harbor Inn on Ohio Street.

They agonized over the still-polluted condition of the river and plotted courses for fixing it.

"It's as grassroots as it gets," Higgins said.

The all-volunteer organization helped government come up with plans for fixing the river, which was declared one of 43 areas of concern in the Great Lakes just a couple years earlier.

That meant the river was destroyed ecologically.

"That's not a list you want to be on," Higgins said. "It was kind of a leap of faith because at that point there was not a lot of money."

As the 21st century dawned, that faith, and determination, was about to pay off.

"They positioned Buffalo to be ready to take advantage," Higgins added.

The dam finally broke earlier this decade when hundreds of millions of dollars in federal funds finally began flowing into Buffalo and other Great Lakes cities via the Great Lakes Restoration Initiative.

The federal initiative is set up to bring local, state, federal and private entities together collaboratively to fix environmental degradation caused by the region's industrial legacy.

"All the efforts that paved the way to GLRI were in anticipation of the federal government doing the right thing," Higgins said. "On this particular issue...they did the right thing."

Signed by President Barack Obama in 2009, the GLRI was rooted in a 2004 executive order by George W. Bush that first established a "Great Lakes Interagency Task Force" and promoted "a Regional Collaboration of National Significance for the Great Lakes."

The funds led to tens of millions of dollars being allocated to the Buffalo River for cleanup.

"Clean water isn’t just an environmentalist issue anymore, it is the lifeblood of our entire community," Jedlicka said.

After a couple of years of dredging toxins from the navigation channel of the river, by 2013 crews were starting to work on the river's banks.

PCBs, lead, mercury - along with cars, bowling balls and diamond rings - deposited along the 6.2-mile stretch of river during the 20th century were brought to the surface and removed in the cleanup, which occurred between 2013 and 2015.

Much of the toxic material was taken by barge to the Corps of Engineers confined disposal facility on the outer harbor. Some was interred in a hazardous waste landfill.

Last year, with the removal of the toxins complete, work to restore habitat to the river began at several sites from Old Bailey Woods down to Michigan Avenue.

Crews put shoreline areas back to a more natural state, set up pollinator conservation areas, established habitat for wildlife, waterfowl and acquatic life as well as access points for the public.

In the meantime, economic development also returned along the river.

The popular Buffalo RiverWorks is just across the newly revitalized river.

And, what's happened so far "is just a start."

"The recovery of the Buffalo River is still a work in progress," Jedlicka said. "But considering the river was once declared biologically dead, seeing the return of numerous species of fish, birds and human recreation to this waterway, is a major milestone for this community."