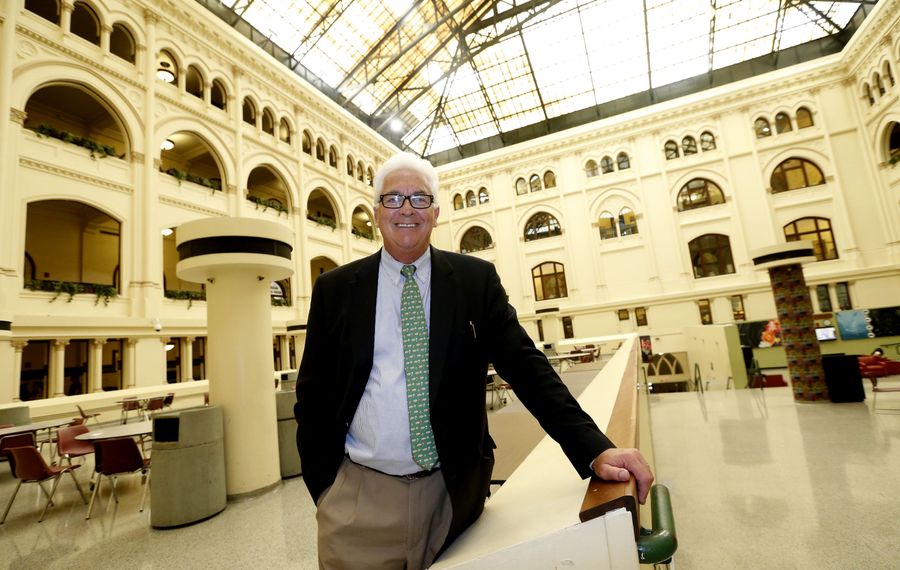 Erie Community College President Jack F. Quinn Jr. helped convince state and county lawmakers in 2010 to set aside $22.5 million for a new facility on ECC’s North Campus in Amherst, and on Wednesday, after years of fits and starts on the project, construction crews finally will break ground.

Quinn’s legacy as ECC president likely will be intertwined with whether the building halts enrollment slides and leads to a revitalized campus, as college administrators have been maintaining for years.

But Quinn, 65, won’t be in the president’s seat to watch the completion of the $30 million project, which includes another $7.5 million in college funds.

On Monday, the former congressman announced he will retire in June 2017, after nine years leading the college of roughly 10,000 students.

Quinn said his desire to spend more time with family dictated his decision.

“I’ll just tell you, I’ll be 66 years old next year. We have two great, wonderful grandchildren that we didn’t have when I started in this position,” he said. “My son lives in Chicago. We want to get there more often. And my mom’s still around – she’s 86.”

Quinn’s four-year contract with the college was to expire March 31, 2017. He agreed to stay on three more months, through the college’s commencement.

The college’s trustees will meet Thursday to accept Quinn’s retirement and to put together a transition plan and a search committee for his successor.

Rep. Brian Higgins, D-Buffalo, Quinn’s successor in Congress, has been rumored to be a front-runner for the ECC job. But he said Monday that he was not a candidate.

“I congratulate Jack Quinn on his impending retirement. First as my predecessor in Congress and later as President of Erie Community College, Jack has been a friend and devoted public servant whose dedication to our region has been undeniable,” Higgins said in a statement. “I want to be absolutely clear that I am not now and will not be a candidate for the presidency at Erie Community College. Rumors to that effect, as well as speculation that I wished to be a candidate for any such position at ECC or any other institution, are completely without foundation.”

Higgins also said through a spokesman that he had not been approached about being president of ECC.

Quinn emerged in 2007 as an unconventional choice to lead the college.

At the time, he had no prior experience in higher education, a field in which presidents historically climb through the faculty ranks. But Quinn had other attributes.

In Congress, he made the kinds of connections that college trustees figured would serve ECC well in annual struggles for funding at the state and county levels. And his affable, everyman persona could help the college tap into more private giving, as well as new collaborations and relationships with businesses and other community partners.

Boyd credited Quinn with making sure the college retained full accreditation with Middle States, after the accrediting body warned in 2011 that ECC’s status was in jeopardy without improvements in its planning.

Quinn also was instrumental in getting expired contracts negotiated and settled with the college’s two largest bargaining units.

“I really think ECC is in a much better spot now than it has been in the past few years,” said Boyd.

But Quinn’s biggest success may have been his securing the Albany funding for a new building at a time when state lawmakers were being particularly stingy because of budget difficulties, said Boyd. Quinn also brokered a deal to get county officials on board by agreeing to have the college pay half of the remaining cost for the Science, Technology, Engineering and Mathematics building.

“If it wasn’t for Jack Quinn, that building would not be happening on Wednesday,” said Dennis Murphy, the current chairman.

Nonetheless, the project has been polarizing for years in Western New York, much like Quinn’s presidency. It sparked a lawsuit in 2014 over whether the county had done a proper environmental review and rekindled debate about whether ECC should continue to maintain three campuses.

Critics maintained that the project is shortsighted and encourages suburban sprawl, while supporters believe it will help enrollment by keeping more Erie County students from pursuing community college degrees in other counties – which annually costs local municipalities millions of dollars in so-called chargeback fees.

The college has faced its share of fiscal turmoil in recent years, in large part due to enrollment declines. The number of full-time equivalent students fell 16 percent between 2012-13 and 2015-16, and is expected to drop again this fall.

Quinn’s critics blame him for spending money on hiring highly paid administrators without proper postings and searches and for failing to combat the enrollment decline with a broad plan to improve infrastructure.

Quinn had a strained relationship with many of the college’s faculty, who resented his efforts to centralize decision making.

“There’s virtually no place in the college for faculty input,” said Richard Robison, who taught in the English department for 37 years until retiring in January.

Robison described ECC as “a broken place” where the “morale was damaged horribly.”

Andrew D. Sako, president of the college’s faculty federation, said that Quinn has done “some things to move the college forward, with the new building and so forth.”

“I think he’s set the table for the next president,” Sako added. “With his leaving, there may need to be a restructuring and a good look at the whole institution in general.”

Quinn and the college’s trustees also faced criticism after a state audit found that senior executive staff received unauthorized raises and bonuses of more than $100,000 between 2012 and 2015, and the college hired contractors without seeking competitive bids for their services and in some cases without written contracts.

Boyd said the college addressed all of the auditors’ concerns, and he attributed faculty morale problems to the lack of a collective bargaining agreement over so many years.

Murphy acknowledged that the college has “had bumps” in recent years.