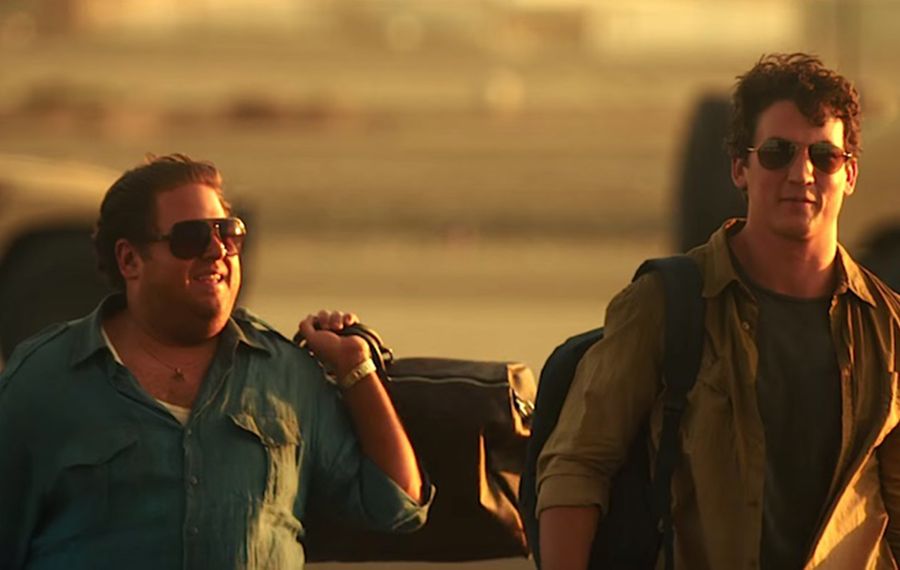 Jonah Hill is having a pretty good week. “Sausage Party,” on which he is credited as an executive producer and writer, was the No. 1 movie at the box office over the weekend. And now, after receiving Oscar nominations for “The Wolf of Wall Street” and “Moneyball” for his supporting roles alongside Leonardo DiCaprio and Brad Pitt, he takes center stage with a breakout lead performance in “War Dogs.”

The film is based on the story of two young Jewish stoners in Miami Beach who become arms dealers. The two were profiled in a 2011 Rolling Stone story and later in a book called “Arms and the Dudes” by Guy Lawson. The title refers to illicit arms traffickers, considered to be the bottom feeders of the industry.

“War Dogs” may be Hill’s movie, but it also brings Henry Hill of “Goodfellas” to mind.

Like Martin Scorcese’s 1990 classic, “War Dogs” is based on a true story, and effectively blends comedy, drama and violence. Both films are narrated by wet-behind-the-ears innocents quickly caught up in the allure of ill-gotten gains.

The Henry Hill role here is David Packouz (played by Miles Teller), a licensed massage therapist with a gorgeous Latina girlfriend and an entrepreneurial spirit. After losing all of his savings on a failed venture to supply nursing homes with luxury bedsheets, (“Would you wrap a lizard in cashmere?” asks one of the nursing home administrators), he goes into business with his childhood friend Efraim Diveroli, a fledgling arms dealer.

Teller (“Whiplash”) gives a nuanced portrayal as Packouz, who soon finds himself lying to his girlfriend (beautifully played by Cuban actress Ana de Armas). We see things through his eyes, as he tries to explain his actions and choices retrospectively. Although his character is more sympathetic than his partner, in the end his second thoughts seem more self-preservation than crisis of conscience.

But the real character of complexity and depth is Hill’s role as the semi-slimy Efraim, equal parts vulgarian, brashly brilliant entrepreneur, consummate and nearly compulsive liar, who is nevertheless likable in his own strangely twisted way. Like Packouz, the audience is simultaneously fascinated and appalled, but we cannot take our eyes off him.

Scenes are introduced with captions such as “God Bless Dick Cheney’s America” and “all the money is made between the lines.” The sight of these two naïve Jewish kids running guns through the wild “triangle of death” in war-torn Iraq are priceless, but the film is not really a war movie. Most of the pair’s work is done by laptop bidding on military contracts – it’s hardly glamorous.

“War Dogs” gives us an unflinching look at the military-industrial complex in the Bush years and could lead one to believe that “the system is rigged.” Its themes of “everybody does it” and “the government overpays for everything so we may a well get a piece of it” don’t exactly inspire warm patriotism. There is ultimately a reckoning for the war dogs, but several vocal audience members at the preview did not seem to think the punishment fit the crime.

Fittingly, the real Efraim Diveroli recently released his own account of these events “Once a Gun Runner” and is suing Warner Brothers, Phillips and Cooper. After he sees Hill’s raunchy portrayal, he may add him to that list.