John Tavares figured to be an absolute slam dunk for the National Lacrosse League Hall of Fame this year. And he was.

But he'll have some familiar company.

Former Buffalo Bandit teammate Tracey Kelusky will join him in the Class of 2016. In addition, veteran forward Josh Sanderson also was selected.

They will be inducted in the Hall of Fame Ceremony on Sept. 27 at the Toronto Rock Athletic Centre in Oakville, Ont.

Tavares was a unanimous choice for the Hall. Sanderson was picked by 77 percent of the voters, while Kelusky was chosen by 71 percent. Kelusky's number is below the 75 percent needed, but he did receive more than 75 percent of the votes from Hall of Fame members and thus qualified for induction.

“It’s an honor to be inducted into the NLL Hall of Fame,” Tavares said. “It feels great to be included in my first year of eligibility, but to get 100 percent of the vote is extra special.”

Kevin Finneran and Gavin Prout were the other two finalists.

Tavares spent 24 seasons in the NLL, a league record. He retired holding most of the NLL's major records, including games (306), goals, (815), assists (934) and points (1,749). He was the league's most valuable player three times, and won four championships.

Kelusky spent three seasons with the Bandits. Before that he played in Columbus, Calgary, Montreal and Philadelphia. Kelusky is a five-time All-Pro and retired with 383 goals and 823 points. His time in Buffalo was hampered by issues with concussions.

“It’s great to go in with Tracey,” Tavares said. “He played in Buffalo, and he was a competitor in Calgary and Columbus.

“It’s also great for Josh. I respect them both so much – their style of play, the way they carry themselves on the floor. They were leaders. I’m thrilled to go in with two great guys.”

Sanderson played 19 seasons in the NLL and won two champions. He finished with 1,357 points, and is a nine-time All-Pro. Sanderson won two titles.

It’s been quite a year of honors for Tavares, who is now an assistant coach with the Bandits. Earlier in 2016, he had his uniform number retired by the Bandits before a game. Tavares said it’s difficult to compare the two honors.

“The jersey retirement was special because it came within my own organization. That was a night I will remember forever,” he said. “That one was one where I celebrated with my fans, my family, and my friends. I got to share it with 18,000. With the Hall of Fame, Tracey and Josh are also involved, but it’s still the biggest honor the league gives out.”

Trio of lacrosse legends will be enshrined into the Class of 2016 at NLL Hall of Fame Ceremony on Sept. 27 in Toronto 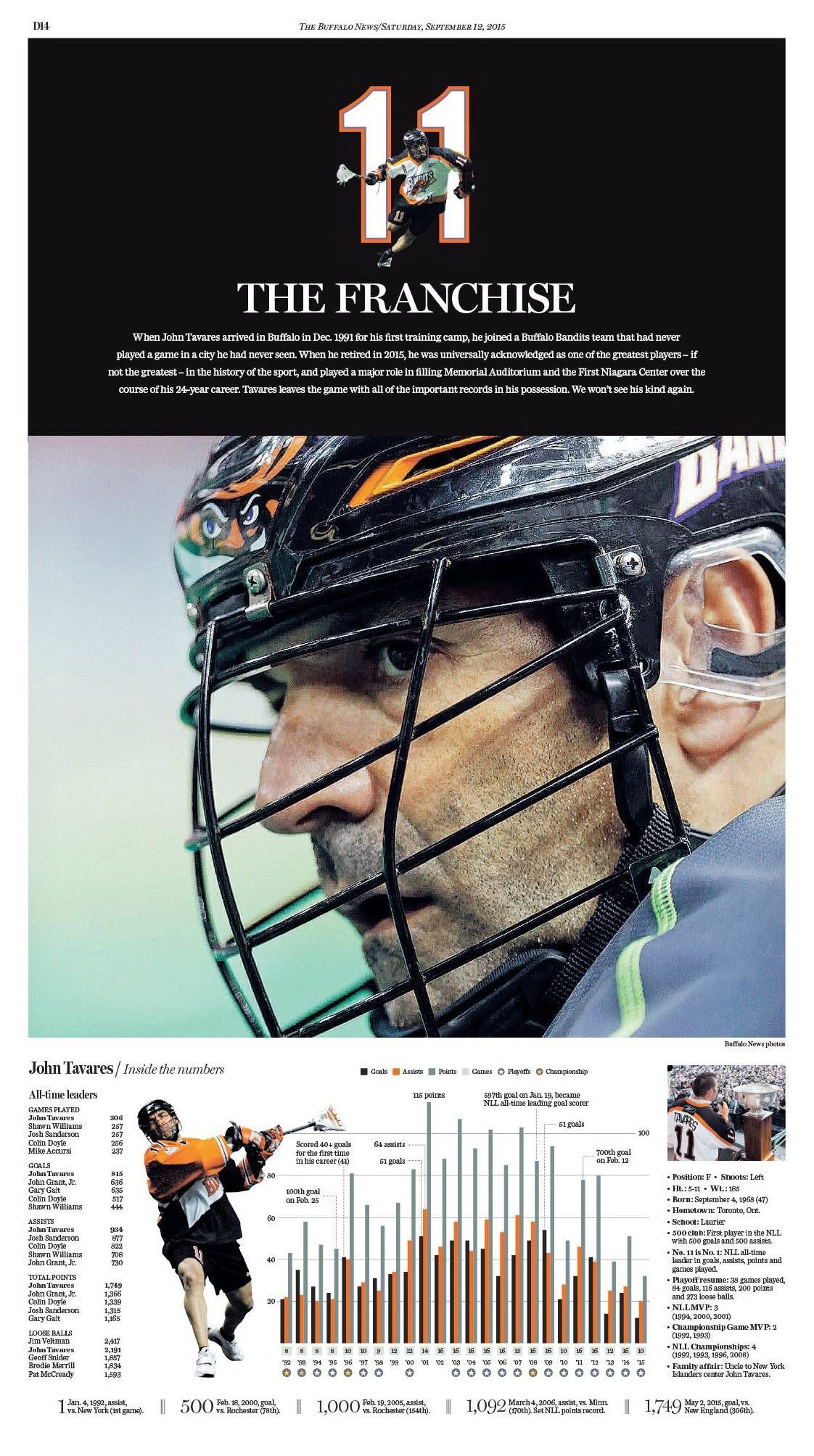 The Buffalo News paid tribute to Tavares' career in this Sept. 12, 2015 poster page.

The National Lacrosse League today announced Tracey Kelusky, Josh Sanderson and John Tavares have been voted into the NLL Hall of Fame as the Class of 2016. The trio of inductees, which marks the league's largest member class since 2010, will be enshrined at the NLL Hall of Fame Ceremony on Tuesday, Sept. 27 at Toronto Rock Athletic Centre in Oakville, Ont.

"It's really an incredible statement and testament to the staying power of our players and League when this outstanding trio get inducted into the National Lacrosse League Hall of Fame and all continue to work as executives in our League," said NLL Commissioner Nick Sakiewicz. "Tracey Kelusky, Josh Sanderson and John Tavares were all dynamic players on the floor, and they continue to serve the National Lacrosse League in their post-playing careers as coaches and team executives. It's an honor and very important to have former players find post-playing careers with our League and each of these men have made immeasurable contributions to the sport, and continue to do so in guiding the next generation of NLL players. It's fitting that each will now be forever immortalized in the NLL Hall of Fame."

The five finalists for the Class of 2016 were selected last month by the league’s Hall of Fame Committee. The other two finalists were Kevin Finneran and Gavin Prout, who automatically returned from last year's ballot.

The NLL Hall of Fame was established in 2006. The 24 current members are: