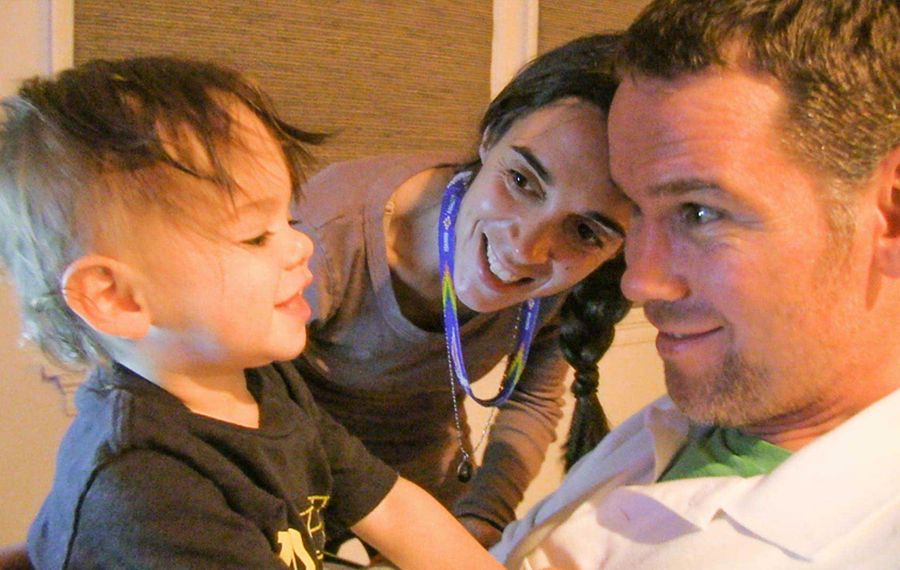 I waited until long after the end credits had rolled to jot down my thoughts on “Gleason,” the soaring and sometimes excruciating new documentary about retired NFL player Steve Gleason and his battle with ALS.

It’s the kind of movie that requires a little sit in the car and some soul-searching.

This years-in-the-making project is a jarringly intimate and life-affirming exception. The only way to describe the aesthetic of the film that floored audiences at Sundance is with that cliche, “fly on the wall.” Director Clay Tweel is with Gleason and his wife, Michel Varisco, in the doctor’s office for bad news; the bedroom as they can’t find any words to say; the hospital room before a risky surgery.

This level of access can almost feel intrusive, like spying on someone’s private moments, but ultimately creates a feeling of genuine empathy for the characters. The hardest part of watching “Gleason” is knowing what lies ahead.

When we meet Gleason, he’s a bronze-haired and beefy ball of optimism, still in NFL shape. The former New Orleans Saint — immortalized for blocking a punt that came to symbolize a city’s rebirth after Hurricane Katrina — is every bit the charismatic hero he’s made out to be. He seems more like a surfer dude than a world-class athlete, expounding his thoughts on life with a philosophical gravitas. He’s also a bit naive.

One of the most revealing scenes comes early when he’s doing a triathlon with a few athletic friends. They don’t know about his illness and playfully tease his uncharacteristic exhaustion. As Gleason slows to a jog, he feigns a smile, takes a couple of deep breaths.

His wife is more visibly impacted, stopping to wipe the tears. She’s only beginning to accept the reality that any spouse of an ALS victim will invariably face: This person will never be the same again.

In a movie rich with themes, one is what it truly means to say “in sickness and in health.” Without hesitation, Varisco drops everything to care for her husband before the symptoms begin — the gradual loss of speech, movement and, eventually, life. All of this is further complicated by her pregnancy, which they learned at about the same time as Gleason’s diagnosis. She emerges as a scene-stealing star, both for her tireless devotion as well as her blunt, expletive-laden takes on ALS.

Another major character is Gleason’s father, Mike. He’s a bit tougher to embrace, as it’s revealed that he was an often tough presence in his life, always pushing him harder in football. Additionally, he’s open about his becoming an ardent born-again Christian, and even takes Gleason and Varisco to one of those miracle healing sessions with a gesticulating pastor.

If “Gleason” has anything to say about society at large, it’s that there’s nothing cool or enviable about coping with a terminal illness. In the past few years, there have been a host of well-meaning and poetic films that have almost romanticized the subject, from “The Fault in Our Stars” to “Me and Earl and the Dying Girl.” But “Gleason” captures all the unsexy stuff — the hard decisions that need to be made before you die, and how you choose to spend your time.

What makes it so rousing is how Gleason handles his unthinkable circumstances. As much as we see him struggling, there’s an equal amount of time paid to his fierce persistence to do something in the face of death. After a surgery that leaves him wheelchair-bound and speaking through a computer, he develops the non-profit Team Gleason whose aim is to get ALS-afflicted people the right technology. He takes life into his own hands, like getting right with his father, going sky-diving and spending time with his son, Rivers.

The most time-consuming step on his bucket list is making tapes for Rivers to be played after he dies. These short confessionals are a way of marking time throughout the movie, following Gleason through the stages of the illness. Some of the most touching moments come in this time alone with the camera. They reveal a man who has accepted his reality and keeps fighting anyway.

It’s fitting that the documentary ends on one of his videos. “Gleason” is about more than illness, or dying, or marriage or the importance of fathers and sons — it’s about saying and doing all that you want with the time you’re given.

It will likely stick with you for hours afterward. Hopefully longer.