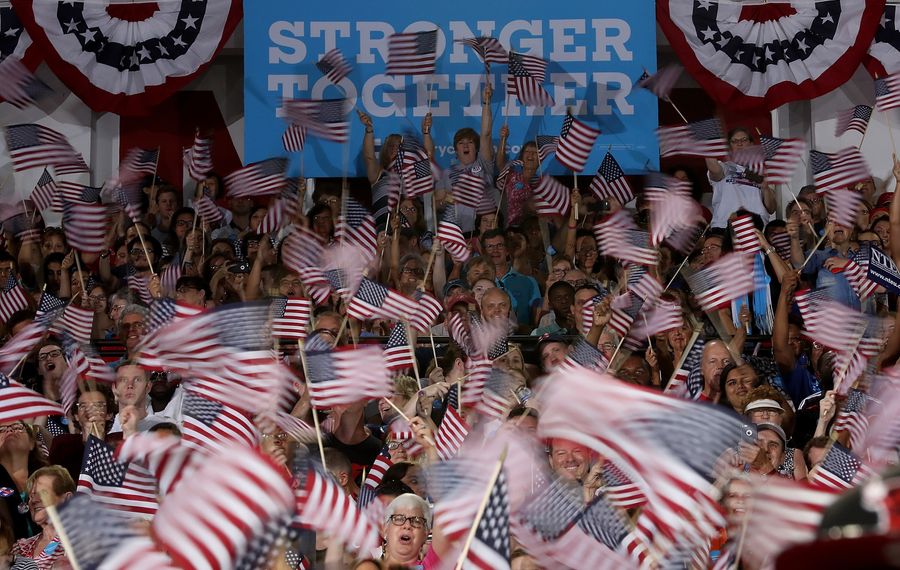 PHILADELPHIA – Barack Obama turned out to be wrong, very wrong. Twelve years after Obama appeared before a Democratic convention and said America isn’t black or white or red or blue, but one, the man and the woman who want to succeed him in the White House know better.

Donald Trump’s America is largely white and gray and, in political parlance, red. Call it disaffected America, a coalition of the disappointed: people who worked hard and played by the rules only to see the work go away and the rules broken, people who watch the news and see chaos creeping closer every day.

Hillary Clinton knows there’s no one America, too. Call her America diverse America. On the election night maps, it’s blue, but in reality, it’s black and brown and rainbow hued. Diverse America is troubled, too, but by different things: the power of money, the growing gap between rich and poor, the growing sense that guns so often end up in the hands of the wrong people, like madmen, or racist cops.

These two Americas, disaffected America and diverse America, will clash as much as Trump and Clinton will in the coming months as we careen toward the November election. But the next few months will be a bit more tolerable if we all recognize two common truths: that both Americas have legitimate grievances, and that neither side has a right to make up its own set of “facts.”

This election season’s early signs, though, are not good. Early signs show elements on both sides drifting toward delusion.

Let’s start, though, with the legitimate grievances, first on the right.

Times are especially tough for the older white men who don’t have a college degree who have flocked to Trump in droves.

They have every right to be angry that, according to the Federal Reserve, free trade with China has cost the nation 4 million manufacturing jobs.

They have every right to be angry at the fact that rule breakers, be they illegal immigrants or a secretary of state who sets up her own private email server, so often seem to go unpunished.

To hear Trump tell it, diversity – in the form of immigrant criminals and terrorists – is the danger. And the answer to this problem and challenge is: Trump. Nothing more and nothing less than Trump. Just Trump.

One reason to doubt that, though, is that it’s hard to find anyone who makes up his own sets of facts quite like Donald Trump.

Seventy percent of the Trump statements fact-checked by PolitiFact, the truth-telling website that’s affiliated with The Buffalo News, rank as mostly false or worse. (You will find the details here: http://www.politifact.com/personalities/donald-trump/.) Trump’s “pants-on-fire” lies include saying that unemployment may be as high as 42 percent (when it’s really about 5 percent) and saying crime is rising when it has been falling for decades until a recent blip upward in big cities.

Not surprisingly, one of the left’s greatest gripes is that Trump seems to be able to get away with saying such things – as do those who support him.

Antontio Sabato Jr., for example, used his Cleveland convention speech to revive the myth that Obama is Muslim, and several right-wing websites falsely charged that U.S. flags were absent from the Democratic convention.

The far right’s tendency to spread such untruths is just one of the left’s legitimate grievances.

Yes, the gap between rich and poor has been growing for years, and the lower and middle classes do increasingly bear inexplicable costs for everything from medical care to a college education.

Yes, race relations in America do appear to be reaching a tragic breaking point, and madmen with guns are only making matters worse.

And it’s true that women still often don’t receive equal pay for equal work, that gays can still be fired for being gay in many places, that Trump demonizes immigrants and refugees when in fact they’re part of the very idea of America.

But the left isn’t entitled to its friendly version of the truth, either – although, increasingly, it makes one up, too.

Clinton is by no means the Pinocchio that Trump is, but she’s no George Washington. Politifact’s Clinton file finds that her statements are at least mostly false 28 percent of the time.

And she’s had a few pants-on-fire whoppers over the years, too, such as her claim this year that she was the only candidate to promise she wouldn’t raise taxes on the middle class, and her 2008 classic about landing under sniper fire in Bosnia in 1996.

What’s equally disturbing, though, is that after years of watching the right concoct myths about Obama’s birth certificate and the Clintons’ supposed involvement in murders and so on and so forth, the far left, too, is coming to believe what it wants to believe.

Bernie Sanders supporters in Philadelphia and on the internet repeatedly charged that Clinton “stole” the California primary and that two-thirds of the Sanders vote in that state went uncounted. PolitiFact’s finding? Pants on fire.

And the following meme, supposedly said by Donald Trump in People magazine in 1998, has been circulating on social media for months:

“If I were to run, I’d run as a Republican. They’re the dumbest group of voters in the country. They believe anything on Fox News. I could lie and they’d still eat it up. I bet my numbers would be terrific.”

There’s no evidence that Trump ever said such a thing. Snopes, the rumor-debunking website, checked it out and found nothing.

So what’s a responsible citizen to do amid all this lying and rumor-mongering? Stop it. Just stop it.

Don’t share anything on Facebook or anywhere else that you don’t know to be true – and when in doubt, check it out. Just as the internet gives us all newfound power to spread lies, it gives us all the power to do a little reporting of our own.

Besides PolitiFact, FactCheck.org and the Washington Post Fact Checker do a good job telling truth to power, while Snopes squashes rumors as they come along. Check out these sites, and trust them more than you would trust anything you hear from Trump or Clinton or your loudmouth, right-wing uncle or the boisterous Bernie Bro in your family.

Granted, doing so won’t do much to unify a nation so riven along racial and cultural lines, but at least we can, one by one, stop making matters worse.

And if enough of us do that, perhaps sooner or later, disaffected America and diverse America will be able to agree on at least one thing: the truth.