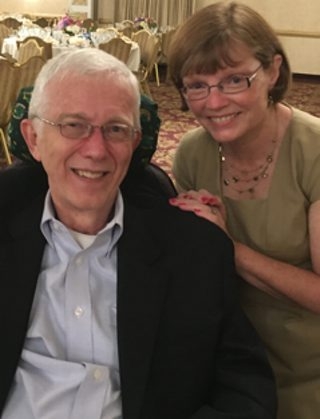 He was executive director of Fox Run retirement community in Orchard Park at the time, but Maloney had spent decades before working with seniors at spots than included Bristol Home, Niagara Lutheran , Brothers of Mercy and Canterbury Woods.

“He’s had a lot of experience dealing with illness,” said Maloney’s wife, Ellyn, “which on a humorous note means that he knows exactly what I’m supposed to do and he tells me how to do it.”

The Maloney family has found humor an elixir that helps them cope with Mike’s amyotrophic lateral sclerosis, also known as Lou Gehrig’s Disease, a progressive condition that attacks nerve cells in the brain and spinal cord. Treatment is limited and there is no known cure.

Maloney has been more fortunate than many struck with the disease. It hit him at 61, an age older than it strikes many of those afflicted. He also has retained his voice – which he has used advocate for greater awareness and more funding for research.

Related story: Mike Maloney channels his diagnosis toward a cure

Five women in his life are his not-so-secret weapons: his wife, his daughters – Jennifer Lambert, Marybeth Soeder and Colleen Griffith – and longtime family friend Maureen Myers, who has helped co-chair the Western New York Walk to Defeat ALS twice in the last three years.

This year’s walk takes place at 11 a.m. Sunday at Ralph Wilson Stadium. Afterward, the Maloney clan aims to figure largely in an attempt to break the world record of 882 people to do the Ice Bucket Challenge in person at the same time, a mark set China two years ago. Learn more about ice-water dumping challenge and ALS at webuny.alsa.org.

“The theme at their wedding was one word – joy,” said Myers, a retired parochial and Buffalo public school teacher who met the Maloney family 35 years ago during a parish feast day at the former St. James Catholic Church. 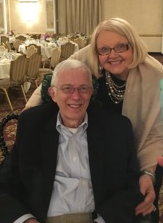 “Last year at the 40th anniversary,” Myers said, “the priest who married them celebrated Mass with them at their home and we celebrated with their family. Joy has permeated their entire lives and they have brought that joy through every piece of this ALS. Even when given such a diagnosis as this insidious disease, they have lived out that joy and we have all been so blessed with that. Their marriage and their family life, and the way that they have dealt with ALS, blesses every person they come into contact with.”

Myers has been an important part of Mike Maloney’s support team.

Ellyn Maloney is team leader, and talked this week about what it’s like to be the primary caregiver to the man she married 41 years ago.

“We’re coping with it, probably because his attitude is so positive,” said Ellyn, 64, whose first outing with her husband was a blind date to Studio Arena.

Q. What approach to life and addressing the disease have you and your husband taken since he was diagnosed?

When he was initially diagnosed, it was a very depressing and sad time, however I told him that we’re at Point A right now and eventually we’re going to get to a point in the alphabet that won’t be so great. We can choose to either live out our life from A to D or we can just stop living and wait to die. We made a conscious decision we would go about living life the best we could with him having ALS.

Over the last four years, we’ve been fortunate in that the disease didn’t take him the way it takes a lot of people – very quickly. He has the ability to continue to speak – and boss a lot of us around – and to still function, even though his body does not allow him to do everything he wants to do. His brain does.

Q. How has your life changed over the last four years?

I had been working full-time (in the regional IRS customer call center) but in November of 2015 he took a fall. At that point, I stopped working. I’ve gone from a desk job to being a caregiver. I’m doing some things I thought I never would be doing but I’m fortunate to be able to do them. I’m able to stay home and financially we’re able to manage on his retirement. We’re coping with it, probably because his attitude is so positive. It puts me in a position of perhaps sometimes being frustrated but looking at him and thinking, “If he could be doing what I’m doing for him, he certainly would be.”

It’s taken our relationship to a different level. We’ve always been very close and that’s very helpful. If you have a good marriage to start with, it’s a good foundation. We also have a faith-based relationship. I’m not going to say it’s not tough but together we seem to be doing OK. Definitely, life has changed – the focus is much different. The activities of daily living take up a lot of our time.

Q. Has his experience helped him to keep the attitude he has?

The same qualities that made him superb in his work are what is also making him superb in attacking this disease. A sense of humor is in the top five if not number one. He’s very organized. He knows what’s supposed to happen and how it should happen.

There’s a side to him that I wouldn’t admit if he was sitting next to me. He can be very gentle in his approach to the elderly. Maybe now, he’s seeing that in a different way, that ability to relate.

Q. What has surprised you most since your husband’s diagnosis?

We thought that when we would be home together that we might get bored and we’re not. We’re managing and he’s focused on fundraising for the ALS Foundation. We’ve gone to Washington to advocate for funding and research with our representatives on Capitol Hill. Although this is now our focus, we still travel and go places and talk about what’s happened and what needs to happen with this. He’s switched focus on being an advocate for the aged population to the ALS population. That’s a surprise. We might have thought we would just stay home and try to take care of him. We’ve gone outside of that circle.

Q. What has comforted you the most?

Family. Friends. The relationship that we have with our church, our God. We play off of each other and that sense of humor comes through a lot.

Q. What else has helped you cope?

Q. From the outside, this looks to be a heavy lift.

Both literally and figuratively, because Mike is pretty much confined to a motorized wheelchair. We have a lift to get him in and out of bed. That’s where the caregiving comes in. At least right now, for us, it’s not the main focus. We’re still doing all this other stuff.

Q. What do you wish more people understood about ALS?

I’d like there to be a better awareness of what the disease is because it’s different to so many people. Some people are affected where they’re not able to speak or swallow. Fortunately, my husband has the ability to speak and swallow and eat, but his limbs are affected and, even more importantly, his breathing is affected. It can affect people in different ways and there’s no cure. There’s only one treatment that extends life maybe just three months. At this point, we need more dollars so that research can be done and treatments or cures can be found. Perhaps some people see the Ice Bucket Challenge as goofy, a bad use of water in a drought situation, but it’s brought awareness to the fact that ALS exists, that it’s Lou Gehrig’s disease. We know what a pink ribbon means. We need something that shows what ALS is so that people will contribute and research will be done and pharmaceutical companies will try to make drugs to treat this, so that it becomes profitable to find the cures of this disease. The walk is to raise money but it’s also to raise awareness.

Q. Have inroads in research treatment and awareness come since the Ice Bucket Challenge was introduced?

The association is telling us there has been progress made, but it’s slow and it takes so much money just to get one drug on the market, but they definitely feel like the challenge has made an impact. If you go on the ALS website (alsa.org), you’ll see that there’s different projects in different parts of the country. Doctors that we go to are more positive. They’re seeing hope that there might be something in the next few years.

Q. How many members of the Maloney clan will not only do the walk but help try to break the Ice Bucket Challenge world record on Sunday?

Certainly our immediately family, with us, all the children, (their spouses) and nine grandchildren.

(According to Myers, “Usually on our team, we have way over 100 and we also do a satellite walk on Friday at Fox Run because the staff and the residents adored Mike as their executive director.”)

Q. When it comes to caregiving, who’s helping you out?

We’ve had a lot of support in terms of visitors. The actual caregiving, I’m taking care of much of it myself. Mike is under hospice care and they’ve been absolutely wonderful. He’s trying to be their longest living patient. He’s going on his second year. They send a nurse and a social worker and a massage therapist.

Q. Are you taking care of yourself and, if so, how?

I am. I’m fortunate that I don’t need to go out a lot. I take a walk every night for an hour with a neighbor I’ve been walking with since our kids were little. That’s kind of a therapeutic walk. We get the exercise but we also talk. I’m watching what I eat and am probably doing more exercise now than when I was working. I could see easily how you could not take care of yourself because you’re overburdened but I’m not there.