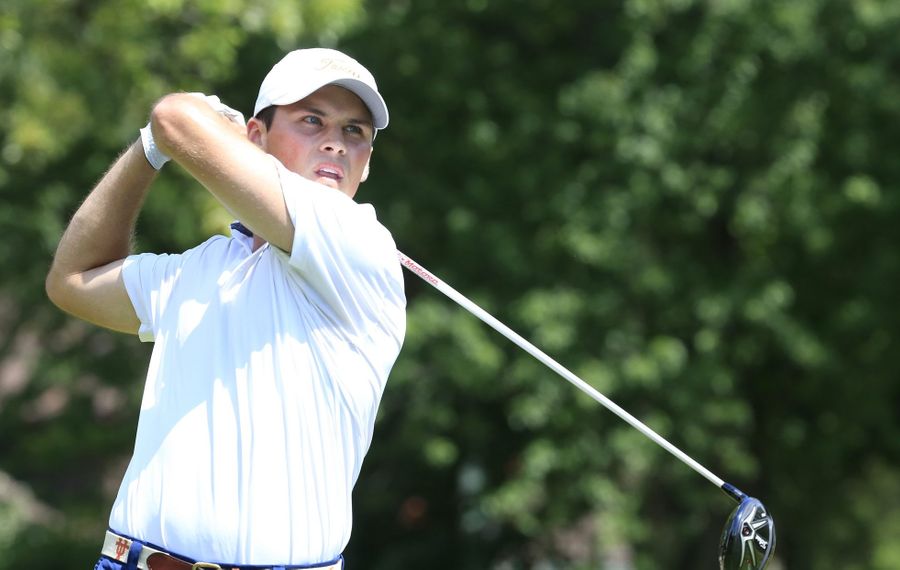 LEWISTON – It’s not quite a knockout yet, but Gavin Hall has the rest of the field on the ropes at the Porter Cup.

The 21-year-old from Pittsford continued his sublime play in the third round Friday at Niagara Falls Country Club, carding a 5-under 65 to hold a four-stroke lead over Australian Harrison Endycott.

“You can easily get caught up in playing the person next to you,” Hall said. “I’ve done that a few times, and today I just wanted to continue playing the golf course, see how many birdies I can make, and then see if it’s good enough.”

So far, it’s been more than enough.

Any time Hall has hit a rough patch in his round – and there haven’t been many – he’s recovered right away. He birdied all three par-5 holes Friday, and after dropping a shot at the par-3 16th, stuck an iron shot to 10 feet on the difficult, par-4 17th. When that right-to-left bender snuck in, his lead was four shots.

“I’ve learned a lot through some college events this spring and playing with the lead, and how to go about playing my type of game,” the University of Texas senior said. “That was really nice to have that birdie. Had a lot of great chances coming in. … I felt like I was pretty in control of my emotions and my game toward the back nine. It’s pretty fun playing this type of golf.”

Even some of Hall’s competitors found themselves marveling at his performance.

“He’s just playing great golf,” said Auburn senior Will Long. “You’ve got to try and play your best and shake his hand at the end of the day. It’s impressive what he’s doing.”

Hall closed out his round with a clutch up-and-down at the par-3 18th, sinking a ticklish 10-footer for par.

“I felt like I hit a good chip down there, and hit a great putt to close,” Hall said. “You want to finish with par or birdie on the last.”

If Hall can really turn it up Saturday, the tournament record of 22-under-par set by Brian Harman in 2008 could be in sight. Don’t expect him to take his foot off the gas pedal.

“I tried playing pretty conservative on the par-3 12, and I hit it in the bunker,” Hall said. “That’s not the type of game I normally play. If I stay aggressive, firing at pins, the greens are soft enough where they’re holding. I’m driving the ball well. I can make plenty of birdies out here, and that’s what you need to do, because too many guys, you see guys can shoot 61, 62 in the last round and sneak up on the lead.”

In the hunt: Endycott stayed within shouting distance of Hall thanks to a 4-under 66. He played the first eight holes 1-over, but closed the front nine with a birdie at the difficult ninth, then ripped off three straight birdies from No. 11 through No. 13.

“Today was a bit of a grind,” Endycott said. “I wasn’t really happy with the way I was driving the ball. It was probably the worst I’ve driven the ball all week. It was nice to make a birdie at No. 9 to turn even and try and flip my scorecard that way.”

Endycott said he accomplished his goal of at least giving Hall something to think about.

“That was really the job I had to do today considering how well Gavin is playing,” he said. “If I didn’t stay in it and try and knuckle down and stay patient, I was going to be out of the tournament because he’s playing so well. So it was just one of those things you had to take one shot at a time and stay patient. I managed to do a good job of that on the back nine.”

Hot start: Long, a 21-year-old from Gastonia, N.C., birdied five of the first six holes in shooting a front-nine 30.

“The putter was extremely hot,” he said. “I’m pretty sure I had seven straight one-putts to start out the day. I made a bomb on No. 1. I hit a lot of shots in there tight. Just had it rolling, honestly. It was a ton of fun.”

Long, who is tied for fourth at 5-under, added two more birdies on the back nine to reach 7-under on the round, but made a mistake when he hit his drive on the par-4 14th out of bounds to the left, leading to a bogey.

“There’s no grass over there and it barely kicked out of bounds,” he said. “It was a bad swing. I’m going to go work on it now and straighten it out for tomorrow and hopefully get it going again.”

Follow the leaders: The third member of the last group Saturday will be 26-year-old mid-amateur Justin Tereshko of Jamestown, N.C. He’s played the par-5s in 6-under over the last two rounds, accounting for his overall score through 54 holes.

“If you would have told me a week ago that I would be playing in the final group on Saturday, I mean, where do I sign?” he said. “Hall’s obviously going to have to come back a little bit for me to have a chance, because I don’t know what the course record is.”

Informed it was 60, set by Bill Haas, Tereshko quickly shot back: “I’m not Bill Haas.”

Boss shot a round of 70 Friday.

“It was OK,” Boss said. “I could have scored a lot better. I had a couple bad bogeys on the back nine that shouldn’t have happened. I really rolled the ball. I was putting well today. I actually hit a lot of really good shots. I feel like I played better than my score reflected.”

Boss said the pins Friday were more accessible than the first two rounds.

“It was gettable today,” he said. “A little easier than the past two days, I thought.”

Boss is currently 2-over for the tournament, in a tie for 34th. The goal for Saturday’s final round?

“Get it in red numbers,” he said. “I’m 2-over for the tournament, so 67, I’m under par. I can do that. Make some birdies tomorrow and minimize the mistakes.”

Even though he’s just 23, Boss is playing in his sixth Porter Cup. He’s got a career-low round of 66 in tournament play, and 65 outside the Porter Cup. The recent graduate of Flagler College in St. Augustine, Fla., finished fourth in the 2016 Peach Belt Conference Championship. He recently qualified for the U.S. Amateur, but hasn’t played in many other tournaments this year.

“So it’s nice to be playing decently well here,” he said.

Schedule: The final round begins at 8 a.m. Saturday, with the leaders scheduled to tee of at 12:20 p.m. Admission is free. Parking is available off Military Road, with a small fee collected for the Boy Scouts.