When Syfy channel debuted “Sharknado” on a Thursday night in 2013 it was quietly, without the fanfare that often surrounds premieres.

But within minutes, the TV movie started making noise on Twitter. A “Sharknado” social media firestorm found everyone from A-listers in Hollywood to B-movie fans in Buffalo tweeting about the film at a rate of up to 5,000 tweets per minute. By the next morning, “Sharknado” was watercooler fodder and birthing a pop-culture phenomenon that would include a film franchise and an entire week of programming named after it.

The original “Sharknado” introduced us to Fin Shephard (Ian Ziering) and his estranged wife, April (Tara Reid). Fin, a former surfer-turned-bar owner is on the frontlines of an unprecedented natural disaster when a waterspout rains down sharks across Los Angeles. He spends the film trying to reach and then protect his family.

The action moves to New York City for “Sharknado 2: The Second One,” where Fin and April are on a book tour for “How to Survive a Sharknado.” Good thing they brought copies with them – they’ll need it. 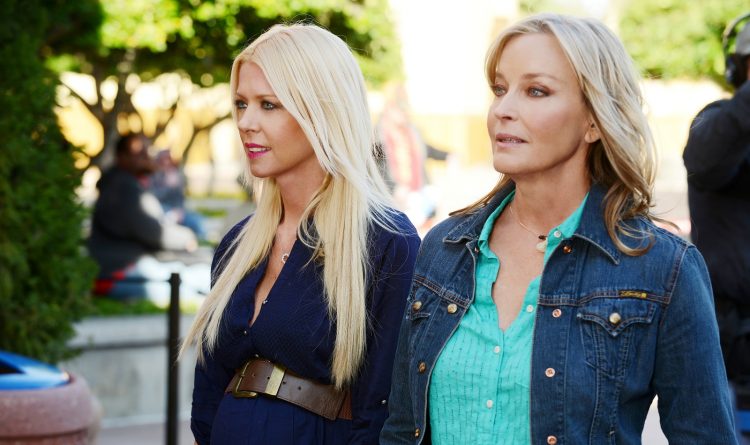 Tara Reid as April Wexler, Bo Derek as her mother, May, find danger in Orlando in "Sharknado 3: Oh Hell No." (Photo by: Gene Page/Syfy)

One location isn’t enough for “Sharknado 3: Oh Hell No!” as the action moves through Washington, D.C., Orlando and even space.

At 8 p.m. Sunday, Syfy’s annual “Sharknado Week” culminates with the premiere of “Sharknado The 4th Awakens.” It picks up five years later with Fin trying to lead a quiet life but getting pulled into yet another deadly sharknado.

So more than 3 billion tweets later, as we wait to see what fate has in store for Fin and his family this time, here are five reasons why the “Sharknado” films are awesome.

The title: Sharknado. The dual-purpose name is silly yet practical. Try and say sharknado without smirking. Or outright laughing. You can’t – and that’s the point. It’s a goofy name that succinctly tells you what you are about to see: a tornado with sharks. It’s also in the grand tradition of Syfy creatures like sharktopus, piranhaconda, dinoshark and pteracuda and for that we’re grateful. 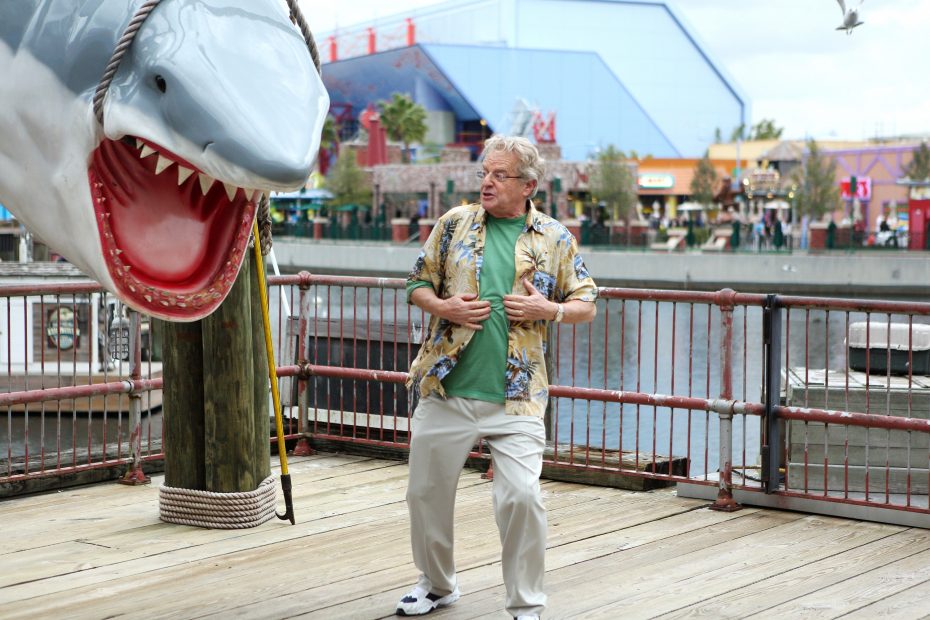 Jerry Springer made a cameo in "Sharknado 3: Oh Hell No!" (Photo by: Raymond Liu/Syfy)

The cameos: Celebrities have campaigned to get a cameo in one of these films, going so far as to ask to be a shark victim. The list is massive with 30 to 50 cameos a film from all walks of celebritydom: Kelly Ripa, Michael Strahan, ex-Buffalo Bill Marcellus Wiley, Kelly Osbourne, Chris Jericho, Judah Friedlander, Biz Markie, Jerry Springer, Robert Klein, Richard Kind (and his baseball bat), Ne-Yo, Anthony Weiner, Rick Fox, Penn Jillete. Some favorites: Kathie Lee Gifford and Hoda Kotb fighting off sharks with broken wine glasses; Mark Cuban playing POTUS (“They used to call me a shark”); and the various weather reports by Al Roker (“It’s a twister with teeth.”). For the new movie, look for members of Rascal Flatts, Slipknot, “Dancing With the Stars” and the Chippendales.

Jumping the shark moments: These films proudly jump the shark repeatedly. (Giving birth inside a shark, anyone?) But that’s not enough. Fin literally jumps over multiple sharks in a version of the arcade/video game Frogger in the second film.

Pop-culture adoration: It’s not unusual for pop-culture references to litter TV and movies today, but the “Sharknado” films were made by guys who are film geeks and it shows. The “Jaws” references are to be expected, but then there’s clever casting with Robert Hayes (“Airplane!”) as a pilot, Judd Hirsch (“Taxi”) as a cabbie and Lou Ferrigno (“The Hulk”) as a secret service agent spouting “Don’t make me angry.” There’s an important nod to Ash and “The Evil Dead.” And that lightsaber-chainsaw has to return in “The 4th Awakens?” Finally, let’s not forget those awesome mini-movies opening the second and third film. “Sharknado 2” starts with a homage to the famous “Twilight Zone” episode “Nightmare at 20,000 Feet” with sharks on the airplane wing. A 13-minute action-packed ode to “White House Down” opens “Sharknado 3.”

Make ‘em laugh: Finally, film snobs should chill out. The name should clue you in that these films aren’t meant to be taken seriously. If you are, you’re missing the point - and all the fun. Sit back, relax and stop yourself from saying “that couldn’t happen.” It can in the world of “Sharknado” where we embraced the fact that a man could be swallowed whole by a shark and then save himself with a chainsaw.