As a kid, Ben Madoff was determined to learn to cartwheel.

The moment felt right one night when his parents went out. He didn’t care how long it took – he was going to nail it.

Instead, he smashed his head into a piano bench.

See a list of free summer acroyoga classes below

As the blood gushed, he thought, “Maybe I’m not meant to go upside down.”

Acroyoga changed that. Discovering this yoga-acrobatics fusion exposed his buried desire to fly. His excitement led to more organized practices, which led to new interest, which led to a burgeoning Buffalo acroyoga community, which is offering three free classes this summer.

From afar, the boundary-pushing practice looks intimidating and rather uncomfortable. A closer look reveals a safe type of fitness that can be done anywhere. 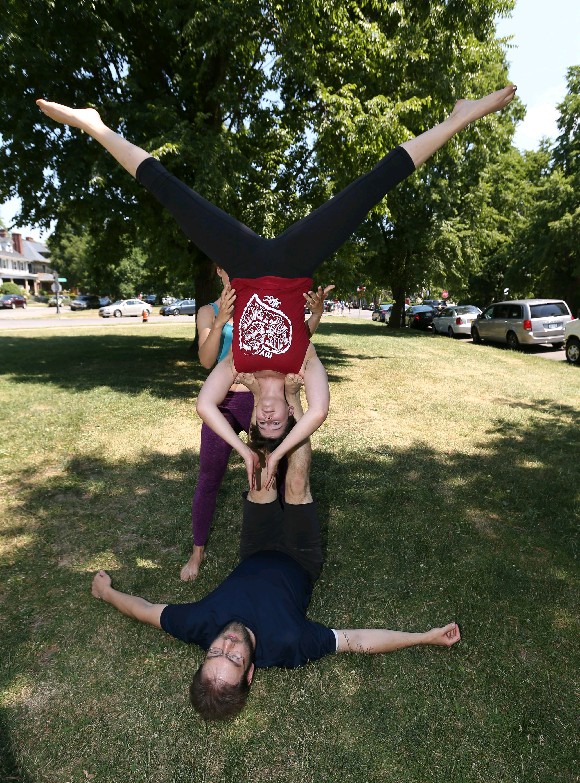 STRADDLE BAT: Ben Madoff and Emilee Philips show off several movements, the first in which the flyer rests in an inverted straddle position as the base supports his or her shoulders by the feet. They lock hands for more support.

Maybe you caught yourself staring at a person in an upside-down straddle – called a straddle bat – at Bidwell Park. Or you drove past the Monday night circus at the Delaware Park Rose Garden, where you saw someone casually walk between swirling hula hoops, twirling poi sticks and wobbling slacklines – with a person standing upright on his or her shoulders.

Through their smiles, they’ll tell you they’re playing. Then, they’ll explain that their circuslike tricks are poses in acroyoga, a literal elevation of yoga that incorporates acrobatics, as well as healing arts. It requires a partner and, most importantly, trust and communication.

Madoff, 35, was drawn to the practice a few years back when he learned the basics from a former trapeze artist at a circus skill show put on by his Elmwood housing cooperative.

In the beginning, he only wanted to be a base: the person lying down and elevating the partner, called the flyer. A third person, the spotter, hovers to ensure both the base and flyer are safe.

A long time has passed since Madoff’s failed cartwheel, but he understands the initial fear of going upside down. Still, he aims to share the thrill of flying. His can-do attitude and welcoming demeanor set the tone for what Buffalo acroyoga can become.

AcroYoga International was founded by Jason Nemer and Jenny Sauer-Klein on the West Coast in 2003. Three years later, the duo became the first to formalize the practice. Though acroyoga had a few followers in Buffalo, it didn’t catch much attention until about three-and-a-half years ago, when Madoff took over the fans’ inactive Facebook page in his quest to not only find acro partners, but also foster a community.

It started slowly. Madoff and just one or two people learned beginner poses from YouTube videos and soon experimented with balancing on one another’s hands, legs and feet.

Madoff is now one of several more advanced acroyogis who teach classes and help others in their practice. He took on the role of organizer, and sends Facebook invitations to promote coming events. The public Facebook group AcroYoga Buffalo has more than 1,000 members. You can find it through acro-wny.org. The group – made up of past, present and drop-in participants – has its regulars, and members frequently post to find others available to practice throughout the week. 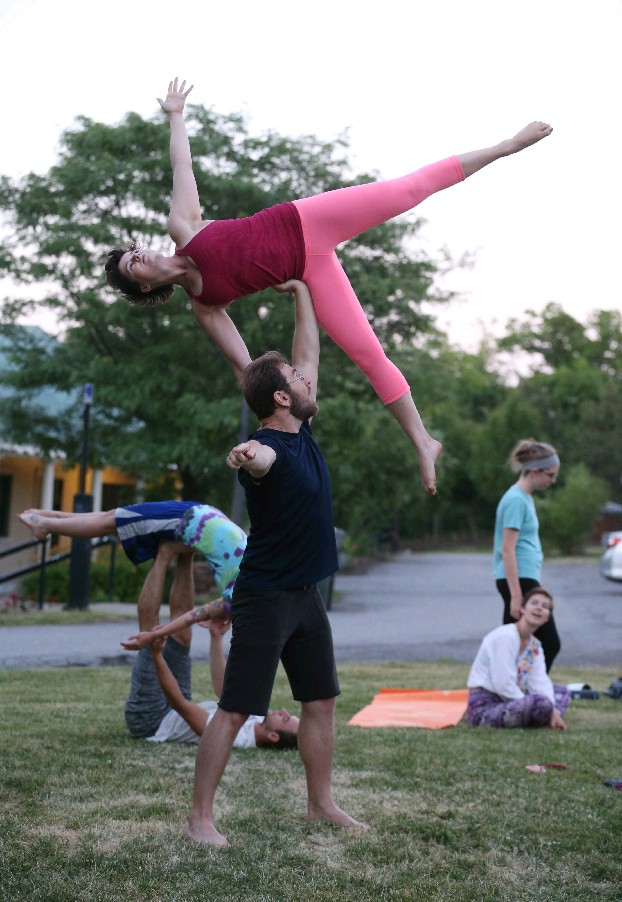 HIGH STAR: The base elevates the flyer horizontally using one arm. The base’s hand is on the flyer’s hip. The flyer places one hand on the base’s shoulder and another straight up. The flyer’s legs are in straddle, creating a star shape.

On a recent Monday evening in the Delaware Park Rose Garden – under the watchful eye of a young, bronzed Abraham Lincoln – an Acrojam! was in full swing.

The grass crunched under Juliana Burkhart’s feet as she hopped out of a pose and walked over to spot a group wobbling in a thigh stand pose. The 26-year-old from Williamsville has been coming to the weekly jams for about three years, and now she helps facilitate.

Acrojam!, which starts at 6:30 p.m. with a warmup and the occasional ice breaker, is informal, free and open to the public. It can be playful and casual, or more oriented around practice for a coming acroyoga performance.

Barefoot participants in colorful workout wear tend to break off in groups, find a grassy spot or blanket, and practice poses and flows based on their skill level. Many met that Monday for the first time. Burkhart said she loves to come Mondays because all the activity draws passers-by who spontaneously jump in.

“People try it for the first time and are like, ‘Wow, I can’t believe that I can do this. I want to learn more. If that was easy, what more can I do?’ ” she said. “We just want them to come back and do acro with us every day.”

Acroyoga can be practiced anywhere, but you can usually find a group of acroyogis practicing Saturday mornings at Bidwell Park. For more structure, Madoff and a few other acroyogis also teach a free class at 7 p.m. every Friday through August at Canalside.

Throughout the year there are classes at local studios. Although it’s a partner-based practice, you don’t need to come with a partner.

Big men aren’t limited to the base position, just as smaller women don’t have to fly. Participants also range in age. Glenn Murray, a 60-year-old event and portrait photographer, took photos of acroyoga for about a year until the regulars encouraged him to try it. Now he’s a regular.

“I often say I’m living proof that you can teach an old dog new tricks,” he said. “If I miss acroyoga for more than a week, I miss not only the exercise, not only the fun of acroyoga, but I miss my acroyoga friends.” 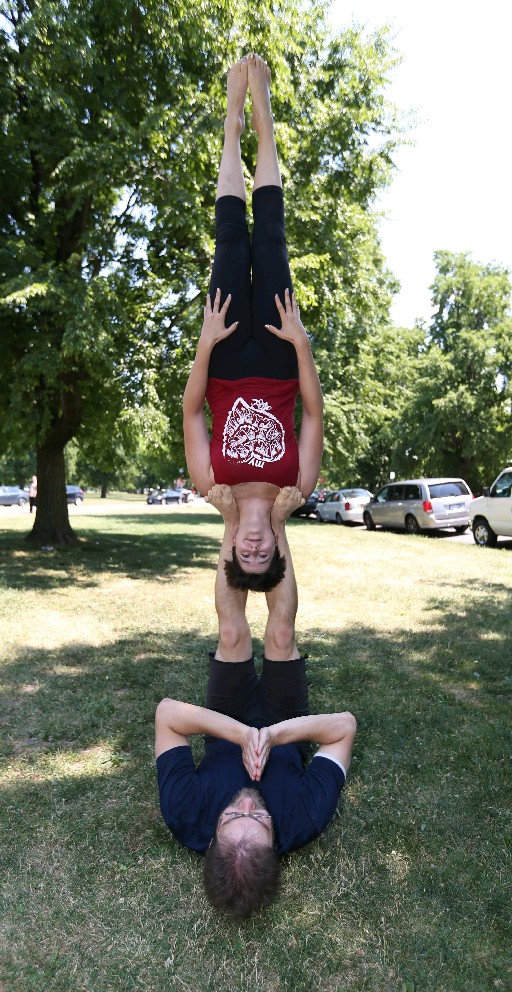 NEEDLE: The base uses his or her feet to support the flyer’s shoulders. The flyer balances while inverted vertically. It looks like an upside-down handstand, although the hands remain by the side.

Some who try acroyoga catch on more easily than others. For most, the idea of balancing on a stranger’s feet is daunting.

The person in the base position lies with his or her back on the ground so the arms and legs can be stacked to support the flyer. Typically the base places the feet on the flyer’s hips, groin or lower abdomen, or uses the hands to hold the shoulders or form handholds.

Trust is one of the main concepts of acroyoga, Burkhart said.

“You want to be safe, and not just because physically you don’t want someone to drop you, but you also want to be safe from an emotional standpoint,” she said.

“Like, you want to feel a sense of being able to be close to someone and intimate with someone without it being uncomfortable, without there being sexual tension where it doesn’t belong.”

It could easily be an awkward, scary experience, but acroyoga challenges typical social-physical barriers, from trusting to touching a stranger.

When Caputi and her sister attended an Acrojam! about a year and a half ago, they didn’t know anyone. Practicing regularly mended their once rocky relationship, and now they live together. Through acroyoga, Caputi said she connected with people who helped her during a particularly rough time in her life. Some of her closest friendships have been made through her practice.

“I don’t know if these are the type of people who are drawn to acro or acro does it to you, but it’s definitely a loving community,” she said. “It’s like a family.”

Whether you’re new to acroyoga or a veteran, the people around are there for your well-being. There will be a spotter by your side to make sure you won’t fall, and if you do, they’ll be there to catch you.

ARE THERE DIFFERENT TYPES?

Sometimes you’ll find acroyogis showing off fancy, complex maneuvers and continuous flow of movements that make up the solar acroyoga side.

Just as important is the lunar side, which focuses on massage, stretching, comfort and recovery. The more restful poses, like in yoga, make you more aware of how your body is feeling.

“We want to make sure everybody gets something out of the class,” Burkhart said. However, honest self-assessment is key, she said, because “if you get hurt, you can’t do acro anymore.”

WHAT WILL I GAIN?

Anyone can try acroyoga, Madoff said. Acroyoga develops core strength and balance, he said, and while some people come in with it, many others learn it through practice.

“If you’re shy and hesitant about it, a lot of times it pushes those boundaries for you, pushes those hesitations you may have,” she said.

Emilee Philips, a 27-year-old yoga instructor, said practicing acroyoga has made her a better communicator. When you’re upside down, it’s easy to see where you’re miscommunicating.

It has also taught her where she was still weak, like when she was being judgemental or close-minded.

“They also show me where I’m strong,” she said, laughing. “They’re just so much fun and supportive.”

For Burkhart, acroyoga has given her a more positive outlook on life.

“It sounds weird,” she said. “How can gymnastics and playing outside do that? But I think it’s taught me to be more patient with people, and it’s taught me to love people who are different from me because we can find common ground.”

She sees acroyoga as a community activity and a group effort rather than individual accomplishment.

“Seeing somebody be amazed at something they didn’t know they could do,” Burkhart said, “is a really good feeling.” 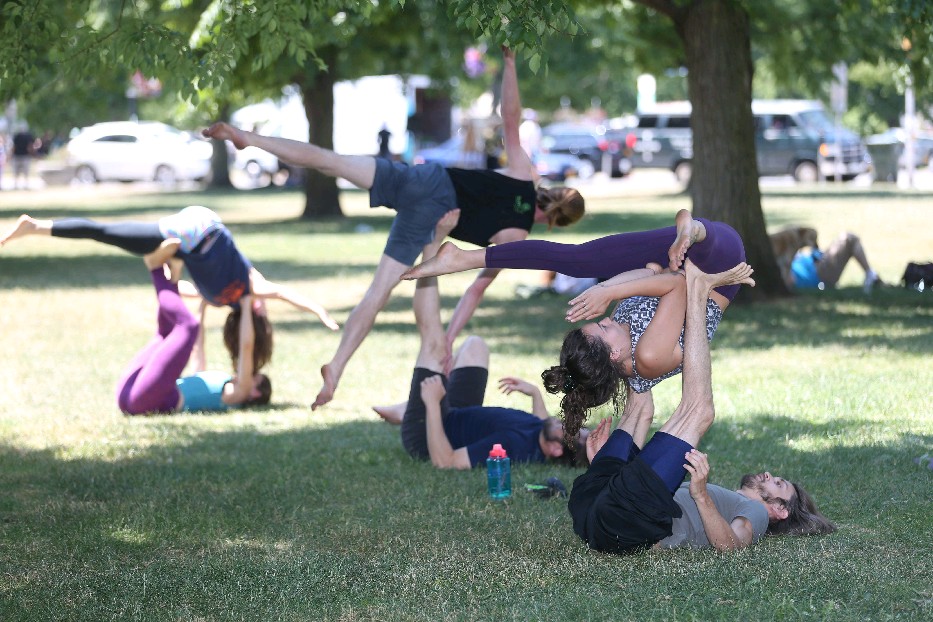 Bidwell Park is among the spots with free acroyoga classes this summer.

Market Arcade: HEAL Bflo and EXPO Market: Present a free happy hour yoga from 6:30 to 7:45 p.m. Mondays at 617 Main St.; the class will continue in the fall.

Templeton Landing: HEAL Bflo will host free classes at 11 a.m. Aug. 7 and Sept. 4 on the rooftop patio at 2 Templeton Terrace near Erie Basin Marina. Register in advance at Healbflo.com.

Bidwell Park: Preplanned gatherings take place here and elsewhere in Buffalo. Find out more at the AcroYoga Buffalo Facebook page, which you can find through acro-wny.org.