But in their Tehel Cup semifinal, fellow premier division side Clarence Yotes came equipped with a smart plan and executed clinically, knocking out Raiders by a 4-2 score on Thursday night at Niagara University.

"Any time you play Raiders, you have to get up for it, and any time you win, you hold onto it," said Clarence defender A.C. LaFlore after the match. "It's something special."

With the win, the Yotes advance to the Tehel Cup final against the winner of the other semifinal between Rogue FC and Celtic United.

"We know [Raiders] are a possession team and they have a lot of talented guys, but we had to use our speed and our counter attack -- kind of make a shell -- and then find our opportunities," Hughes said after the match.

The Yotes caught Raiders flat-footed from the first whistle, as Conte stole the ball near midfield, skipped past a Kyle Rogers challenge, stutter-stepped at the end line before turning the corner and ripping a shot off BSC goalie Will Boerema from a tight angle. 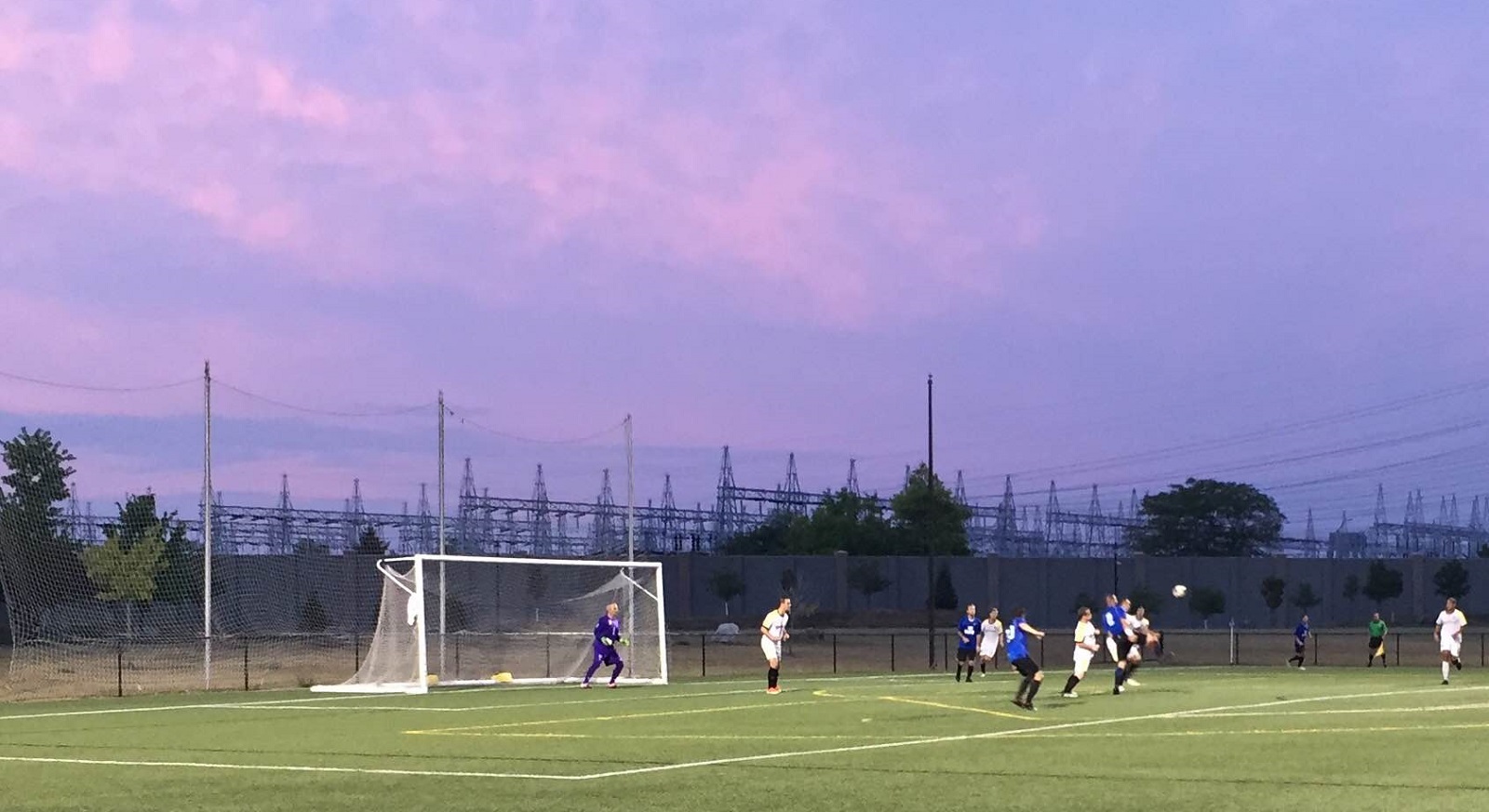 Despite finding themselves in a hole in the third minute, Raiders equalized four minutes later on a missile from Ryan Walter on the right side -- unclear if it was an intended shot or a mishit cross -- but regardless, the ball stung the left upper-90 of Len Previte's net.

Raiders rode the momentum to a 22nd-minute headed goal from Tony Mermigas, who was the beneficiary of Kyle Rogers' nifty run and service from his left back position.

BSC hit the crossbar twice during this period of the match -- once on a 20-yard strike from John Grabowski and another off Kendell McFayden's bouncing header, which Previte got the slightest of touches on -- and Clarence's good fortune soon rolled into another tie score.

[Read: Scores and sums for the BDSL, league-wide, in Week 11]

Clarence's Tyler Hamill sprung a counter attack, playing a low ball forward in Hughes' direction. Taking advantage of a tentative step to the ball by a Raiders defender, the former Canisius College midfielder darted in front and raced toward Boerema on a partial breakaway, toeing the ball high when the keeper came out to contest. The ball caromed off Boerema's hands toward the gaping goal, nicking the post before trickling across the goal line.

A clever set piece five minutes before the halftime whistle put Clarence in front, as Andrea Conte sprinted forward along the left sideline to receive a short pass off a quick corner kick, providing him with plenty of time to curl a picture-perfect in-swinging cross to the back post that met the head of Brendan Brody, who pounded it low past Boerema. 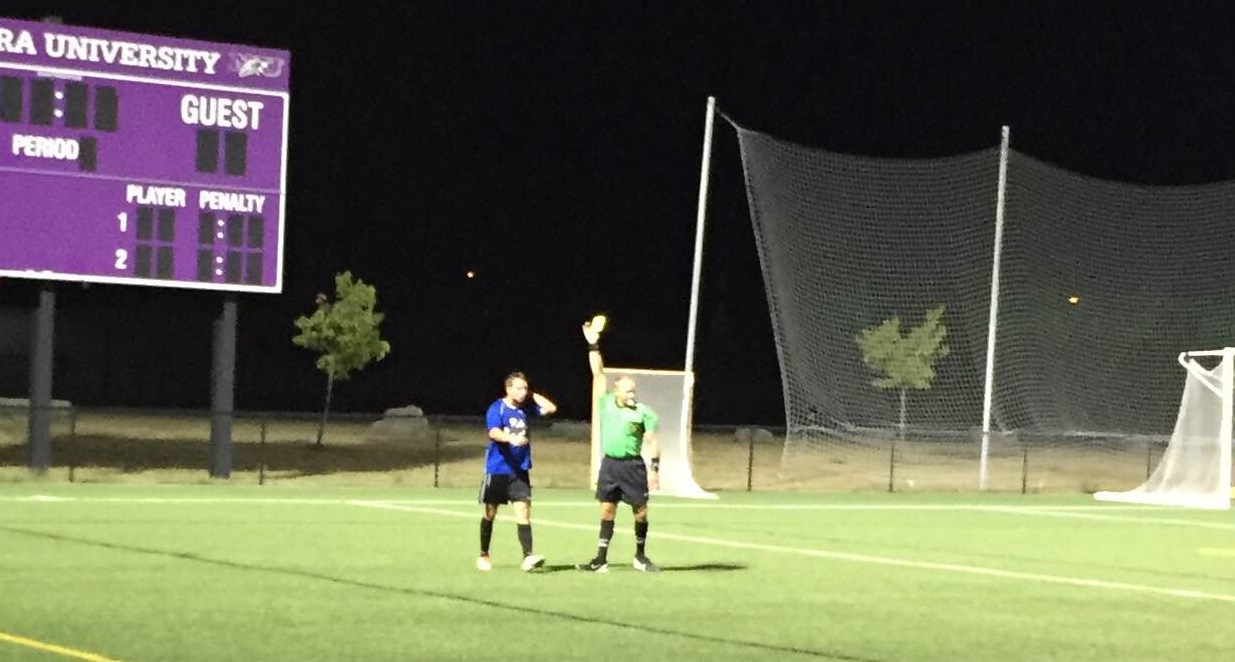 Raiders' Chris Walter is shown a yellow card for an errant slide tackle in the second half. (Ben Tsujimoto/Buffalo News)

Although the Yotes were absorbing a decent amount of pressure into the second half, Hamill capitalized on a Ryan Walter turnover to accelerate down the left side and nudge an outside-of-the-foot pass to Maier, who careened in unmarked and smacked a high shot first-time past a startled Boerema.

McFayden would hit the crossbar again in the second half, but strong defending from Clarence's contingent of Ryan Schroen, A.C. LaFlore, Chris Cournan, Aaron Zelko and Brody -- back-boned by solid goalkeeping from Previte -- held Raiders off the score sheet for the match's final 68 minutes.

"We had to make sure we had second defenders back there, forcing [McFayden] one way and not diving in [on challenges]," LaFlore said of Clarence's approach to marking McFayden, who's scored 20 goals across all competitions and plays for FC Buffalo. "I had one foul on him early, but after that, we just shaped him and let him go wide."

HE SAID IT: A.C. LaFlore, on why he made the switch from Sharpshooters to Clarence. "This is why I came to this team -- to defend with [Schroen], my brother in arms back there." Schroen and LaFlore were longtime center-back partners with Canisius College under head coach Dermot McGrane.

HISTORY LESSON: Clarence return to the Tehel Cup final for the first time since 2010, when they knocked off Raiders in the final, 1-0. The Yotes lost to eventual champion FC Yemen in last year's quarterfinals.

INJURY WORRY: In the win, Clarence suffered two potentially troublesome injuries. Conte had to be helped off after suffering a hamstring injury mid-second half, while Andrew Incho took a knock late and hobbled off on his own. The Yotes face Yemen Elite in the BDSL premier division quarterfinals at 6 p.m. Sunday.

Email Ben Tsujimoto, who would be excited by weather prospects if he were a sailor, at btsujimoto@buffnews.com