PHILADELPHIA – Democrats, if they could, might just as well add a new line to “The New Colossus,” the classic poem by Emma Lazarus that’s found on the Statue of Liberty.

After the passage that goes “Give me your tired, your poor, your huddled masses yearning to be free,” the Democratic addendum would be: “Give us anybody who has been insulted by Donald Trump.”

Trump’s attacks on Hispanics. Muslims and people with disabilities and so on and so forth may have won him the television time he so seems to crave, but it’s clear that Democrats are working to make sure it costs him votes.

Proof can be found in every one of the four days of the Democratic National Convention, which, in the undercard beneath the big-name speakers, you will find one speaker after another who serves as living proof that Democrats, unlike Trump, embrace diversity.

The typical appeal goes like this. A speaker from one minority group or another – such as Rep. Joaquin Castro of Texas on Thursday night – delivers a sly and subtle attack that turns Trump’s words against him.

For example, Castro told the story of how his grandmother arrived from Mexico as a 6-year-old orphan.

“She wasn’t a rapist or murderer,” Castro said, trampling all over Trump’s contention that Mexican immigrants are indeed just that.

From there, Castro portrayed Mexican-Americans as part of a great mosaic that makes a great nation that’s now under threat by a demagogue.

But there’s one thing the marginalized can do about it, Castro said.

“Go to IWillVote.com,” he told the crowd and the television audience, steering them to a website sponsored by the Democratic National Committee. 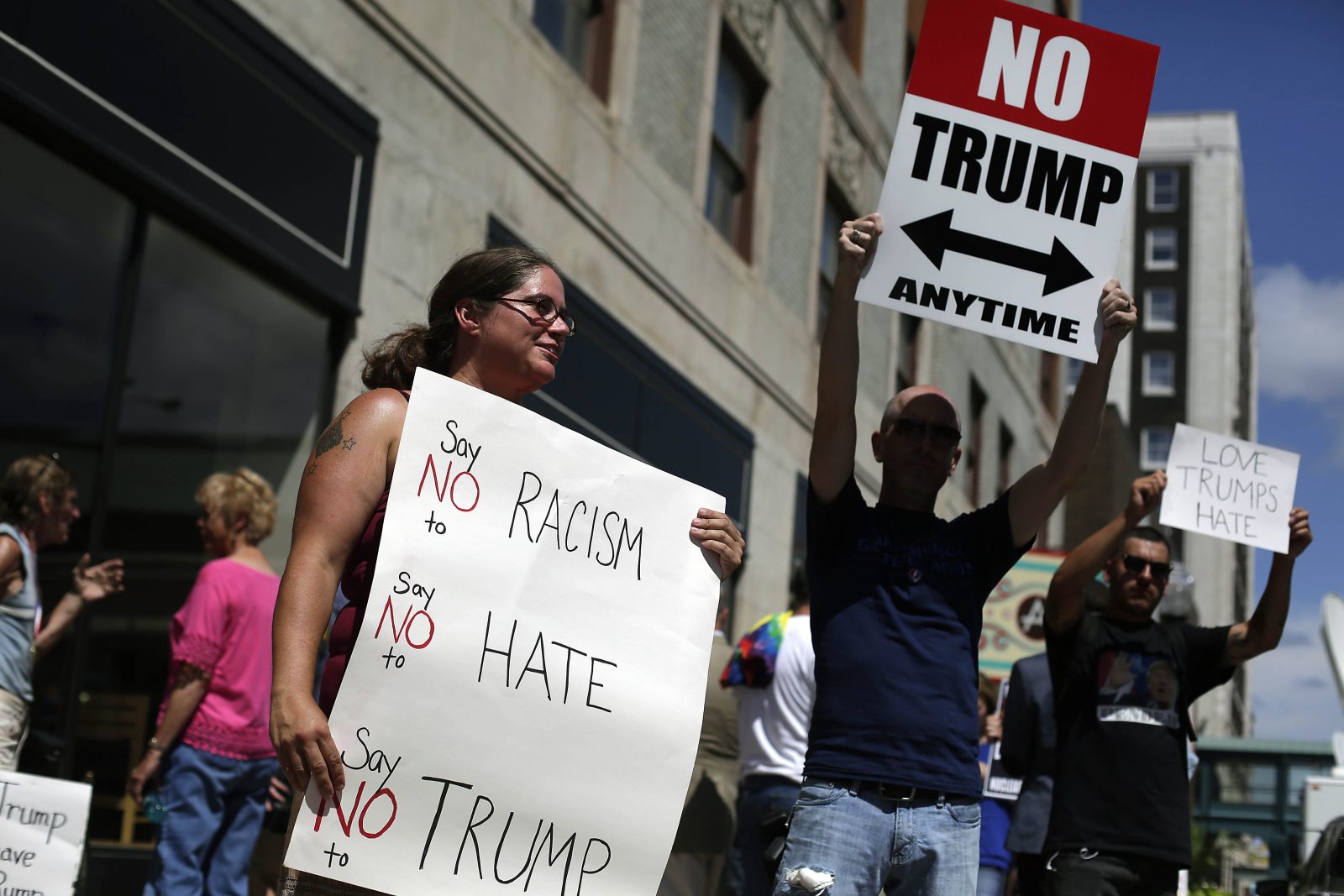 The signs outside a Donald Trump campaign stop in Davenport, Iowa, say it all. (Joshua Lott/Getty Images)

To hear Willie Rosas, the mayor of Dunkirk, tell it, the large Hispanic population of his city doesn’t need any such encouragement. He said local Hispanics are already coming up to the mayor and asking him how they can register to vote for the very first time, all because of Trump.

“What he’s said, it’s going to backfire on him,” said Rosas, an alternate delegate for Hillary Clinton, the opponent of Republican Trump in the November election.

The same might be said for people with disabilities, who also have an outsize role at the Democratic convention and who also seem energized by Trump’s disrespect.

“Donald Trump doesn’t see me, he doesn’t hear me, and he definitely doesn’t think for me,” said disability rights advocate Anastasia Somoza during her presentation before the convention Monday night.

“He’s very ignorant,” she said of Trump. “He doesn’t know what it’s like to have a disability. … People are very upset with what he did. None of us want to vote for him because of this.”

Even Republicans with disabilities are disgusted with Trump and ready to vote for Clinton, Squire said. And those who were apathetic in the past more likely won’t be this time, she said, because there’s already a voter registration effort underway for people with disabilities in Buffalo – all because of Trump.

And how about the Muslims – who, according to Trump, ought to be stopped from immigrating to America?

Those that have been here for generations are outraged, and can’t afford to sit out the election, said Rep. Keith Ellison of Minnesota, the first Muslim elected to Congress.

“Trump, he wants to divide and conquer with his anti-Muslim, anti-Mexican and anti-worker message,” Ellison told the convention on Monday night. “They don’t want us to vote. We must push back. Not voting is not a protest. It’s a surrender.”

And that’s something that Muslim-Americans must not do, said Linda Sarsour, a Muslim who was born and raised in Brooklyn and who served as a delegate for Vermont Sen. Bernie Sanders at the convention.

Many Muslims aren’t exactly thrilled with Hillary Clinton, she said. The Clinton campaign and the Democratic National Committee didn’t do nearly the kind of outreach in Muslim communities that Sanders did, and for activists such as Sarsour, that still stings.

But there’s something that would sting far, far worse, said Sarsour, who predicted a strong Muslim vote for Clinton in the fall.

“We will not allow ourselves to fall to fascism,” she said.