Buffalo and Rochester are separated by just some 60 Thruway miles but there's no proximity when it comes to the state of their golf games.

Meanwhile, Rochester thrives. Two-time state amateur champion Dominic Bozzelli ranks fifth on the Web.Com money list and is assured a PGA Tour card for next season. University of Texas senior Gavin Hall on Wednesday grabbed a three-shot, first-round lead at the Porter Cup. No surprise there. He’s placed inside the tourney’s top 10 four times, including a runner-up finish in 2010 – when he was 15.

University of Louisville senior and reigning state am champ Trevor Sluman, another Pittsford native, sits four shots off Hall’s lead. You might recognize the name. Trevor is the nephew of Rochester native Jeff Sluman, who won the 1988 PGA Championship and finished top five in two other majors.

And yet, in assessing the Rochester scene, Orchard Park’s Jamie Miller says,“Will Thomson, he’s probably got the most potential of any of them.” 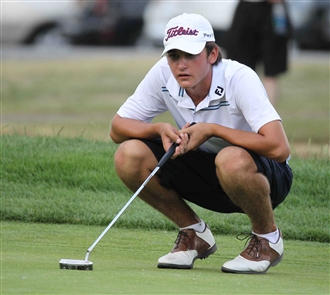 Will Thomson lines up a putt on the ninth hole (James P. McCoy/Buffalo News)

Following the lead of Jason Day

A 7-shot swing from one hole to the next

Thomson, winner of the 2014 International Junior Masters at East Aurora Country Club, is a high school sophomore and already verbally committed to the University of Texas. The big surprise in Wednesday’s Porter Cup was that he struggled, shooting 75.

The question was put to two players from each city following their rounds on Wednesday. Here’s what they had to say:

Gavin Hall: I think f or the most part there’s a lot of great golf courses there. Dominic Bozzelli doesn’t live there anymore, but when we grew up there was a lot of competition and it was mostly a lot of us. Great coaches there, good golf courses, and I feel like there’s always that pedestal – every eight years or 10 years we see a major championship at courses that we usually play.

So (we) have that kind of be our goal. When I was younger I remember going to the 2003 PGA Championship. It’s things like that, they’re in my head, that I keep working for. That’s where I want to be. We’re lucky to have a major championship golf course in our backyard in Oak Hill, and plenty of other ones that host great championships too.

“I think being surrounded by that much golf, that many golf courses with members and high-level tournaments that they host, it’s a great combination for us to play well.

Multiple-time Porter Cup player Nick Morreale of Tonawanda: “I don’t even think I could offer an opinion. I think it’s luck. I mean, they got really good golf courses out there, like world-class golf courses. I don’t think we have anything in Western New York that compares to Oak Hill and a couple other ones out there. But I really don’t know.”

I think they just grow up around amazing golfers, but I guess we do in Western New York too though. We see these guys come through here (at the Porter Cup). I really can’t offer an opinion as to why they’ve been more successful recently, even going back to Jeff Sluman. I don’t know to be honest.

Trevor Sluman: I think it’s how great the golf courses are. I mean, I grew up on Oak Hill, and there’s Irondequoit, CCR, Monroe, Locust Hill. I feel like good golf courses breed good players and we have such good junior programs, too. RDGA is such a great association, holding so many events for everybody. It helps. 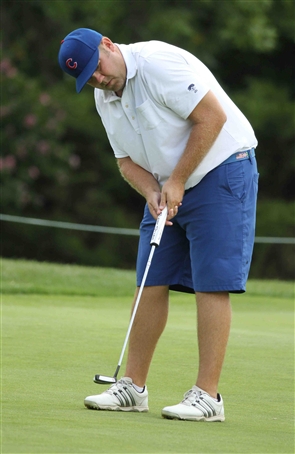 “The RDGA really has a huge effect on us as kids. They do a lot of things for the juniors coming up. I just played in the RDGA a couple weeks ago, played with a kid who’s 14, and you can just tell he’s going to be a good player. You play in these one-day events, all these junior series, and you get better. I feel like that’s a big reason for a lot of the guys in Rochester.

Jamie Miller, 2014 NYS Mid-Amateur champion:  As a whole they have better golf courses, not just one challenging them all the time. They have Oak Hill, Monroe, CCR, Brooklea, really good golf courses, which when you grow up on them it makes it seem easier when you go to a tournament like here.

“Part of it, maybe the history of golf in Rochester. You grow up with the PGA and all that, and the U.S. Open there, and the Ryder Cup, and everybody knows it.

“They are more golf knowledgeable there than we are here. Not a lot, but they are. I think that helps.

I think the history, all of that. In Buffalo, hockey’s huge. The Bills are huge. In Rochester maybe it’s a little different where they’re still big, really big, but it’s not the main focus where here that’s our main focus.

Courses? Culture? There can be no definitive answer. But when it comes to golf Buffalo is two club lengths behind.