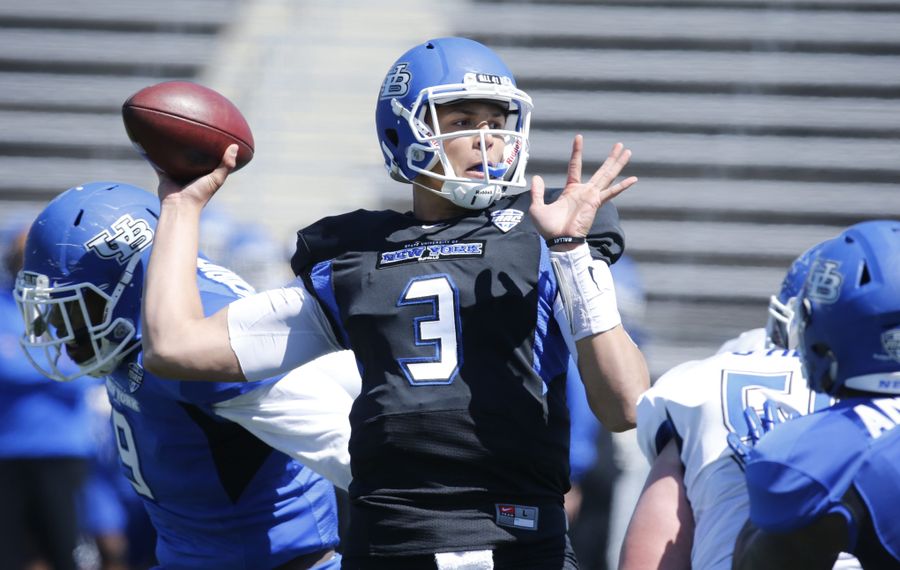 DETROIT – Everyone can see 6-foot-6 quarterback redshirt freshman Tyree Jackson is a prize for the University at Buffalo football program. How fast can he take over?

That’s the question UB will be seeking to answer, coach Lance Leipold acknowledged, when the Bulls start training camp Aug. 7. Jackson will compete with senior Grant Rohach, a transfer from Iowa State, for the starting QB job.

“I think we’re going to be pleased, whichever way it turns out,” Leipold said at the Mid-American Conference Media Day. “What I mean by that is Tyree Jackson has grown an inch since he’s been here. He’s 6-6. He’s almost 240 pounds. Our strength coach says he’s had an outstanding summer. Tyree is going to be an outstanding quarterback.”

UB was picked for fourth out of six in the MAC’s East Division in a media poll released Thursday.

“Grant Rohach knows that,” Leipold said. “Grant has been everything we thought he would be. His maturity, his leadership, his willingness to compete. If he’s the starter, I know his intangibles will help not only our offense but our whole football team. Grant wants to be a coach. He approaches it that way. He wants to play, no doubt. And that was what we got from the Iowa State coaches, what a great leader and teammate he is.”

Rohach, 6-2 and 217, spent last season as the third-stringer at Iowa State. He was a three-star recruit out of high school. He played in seven games and started four in the 2013 season for the Cyclones. He had back-to-back 300-yard games in wins over West Virginia and Kansas and passed for 1,208 yards and eight touchdowns. But Rohach lost the competition for the starting job entering the next season, and he did not attempt a pass in 2015.

Leipold said the state of UB’s offensive line, which essentially is replacing three starters, will be a factor in the quarterback decision.

“We have to get some offensive line answers,” Leipold said. “Do we need to put a redshirt freshman out there, depending on the situation? I think we have more depth on the offensive line. I think they’ll be working with the same type of guys through camp. We’ll see.”

Leipold said he expects to name a starter before UB opens against Albany.

“Somewhere along the week of the first game I’m sure we will,” he said. “I’m not going to be one to say we’ll see who runs out for the first snap.”

The opportunity for a better-than-expected finish exists for UB. The MAC East clearly is the weaker of the two divisions. Four of the MAC’s best five teams are in the West.

Western Michigan, coming off an 8-5 season and a bowl victory, was picked to win the MAC West and claim the overall title. The Broncos have had the top-rated recruiting class in the MAC the past three years.