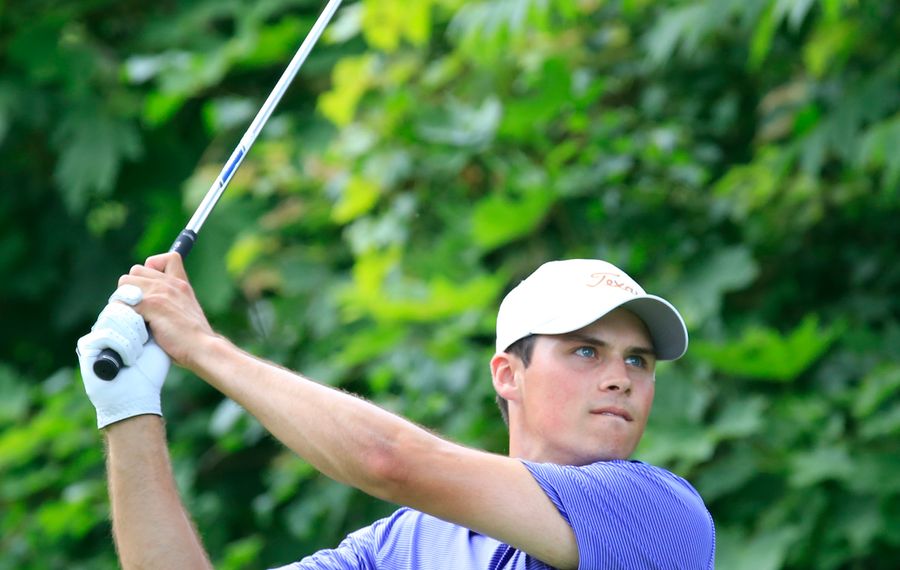 LEWISTON – On Wednesday, it was the front nine.

On Thursday, Gavin Hall feasted on the back nine at Niagara Falls Country Club.

A 4-under 31 on the inward nine during the second round gave Hall a round of 66, getting him to 9-under 131 through 36 holes. That's good for a two-shot lead over Australian Harrison Endycott.

"It was a really good score on the back nine," Hall said. "I had a few bad holes on the front. I made a double bogey. That's kind of the way I've been able to handle myself this year – If I'm making a bad number, I usually can kind bounce back pretty well.

"I'm excited about the weekend and going into these next two rounds."

Hall's double came on the par-5 third hole, which must have felt like a triple on one of the easiest holes on the course. When he bogeyed the par-3 fourth hole, it started to look like his round could go south quickly. But a holed sand shot for birdie on the par-5 fourth hole stopped the bleeding.

"I'm just trying to play the golf course," he said. "It's in such great shape, so I'm just trying to play my type of game, seeing how many birdies I can make out there. Today is perfect scoring conditions. Greens are soft, they're in awesome shape, not as much wind and it's hot, so it's premium for scoring low."

Making his fifth appearance in this tournament, Hall said it feels "kind of like home."

'This is one of my favorite golf tournaments of the year," he said. "It's so close to me, I get a lot of support. ... Just the community of Lewiston – it's been awesome. I really look forward to this week. The next two days are going to be fun."

Coming into the week, Hall said he expected the winning score to be between 14- and 16-under. He's got that well within reach.

"If I get to those numbers, I'll have a pretty good chance at it," he said, "but at the same time, I don't want to hold back, I want to keep playing aggressive and keep firing at pins."